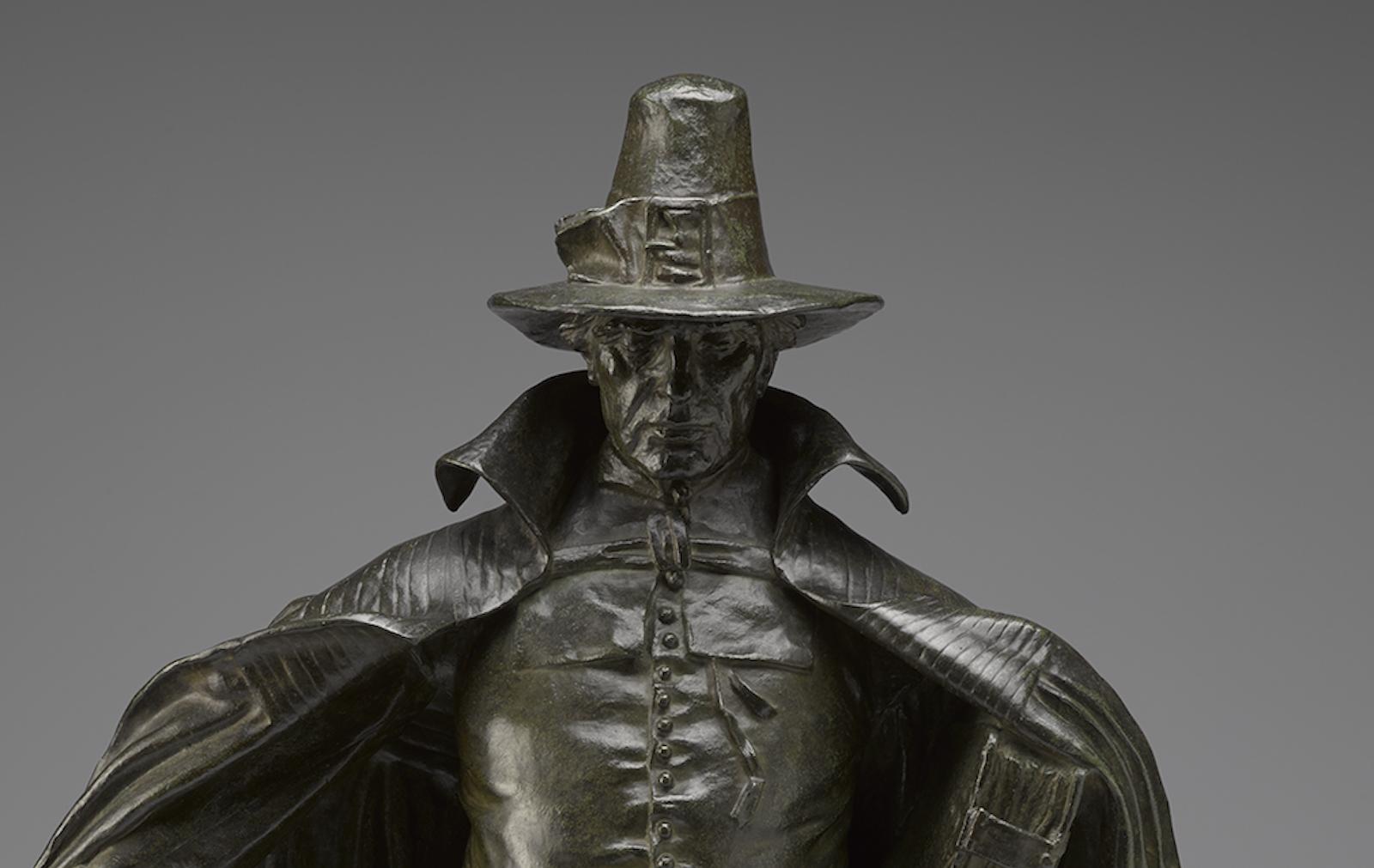 In 1881, nearly a century after the United States defeated Great Britain in 1783, Massachusetts businessman Chester Chapin commissioned a statue to commemorate America’s centennial.

He selected as its subject his ancestor, the Puritan settler and Massachusetts magistrate Samuel Chapin. The elder Chapin, born in 1595 in England, had been one of the New World’s most prominent religious and political figures throughout the 1600s, establishing the Chapins as one of New England’s most prestigious families. 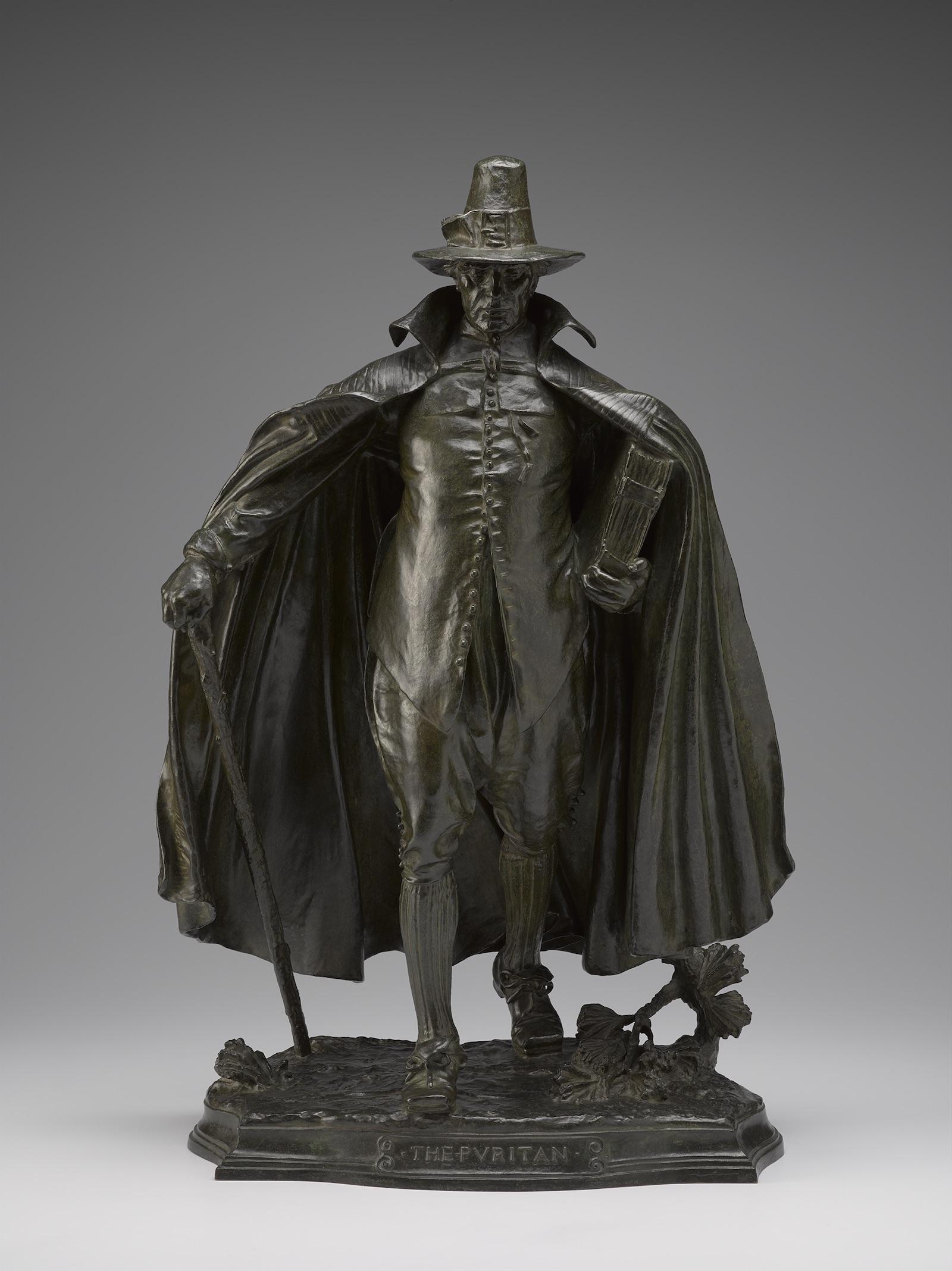 Yet Chester Chapin commissioned not an established, American-born sculptor, but rather the Irish-born, thirty-three-year-old Augustus Saint-Gaudens. The sculptor’s eight-foot-tall statue of Chapin, named The Puritan, was placed in Springfield, MA, where it still stands today.

The larger-than-life statue in Massachusetts became so popular that Saint-Gaudens created dozens of smaller casts beginning in 1886, including the thirty-one-inch-tall version on display at the North Carolina Museum of Art (NCMA) and featured in today’s column.

The historical context of The Puritan is complex: the statue reflects the nascent political system of seventeenth-century New England, the bruised status of the United States at her centennial in the 1880s, and our current climate regarding statues of political figures. 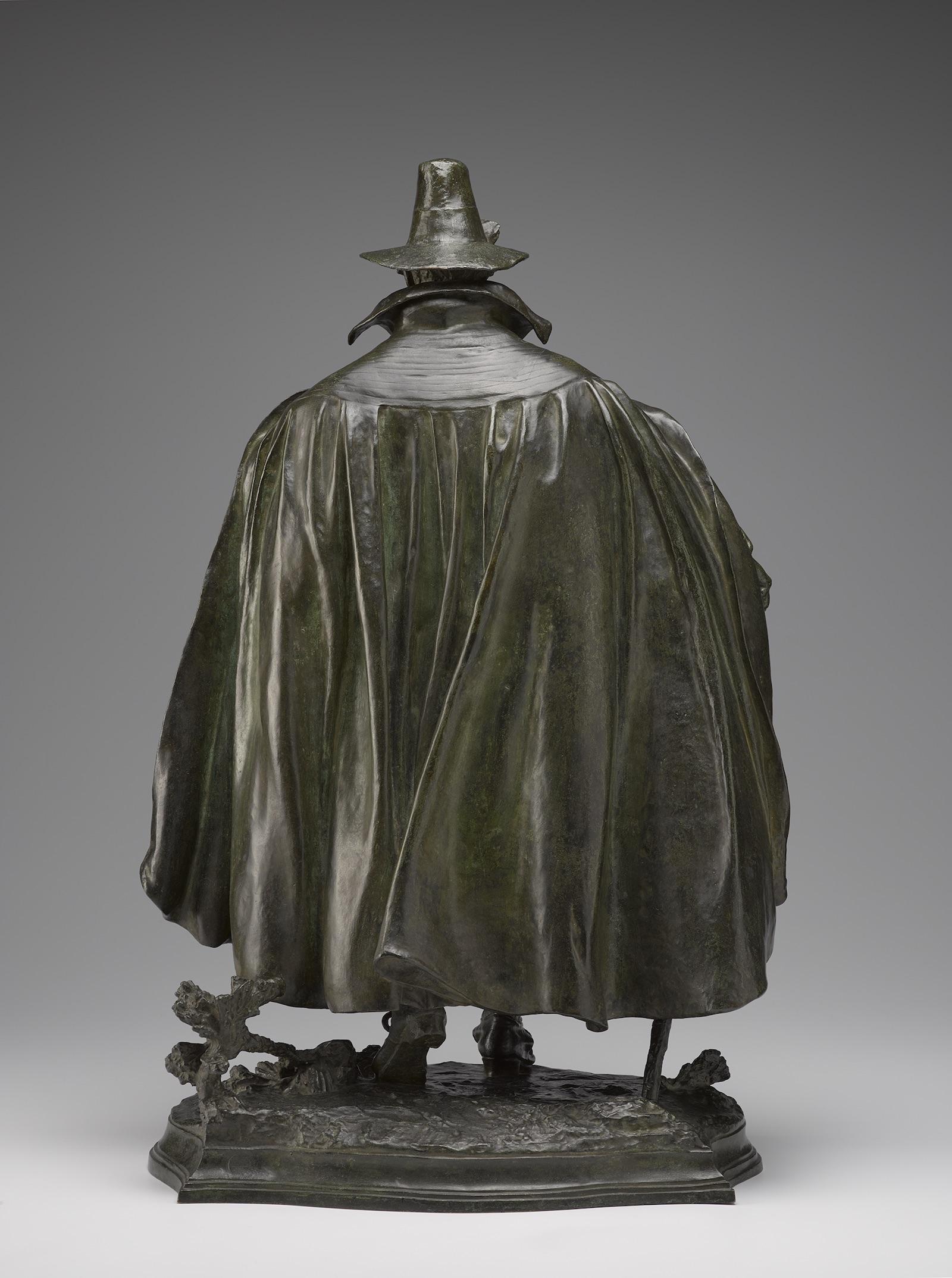 Perhaps Americans 140 years ago were so taken with the statue, purchasing so many smaller versions of the work that scholars have yet to tally the exact number, because the work represented an ideal, an escape from the traumatic reality of the Civil War.

As no drawings or portraits of Samuel Chapin were ever made, Saint-Gaudens fashioned his likeness after “a pastiche of faces” that were more iconic than accurate, notes curator emeritus John Coffey of the NCMA. Indeed, correct lighting of the statue in a museum setting is vital to appreciate the work. Mr. Coffey notes that not only does he allow visitors to see the back of the statue, with Chapin’s billowing cape, but he lights The Puritan as Saint-Gaudens intended, with the shadow cast by Samuel Chapin’s hat covering half of the subject’s face.

It is that last artistic touch that proves most resonant for today’s viewers. Samuel Chapin served simultaneously as a political and religious leader, blurring the boundaries between Church and State before the U.S. Constitution banned such conflicts of interest. It is difficult, with this historical context, to view Chapin’s visage and not ask: which master did he serve more?

Reframed: Thomas Cole’s "The Oxbow"
It is fascinatingly unpredictable how some of the biggest brouhahas among cultural critics can be preserved for history, while others are so quickly lost to time.

Is Vantablack Really the Darkest Color Black?
Manufactured colors seem to have a knack for generating online buzz as well as confusion. Created in 2014, Vantablack has been the subject of headlines for a while and even acted as an integral piece of a 2019 BMW campaign.

Large Monet Water Lilies Sell For $70.4 Million
Sotheby’s blended in-person and digital experiences to execute three sales on the evening of May 12 with stunning results including the five-person bid over a star piece, Claude Monet’s Le Bassin aux nymphéas. 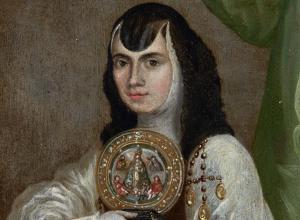 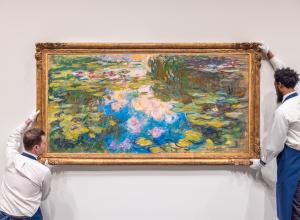