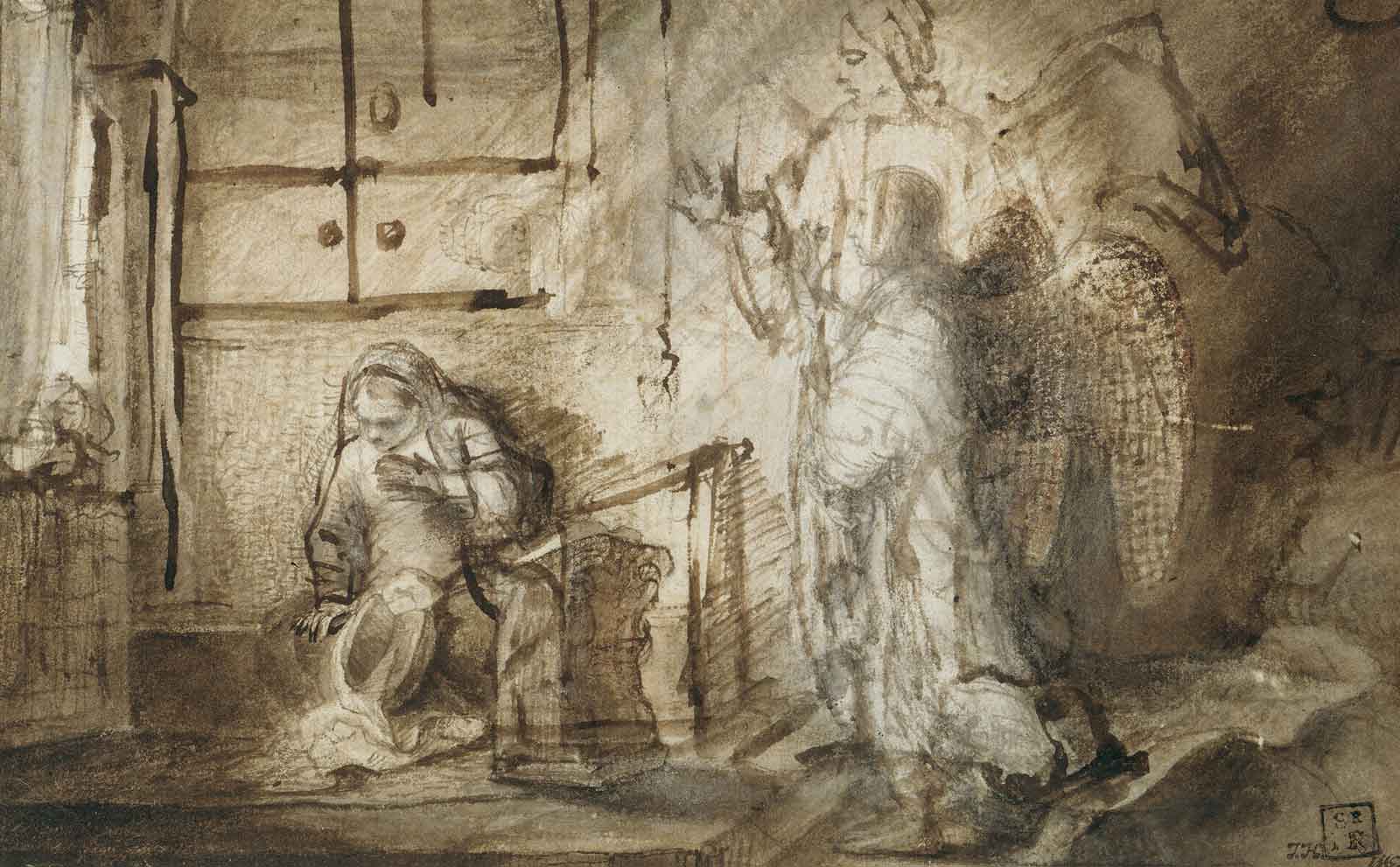 The reattribution of Rembrandt’s drawings 350 years later are revealing new things about the artist and his students. 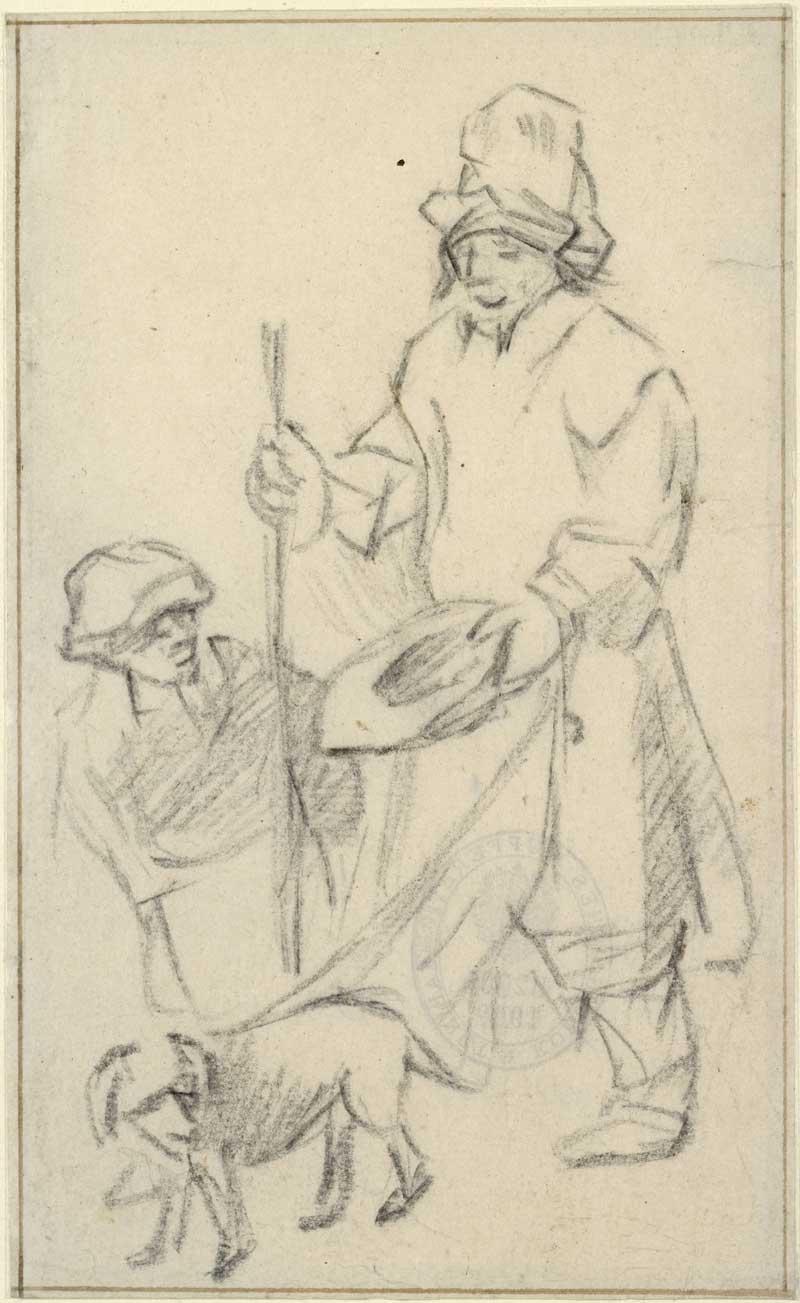 Unattributed copy, A blind beggar with a boy and a dog, late 1640s.

Colleagues persuaded Bevers to include a chalk portrayal of a blind man with a boy and a dog in his 2006 catalogue of Rembrandt’s drawings at the Berlin Museum of Prints and Drawings. But he was never quite convinced the picture was by the master’s hand.

When it’s by one of his students.

More than half the drawings in the 1957 Rembrandt catalogue raisonné by Otto Benesch, the venerated former director of Vienna’s Albertina museum, have in recent years been reattributed to the master’s students and colleagues.

Benesch was by no means the first to get it wrong. The false attribution dates back several centuries, according to Holm Bevers, the interim director of Berlin’s Museum of Prints and Drawings, which harbors one of the most important collections of Rembrandt drawings worldwide. “The confusion has historical roots in Rembrandt’s studio,” Bevers explains.

Rembrandt taught a procession of students between the 1630s and 1660s, of whom about fifty are known by name today. Some were, or went on to become, established artists—Ferdinand Bol, Willem Drost, and Samuel van Hoogstraten, for example. Others, like the city clerk Constantijn Daniel van Renesse, were amateurs lured by Rembrandt’s great reputation.

The students imitated Rembrandt’s style assiduously. They focussed on the same subjects at the same time and took expeditions with him to draw in the open air. After classes, the drawings were organized thematically in albums: landscapes, animal images, and biblical scenes, for example. Some of these drawings—there were as many as 2,000 altogether—entered the market as early as 1658, when Rembrandt went bankrupt and his possessions were auctioned to pay his debts. Others were sold after his death in 1669. Very few were signed, so collectors and dealers no longer knew which were by Rembrandt and which were by his students. Contributing to the muddle, some collectors later added Rembrandt’s signature to the drawings.

Bevers is one of a handful of experts who have been trying to unravel the tangle to establish which were by Rembrandt and which by his students. Similar work has been done by scholars in Amsterdam, Rotterdam, Paris, London, Munich, Leipzig and Dresden. The Berlin Museum of Prints and Drawings “hadn’t really done anything about it since 1957,” Bevers says. “I said we should do something. The question of authorship is an important one.”

The work has yielded important results for Rembrandt scholars. “The image of Rembrandt is much more distinct,” Bevers says. “And we have a clearer picture of the pupils.”

Benesch’s catalogue raisonné featured 126 drawings from the collection of the Museum of Prints and Drawings. Bevers says 53 of these are not by Rembrandt. About 100 of the best drawings by artists from Rembrandt’s circle, some from the collection and others on loan, went on display in Drawings From the Rembrandt School alongside the master’s drawings.

Bevers is the first to admit that determining the hand behind the drawings is not an exact science. “There is no certainty here,” he says. “It is very much a question of opinion. Another generation might revise the attribution again.”

But he and his colleagues at other European museums are “more-or-less of the same opinion,” though they might differ on individual drawings, he says. “Sometimes we see a picture the same way but we interpret it differently. But we are regularly in contact, we send emails and photos, and we speak on the phone. Sometimes we travel together to look at something.”

Colleagues persuaded Bevers to include a chalk portrayal of a blind man with a boy and a dog in his 2006 catalogue of Rembrandt’s drawings at the Berlin Museum of Prints and Drawings. But he was never quite convinced the picture was by the master’s hand. There was something about the chalk strokes on the sleeves and coat skirt of the blind man that seemed too abrupt. 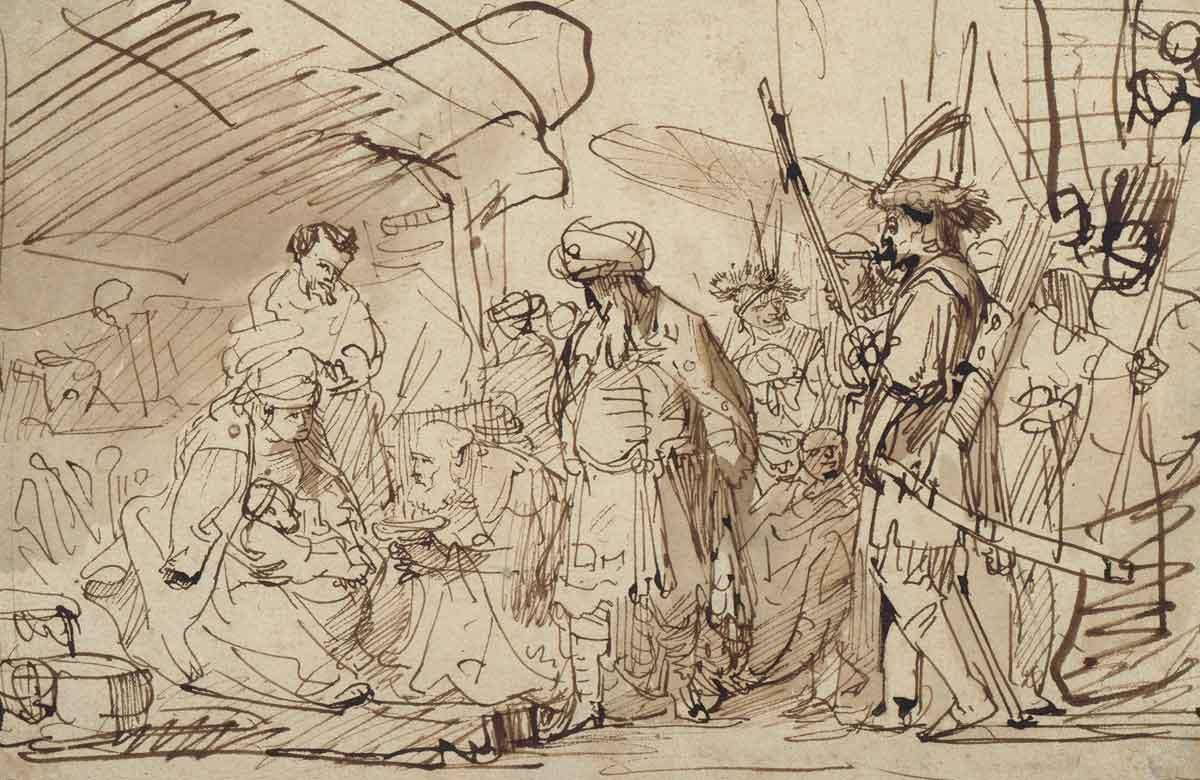 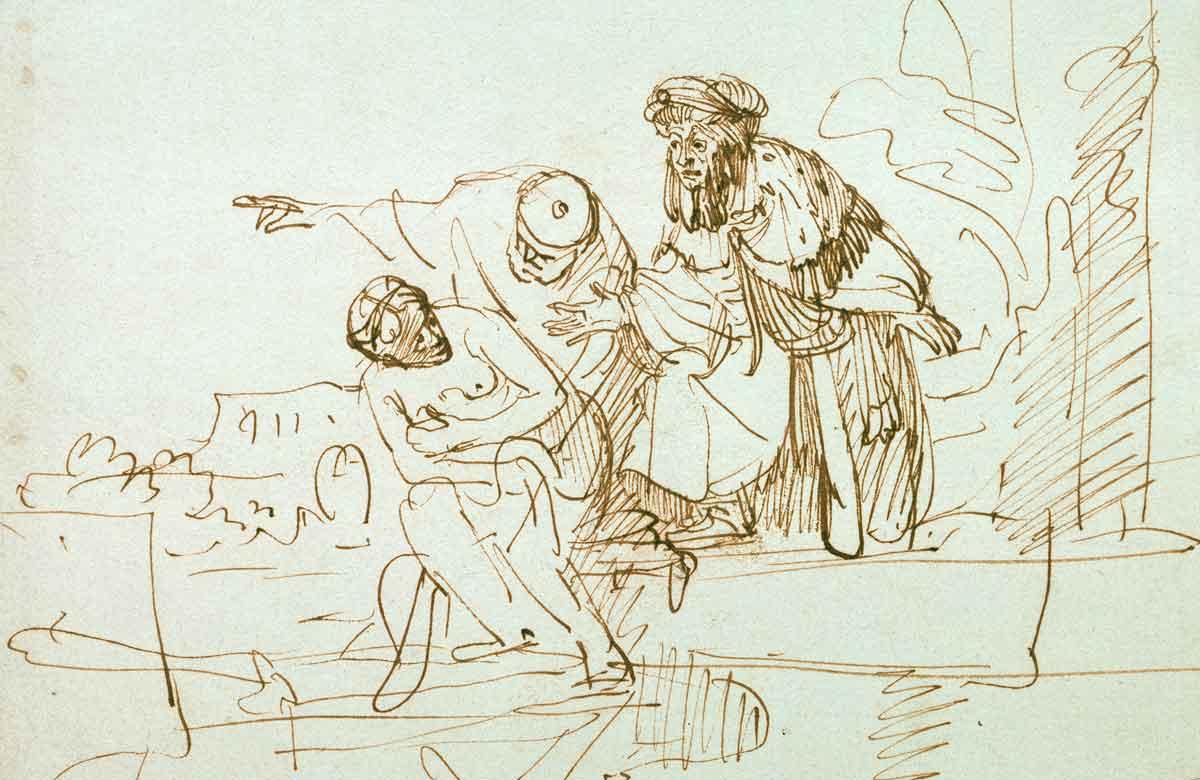 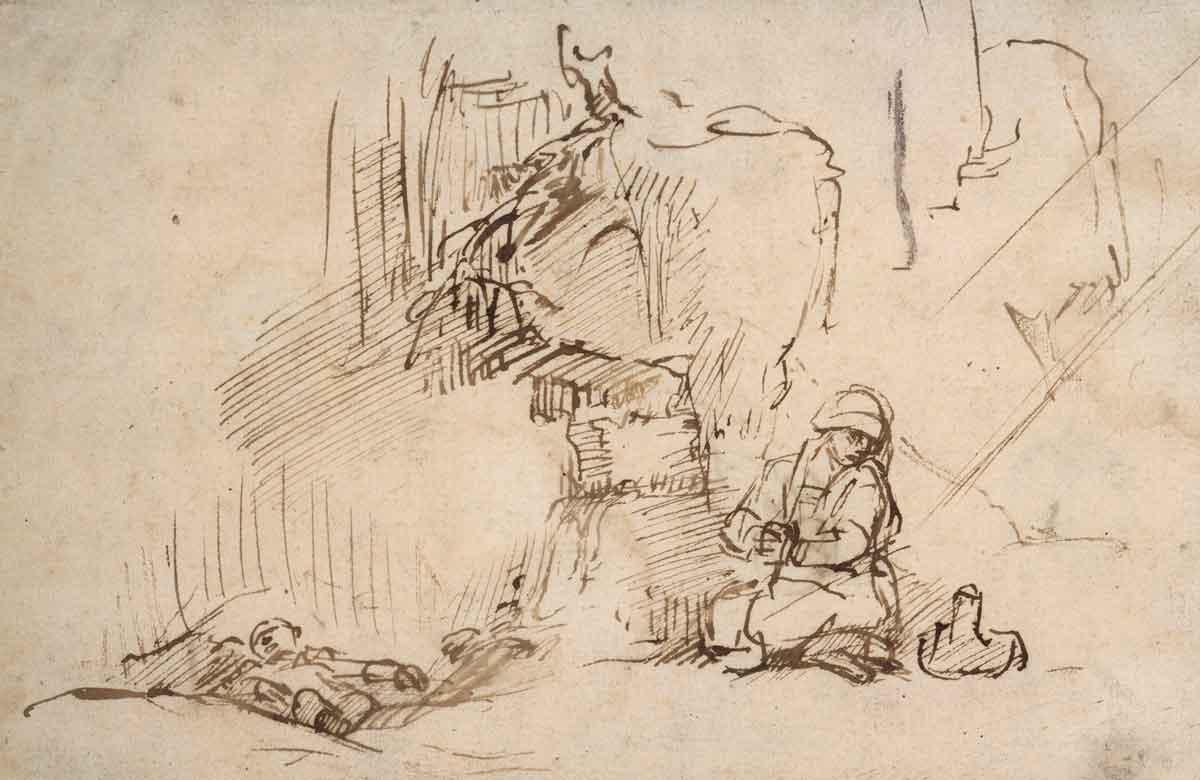 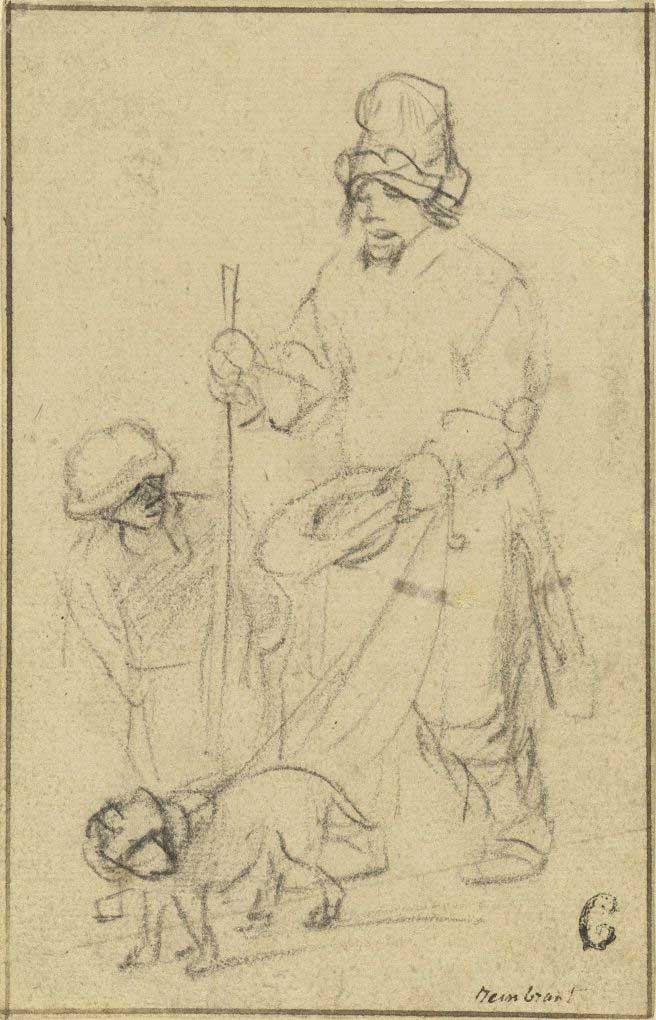 Rembrandt Harmensz. van Rijn, A blind beggar with a boy and a dog, late 1640s.

“My instincts were proven right,” he says. The Rembrandt original, from which the museum’s drawing was copied in one of the artist’s classes, surfaced in 2012 at auction at Christie’s in London. “It is much better than ours in every respect,” Bevers says.

Clues to whether the drawings are by Rembrandt or his students lie primarily in the stroke of the pen or chalk, Bevers says. “Rembrandt’s pen strokes are much more nuanced. He used a finer nib for the background and a broader one for the foreground. A student can copy Rembrandt’s strokes quite precisely, but not the authentic movement of Rembrandt’s hand guiding a pen or chalk on paper.” Other clues include details like ears, mouths or feet.

Even more complex is the task of working out which of Rembrandt’s students was responsible for a drawing once it has been ruled out as a work by the master. Not all of them can be reattributed, and some of the works in the exhibition are labeled as by unknown artists.

But in other cases, a clearer image of an artist has emerged through Bevers’ research. A handful of drawings in the Berlin collection once presumed to be Rembrandt’s have now been reattributed to Anthonie van Borssom, a little-known artist who specialized in landscapes and is thought to have been a student of Rembrandt’s in the late 1640s and early 1650s.

“Suddenly, we have an oeuvre,” Bevers said. “It’s exciting. He is not a great name but it’s still fascinating.”

Bevers’ research has also given insights into Rembrandt’s studio. We can imagine the master standing over his students, clutching his pen impatiently. His corrections are clearly visible over a gentle chalk drawing of the annunciation by van Renesse. Rembrandt added a couple of feet to the height of Renesse’s angel, transforming it from a timid-looking, polite figure into a transcendent, terrifying apparition. The angle at which Mary turns away in fright is sharpened. The hand of the genius pumps up the drama to top volume, transforming the drawing with just a few confident strokes of the pen.