The Art of the Political Cartoon:
A Vital, Vanishing Form 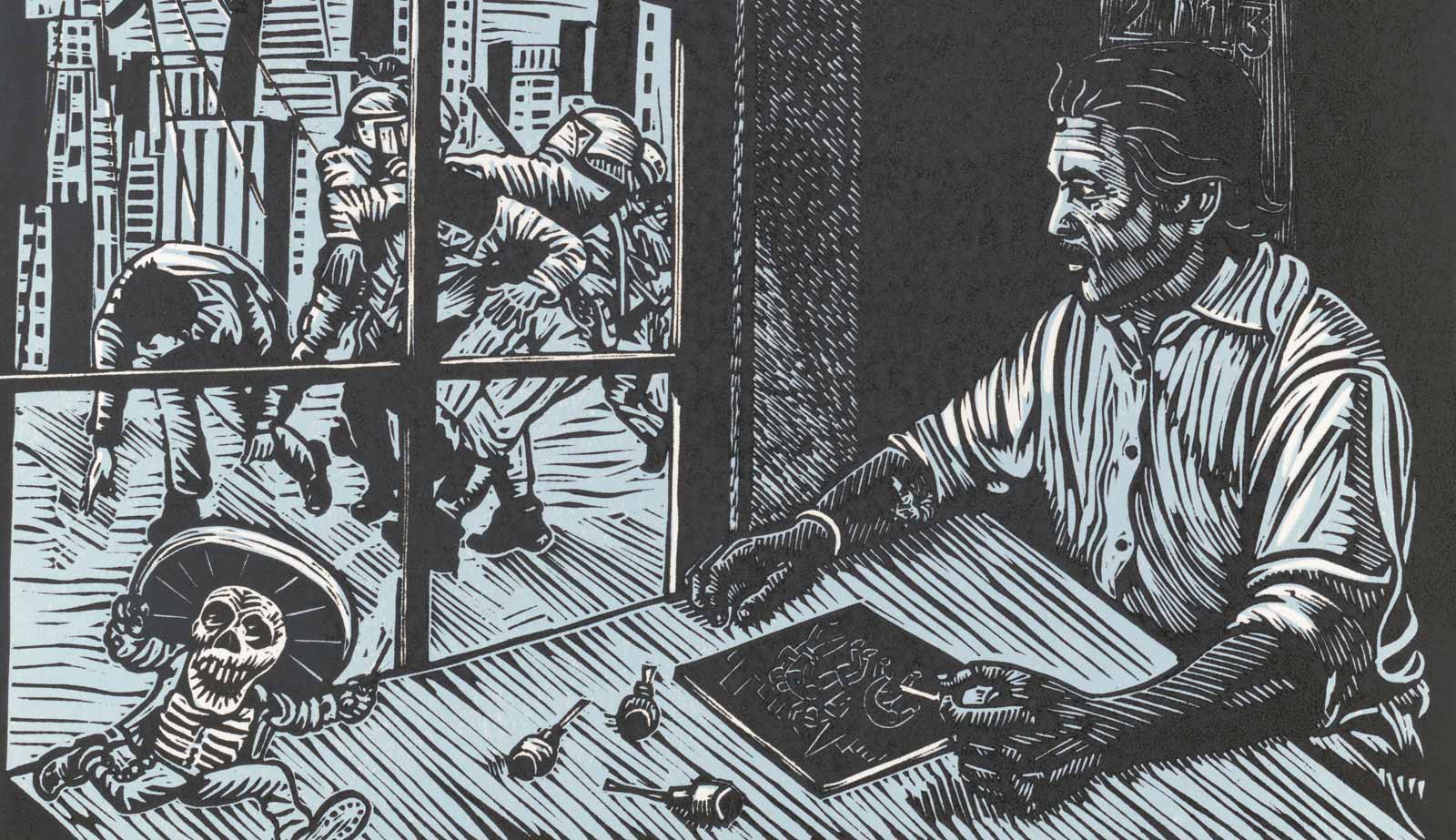 Prints and Photographs Division, Library of Congress. © Juan Fuentes
Juan Fuentes (b. 1950), Posada y Yo, 2013. Linocut.
Even as traditional outlets for it shrink, socially conscious art and the desire to make it remain as strong as ever.

Even as traditional outlets for it shrink, socially conscious art and the desire to make it remain as strong as ever. 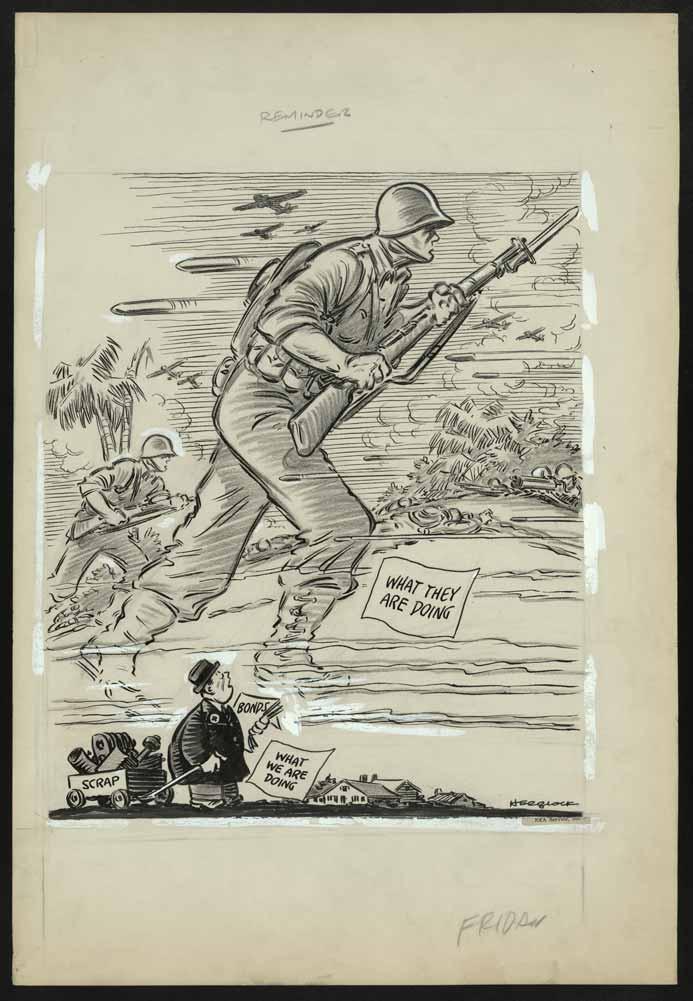 Herblock enjoyed the kind of career that’s fading away in the gig economy: He worked for nearly seventy years, fifty-five of them at the Post. During his time there, he landed three Pulitzers and shared a fourth for the paper’s coverage of Watergate.

Despite an abundance of controversial topics to comment on, America’s editorial cartoonists have had a rough time lately. In January 2019, the Gannett-owned Arizona Republic newspaper axed Steve Benson, the Pulitzer Prize-winning cartoonist whose sharp sketches had livened up its pages for almost forty years.

As Michael Cavna wrote in the Washington Post, Benson joined a cadre of high-profile staff cartoonists laid off in recent years, as the newspapers that employed them have faced declining revenues and rising pressure from owners who care more about profit than content. Other recent casualties include Rob Rogers of the Pittsburgh Post-Gazette, Charlie Daniel at the Knoxville News-Sentinel, and Nick Anderson of the Houston Chronicle. “This is a worrisome trend,” Benson told Cavna. “Cartoonists are canaries in the coal mine—and we draw darned good canaries. This is a foreshadowing of more to come.”

The problem has never been a shortage of material. The Trump era has given artists an excess of subjects to sharpen their pens on. And while the digital era has disrupted some channels artists once used to distribute their work—newspapers, for instance—it has also made it possible to make and distribute art more widely. Artists now share their output via grassroots networks and social media instead of via print media.

Art in Action packed a surprisingly large amount of socially conscious art into a space the size of a railway car. The seventy-year career of the American political cartoonist known as Herblock—Herbert L. Block (1901-2001)—gave Art in Action a series of reference points around which to organize the work of other artists, past and present.

The choice of Herblock was partly an institutional one: The Library holds some 14,000 of the cartoonist’s ink and graphite drawings, many of them from his multi-decade career at The Washington Post, as well as his papers.

Herblock enjoyed the kind of career that’s fading away in the gig economy: He worked for nearly seventy years, fifty-five of them at the Post. During his time there, he landed three Pulitzers and shared a fourth for the paper’s coverage of Watergate.

The subjects Herblock returned to again and again—corrupt politicians, the fight for civil rights, the costs of war, threats to human health and the environment—still drive socially conscious artists at work today. Art in Action organized clusters of works around those major themes. Each grouping includes a Herblock cartoon flanked by older and newer works.

A photo of Herblock in tie and shirtsleeves, brush in hand as he finishes a drawing, connects him directly to the workaday world of newspaper deadlines. But working artists without steady salaries and press credentials also have a long history of rolling up their sleeves to document turmoil and catastrophe. Think of Picasso and his anti-war masterwork Guernica. It forms one link in a chain of anti-war commentary that stretches back centuries to works such as Jacques Callot’s Miseries of War—the war in question being the Thirty Years’ War of the seventeenth century.

Herblock and Picasso don’t often occupy the same artistic space, but the cartoonist marked the painter’s passing in 1973 with a bittersweet image. A sense of shared mission connects socially conscious artists working in different media and eras. 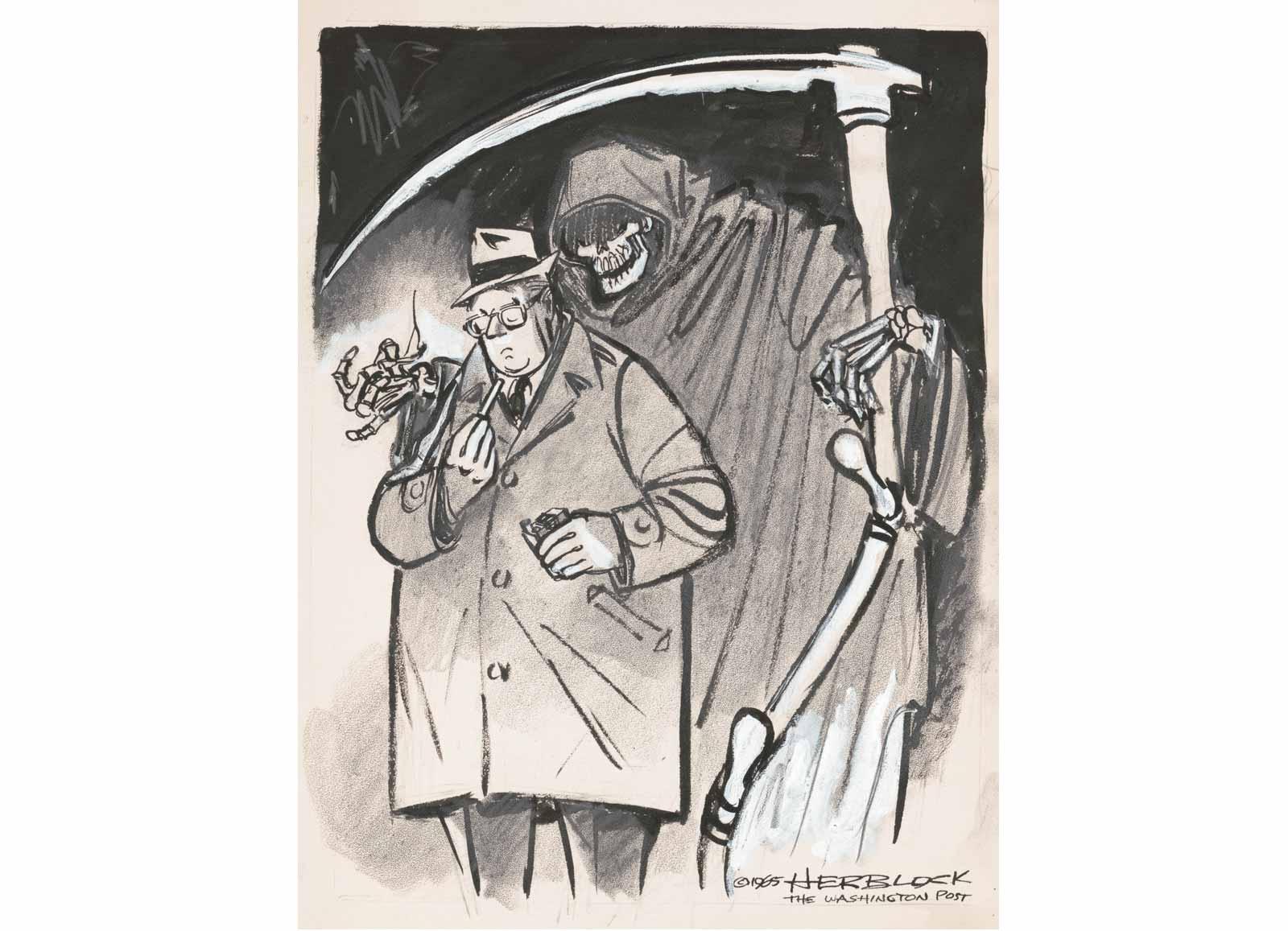 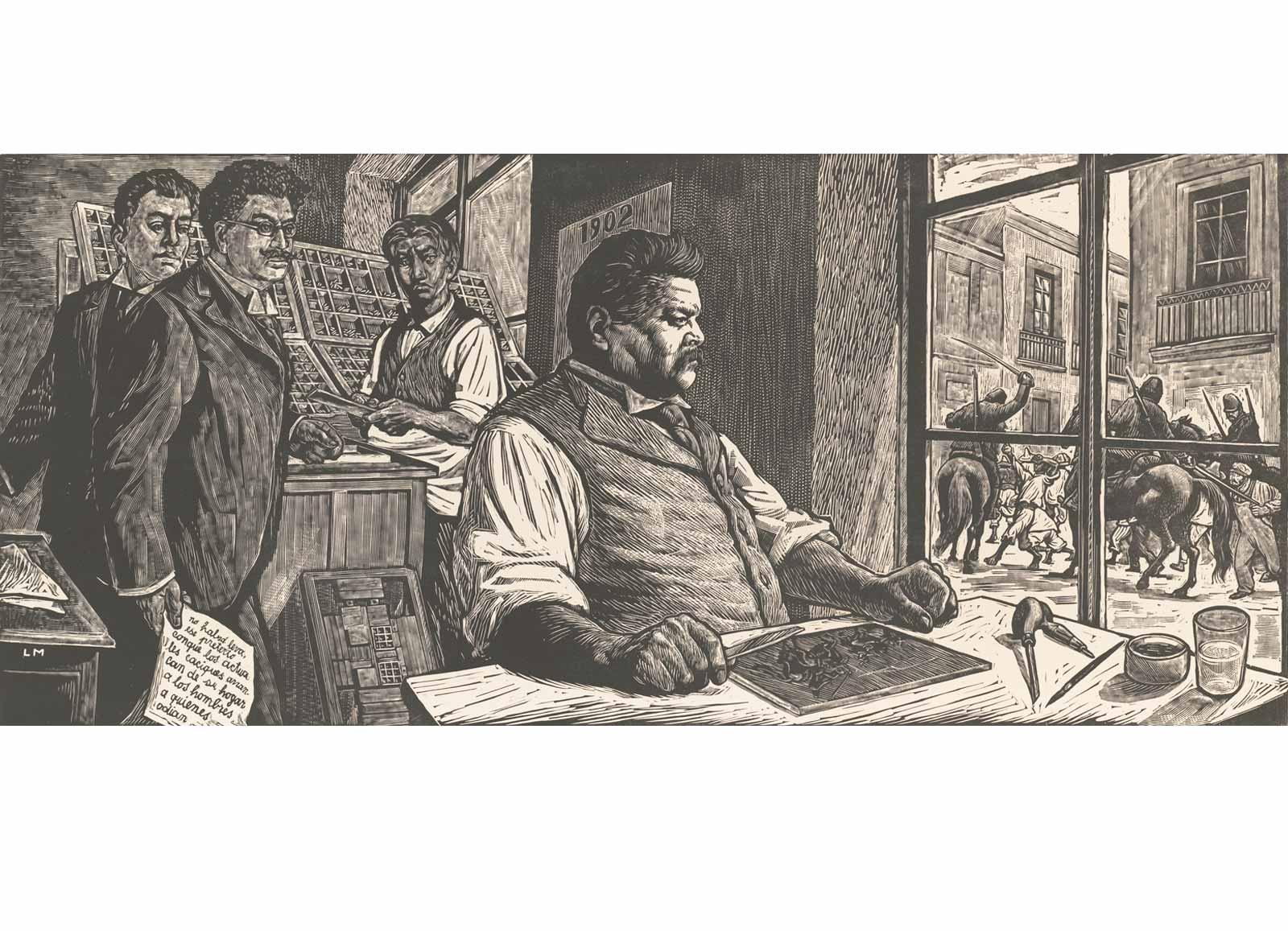 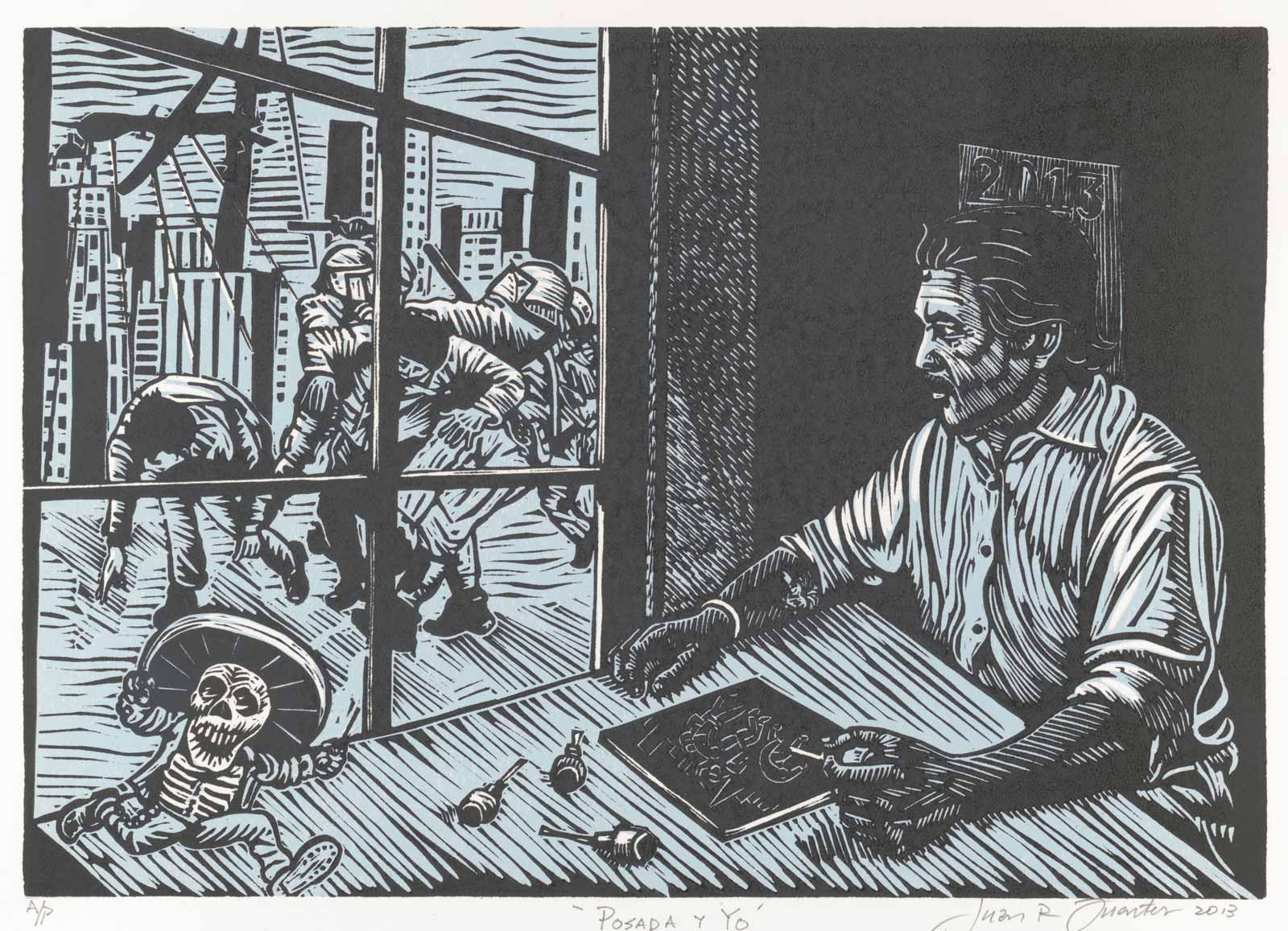 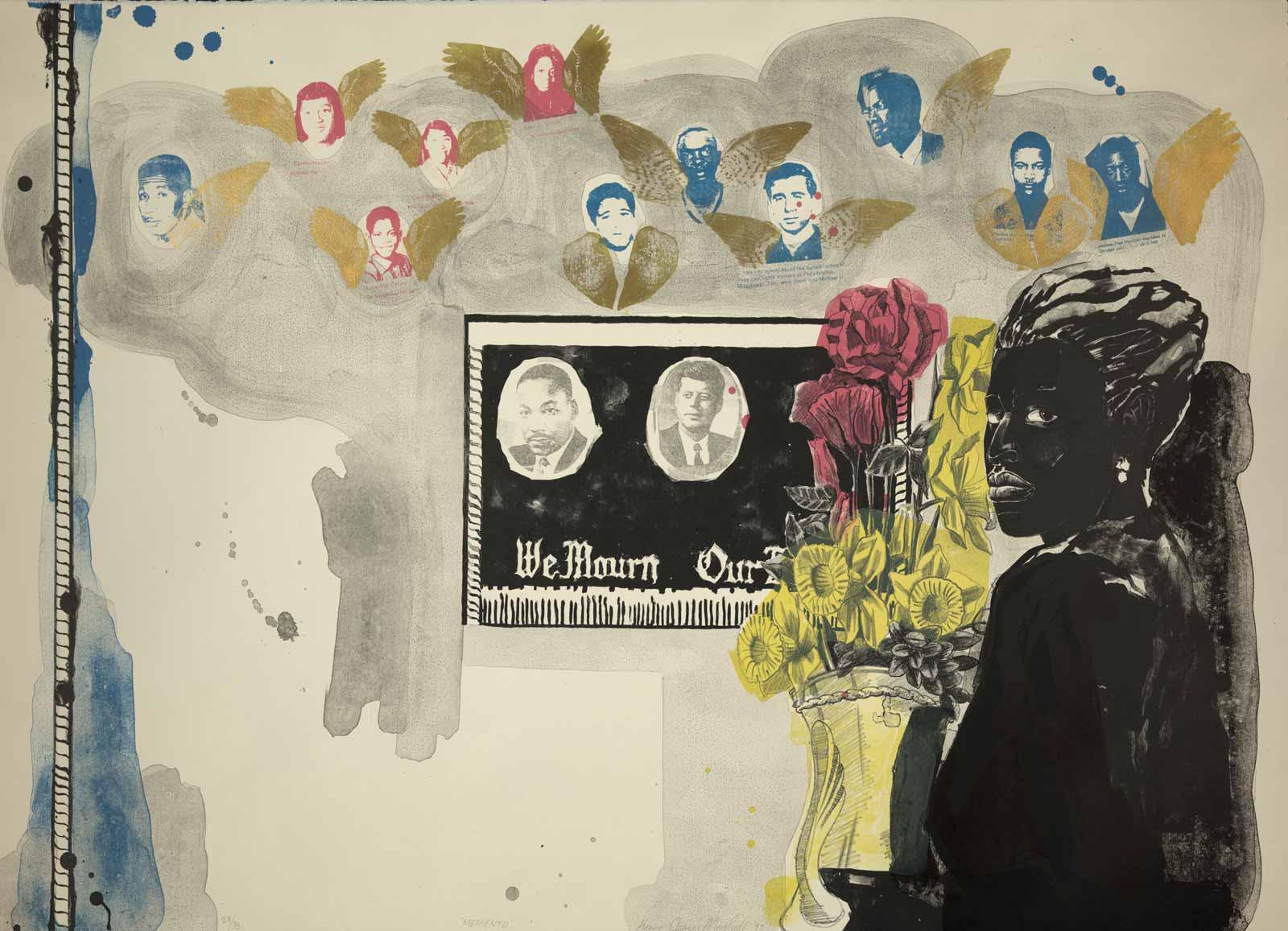 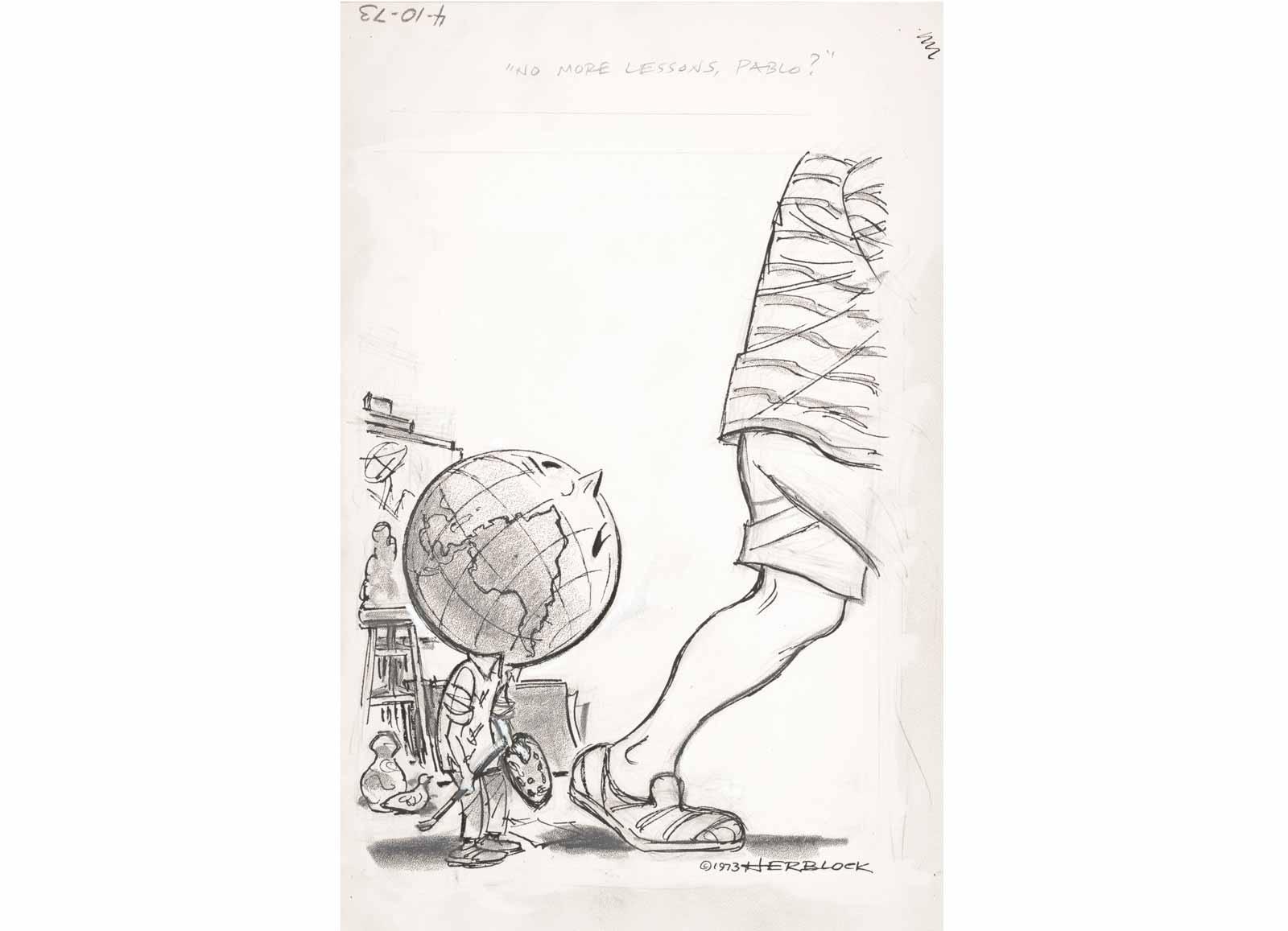 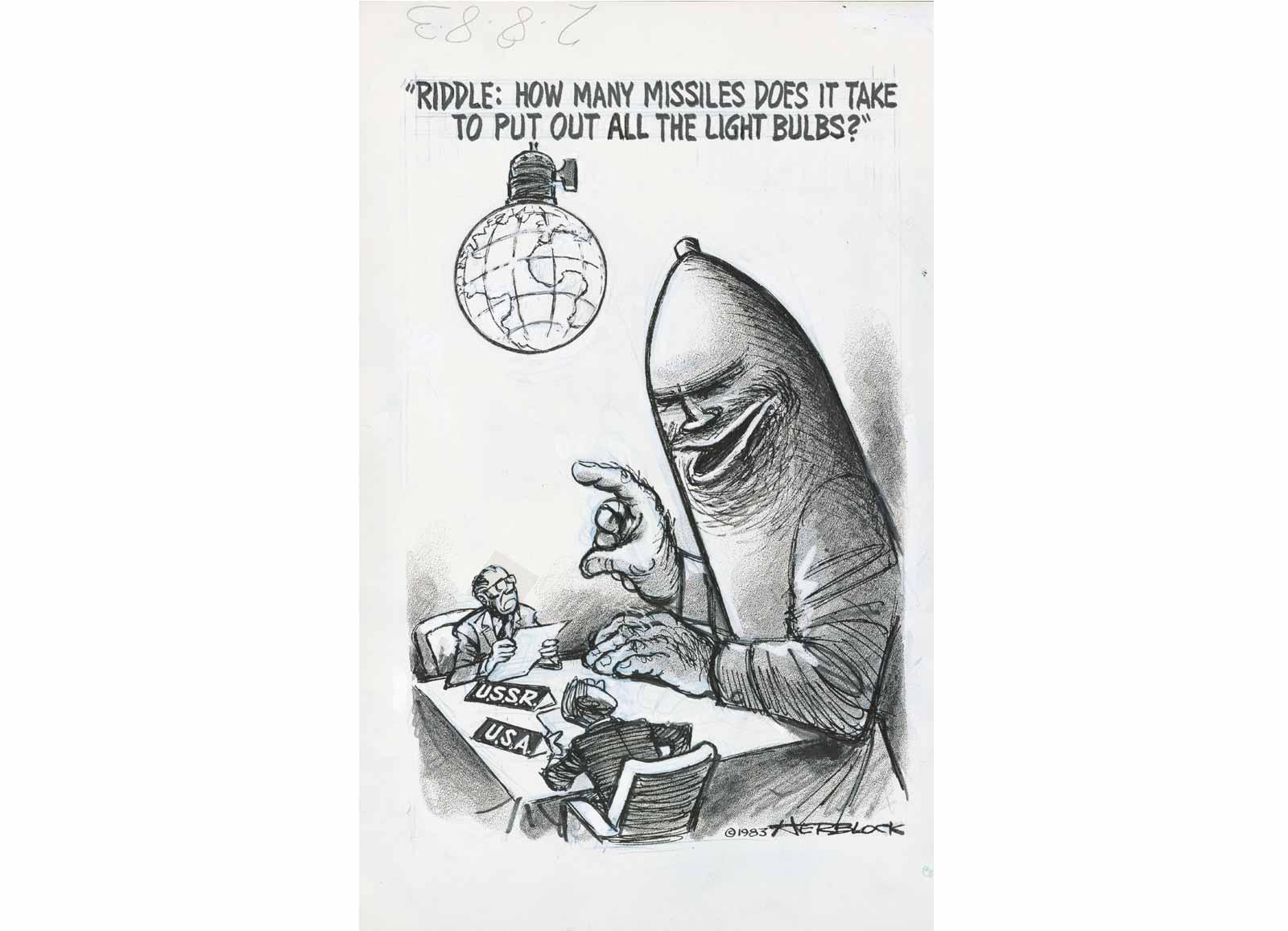 Herblock (1909–2001), “Riddle: How Many Missiles Does it Take to Put Out All the Light Bulbs?,” 1983. Crayon, graphite, India ink, opaque white, and porous point pen with overlays over blue pencil underdrawing. Published in the Washington Post, February 8, 1983. 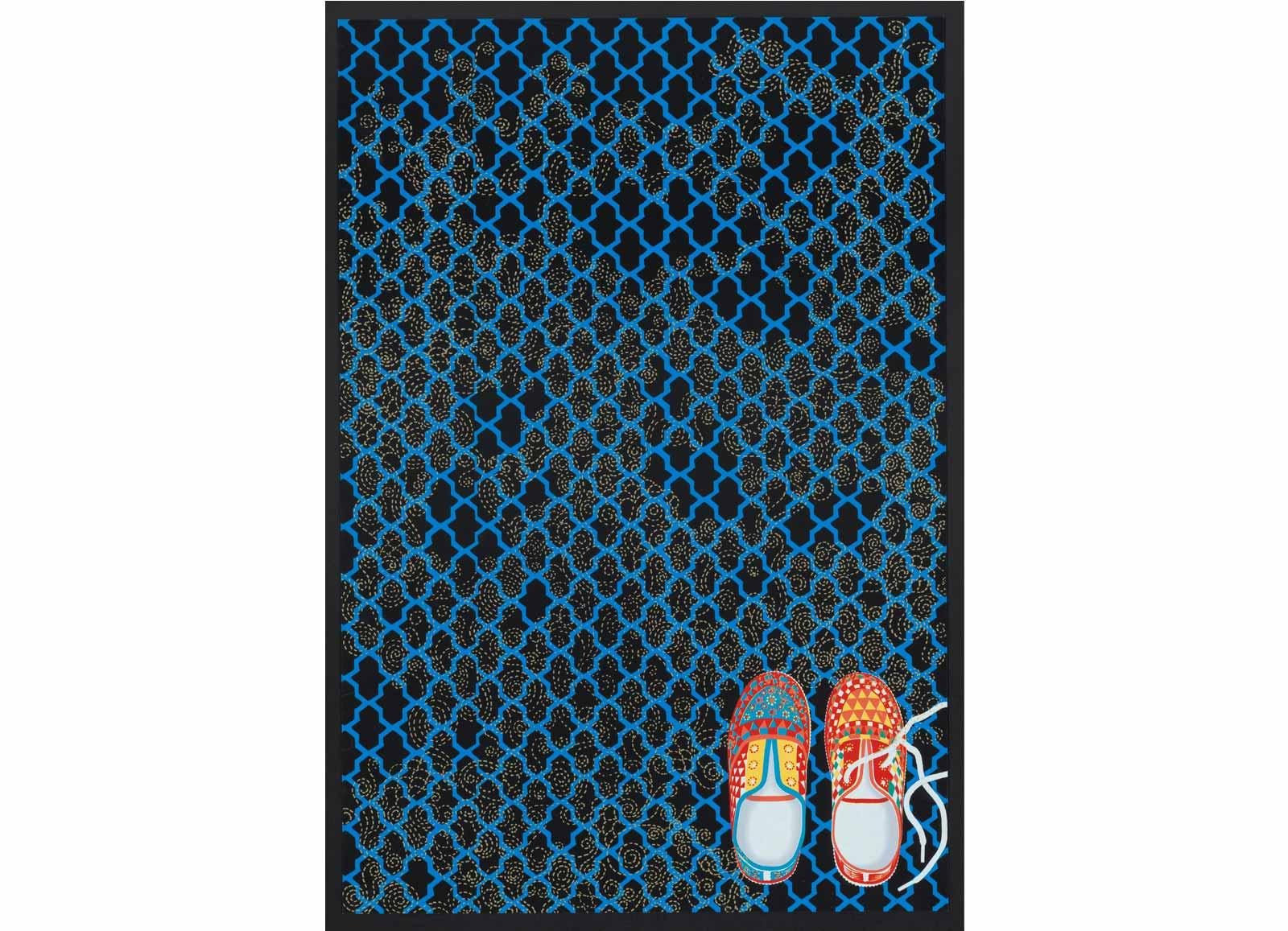 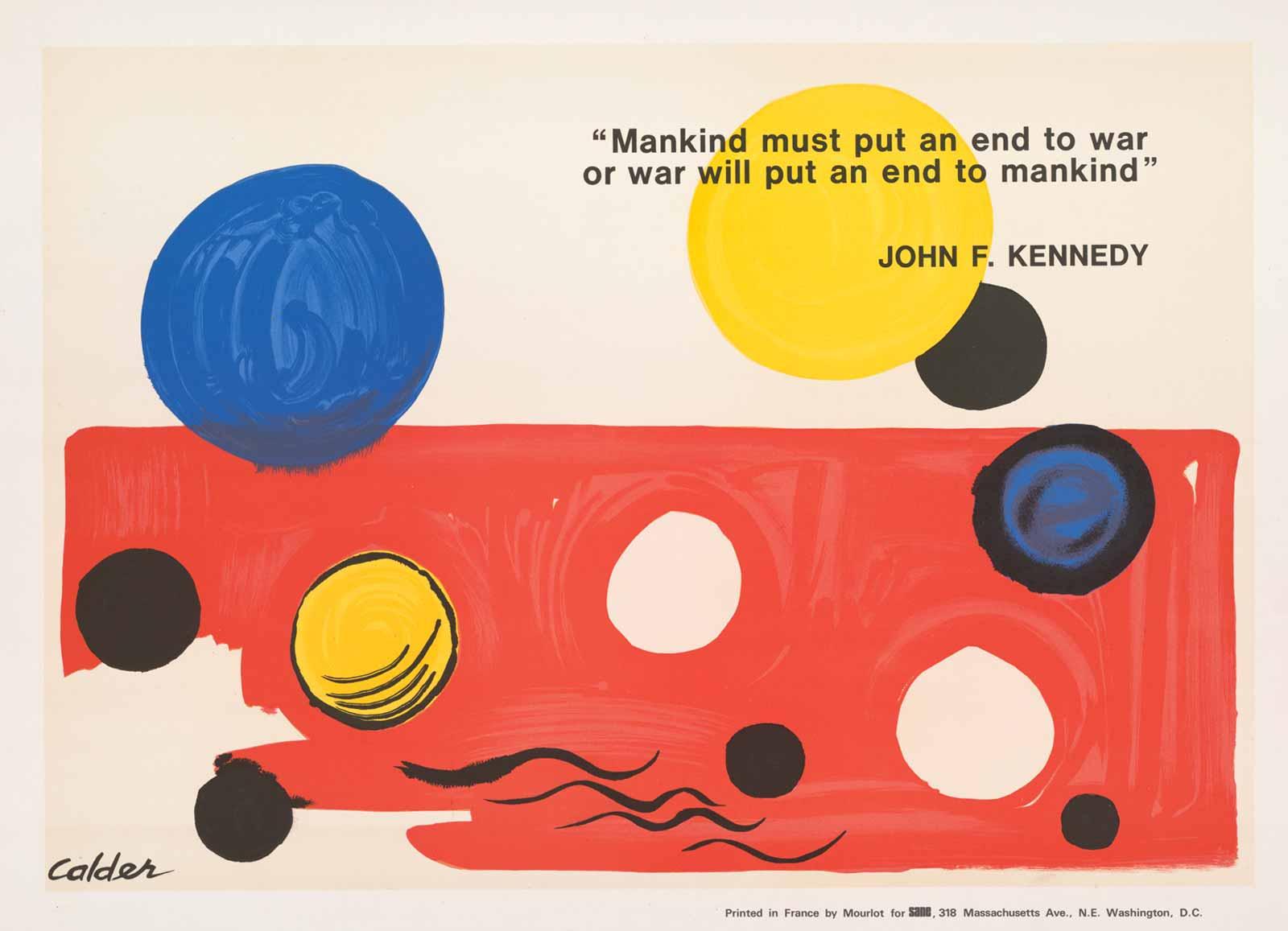 In 1953, Leopoldo Méndez paid tribute to Mexican printmaker José Guadalupe Posada, born a hundred years earlier. Méndez pictured Posada, again in shirtsleeves, about to capture in woodblock the atrocity unfolding in the street outside his studio as soldiers assault unarmed peasants. That art-in-action scene inspired an artist working now, Juan Fuentes, to create another tribute, Posada Y Yo (Posada and Me). Police in riot gear replace soldiers with clubs, but the theme of brutality carries through from era to era.

These artists not only shout out to each other across time, they borrow each other’s visual iconography. Herblock’s bony Grim Reaper lighting the cigarette of a smoker is second cousin to the calaveras—depictions of human skulls—in Fuentes’s Posada Y Yo and in Enrique Chaboya’s 1998 Return of the Macrobiotic Cannibal, a mash-up of pre-Columbian and American pop-culture images, including Superman and Donald Duck.

Sometimes the burden of current events becomes too much to bear. The toll of World War I, including the loss of her son, led Käthe Kollwitz to create a woodcut self-portrait, her face ravaged by grief. Kerry James Marshall’s Memento foregrounds a mourner who gazes sternly outward, bearing witness to lives sacrificed in the upheavals of the 1960s. A Herblock-like caption is not always needed to get the point across.

Today’s socially conscious cartoonists and illustrators draw on born-digital materials and approaches to get their point across. Shepard Fairey’s Portrait of a Teacher, one of the indelible images of the Women’s March, began life as a photographic portrait of educator Maribel Valdez Gonzalez by Arlene Mejorado, a San Antonio-based photographer.

Fairey adapted the original into an eye-catching poster saturated in blue and red. The design lab Amplifier turned Fairey’s teacher, along with other now-iconic portraits made for the 2017 Women’s March, into free digital files for noncommercial use. Those files, shared via the internet, were designed to be printed out and carried as placards. Such images move commentary off the editorial pages and closer to both street art and fine art.

Big public events such as the Women’s March have pushed the Library of Congress to be bolder in collecting born-digital materials, and to focus on artwork that circulates at street level too. The Library’s conservators “frightened us a little bit at first” because of the challenges of capturing and preserving born-digital works, says Katherine L. Blood, Curator of Fine Prints in the Library’s Prints & Photographs Division. “But we also have to dive in at some point, because this is what is happening.”

Blood adds, “This is how artists are expressing themselves, and we have to follow that.”

Jennifer Howard is a writer and editor based in Washington, DC. A former senior reporter for The Chronicle of Higher Education and a former contributing editor for The Washington Post, she has written for Fine Books & Collections, Slate, EdSurge, Humanities magazine, Bookforum, and many other venues. Follow her on Twitter @JenHoward.