The Life and Art of Edgar Degas 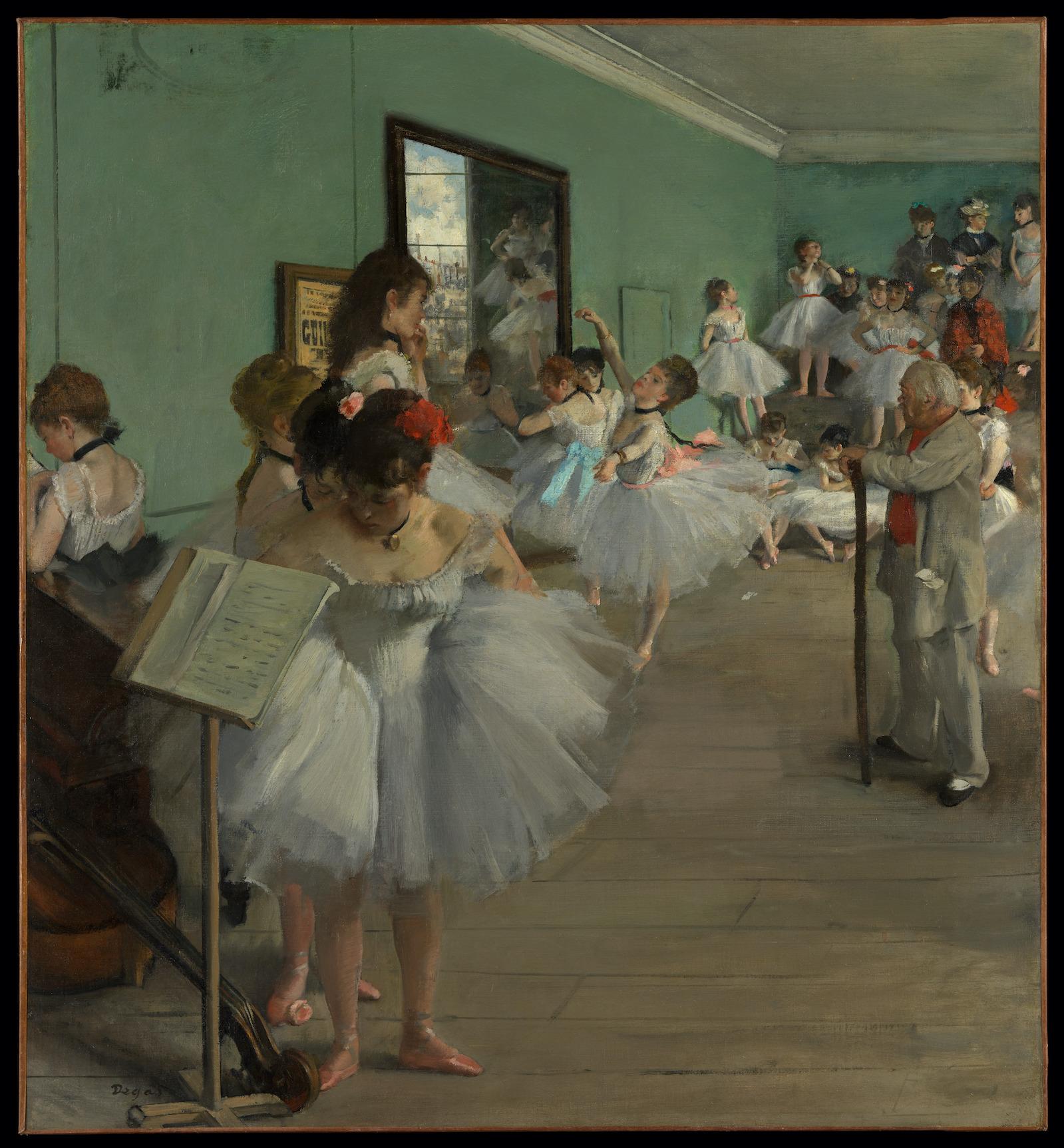 Considered a founder of Impressionism, French artist Edgar Degas (1834-1917) disliked the term and preferred to be called a Realist or an Independent. The oldest son of a French banker and a privileged Creole socialite from New Orleans, Degas showed considerable artistic skill from a young age. Born in Paris as Hilaire-Germain-Edgar De Gas, Degas reverted to a supposedly less pretentious original spelling of his last name as an adult. Primarily known for his paintings and bronze sculptures, Degas was also a printmaker and photographer.

Fascinated by movement and the physicality of his subjects, Degas gained fame portraying dancers, bathing women, and the horse racing world. He captured seemingly awkward, everyday moments, focusing on the athletic stretch, kinetic leap, the bored backstage pose, and the cumbersome shift in the tub. 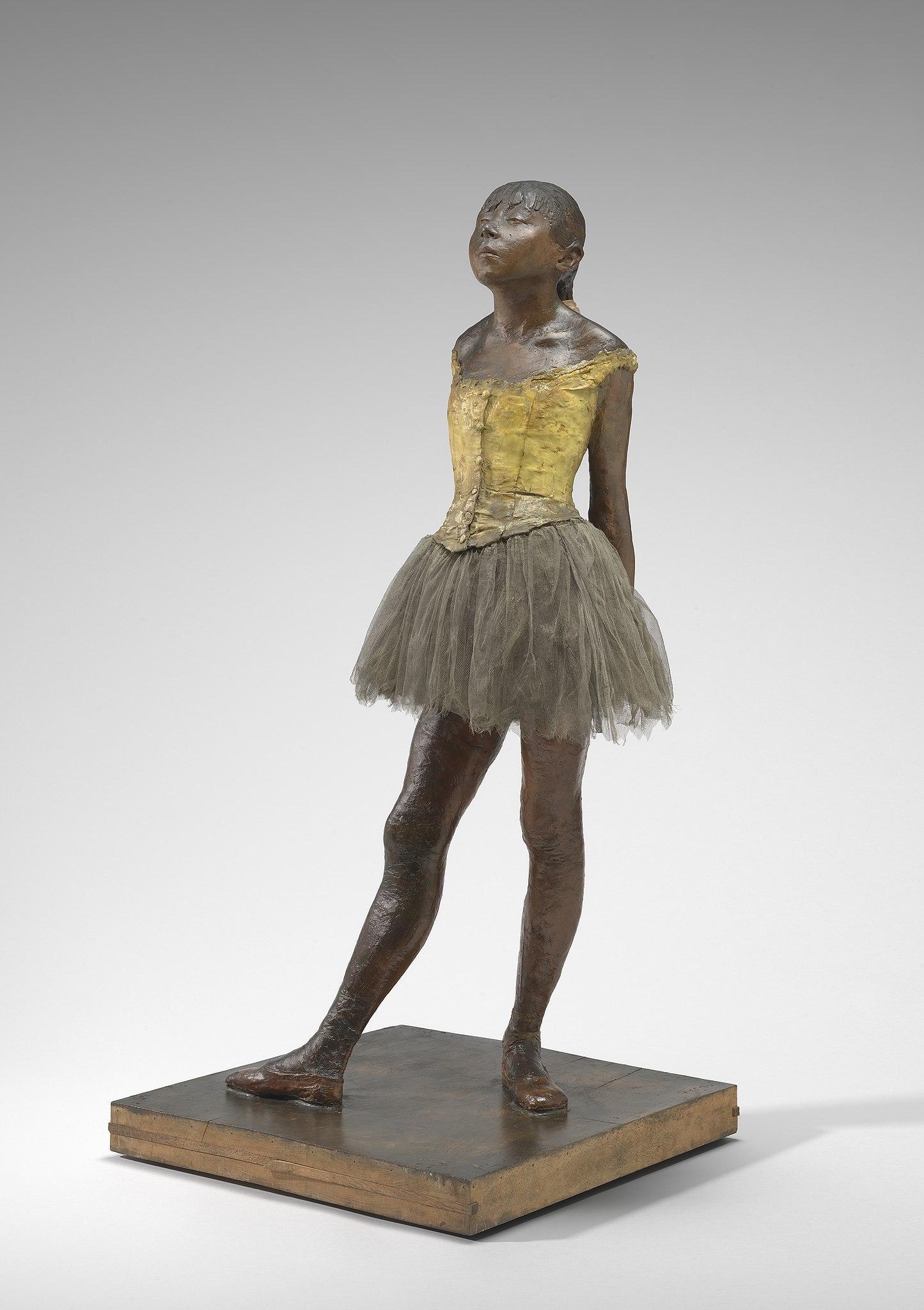 Perhaps his most famous sculpture, The Little Dancer Aged Fourteen (1878-81) shocked contemporary viewers with its realism. One of over 1,500 dance-focused works created during his career, the thirty-eight-inch-tall sculpture wears an actual tutu and was cast approximately twenty-eight times.

Degas’ first-rate education instilled strong drawing skills. After a brief stint in law school, he studied art and traveled to Italy to copy Renaissance masters. Around this time, Degas also began one of his early masterworks, The Bellilli Family (1858-67). The painting depicts his aunt standing over her family, with a glimpse of the family dog in the lower right-hand corner. Though he initially set out to become a historical painter, Degas shifted to contemporary scenes after meeting Manet. 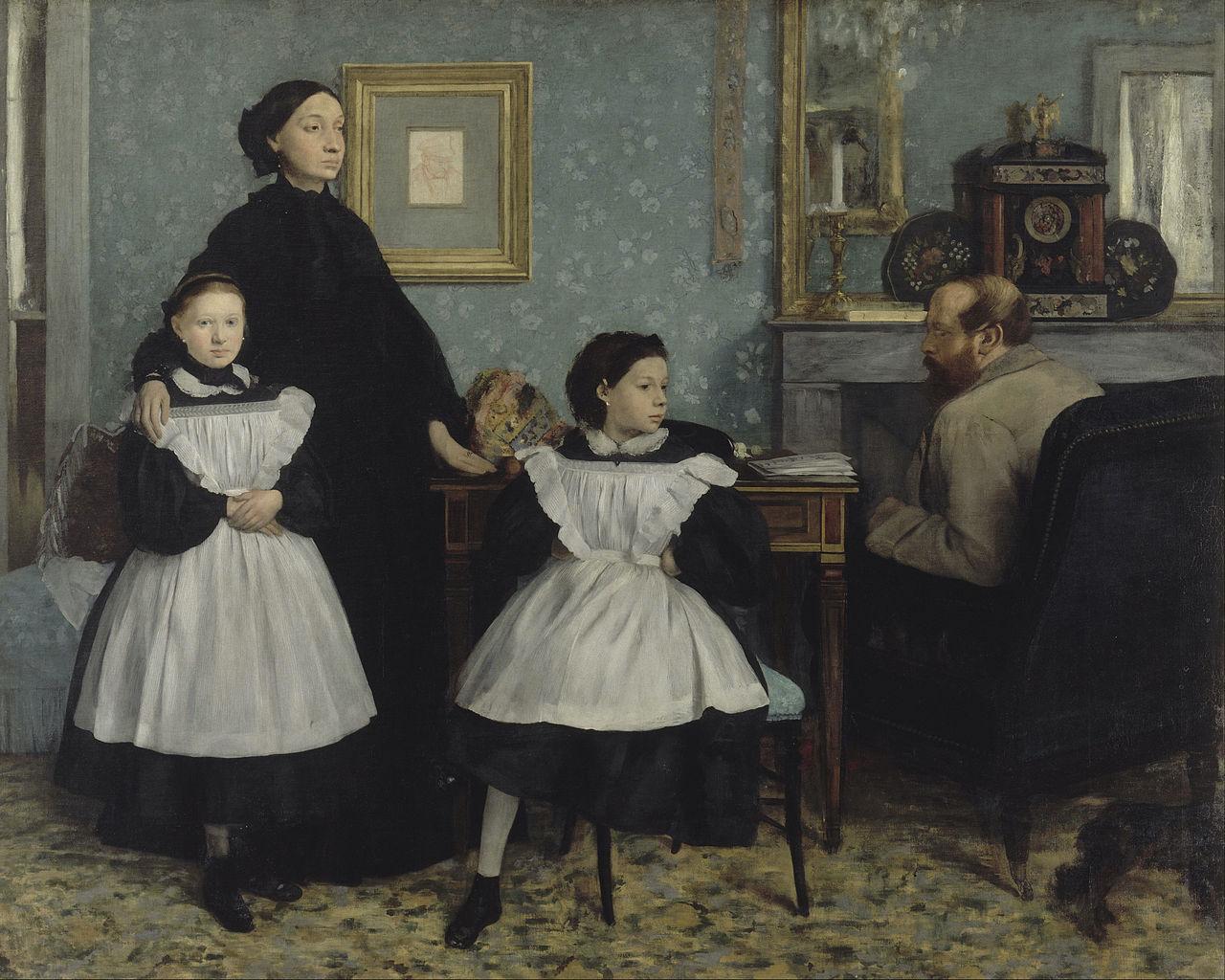 Following his father’s death in 1874, Degas was able to resolve crushing family debt through his art sales. That same year, frustrated by the stuffiness of the Salon, Degas formed the Société Anonyme Coopérative des Artistes Peintres, Sculpteurs, Graveurs with a group of young artistic rebels that included Claude Monet. Circumventing the Salon’s authority, they produced their own exhibitions.

Heralded as the Impressionists by the press, they shared a desire to capture the immediate moment, but had differing artistic philosophies. Though Degas was an integral organizing force behind the Impressionist exhibitions, he did not share their love of plein air painting. Resultant tensions led to their eventual disbandment in 1886. 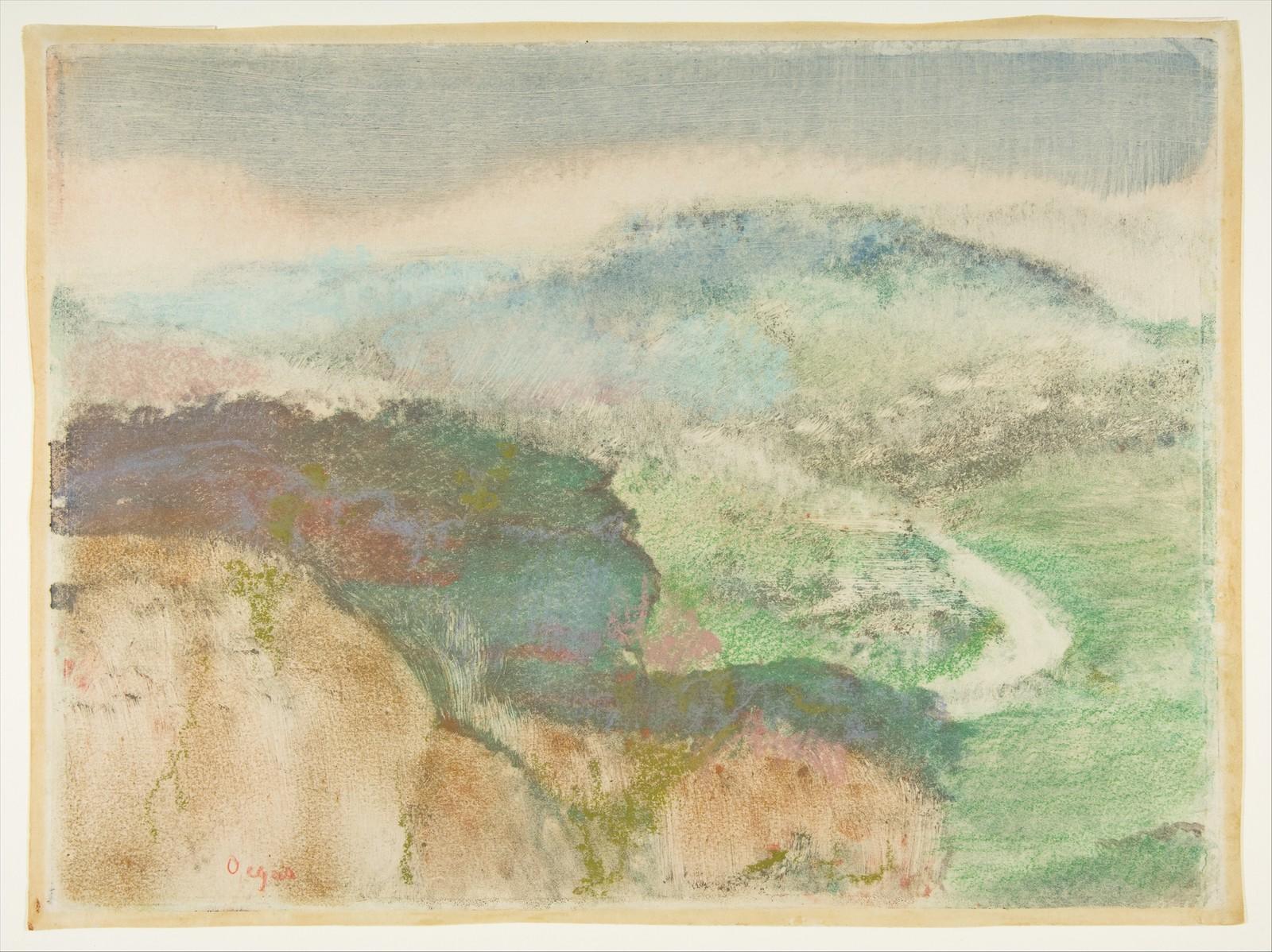 Working primarily from his studio, Degas painted contemporary Parisian life. Influenced by the asymmetric framing of Japanese prints and the growing field of photography, he synthesized classical rigor with revolutionary cropping and unusual perspective. The artist’s use of pastels over monotypes was also groundbreaking, adding luminosity and richness to the stark contrast of black ink.

After serving in the Franco-Prussian War (1870-71), Degas visited New Orleans, where he painted A Cotton Office in New Orleans, depicting his relatives and their business partners—the white-washed public face of the cotton industry. It is the only painting of his purchased by a museum during his lifetime. 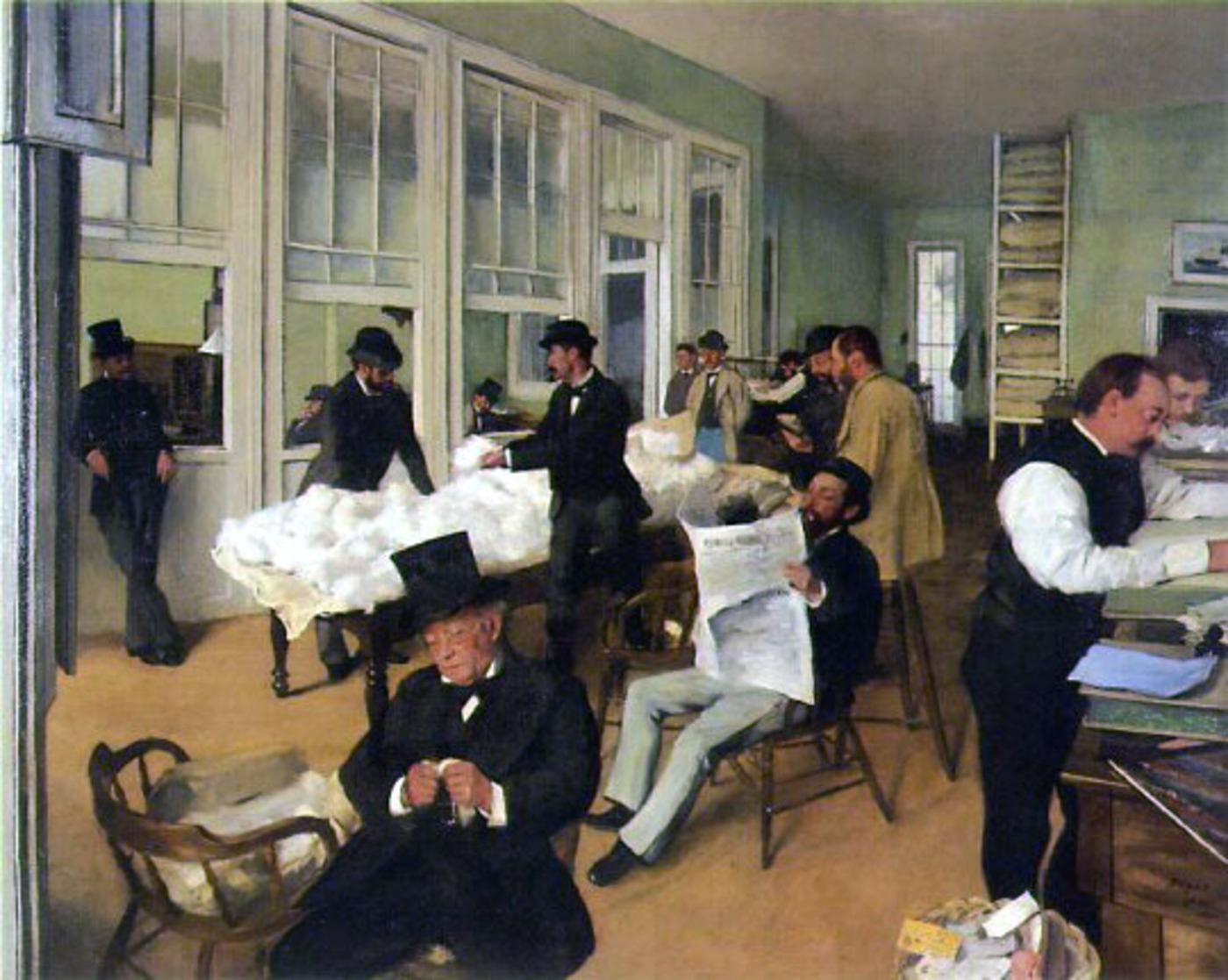 Many of Degas’ family were white nationalist slaveholders who supported the Confederacy. Perhaps it is therefore unsurprising that he became increasingly openly anti-Semitic through his life. After the Dreyfus Affair in the late 1890’s, Degas cut all ties with Jewish friends and refused to use Jewish models. Degas' reputation has also suffered in recent decades as art historians have begun to examine his sexist attitudes towards women and his treatment of his models.

Never married, Degas believed an artist had to live alone, and deliberately cultivated the persona of a curmudgeonly bachelor. As his eyesight failed, he stopped painting and focused on pastels and sculpture. He continued to produce work until 1912.