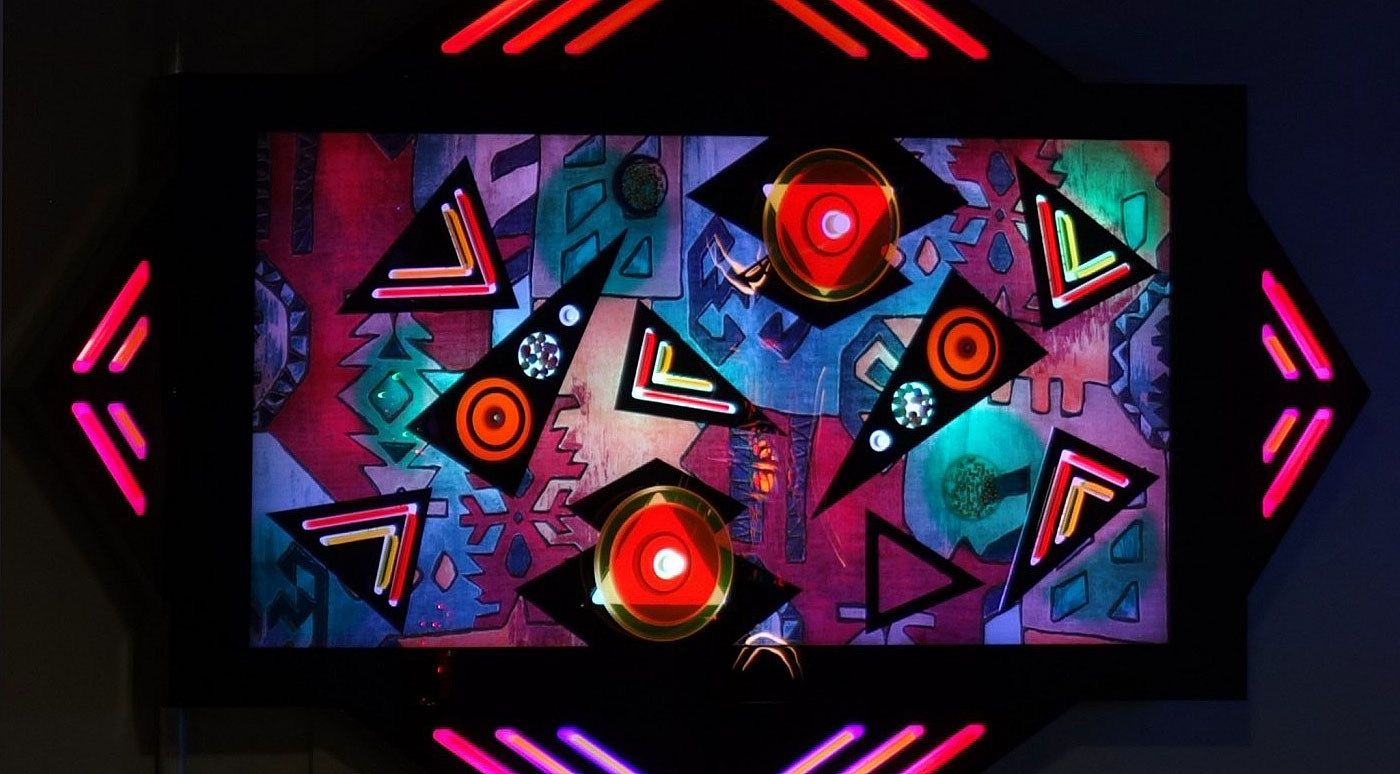 photo by marc billard
Enigma, a mixed media light installation by Dorothy Tanner.
95-year-old Dorothy Tanner isn’t slowing down, and after a decades-long career, her sculptures and installations are still enlightening viewers.

95-year-old Dorothy Tanner isn’t slowing down, and after a decades-long career, her sculptures and installations are still enlightening viewers.

“There’s so much science about the benefits of color and light and sound, it’s almost cliché now.”

It’s no stretch to say that Tanner ranks among the oldest working commercially successful artists in America. “I’m 95 and still making art,” she said. “I’m upright. Not too decrepit. I only look 80!”

Her light-hearted sense of humor and spiritual bent were evident in the 2018 site-specific exhibit on the first floor of the former Carnegie Library in Denver. The Lumonics team created the Mind Spa as a multi-sensory gallery darkened to display twenty glowing light sculptures. A mesmerizing psychedelic video of their art looped on a large screen. The space was hushed except for calming music. The effect was a cross between a phosphorescent cave, a serene chapel, and an LSD trip. The Lumonics Mind Spa’s stated intention was to help visitors “achieve greater spiritual awareness.”

“I’ve become less intellectual in my approach to everything and more spirit-based. Light is a conduit to spirit,” Tanner said. “And sound is so basic to us. Without the beat of our heart we don’t exist. The Mozart effect is very real. There’s so much science about the benefits of color and light and sound, it’s almost cliché now.”

Tanner heads the team of four artists who live in community and comprise Lumonics.

“Living together, the art is always in the air,” said Barry Raphael, the Lumonics archivist and publicist.

Tanner’s trio of collaborators are young enough to be her children. The small art tribe assists her increasingly in her process as her eyesight and hearing fail.

“We find ways to work,” said Marc Billard, a Lumonics collaborator and fabricator since 1972. “Even with her diminished eyesight, her color balance is still great.”

“She’s an inspiration to all of us,” said Barbara Ungar, who manages Lumonics’ bookkeeping and assists Billard in the studio. 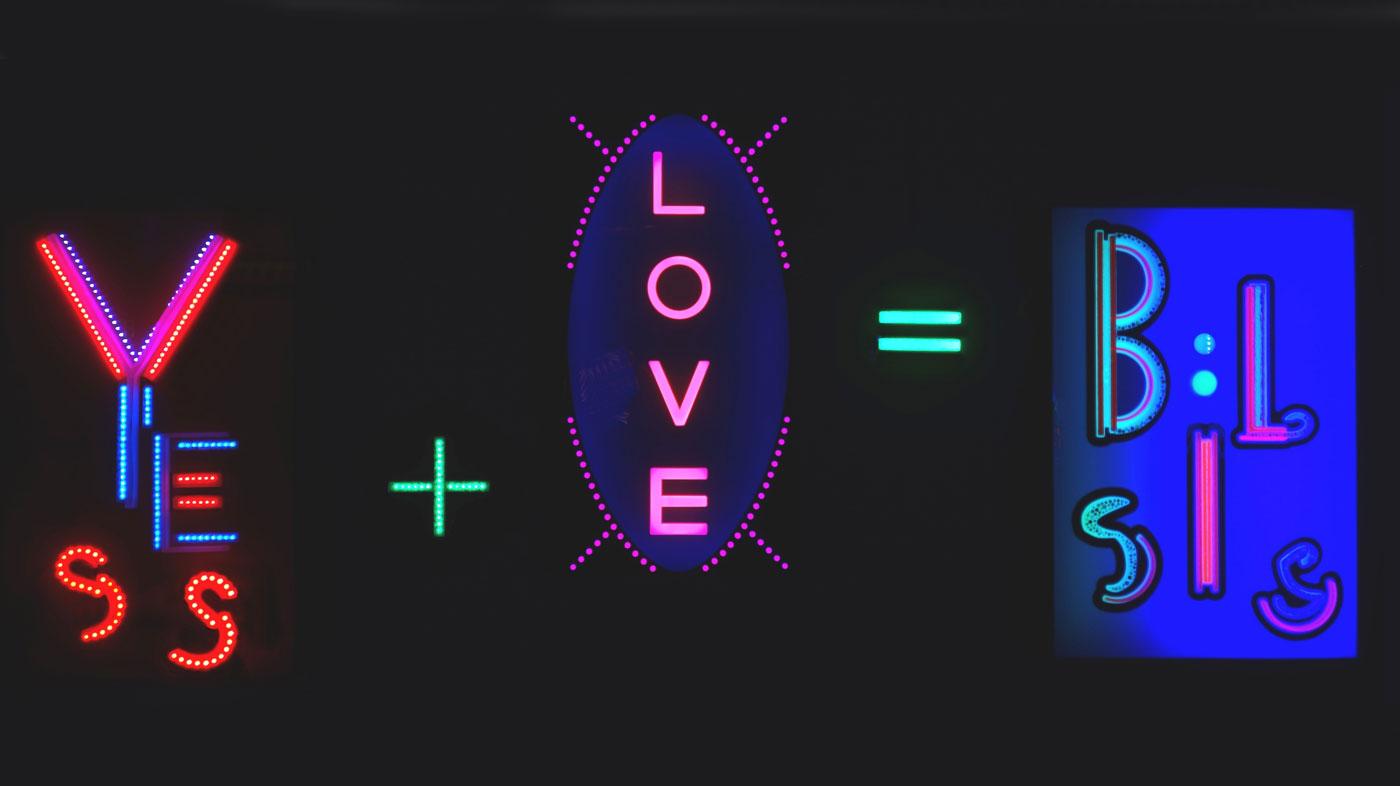 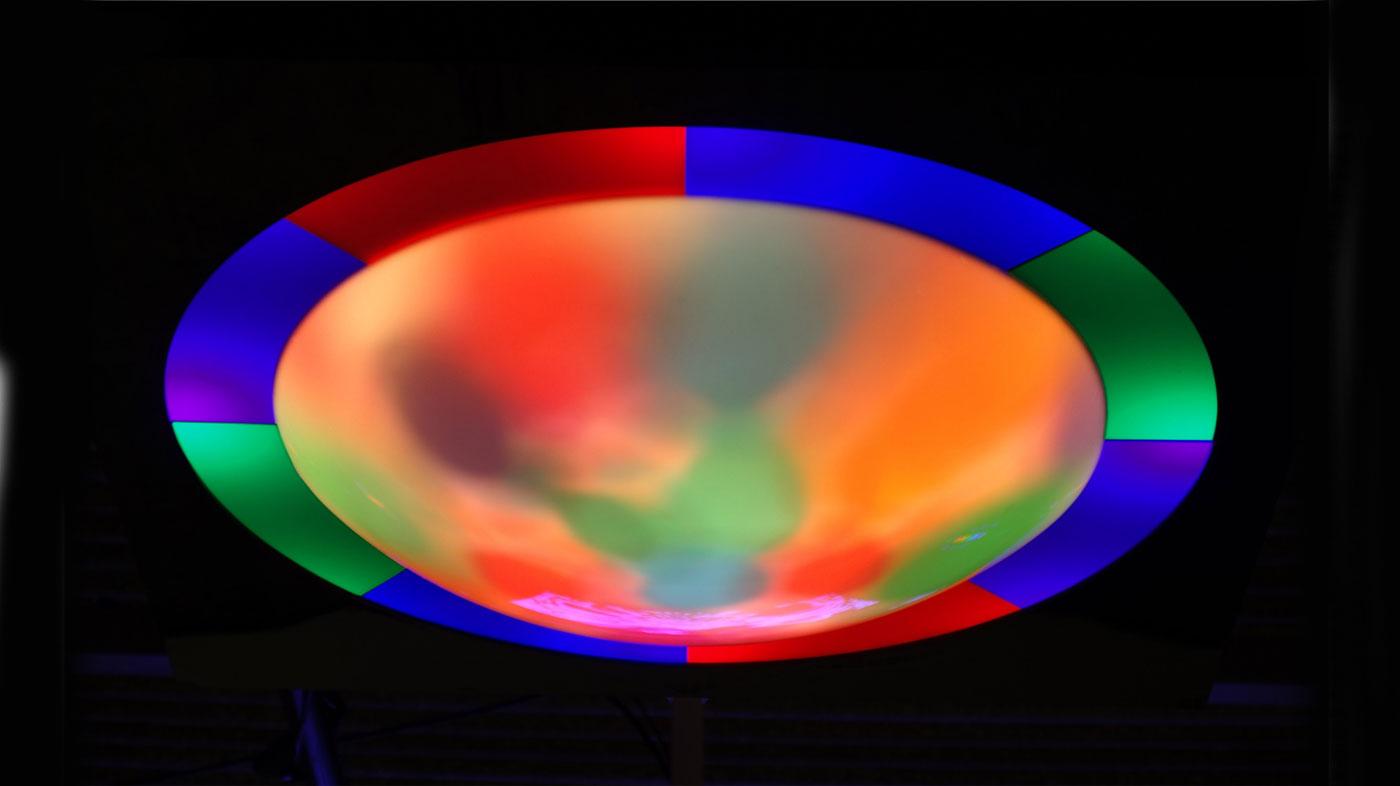 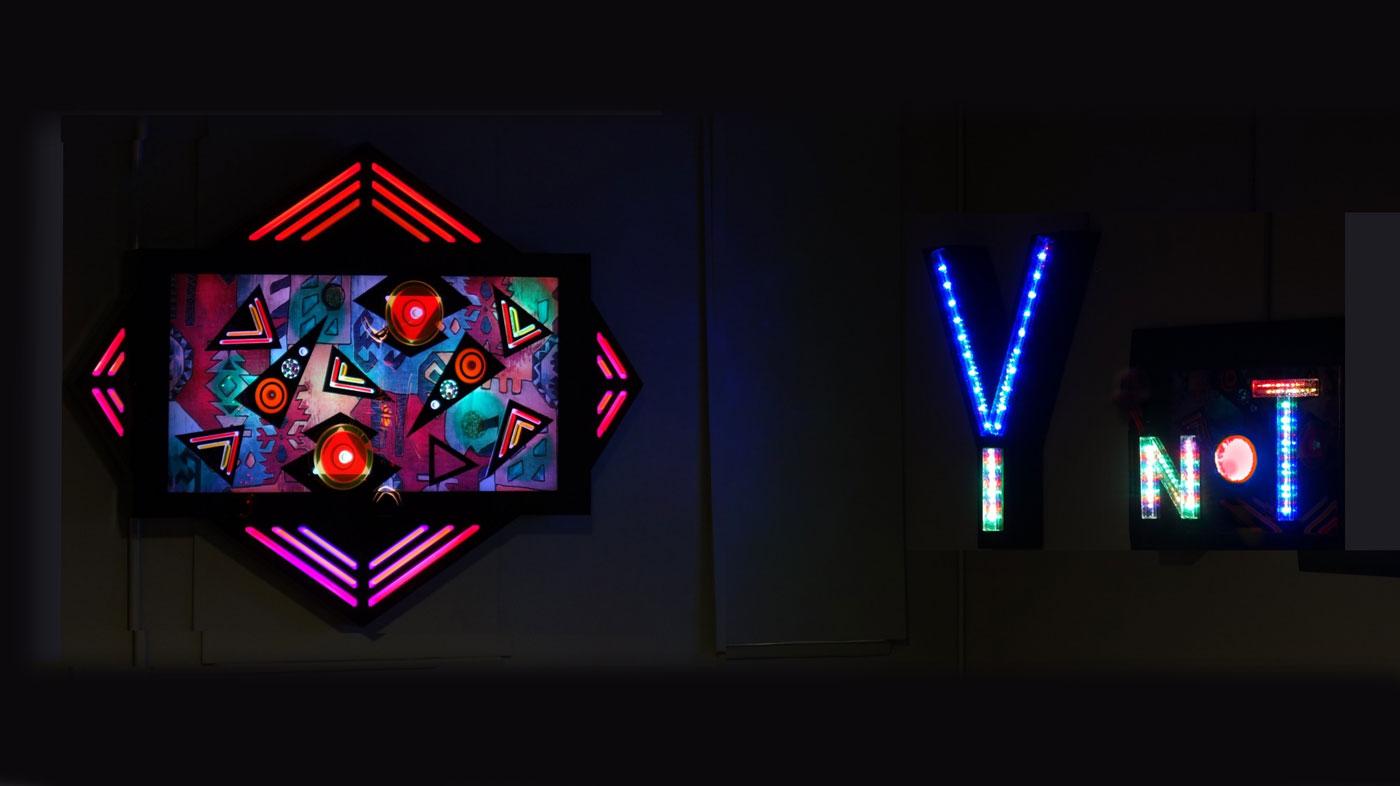 Enigma and Y Not by Dorothy Tanner. 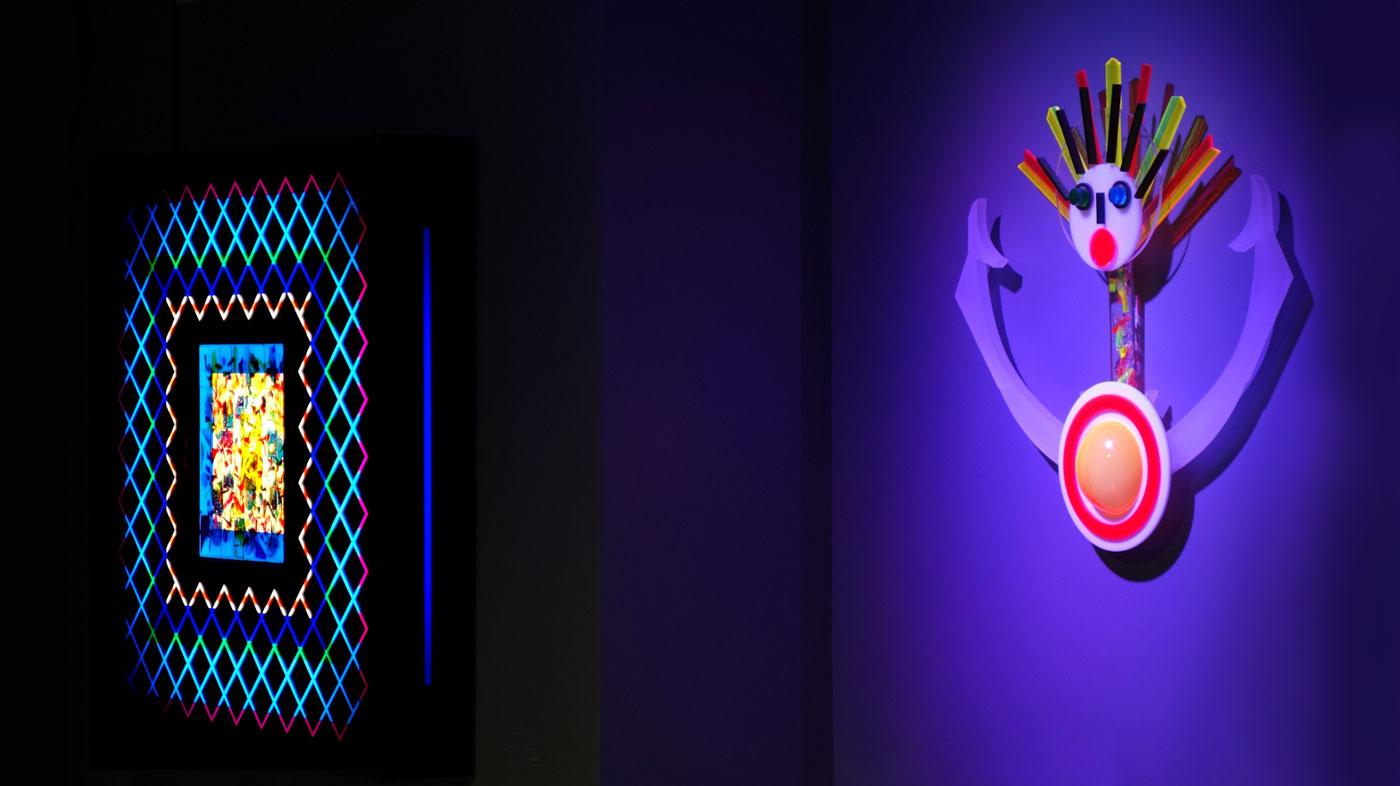 Light Spaces (left) by Mel Tanner and My Girlfriend (right) by Dorothy Tanner. 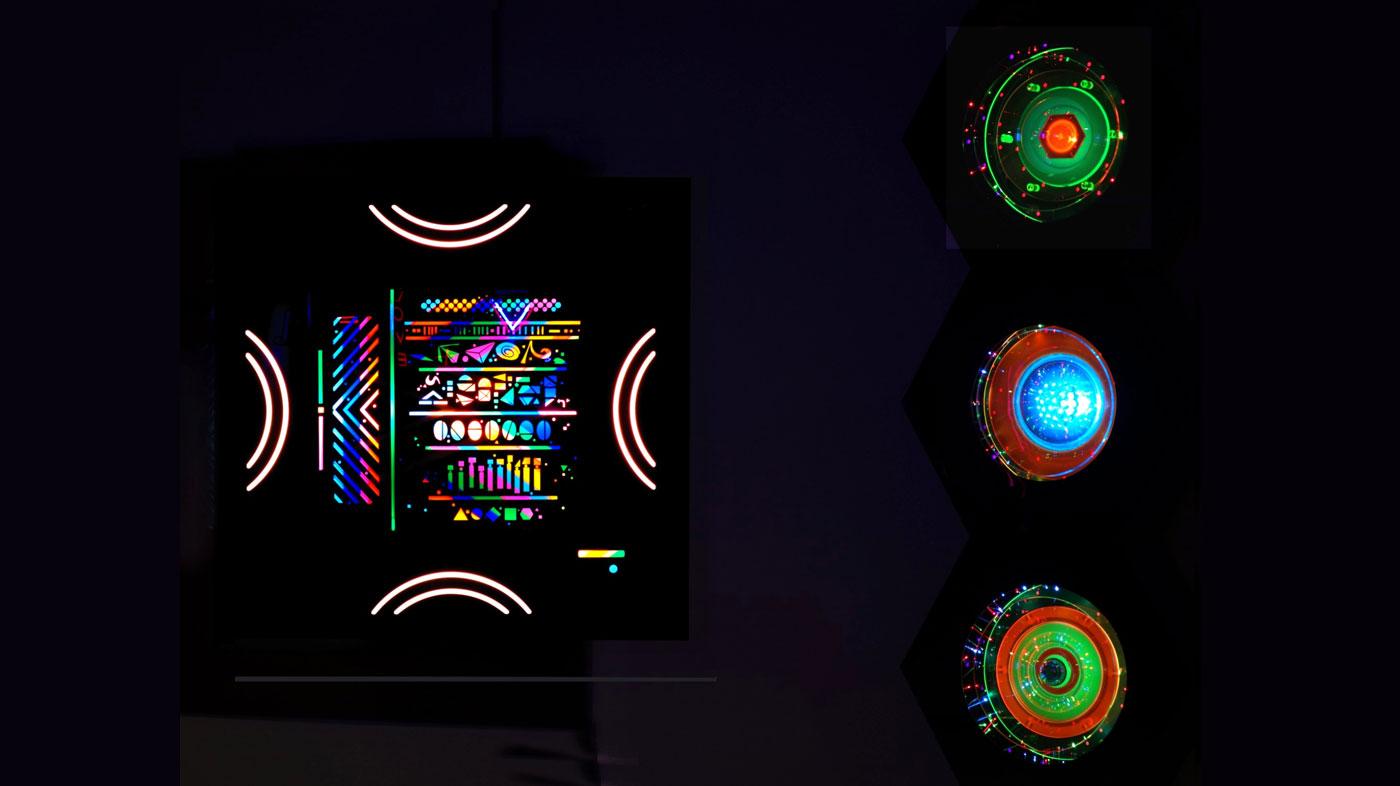 The Lumonics got their name from a member of MENSA, a fan who coined the portmanteau blending the prefix “lumo” for “light” and the suffix “onics” from “harmonics.” Lumonics originated in 1969, when Mel Tanner, Dorothy's late husband, started making light sculptures. Dorothy Tanner took a more active Lumonics role after her husband’s death 25 years ago, and continued to use color, light and sound to create various vibrations that set moods. While some installations are uptempo dance parties, the Mind Spa is more meditative.

“We chose the language of spirit, and we intended this as a sanctuary in which people can be in contact with other portions of themselves,” said Tanner. “It’s a very laid-back but purposeful intention to create a calm that results in a real sense of well-being. I want people to feel good.”

Jomar Suarez, MD is a board-certified psychiatrist who has collaborated with Lumonics. He plans to conduct medical studies on the therapeutic effects of Lumonics art.

“Through the years—over five decades now—people have commonly reported to Dorothy Tanner having profound spiritual and emotional experiences while contemplating her Lumonics pieces. Lumonics is exerting its effect by creating an immersive experience that feels safe and soothing, but also stimulating and expansive,” Suarez said.

“Lumonics pieces seem to have a harmonizing effect over the limbic system, allowing for better synchronization with the prefrontal cortex and likely resulting in the creation of novel neural pathways,” said the psychiatrist, who added that the effect could treat depression and post-traumatic stress disorder (PTSD).

Even the most well-balanced people benefit from a visit to the Mind Spa.

“We’ve always done it for an audience. It’s a people thing,” said Billard. “People do appreciate it and feel the vibration. As long as we can get the vibe across we’ve done something right.”

The Lumonics oeuvre includes hundreds of light sculptures. Typically known for freestanding sculptures, the team also creates wall-mounted pieces, like Script Series, including a piece animated in the manner of a nostalgic neon sign spelling out “Yess + Love = Bliss.” Both playful and dead serious, the sculpture could serve as Tanner’s current artist statement.

“Sometimes, you’re not quite sure you want to go forward—not just making art, but living. You’d just as soon stop. I was in an ambivalent place. However! My inspiration in relation to going further came in loud and clear,” Tanner said. “The firm ‘yess.’ Knowing that with love, it’s all possible. This can and does equal bliss.”

“Through the years—over five decades now—people have commonly reported to Dorothy Tanner having profound spiritual and emotional experiences while contemplating her Lumonics pieces.”

The new script series includes another piece that asks “Y not?”

“Letters are shapes, and shapes are what comprises art. This allows for play. If I continue, and I think I will, they will vary in shapes,” Tanner said. “The letters may become Arabic or Oriental.”

Billard is excited about the new direction for Lumonics: “With the software, controllers and sensors, the world is our oyster.”

The Lumonics light sculptures start with an industrial material: Plexiglass.

“The material has color built into it and transmits light and color in a unique way,” said Billard. “It turns me on.”

The Plexiglass palette includes at least 100 colors. The material varies from transparent to translucent, fluorescent to opaque textures.

Billard said, “We use flat sheets, except we blow our own bubbles. We roll our own cylinders. Mind’s Eye has some of Dorothy’s old jewelry and belts in it.”

The other element of design is light.

“The florescent lights were heavy, and incandescent is now practically illegal,” Tanner said. “There was a lot of waste, and they generated so much heat.”

“Some of the pieces melted,” said Billard. “LED adds another dimension. Before, it was more wan.”

The LED lights in the Mind Spa are so vibrant they’re juicy, a visual elixir, a spiritual refreshment.

Tanner ranks as a luminary in an art form not as well explored as other media. In his review of Tanner’s 2017 retrospective at Museum of Outdoor Arts in Englewood, Colorado, the artist Todd Siler put the work in context in terms of the larger art world. Siler wrote, “While gazing at these beautifully crafted and illuminated constructions, I time-traveled to the 1970s to 1990s when other innovative artist were exploring new media and aesthetic experiences: sculpting light (James Turrell, Keith Sonnier, Bill Parker); shaping sound (Christopher Janney, Paul Earls); moving us emotionally conceptually, spiritually with transcendent lightworks (Gyorgy Kepes); creating visionary works of elemental art (Otto Piene); and melding symbolic lights in immersive theater using virtual reality (Tod Machover).

Tanner encourages people of all ages to engage with her Lumonics sculptures  to experience moments surrounded by the presence of healing color, light and sound.

“When you wipe away all the peripheral stuff, you’re freed up,” Tanner said. “You’re lighter.”