Alternative Perspective: Where Math Meets Art
How Edvard Munch Turned to Art for Therapy
Beyond Rembrandt: 7 Other Noteworthy Dutch Old Masters
Hope Wanted: Photos Document New York City Under Quarantine
Egyptian Amulets and Their Power in the History of Jewelry

The Evolving Art of the Self-Portrait 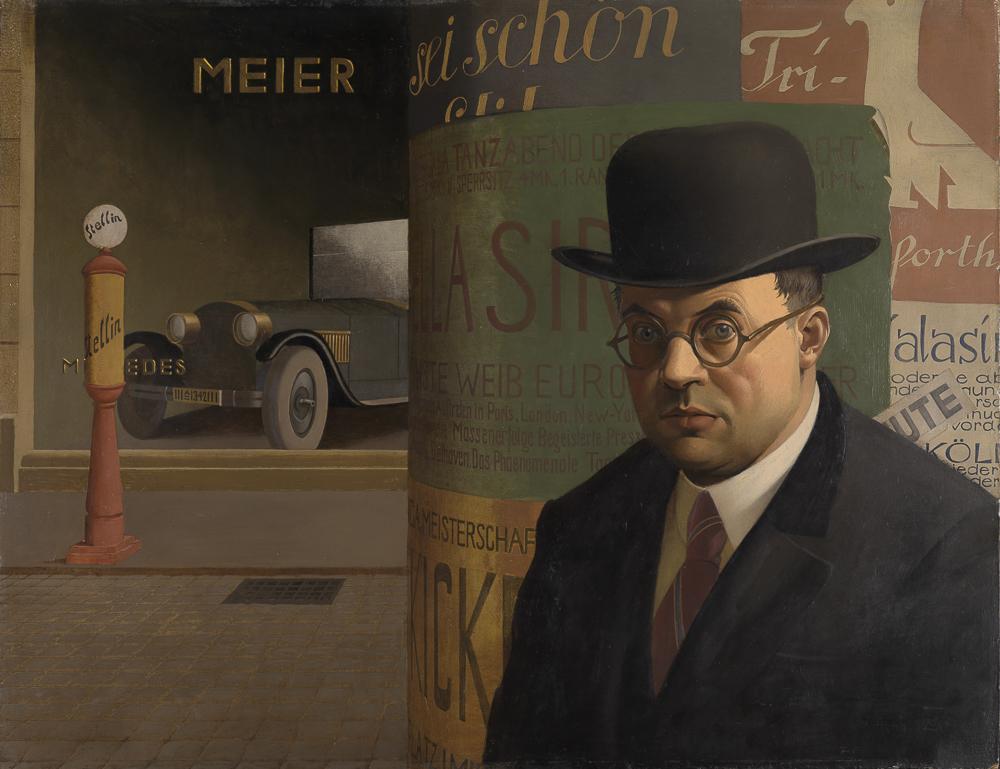 Self-portraits fulfill two purposes: not only do they give insight into the art of one particular time period, but they also shed light onto the self-perception of the artist. A new exhibition at the Neue Galerie in New York, The Self-Portrait: From Schiele to Beckmann, showcases how the genre lent itself to a wide variety of interpretations and artistic freedoms between Germany and Austria from 1900 to 1945. Quite expectedly, given the cultural and historical upheaval that consumed these two countries in that time period, variations on that theme abound. With 75 works by 33 artists, the goal of curator Dr. Tobias Natter was to give an overview of the very best and outstanding in the German-speaking countries between 1900 and 1945. 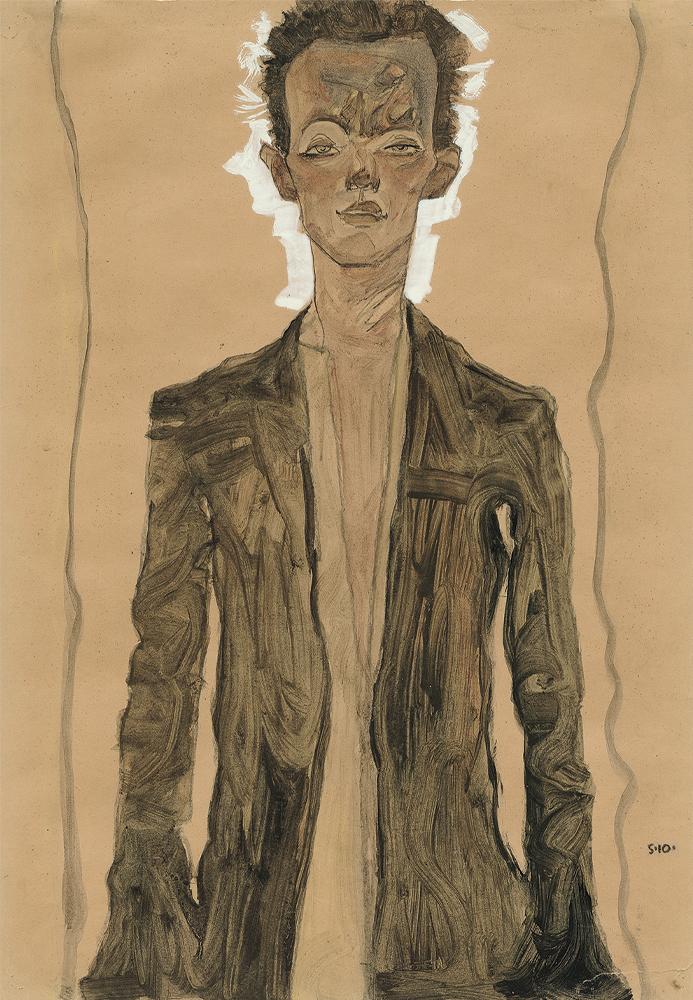 Quite interestingly, the exhibition opens with examples from two Old Masters, including a copy of Albrecht Dürer’s Martyrdom of Ten Thousand Christians, where the painter appears as a character, and a series of self-portraits by Rembrandt. The former was representative of a shift in the self-perception of the artist, which evolved from “craftsman” into “genius”. Rembrandt was keenly focused on drawing himself and, throughout his life, he produced more than 80 self-portraits, in which the appeared in different clothes, but with the focus always on his face. The exhibition the abruptly jumps to 20th-century self-portraiture.

Egon Schiele is greatly represented in the show, and viewers can see how he toyed with the genre first in the relatively conservative Self-Portrait from 1906, which is a somewhat realistic work with watercolor and gouache on paper. Then, his triple self-portrait from 1913, sketch-like in appearance, challenges the ideas surrounding the genre by juxtaposing three different versions of himself, if not straight-up “selves.” His Man and Woman (or Lovers) from 1914 defies the conventions of two genres, traditional self-portraiture and the nude, by painting the male figure as staring defiantly at the viewer, and by having the female nude with her back turned to them.  Similarly to Schiele, Oskar Kokoschka used self-portraiture to showcase his many “selves.” In The Painter And His Model (1923), he portrays himself in the act of painting a younger version of himself, referencing an artwork from 1910. In both of those portraits, he depicts himself as wounded, which served as a metaphor of society wounding the artist—he was an outcast. The ‘painter’ in the painting, however, represents his current self, a professor at Dresden whose fortunes changed for the best after the war. 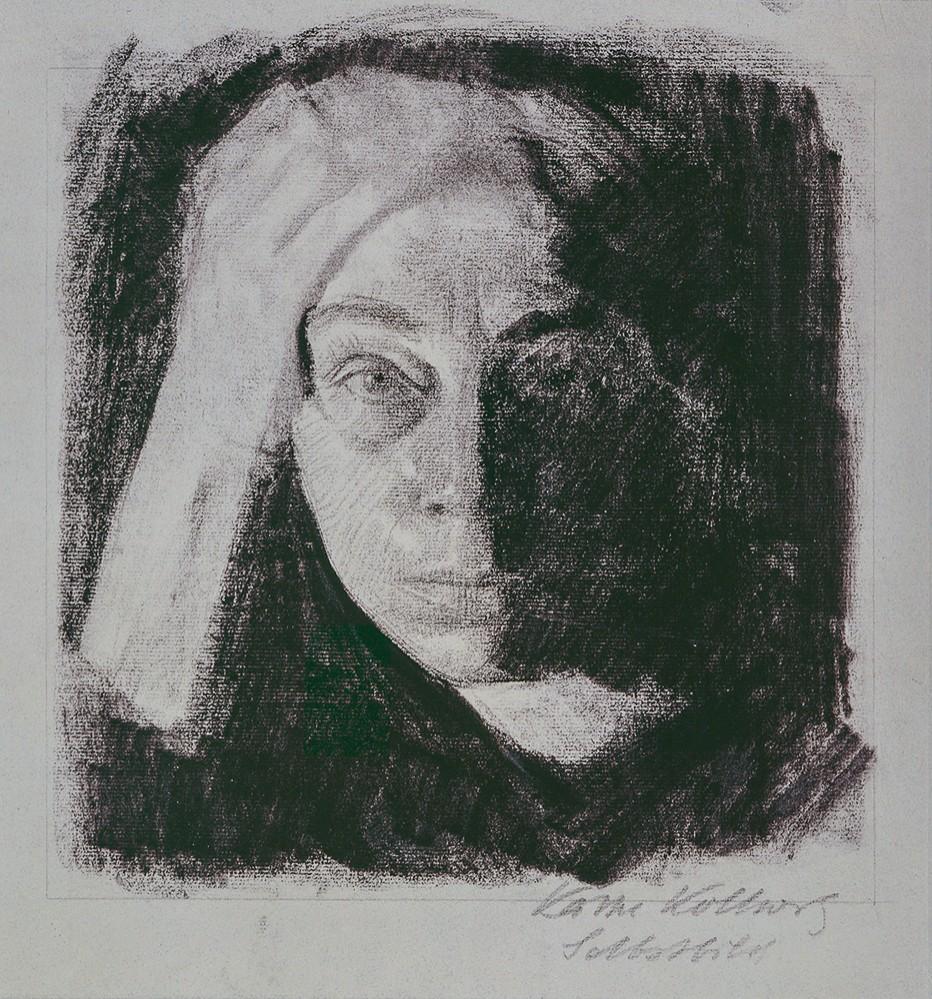 The Self-Portrait also makes it a point to show how women brought innovations to self-portraiture. A work from 1910 by Käthe Kollwitz, a pioneer in the arts who was the first woman to be appointed professor at the Prussian Academy of Arts, is an honest portrait in which her pose references The Thinker by Auguste Rodin. Paula Modersohn Becker portrayed herself as pregnant in her Self-Portrait on Her Sixth Wedding Anniversary (1906), but she was neither pregnant nor in a happy marriage. 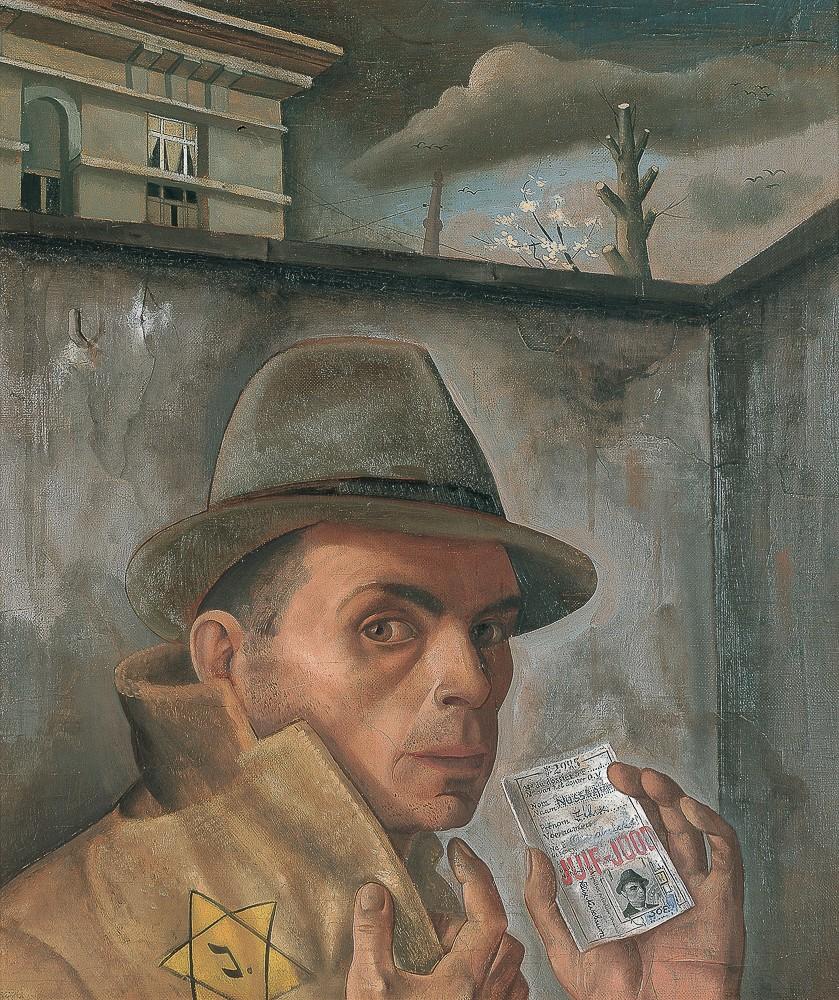 An entire gallery is dedicated to the Neue Sachlichkeit, or “New Objectivity” an art movement in German art that was in reaction to expressionism, and an example of the “return to order” that the visual arts were subject to after World War I. Needless to say, the Neue Sachlichkeit is not about making subjects idealistically pretty. Felix Nussbaum painted the Self-Portrait with Jewish Identity Card in 1943, a somber depiction of his condition as a high wall hid him from the rest of the city.

Otto Dix, in his Self-Portrait with Easel (1926) first appears almost as a dandy, wearing the latest fashion, but his face shows an unsettling expression. Max Beckmann adopts a Rembrandt-like stance, appearing in different guises in different self-portraits through the years: as a wounded soldier (1920) as a theater-goer in tailcoat (1923) and as a wounded soldier (1920). 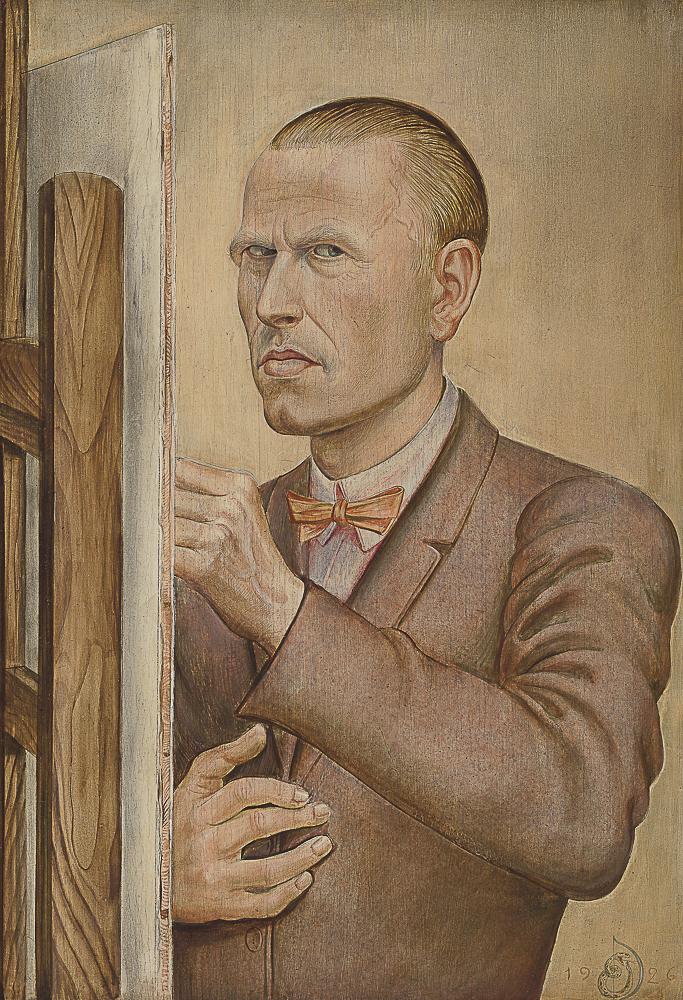 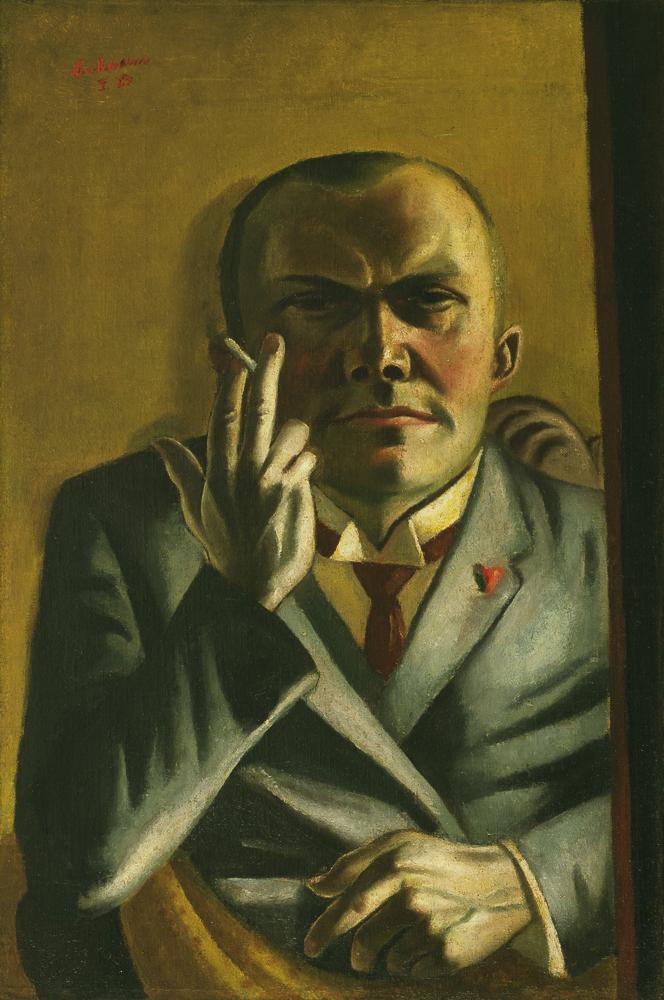 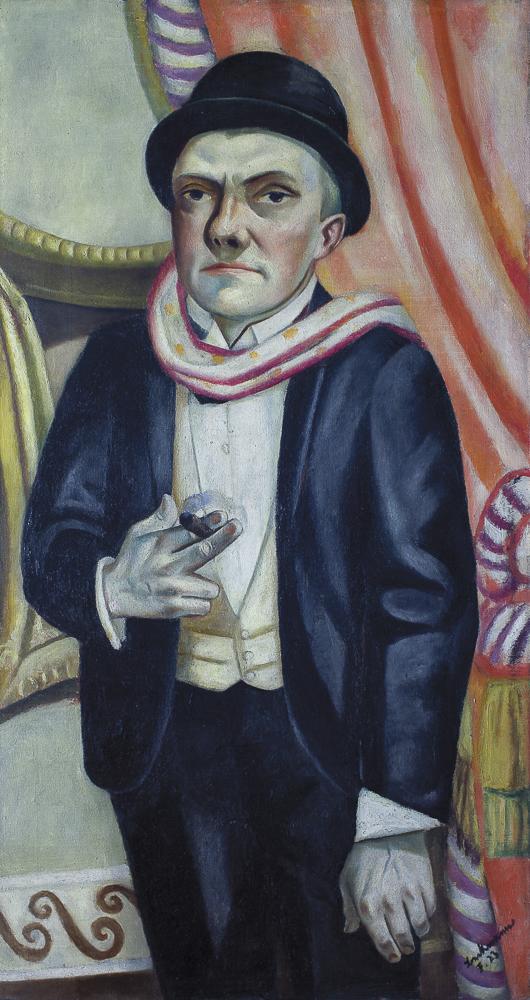 Interestingly, the exhibition ends with a brief survey of the then-budding art of photography, which was still considered subpar. However, artists such as Herbert Beyer toyed with photomontages in Humanly Impossible (1932), while Rudolf Koppitz created In The Bosom of Nature, a male nude in an alpine landscape, and their work demonstrated that composing, posing and staging a photograph was indeed an artistic endeavor and a fit canvas for self-portraiture.

After 1945, portraiture fell out of favor, until it was resurrected by Pop-Art and artists like Andy Warhol, David Hockney, Francis Bacon, and Lucien Freud, but still, its relevance is no longer what it used to be. This is quite paradoxical: the way all these painters explored their own personhood and their different “selves” is particularly relevant in this day, when introspection has become a performative act.

The Self-Portrait: From Schiele to Beckmann continues through June 24, 2019, at the Neue Galerie in New York.

Glory of Spain: Treasures from the Hispanic Society
Unparalleled outside of Spain, the collections of the New York–based Hispanic Society Museum & Library focus on the art and culture of Spain, Portugal, Latin America, and the Philippines, from antiquity up until the early 20th century.