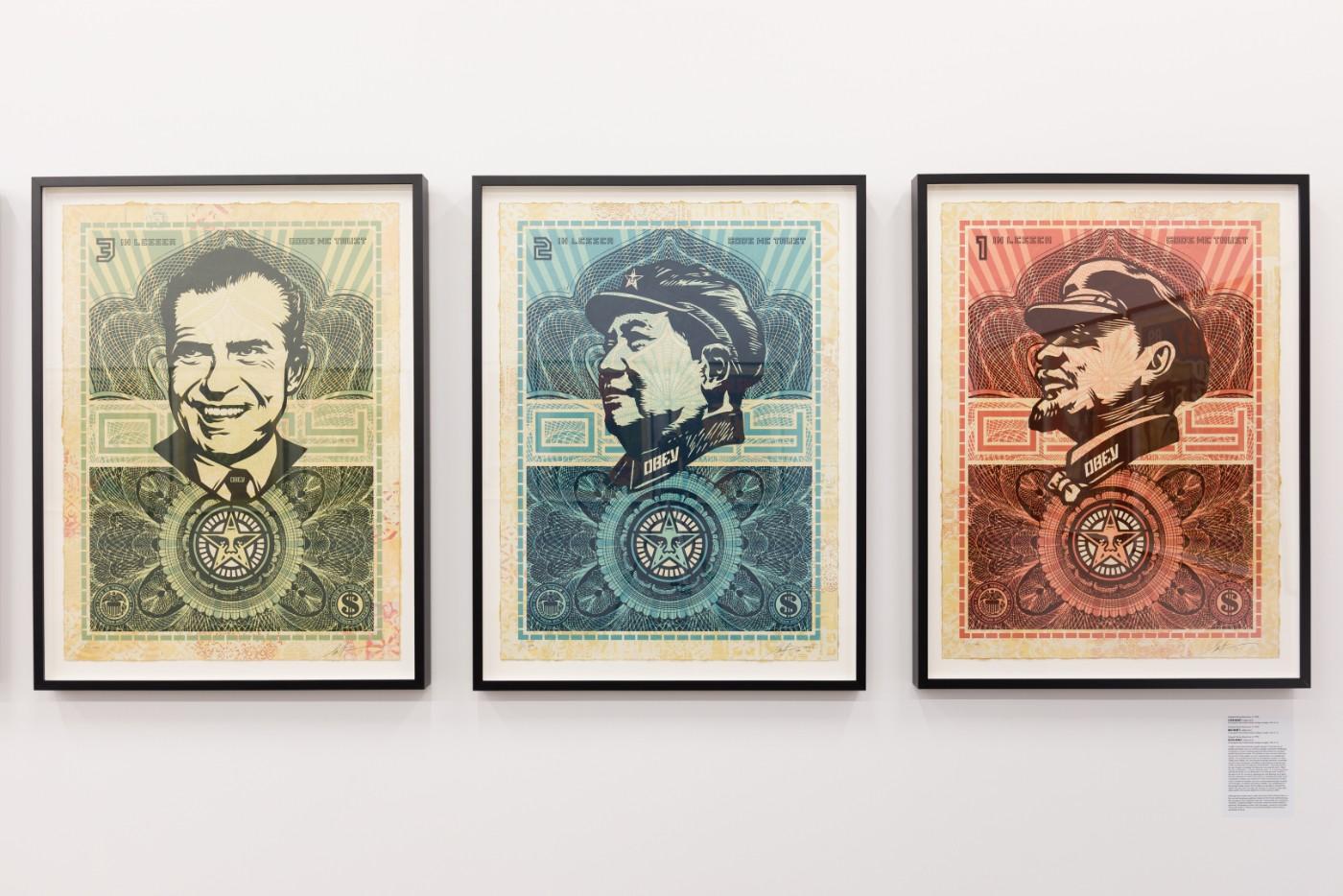 The city of Vancouver in British Columbia, Canada, has a new, stunning mural by the American street artist and activist Shepard Fairey. Covering 10,000 feet and as high as twenty stories, Earth Justice was commissioned by the Burrard Arts Foundation (BAF) and was completed on August 7th. The mural opened the retrospective on Fairey’s thirty-year long career, Facing the Giant: 3 Decades of Dissent, on show at the BAF until September 28th, 2019.

Shepard Fairey started his artistic career in the mid-80s while attending the Rhode Island School of Design. In 1989, his sticker campaign “André the Giant has a Posse” made him famous in the skater communities around the United States. The sticker was created from a photograph of the French professional wrestler André René Roussimoff (1946-93) that Fairey had found in a newspaper in the summer of 1989 while teaching a friend how to create stencils. Because of the threat of a lawsuit by the American entertainment company Titan Sports, Inc. in 1994, Fairey decided to create a more stylized image and added the slogan “OBEY,” creating the now well-known “Obey Giant” image. In an interview with the Boston Phoenix in 1995, Fairey said that, at the time, there was an estimate of 450,000 pieces around the world. 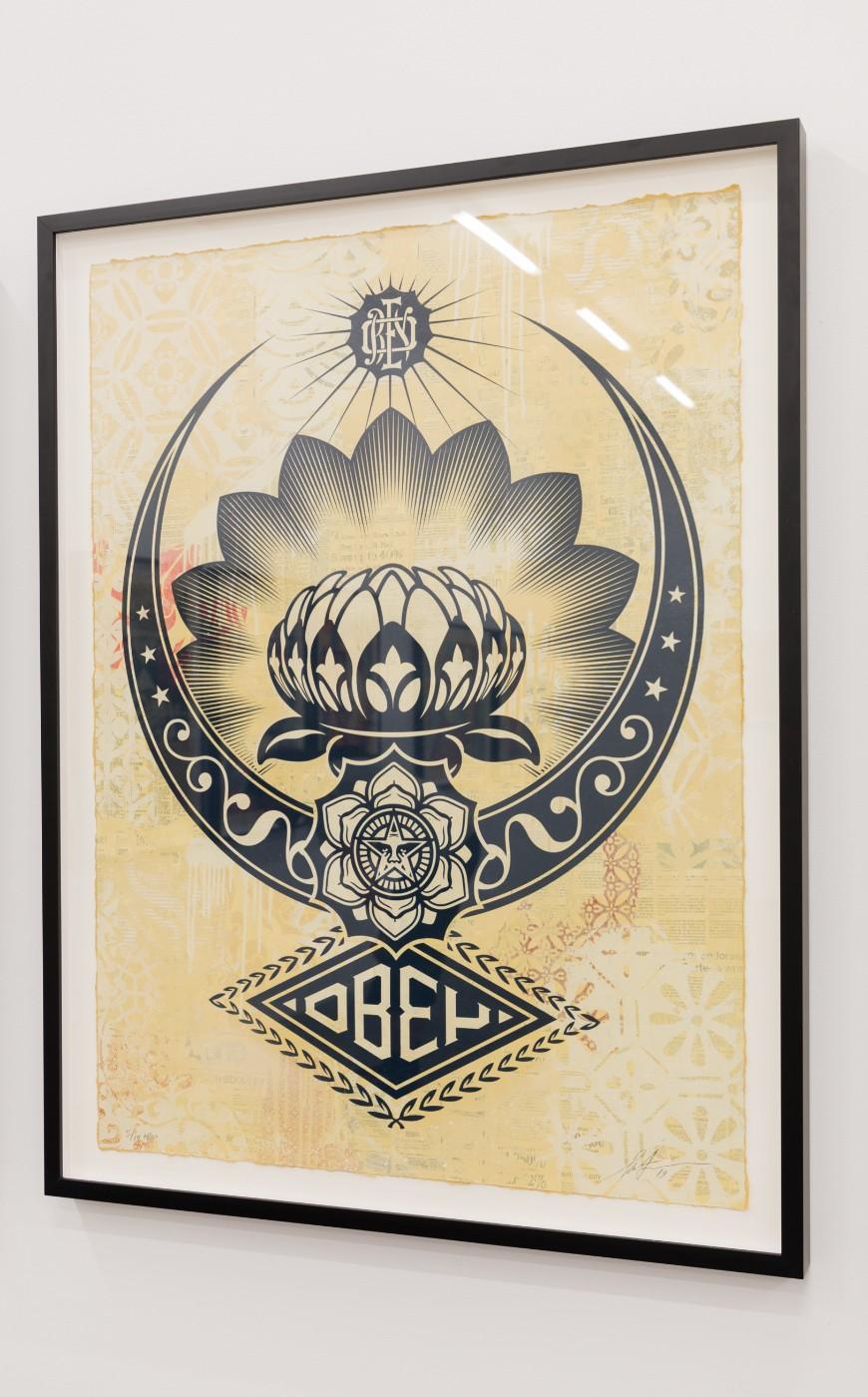 The sticker was just the beginning and along the years Fairey worked on marketing campaigns, designed album art for artists such as The Black Eyed Peas, The Smashing Pumpkins, and Led Zeppelin, participated in various street art campaigns and painted almost a hundred murals around the world.

In 2008, Fairey designed the poster in support of Barack Obama’s presidential campaign. The poster was a stylized portrait of Obama in blue, red and beige, with the word “hope” in capital letters at the bottom (other versions of the same poster feature the words “progress” or “change”). Stylistically, the image is influenced by Socialist Realism, an artistic style that developed in the Soviet Union between the 1930s and the end of the 1980s. The purpose of Socialist Realism was to inspire optimism for the future through an idealized portrayal of people and situations. In the case of the 2008 poster, the optimism is conveyed by the one-word slogan and Obama’s confident gaze directed towards an invisible yet promising future. Moreover, the strong contrasting colors, the stylized portrait of the subject, and the simple, yet engaging slogan are all elements that have been frequently used by propaganda artists around the world. 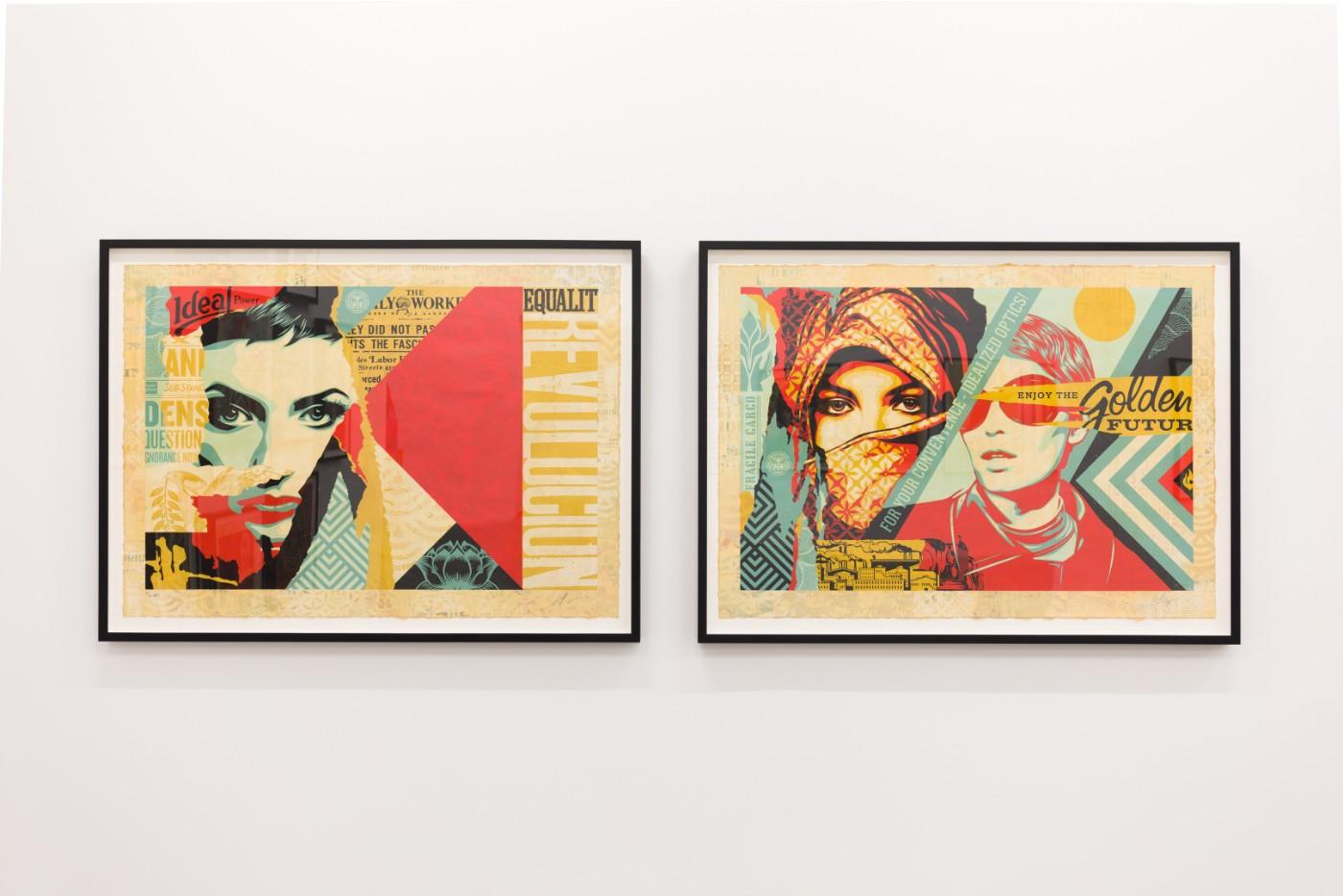 The term propaganda does not scare Fairey. In a 2015 interview with Hugh Hart, Fairey noted: “I love propaganda art from many countries and consider my own work to be propaganda because it’s designed to influence people so they see my point of view on issues.” The word propaganda comes from the Latin term propago which was originally used to describe the reproduction and propagation of plants and animals. In the sixteenth century, the Catholic Church began to use the term to indicate the dissemination of its religious precepts. Between the First and Second World War, the word acquired a negative connotation in the Western world as it became linked with the attempts to influence consumers and voters’ behavior by economic and political entities. Despite the negative understanding of the word, Fairey believes that his propaganda art has a positive connotation and it should be understood as the start of a conversation, not the end of one. 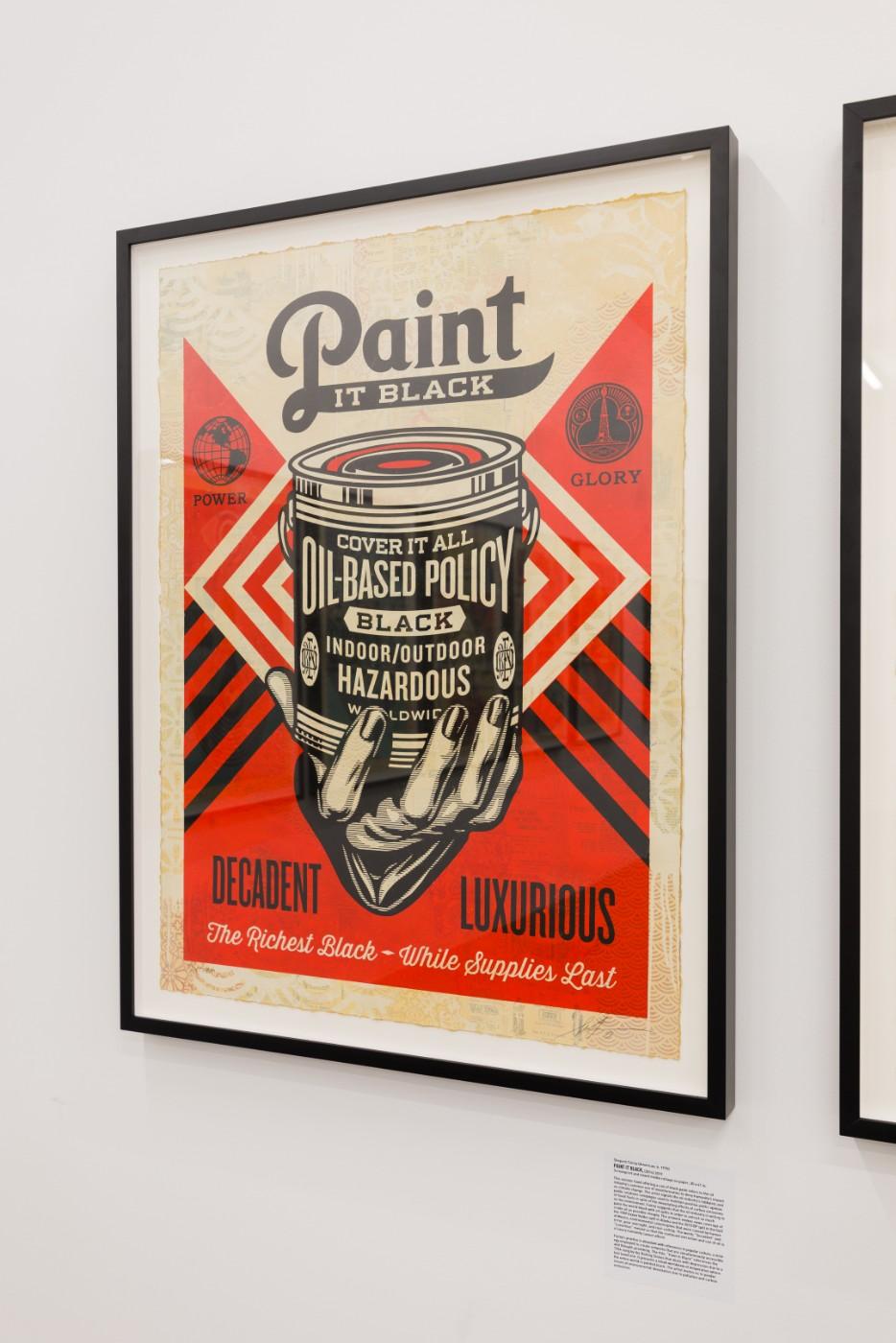 The conversations that Fairey’s works address include not only politics but also environmental justice (the aim of Vancouver’s Earth Justice), gender inequalities, xenophobia, economic imperialism, and war. The BAF exhibition features 30 hand-painted multiples, as well as paintings and stencils. One of the prints on view at the exhibition depicts a red rose that has grown through a shackle that features the slogan “Rise Above.” The sun-ray effect is an evident nod to Soviet and Chinese propaganda posters where political leaders were depicted surrounded by sun rays. The screenprint Paint it Black instead is a reference to the famous 1966 Rolling Stones hit and addresses the issue of the devastating effects that the oil industry has on the planet in terms of carbon emissions and pollution. About Fairey and the impact of his art, the founder and board president of the BAF, Christian Chan, said: “Shepard has the unique ability to capture the public imagination, generate positive dialogue and spur people to action through bold and beautiful artwork.” 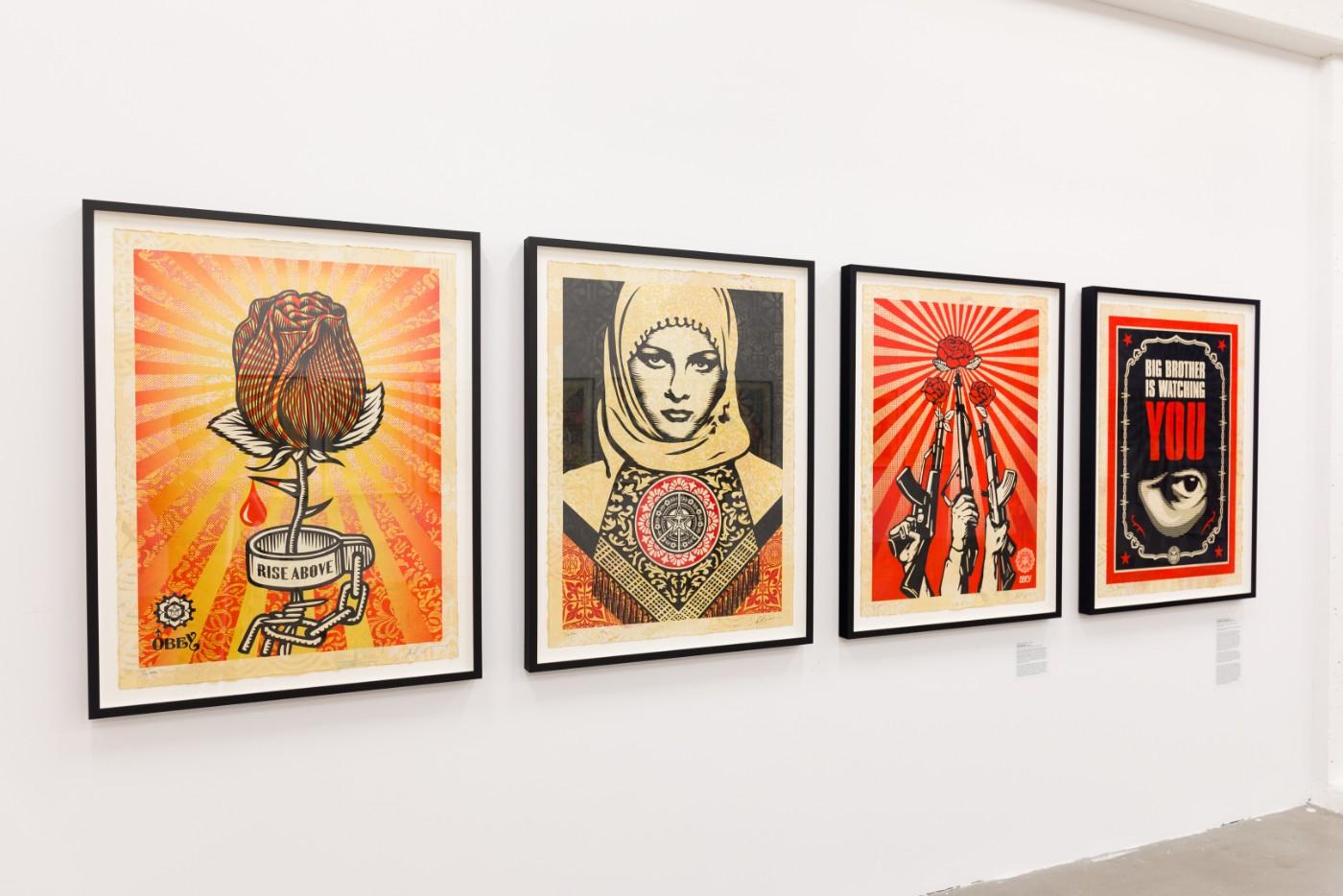 Facing the Giant: 3 Decades of Dissent is on view at the BAF in Vancouver until September 28th, 2019.