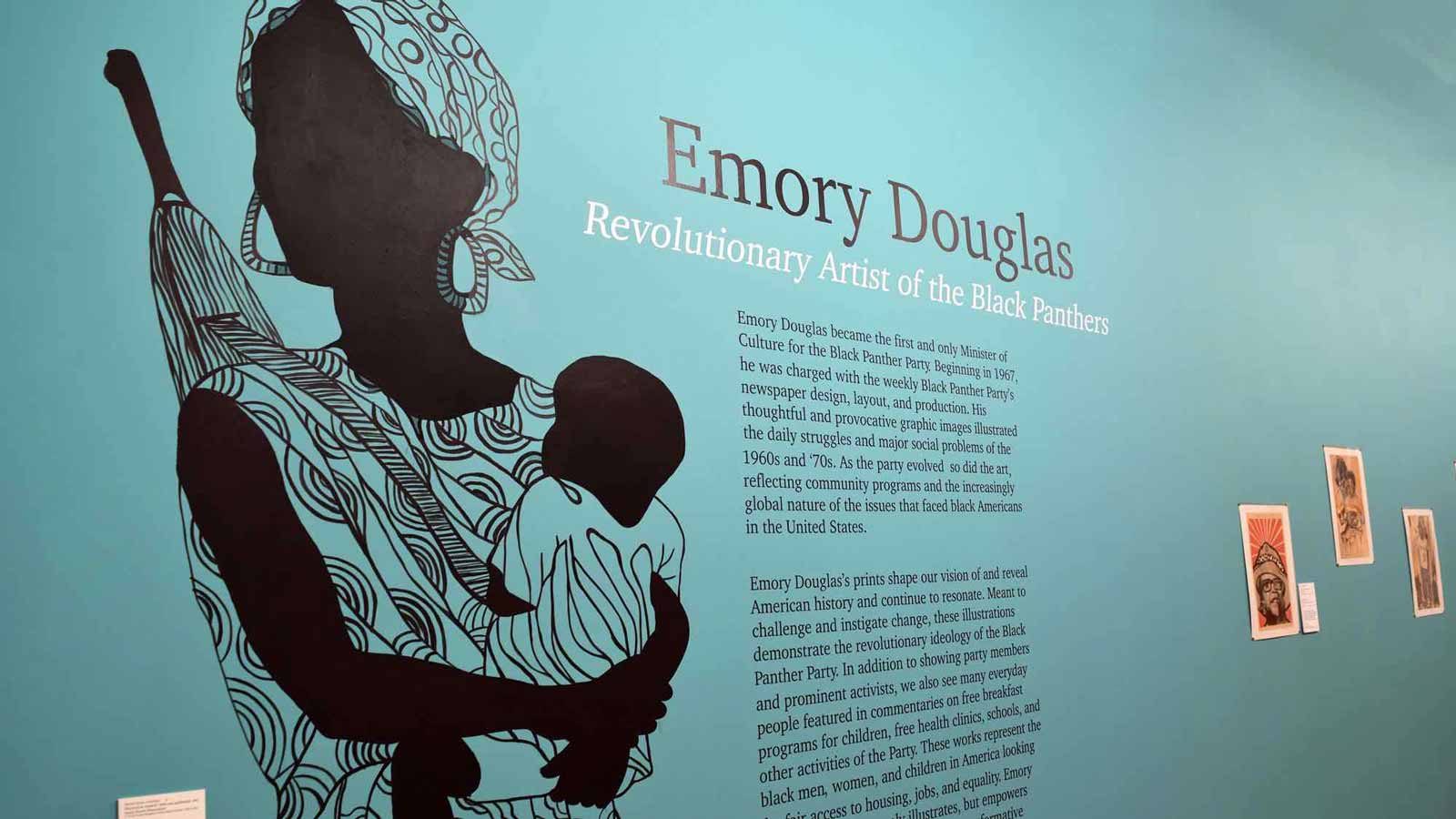 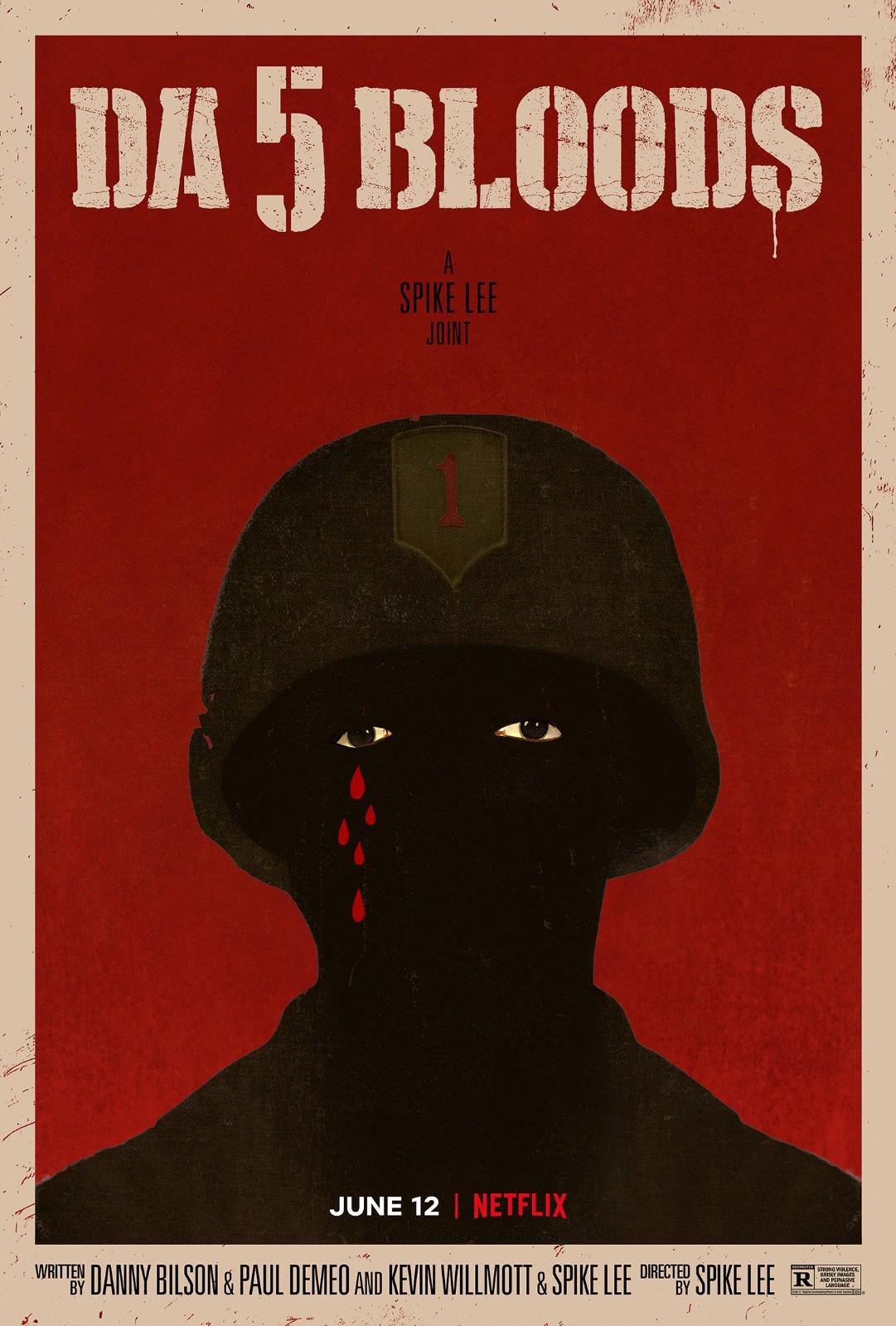 “Aside from their pure visual seductiveness, I was attracted to Douglas’ images because they showed both anger and hope”

Few artists have had a greater impact on the visualization of modern politics and culture than Emory Douglas. Starting in 1967 as the first and only Minister of Culture of the Black Panther Party, his iconic images communicated the values behind the Party’s 10 Point Program. This list of social mandates sparked some real, positive change including a very successful, nationwide children’s free breakfast program. Douglas' unbroken chain of commitment to solidarity and the ideals of freedom for oppressed people around the world continues to fuel his work and has made him an inspiration to the Black Lives Matter movement today.

Born in Grand Rapids, Michigan in 1943, Emory (as he signs his work and prefers to be called) spent most of his life in the San Francisco Bay area. His early experience of being arrested led him to pursue a life as an artist whose work exposes the abuses of power within the justice system. At thirteen, Douglas was playing dice on the streets with the older kids when he was arrested for gambling and sent to a California youth detention center. Emory might have been on the path directly to prison, like many other young Black men, when, with the influence of his supportive mother, he was assigned to work in the juvenile detention center’s print shop. While there he learned the technology behind the commercial printing process, which fed his desire to pursue graphic design at San Francisco City College. His swiftly evolving political awareness led him to join the Black Students Union, formerly known as the Negro Student Association. Emory became part of a growing Black Power movement, which coincided with anti-Vietnam war sentiment and a rising feminist tide to make for an era of major cultural change not unlike our current moment.

Douglas began hanging out at the newly organized Black Panther Party headquarters in 1966. He was impressed by, “the discipline and determination of [the founders], Huey Newton and Bobby Seale, to overcome the same issues Blacks–people of color–are facing today.” Being in the right place when, in 1967, “Huey said let’s start a newspaper,” Douglas realized his design sense and drawing skills would be a valuable asset to the organization and movement. Instinctively he knew that it would take powerful imagery, combined with the right words, to effectively bring the Black Panther’s message to their community. The weekly newspaper, in print until 1980, which included images by Emory, reached its peak distribution of an estimated 139,000 to 400,000 readers a week in 1970-71.

Artist and writer Collette Gaiter wrote in her forward to the monograph Black Panther: The Revolutionary Art of Emory Douglas (Rizzoli, 2007), which accompanied a Museum of Contemporary Art, Los Angeles (MOCA) exhibition, “One of Douglas’ most significant contributions to the Party was his ‘branding’ of the Black Panthers revolutionary vision before the concept of branding was widely used for marketing ideas and products.” As a teenager, Gaiter was impressed by Douglas’ “bright and bold” drawings and “outrageous text” in “huge typographic headlines.” Gaiter writes, “Aside from their pure visual seductiveness, I was attracted to Douglas’ images because they showed both anger and hope.”

Contrary to the misogyny usually assigned to the Panthers, women played important roles within the organization, at one point comprising two-thirds of their membership. Douglas illustrated women in the daily tasks of child-rearing, cooking, and cleaning, invisible labor that holds households together, side by side with images of empowered women carrying weapons to defend themselves. For the teenaged Gaiter, Douglas’ work, “permanently changed my political and artistic worldview.”

Thick black lines delineating his figures are an Emory Douglas trademark. Practically speaking, the lines helped to cover irregularities inherent in the analog printing process. In an interview with the curators of the MOCA exhibition about his use of heavy black lines he explained, “I like woodcuts, but it took so long to [make them, so] I started playing with photographs and shadows and playing with markers and pens to get that old woodcut look.” Douglas was also a master of remix, using photographic collage for added impact that photographs alone could not achieve. 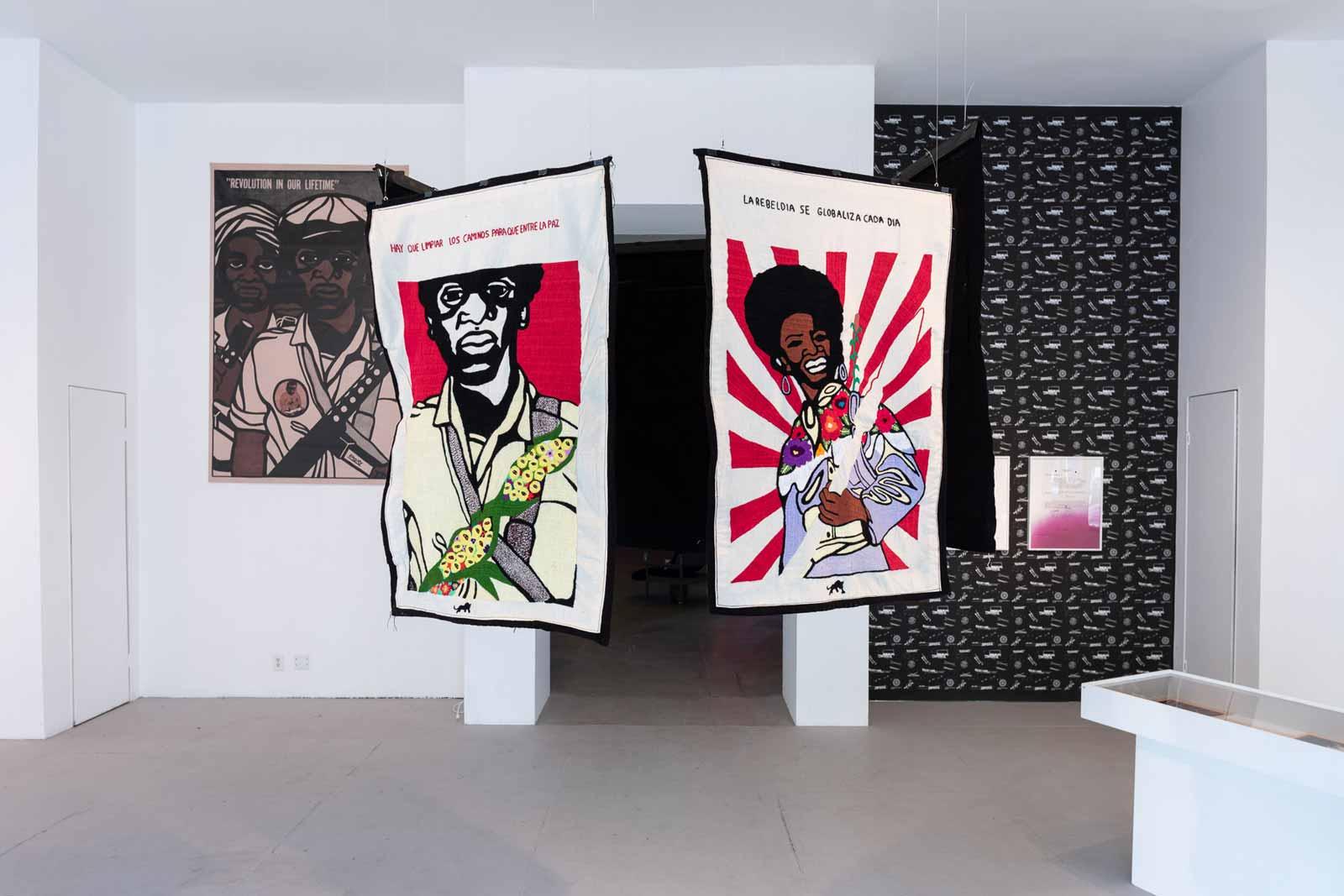 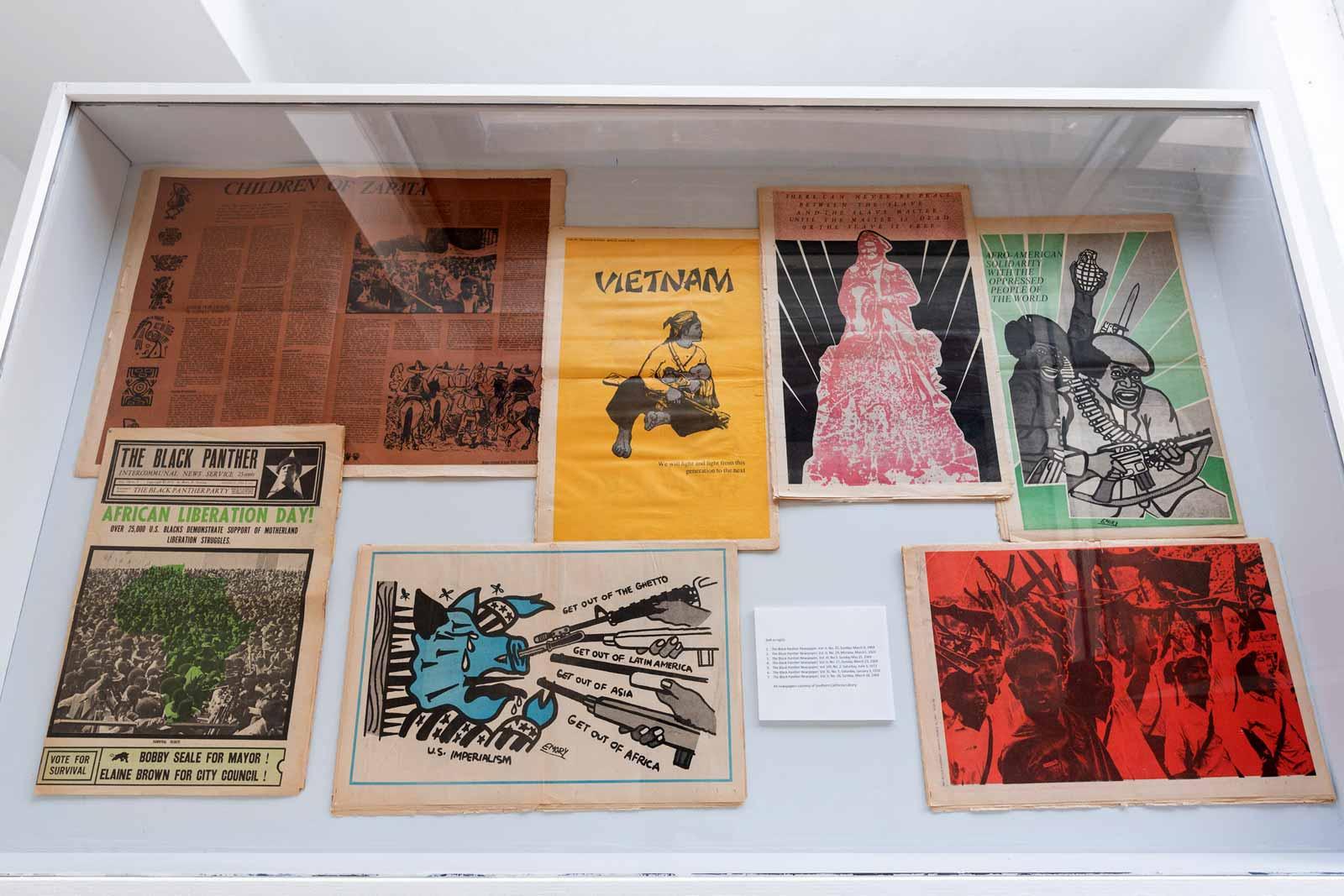 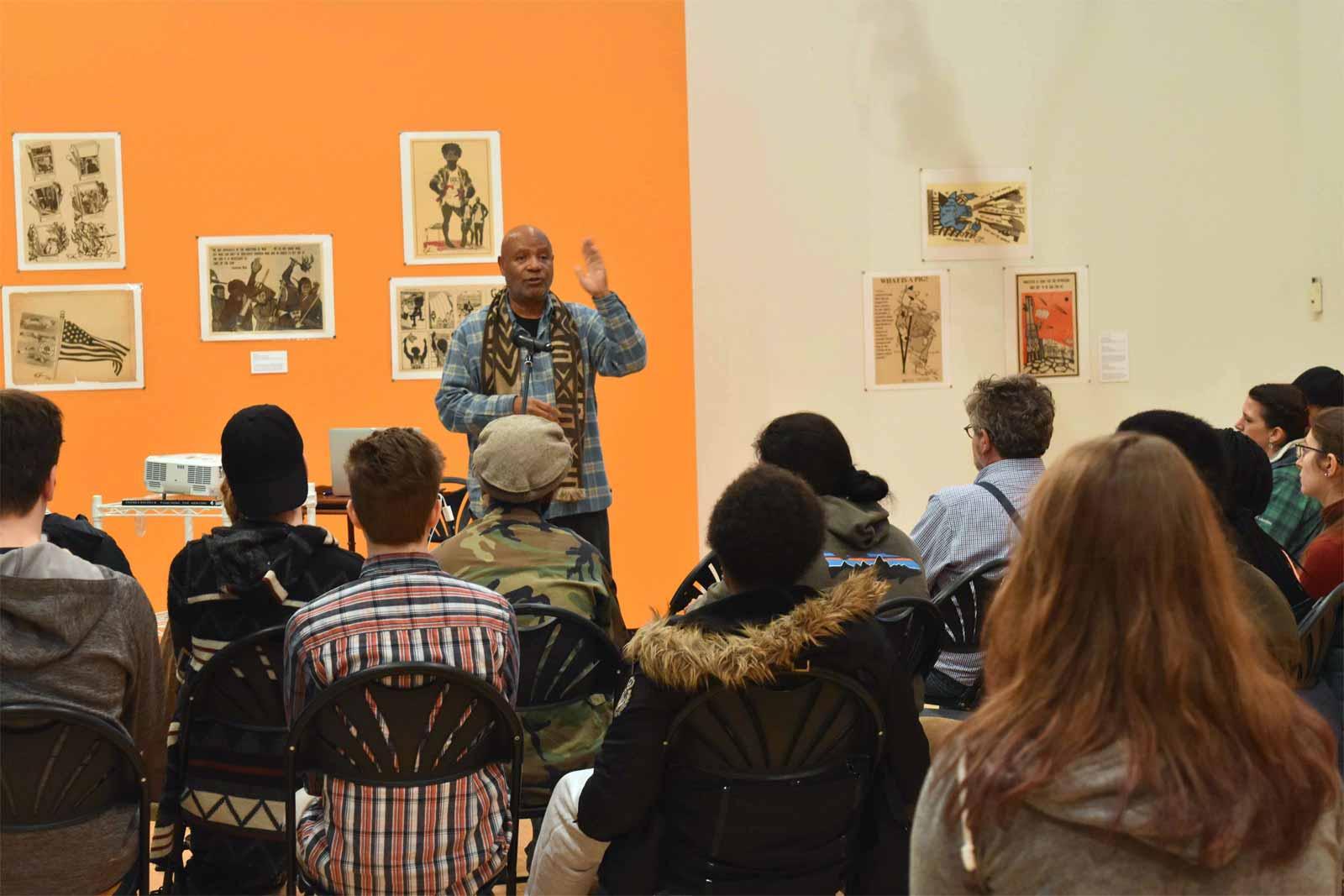 Emory Douglas in conversation with students at the Denison Museum, 2018. 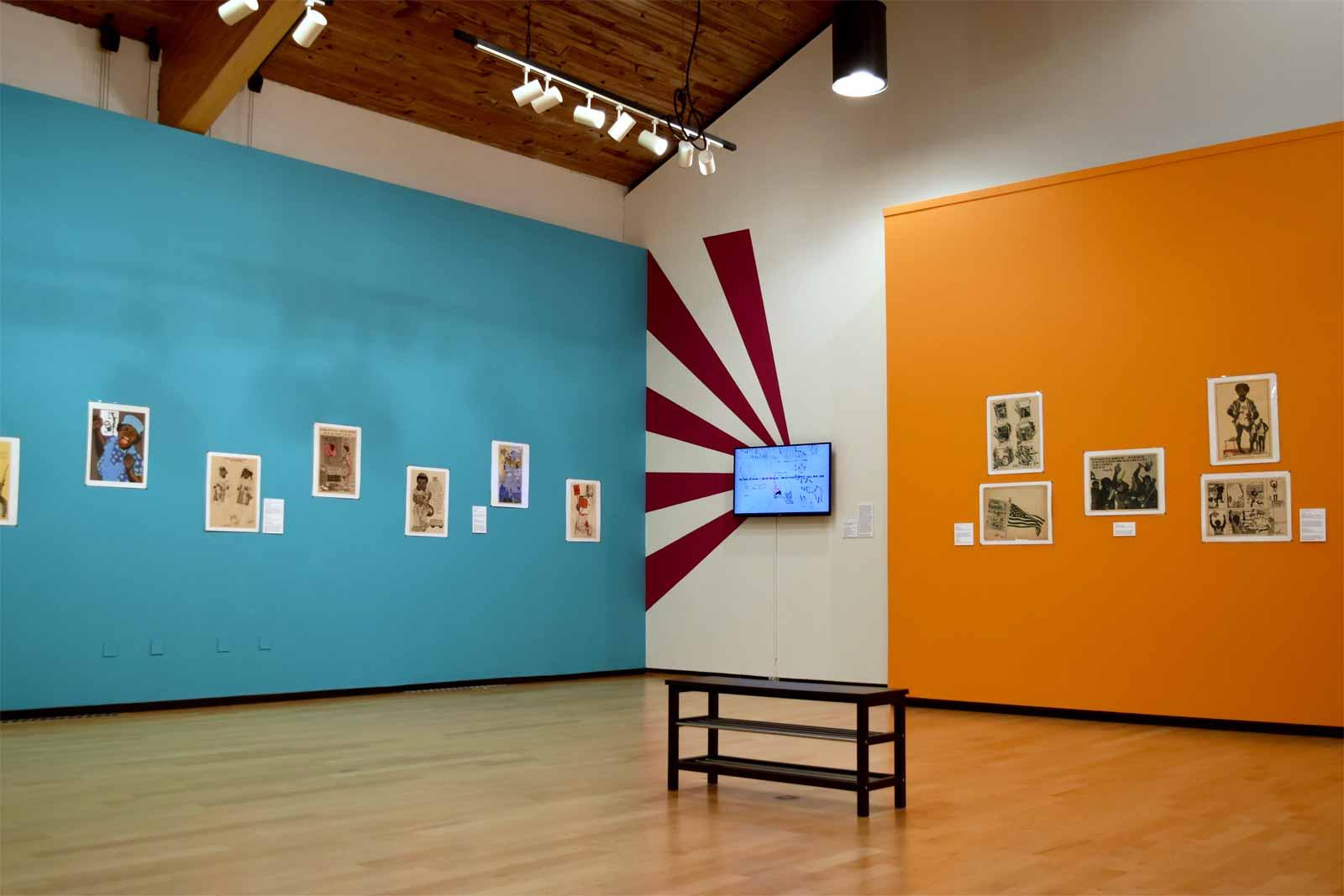 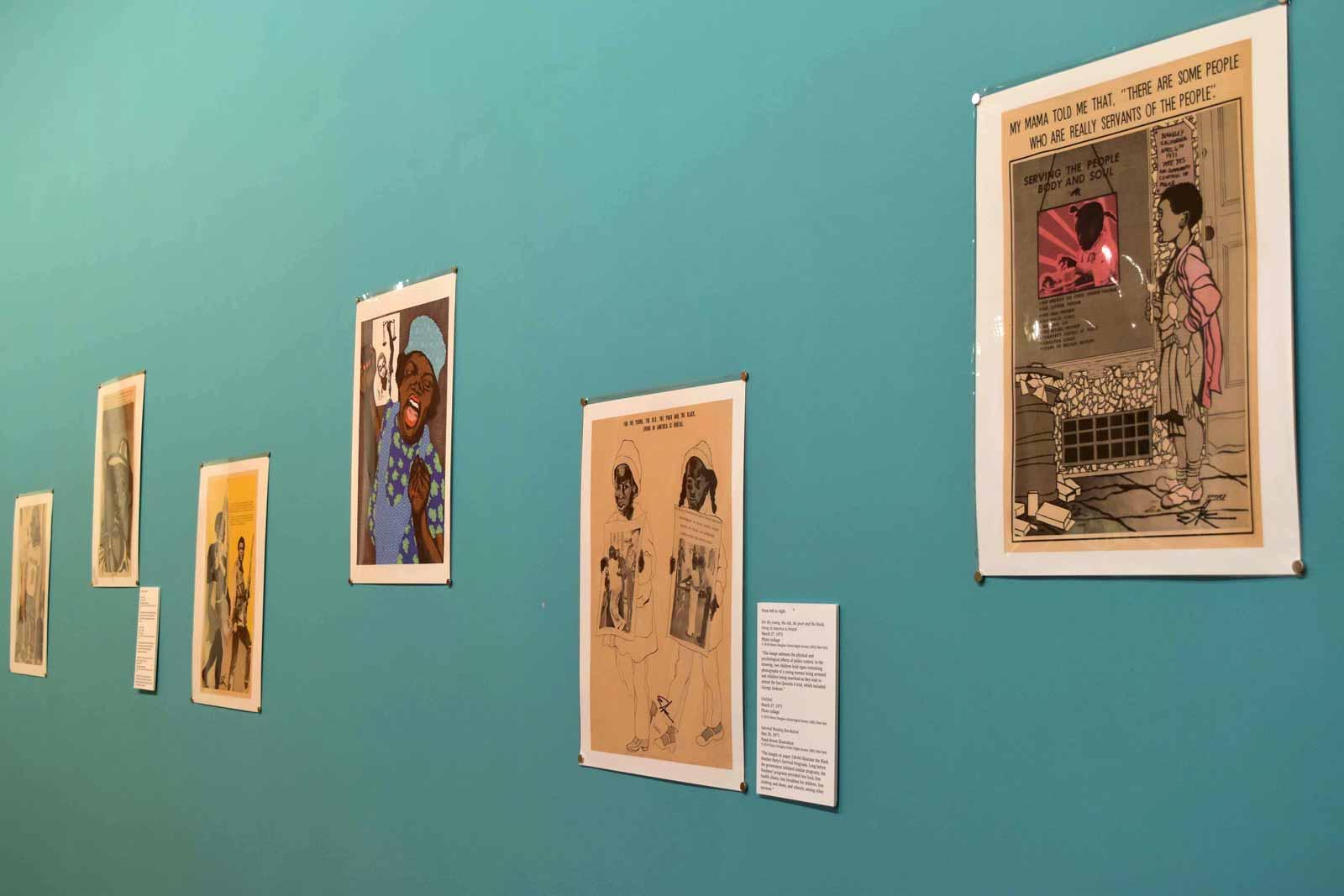 Most recently, Oscar and Peabody Award-winning filmmaker Spike Lee worked with Douglas to adapt his original image of anti-Vietnam war protest from the Black Panther Newspaper for a poster featuring the actors in Lee’s new Netflix film da 5 Bloods, released in March 2020. The film revisits the war from the perspective of five Black veterans.

Well-deserved accolades continue to pour in for Douglas. In 2015, AIGA, the Professional Association for Design, awarded Emory a medal recognizing “his fearless and powerful use of graphic design in the Black Panther party’s struggle for civil rights and against racism, oppression, and social injustice.” He was also the subject of two exhibitions in 2018. At Los Angeles Contemporary Exhibitions, Emory Douglas: Bold Visual Language showcased the posters Douglas designed that appeared weekly on the tabloid-sized back-page of the Black Panther Newspaper. Emory Douglas: Revolutionary Artist of the Black Panthers, an exhibition at the Denison Museum at Denison University had similar aims. In April 2019, the San Francisco Art Institute awarded Douglas an Honorary Doctor of Fine Arts, the highest honor bestowed by the institution.

Driven by his life-long passion and commitment to social change, the seventy-seven-year-old Douglas continues to collaborate with international organizations seeking social justice through projects like his artist-in-residency with EDELO, an artist collective in Mexico working with Zapatista women embroiderers. He has also lent his voice and vision in support of the Black Lives Matter movement. Police brutality, then as now, provided a spark that ignited the Black Power movement, and Douglas’ rendering of the police as pigs was his battle cry.

In international workshops, lectures, and exhibitions Douglas presents his work with great humility and a gentle, grandfatherly humor that contrasts with the biting critique communicated in his most provocative images. A profoundly effective artist and storyteller, Emory Douglas has created a legacy of visual representation of what is possible for the people of the world, accessible to all who chose to see it.