Football in American Art: 1933-The Present

Like many team sports in Western Europe and North America, American football first emerged as a game for upper-class young white men. Professional football dates to 1892, when the first college players began receiving financial compensation for play. Despite its relative paucity in the art world compared to other sports, artists have long been compelled by football’s contentious history, rules, players, and the fervent culture of fandom it has inspired throughout the United States. The game remains a uniquely American past-time—playing it, watching it, and identifying with its teams and athletes. And the relatively few artists who have explored it since its inception have been drawn to the cultural issues that accompany it: the beauty of the male athletic body in motion, celebrity culture, the physical duress and damage the game can cause, the passion it inspires in fans, and ever-present questions about sexism, racism, inclusion, exclusion, exploitation, and commercialism.

From honorary sculptures that celebrate athletic valor, to Realist portraits that humanize individual team members, to Abstract prints that raise uncomfortable questions about violence and pain, the following seven artists prove that this American cultural phenomenon is ripe for increasingly-diverse artistic engagement. 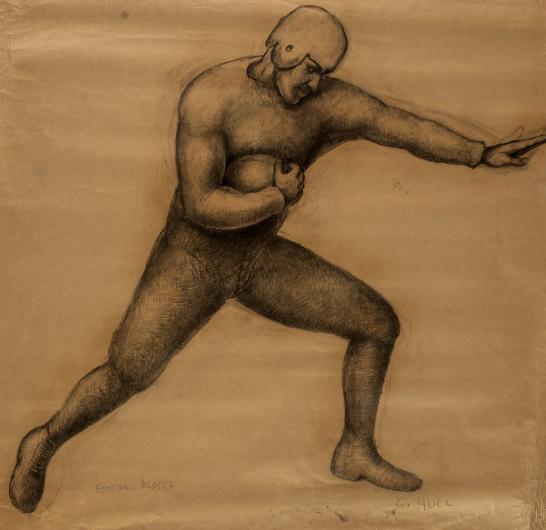 Hull’s drawing captures the visceral tension of a single athlete, clutching the football close to his torso while bracing for incoming contact. Hull has molded the player’s musculature with care to indicate the conditioning required of the sport. The artist started this drawing at a pivotal time in professional football history, when the game was beginning to divide into professional (National Football League) and college tracks. 1933 saw the very first national championship game. And in 1934, the first professional match was broadcast on CBS radio, solidifying football as a major spectator draw and an American pastime.

2 of 7
Courtesy Sotheby’s and Goldin Auctions 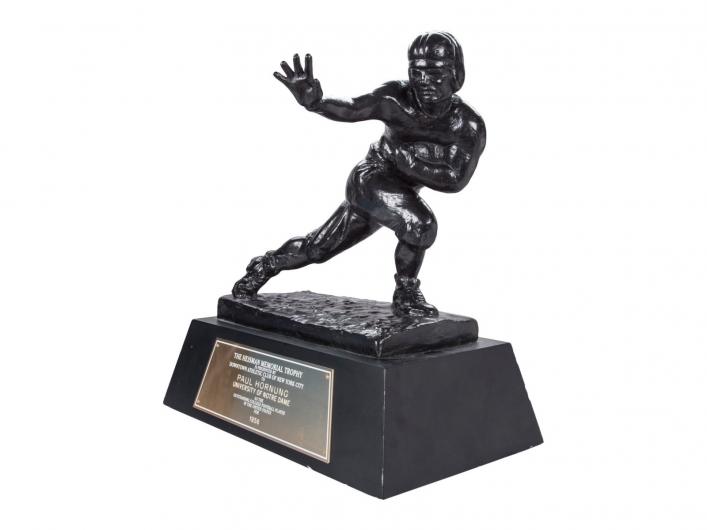 Eliscu was a celebrated American sculptor from New York whose best-known work is this trophy, awarded each year to an outstanding college football player by the Downtown Athletic Club of New York. This sculpture captures the dynamism of a running-back mid-stride; it invites viewers to feel the same excitement and tension they might experience in a live game. Eliscu has immortalized the moment of performance glory toward which all athletes strive. The piece is both a literal award and a startlingly lifelike display of human motion. It is a testament to the mythic aura surrounding many college players who hope to forge professional athletic careers. 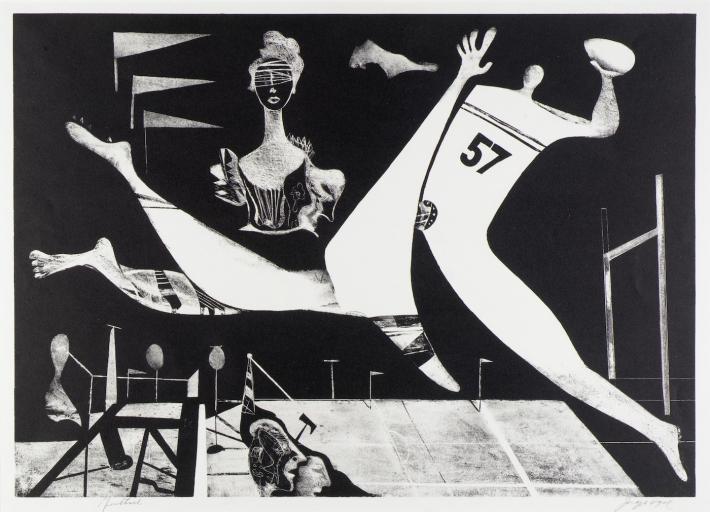 Vogel was an Austrian-born printmaker whose work was sponsored by the Works Progress Administration following the Great Depression. Here, players seem to fold into each other as they collide. Their limbs soar over a glowing football field, with an eerie hint of onlookers emerging from the white grass. The print reflects Vogel’s characteristic scathing cultural critiques and formal abstraction, with bodies taken apart, their features exaggerated, their pain almost visceral. Vogel explored themes he felt cut to the heart of early twentieth-century American culture, such as poverty, racism, and pastimes like sport, which often appear as violent and dark as his other subjects. 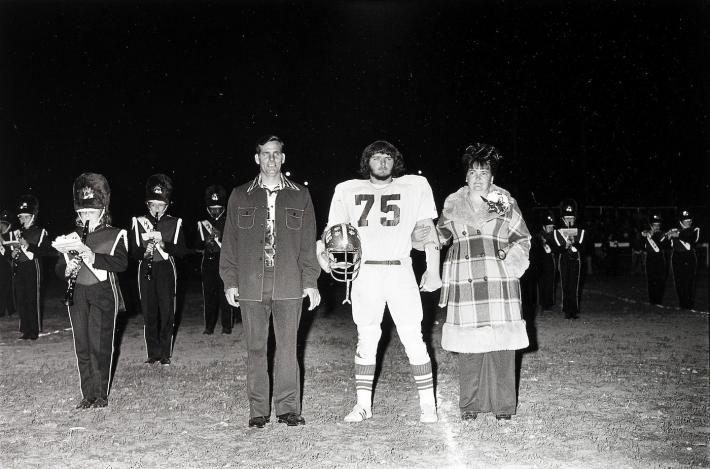 Wathen has been documenting scenes of American life since 1975, when he set out to take photographs in every county in Kentucky as part of the Kentucky Documentary Photographic Project. The initiative immersed Wathen, along with Bob Hower and Bill Burke, in the minutia and complexities of this often-overlooked part of the country. Here, an anonymous high-school player stands with his happy, if slightly uncomfortable, parents on the football field. Football is an important cultural staple, at once exceptional and quotidian: an opportunity for a teenager to differentiate himself from his peers through his physicality and for his town to celebrate its young men.

5 of 7
Image Courtesy of Baterby's Art and Framing 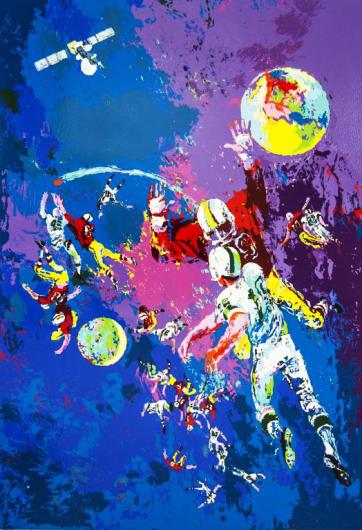 Neiman was a prolific American illustrator and painter who kept one foot in the sports realm throughout his life, working on high-profile commissions for major sports agencies. He was the official artist of the 1972 Olympics and 1978 Super Bowl. Over the course of the rest of his career, he tried to capture the drama and movement instilled by a wide variety of sports, from famous boxers, to basketball players, cyclists, and baseball players. Satellite Football is no exception. Here, football players ricochet through space, their movements elevated to otherworldly proportions amid a violet galaxy. The game seems to extend into the entire universe.

6 of 7
Collection of the Canton Museum of Art, Gift of Tula Corning in loving memory of Merv Corning, 2017.18 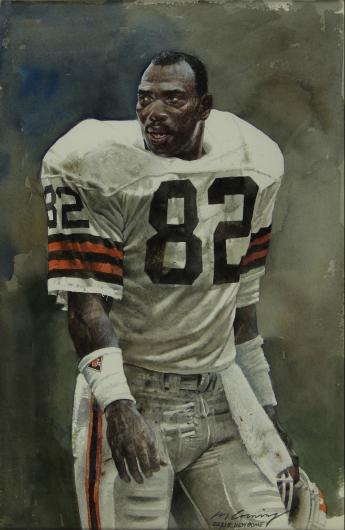 Corning was a self-taught painter whose work explores quintessentially American themes such as aviation and football. After completing his military service during the Second World War, he began his artistic career working in the American Realist style. Here, in one of his most arresting football portraits, Corning depicts former Cleveland Browns tight end Ozzie Newsome in a visceral, almost tactile way: Newsome is consumed by the game even as he pauses to catch his breath. By the early 1990s, when Corning painted him, Newsome had won a number of awards for his athletic grit and community service.

7 of 7
Image courtesy of the artist.

Blanton is a Florida-based Contemporary artist specializing in sports subjects. In her Footballers, isolated players move rhythmically in an imperfect, yet pattern-like spray across an ivory surface. The background calls to mind a vast playing field upon which her anonymous athlete-subjects barrel infinitely toward the viewer. The result is a hypnotic canvas that hints at the discipline that the game demands of its players. The painting also celebrates the aesthetic pleasure of competition and human performance, while also hinting at the dehumanizing potential of professional spectator sport.