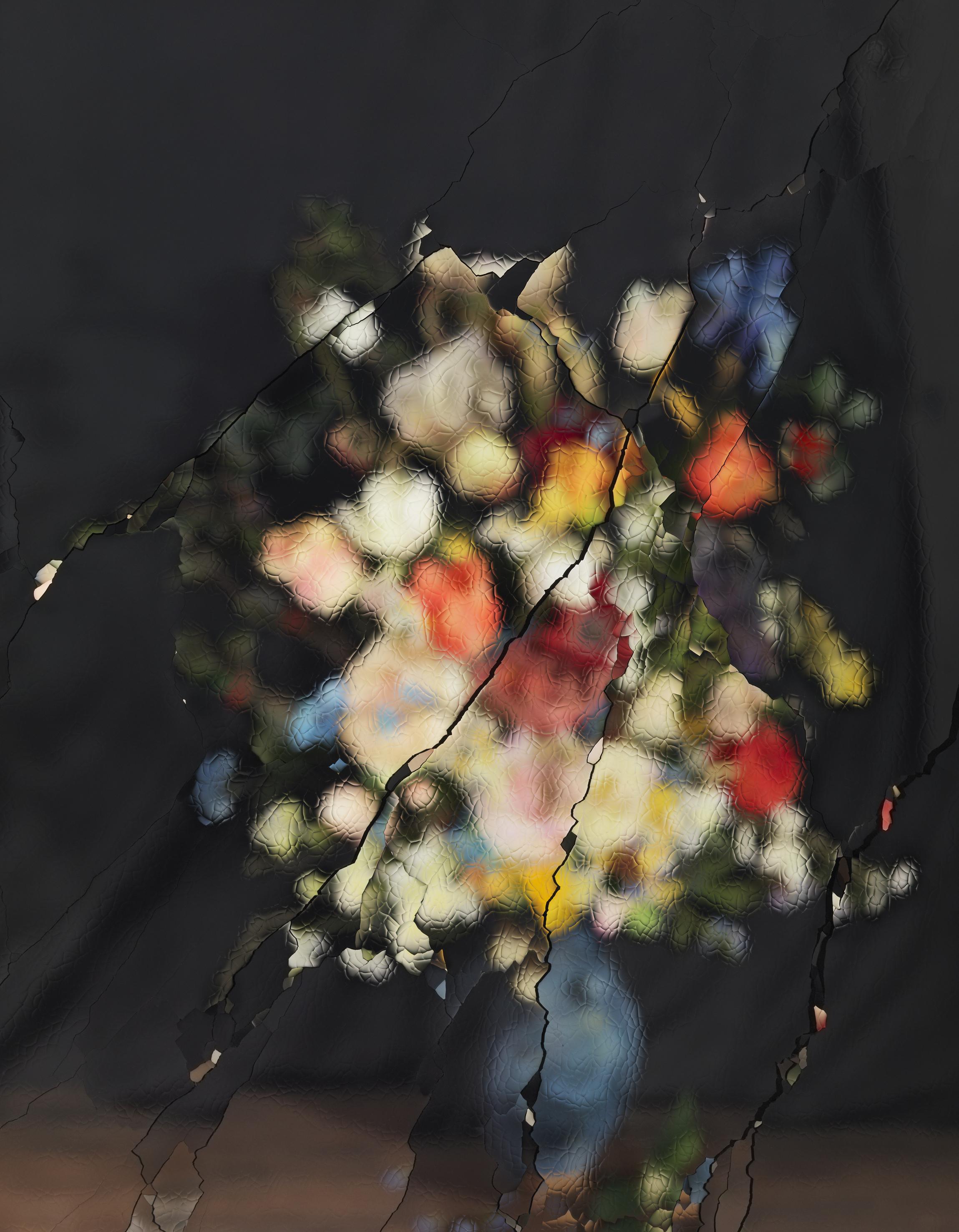 “It is not about resolution,” Gersht told me recently. “They can never reconcile. They can never find a place where they can live together.” Gersht was not discussing genocide or some war-torn part of the world, topics that are often the subject of his photography. He was discussing ideas. Gersht is influenced by Walter Benjamin’s dialectical approach to thinking about time. “[Benjamin] had this great desire to crash [conflicting ideas of time] and try to bring them together,” Gersht said. “I keep coming across Benjamin’s writing, and it is always so relevant and so influential to me...I can talk about Benjamin quite a lot...He is always hovering there, always present.”

Like Benjamin, Ori Gersht is a Jewish intellectual who thinks about time, violence, and reality. While Benjamin used words to explore and communicate his ideas, Gersht uses photography and film. Gersht, recognized among the world’s greatest living photographers, is an artist with exceptional skill and vision. His work does something that only great works can do: they inspire reflection rather than demand it. His work visually seduces on first glance then haunts you afterwards, like a dream of a departed loved one. In our current era of grotesquely provocative art, Gersht’s work is a testament to an oft-forgotten truth: Good art shocks, great art whispers. 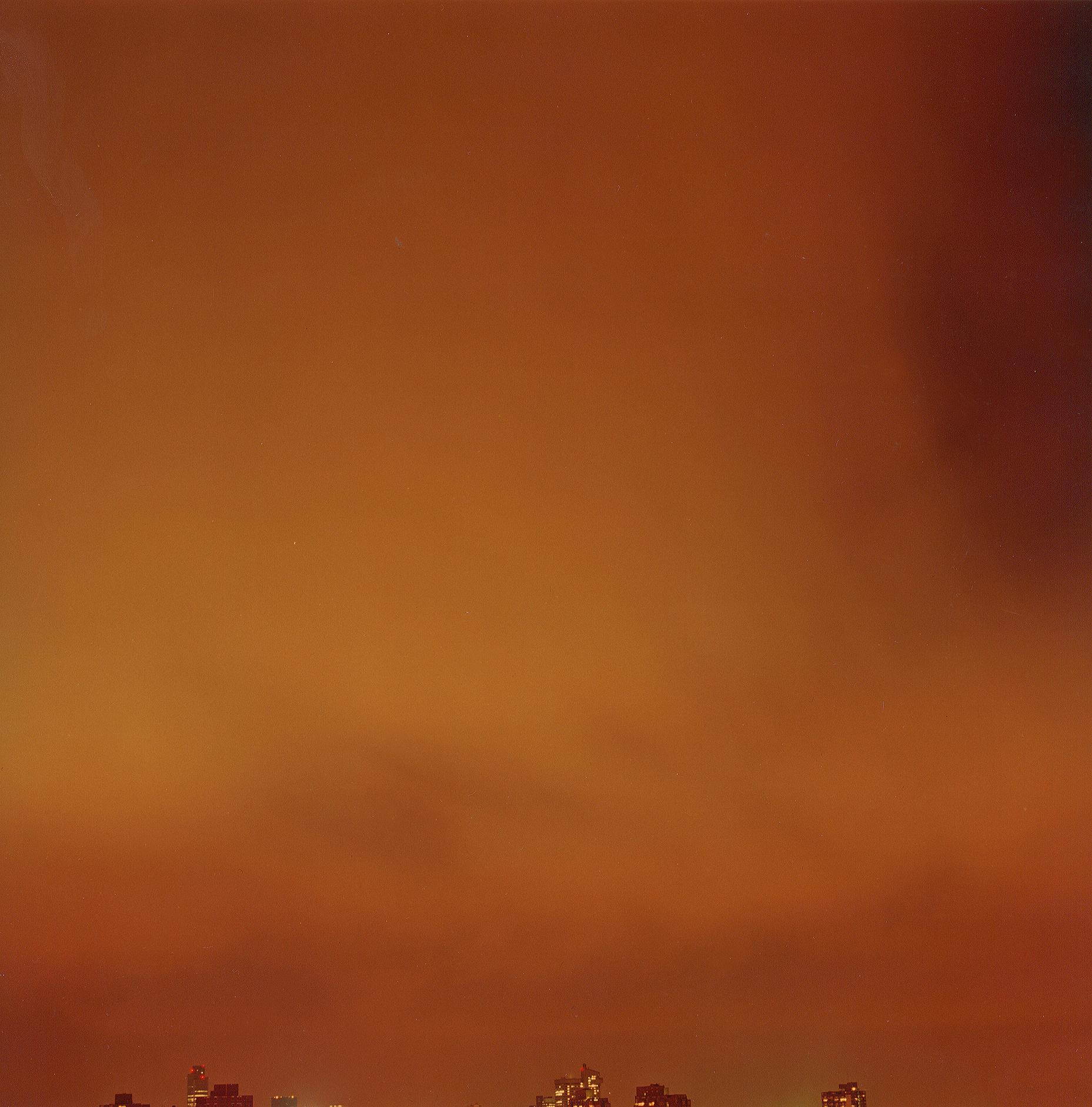 Ori Gersht was born in Tel Aviv in 1967. He credits his birthplace and the Holocaust experiences of his family as sparking his interest in time and violence. “I was brought up with a particular perception of history. I left Israel, and I realized it is a place of multiple historical narratives and points of view. I became less interested in certainty and more interested in doubt.” Gersht pushed his photography to a point where it creates “images that are somehow in a phase of becoming, neither here nor there.”

Gersht’s interest in photography began at an early age. After moving to the United Kingdom, Gersht studied film and photography at university. He eventually received his M.A. in Photography from the Royal College of Art in 1995. It was during this period that Gersht began his first photographic art series, Rear Window. The series attempted to capture the essence of London as a city, but it ingeniously subverted traditional conceptions of cityscape by capturing the sky just above the city rather than the city itself.

“What I started to realize,” Gersht said, “was that according to atmospheric conditions and cloud formations, the light that is emanating from the ground is trapped in the sky and clouds. According to the length of the exposure and the seasons, I started to get all these colors which were reflective of London without depicting it.” The resulting images in Rear Window were almost abstract. “One of the things that interested me was the point at which the photograph collapses and loses its integrity as a photographic document.” 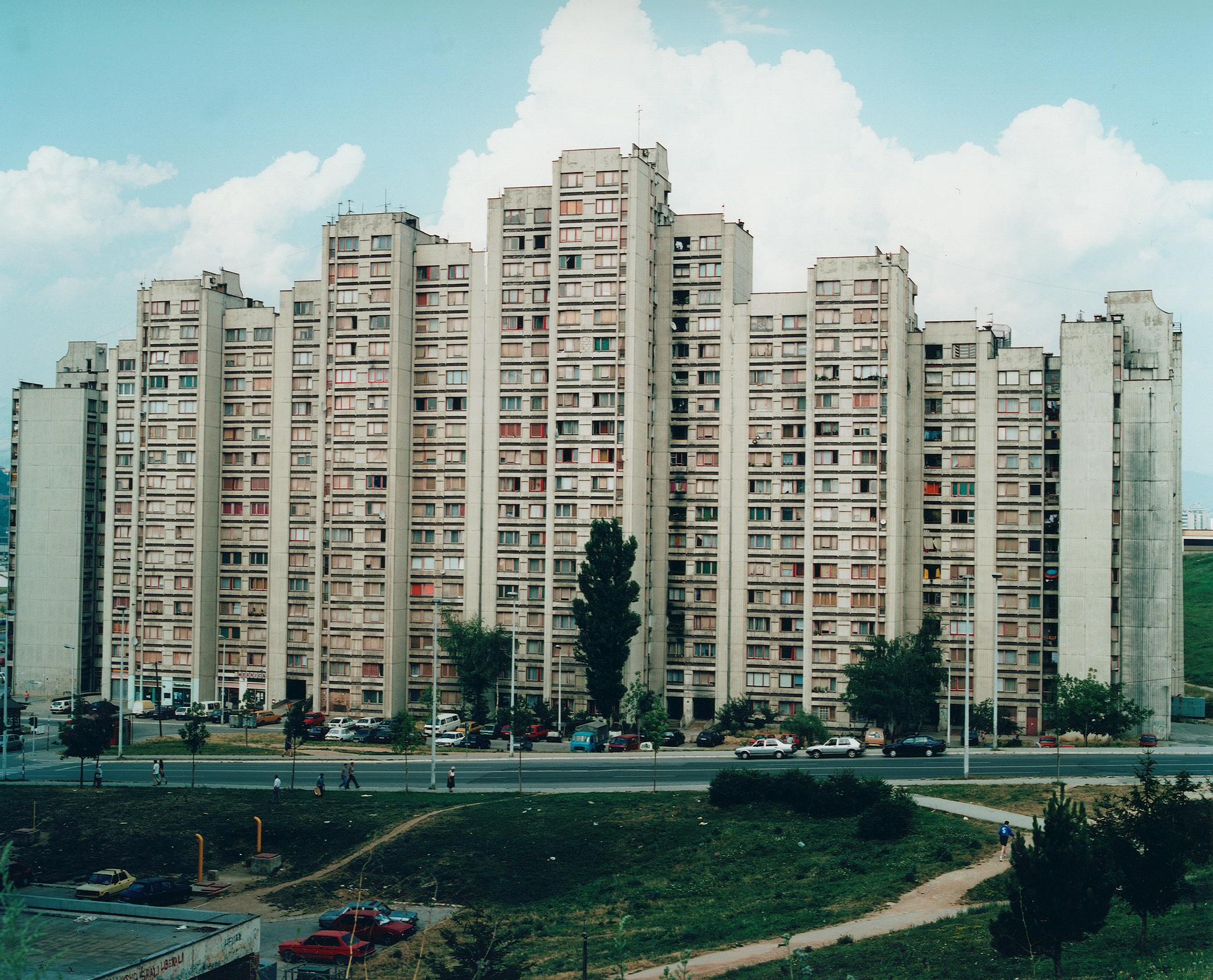 Gersht followed up Rear Window with several series that focussed on global conflict, often traveling to the places where these conflicts had taken place. In the late 1990s, he journeyed to Sarajevo where his series Afterwars explored how the city was renewing itself in the wake of the Bosnian War. For his series White Noise, Gersht traveled from Auschwitz and Belzec via train. He explored how one is able to “describe indescribable” tragedies like the Holocaust. The photographs that emerged were blurry snaps of frozen landscape taken from his train’s window. They are both fleeting and eternal, beautiful and chaotic. These seemingly contradictory attributes have become important themes in nearly all of Gersht’s subsequent series.

Travel remains an important part of Gersht’s work. His 2016 series Floating World involved travel to Japan to capture the reflection of greenery in Zen garden ponds. “When I travel,” says Gersht, “I travel completely on my own. There is almost a meditative element...it’s a very focused and intense process. Sometimes the work emerges, but sometimes it doesn’t at all.” Gersht lets the series develop naturally. For a series to take shape, he said there has to be an alignment with “the reason for the journey, the things that I encounter, the visual experiences, and contemplation that leads to something I that couldn’t anticipate.”

During the 2000s, Gersht began experimenting indoors. Two series from his studio that won him critical acclaim were Blow Up, exhibited at Yale, and Pomegranate, shown at the Jewish Museum in New York City. Both of these series involved photographing the destruction of objects close up. In the case of Blow Up, flower arrangements were captured at the moment they were being exploded. Pomegranate shows a bullet passing through the fruit in the moment when the bullet is not visible. It appears as if the pomegranate is exploding from within.

Both Blow Up and Pomegranate allude to art history, specifically Dutch still life and vanitas paintings. In many ways, Gersht seems to be a kindred spirit to the old masters, though calling his work derivative would be a step too far. Gersht likened the beauty and violence of his images to that of Caravaggio's David with the Head of Goliath. Gersht said that the beauty of an image is “a place to bring the viewer in and to start the challenge of the viewer from.” He went on to add that, “I’m very much driven by the immediate impact of the seductive nature of the image, and then all the other things that I’m dealing with are always embedded. I have a certain confidence that I can plant those seeds, and they hopefully will emanate and start to confront the viewer in different ways on a second reflection.”

Gersht’s work has become increasingly technical in recent years, both in terms of how his images are captured and how they are produced in his studio. In a world increasingly saturated with images, it is this painstaking work that makes Gersht feel his work is art. “Anyone can take a photograph,” Gersht told me, “but there is a level of engagement and complexity both visually, textually, and conceptually that I hope is providing an experience that is distinguished and reflective of the level of dedication and commitment.” 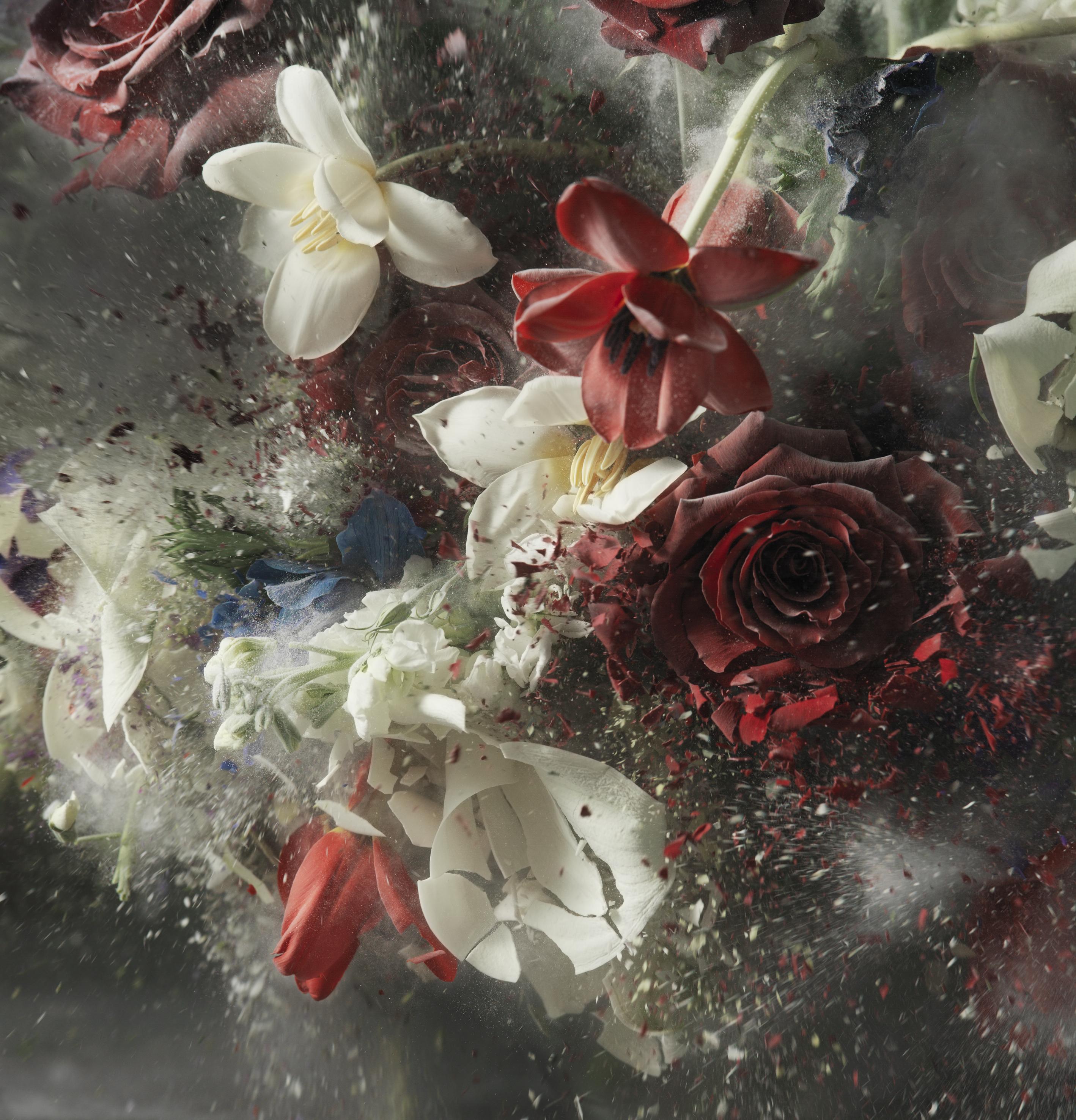 At the 2019 Armory Show, Gersht exhibited his latest series, Fragile Land. The ambitious project involved collecting endangered flowers from Israel, which are highly valued by both Jews and Arabs there (Gersht worked with a group to ethically obtain indigenous bulbs). He then captured images of single flowers in stages of violent transformation. For instance, in one image, he captured a flower dipped in liquid nitrogen. “I tried to photograph them in a stage of flux, so either between two phases or very unstable,” said Gersht. “I was thinking about the image of the burning bush in the Bible. Moses is seeing something being consumed but also rooted to the ground...between a physical and metaphysical state.” 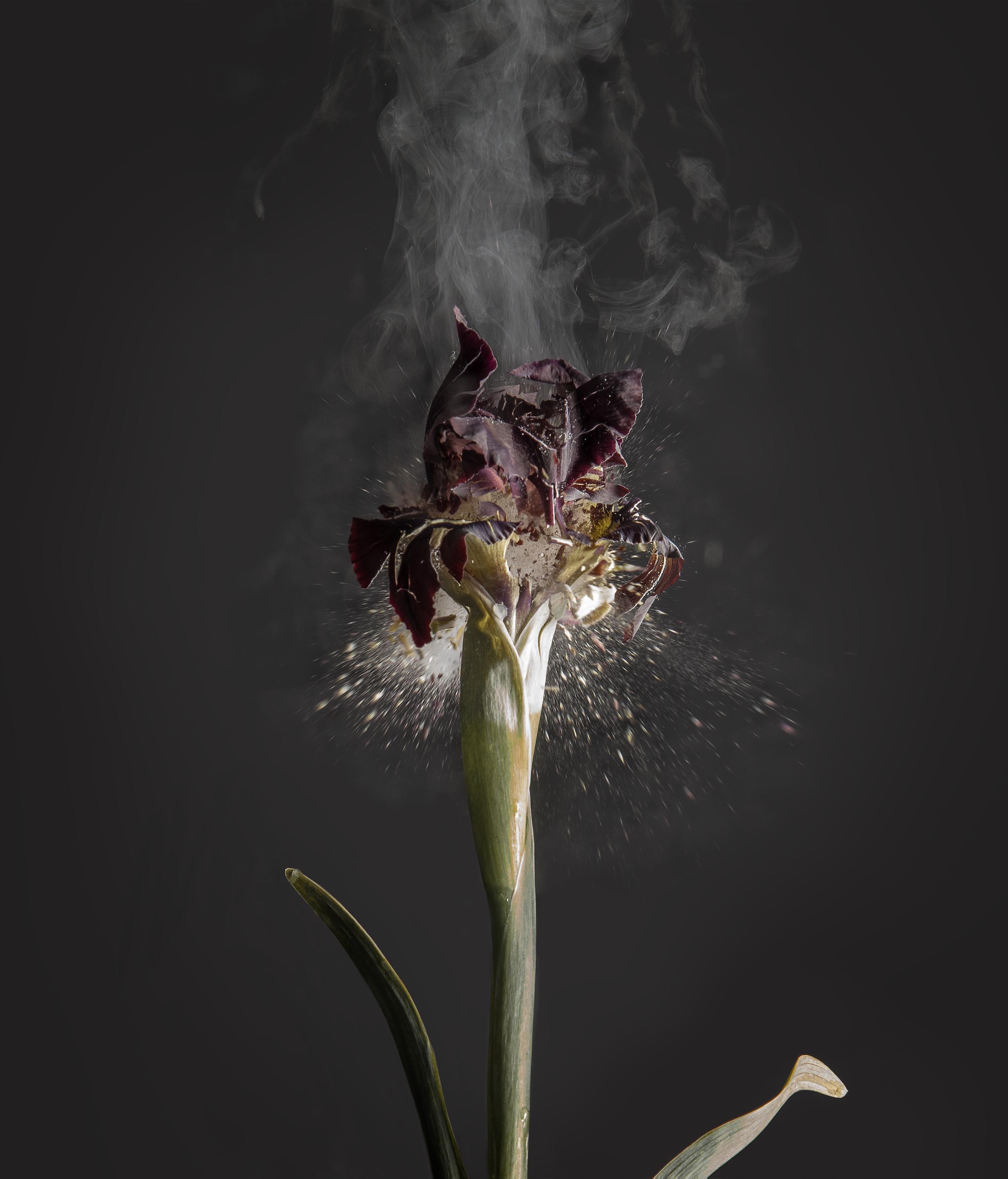 Whether it was his early series in Bosnia or his latest series with flowers, Gersht’s exploration of time, violence, and reality has remained relatively constant in his career. For work that deals so much with the shared human experience, people are curiously absent from his work. This was a conscious choice. “One of the things that happened quite early on in my photographic practice was that the presence of humans disappeared completely. I kind of felt a great unease with the moral responsibility with photographing people,” said Gersht. “The elimination of humans allowed me to move into a much more metaphorical and poetic space.”

Gersht was initially hesitant to discuss his thoughts about violence outside of his work, speaking mostly abstractly. Within the context of his work, he said, “It’s not about moral position. It’s about dialectical tension.” He noted that he found it interesting that the “terminology of photography,” words like load and shoot, is also the “terminology of aggression.” When asked for his thoughts on what it means that violent images can now arrive unannounced into our lives, as was recently the case when the Christ Church Massacre was live-streamed on Facebook, Gersht said he sees natural forces, rather than cultural forces, driving the technology that is now overwhelming us. He pondered, “Are we leading these processes or are we led by them?”

Towards the end of our conversation, I asked Gersht if photography is capable of revealing historical truth. “There can not be one historical truth,” he said. “I think this is part of our demise that we tend to pursue the world from a very narrow prism. There are multiple narratives, but it is very difficult for us to grasp...but we need to strive, too, because it will make us better and everything around us better. But it’s not simple.” Gersht’s words remind me of a quotation from Walter Benjamin: “Truth resists being projected into the realm of knowledge.” If Gersht is correct in his belief that truth is an amalgamation of perspectives, it seems like a safe bet that his perspective is a vital one.