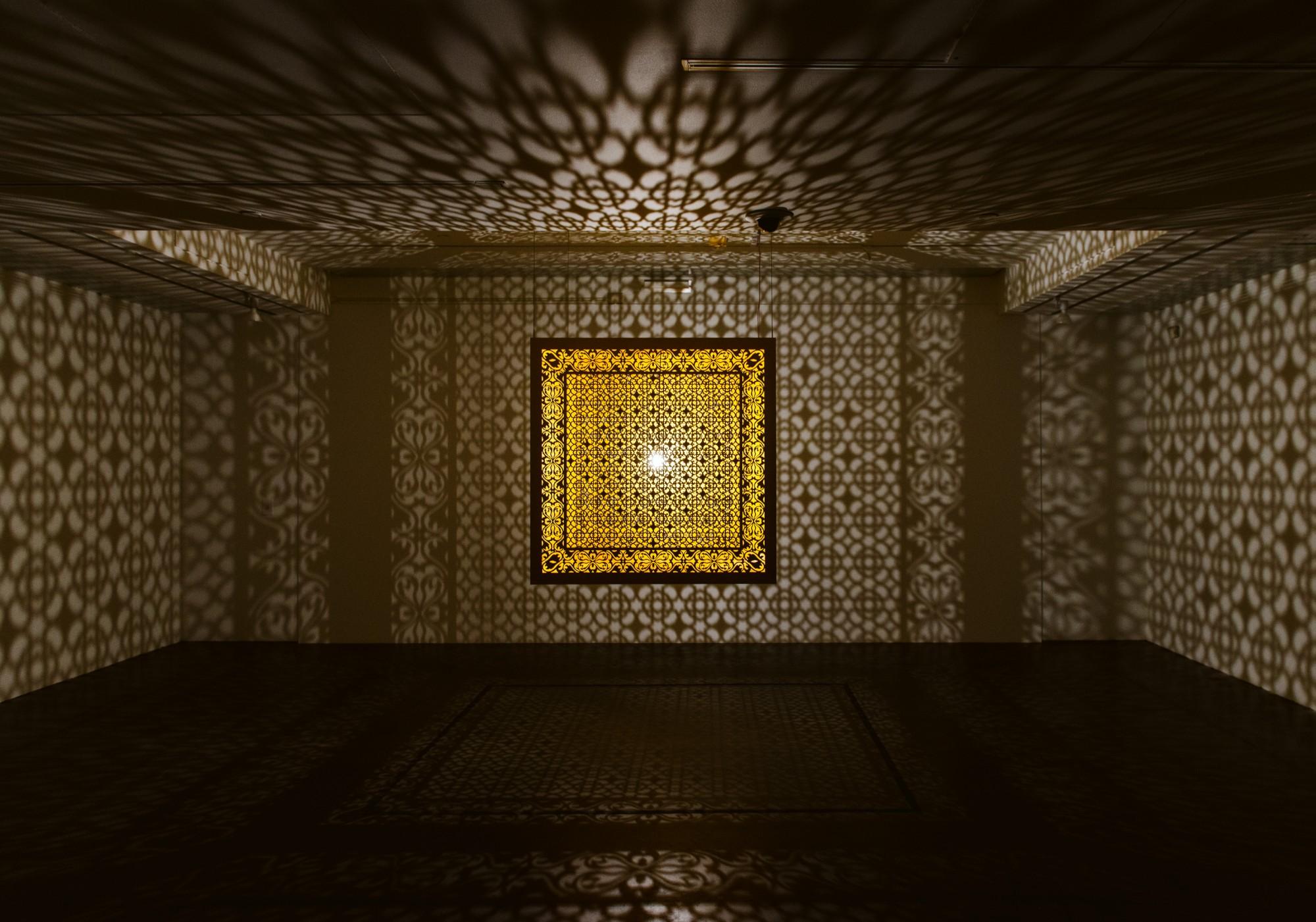 When so much of contemporary art feels like an assault on our senses reflecting the political, cultural, environmental, and psychologically fraught moment we find ourselves in, Transcendent: Spirituality in Contemporary Art, an exhibition in a variety of media by seven nationally and internationally known artists offers a respite. With their unique global perspectives, the featured artists offer visitors a chance to see art that challenges and expands notions of spirituality.

Leaving behind the mobs of holiday shoppers on the main thoroughfare in Vermont’s largest city, a gently rhythmic audio immediately envelops you upon stepping through the large glass doors at Burlington City Arts. As you move into an airy, sanctuary-like gallery space your mind has an opportunity to slow down and your body a chance to breathe.

More than providing atmosphere the 7.1 surround sound by Chinese composer Du Yun is an integral part of Disruption as Rapture, a 2016 HD video animation by Shahzia Sikander, a Pakistani-American artist and MacArthur “Genius” Award grantee who often collaborates with Du Yun. A chair is provided, allowing visitors to sit in front of Sikander’s large format 54” vertical monitor to experience the mesmerizing 10 minutes of visual storytelling told through layering and the constant movement of patterns, shapes, and color.

Classically trained in the art of Indo-Persian miniature painting at The National College of Arts Lahore, Pakistan, Sikander’s knowledge of India’s political history and relationship with the British Empire is supported by her superb draftsmanship. Her homage to tradition is subversive. Rather than offering benign respect she explodes the past, disrupting the image just as it seeps into your consciousness with a force that moves it beyond the frame. Gorgeously seductive, swirling figures coalesce and fragment, dissolving from macro to microcosm and back again. The hypnotic abstracted yellow orbs in Sikander’s Singing Suns (2016) are in sharp contrast to Du Yun’s frightfully discordant audio. Thankfully the curators give the option of viewing the piece with or without sound.

Having traveled to India, Turkey, Iran, Afghanistan, and Pakistan and hiked across the Himalayas in India and Nepal, Shelley Warren has had first-hand experience with the spirit of Buddhism that now infuses her work both in a physical and metaphorical sense. A multi-media artist trained at the Yale School of Art and co-curator of this exhibition with gallery director Heather Ferrell, Warren animates the inanimate by combining video projected on three-dimensional form. Although reminiscent of the work of Tony Oursler, Warren sidesteps his psychological discomfort. Reinforced by the titles of the three works all from 2019, Mudras, Pradakshina: A Devotional Practice, and When Pandit Hats Speak, Warren leaves little doubt regarding the source of her ideas. 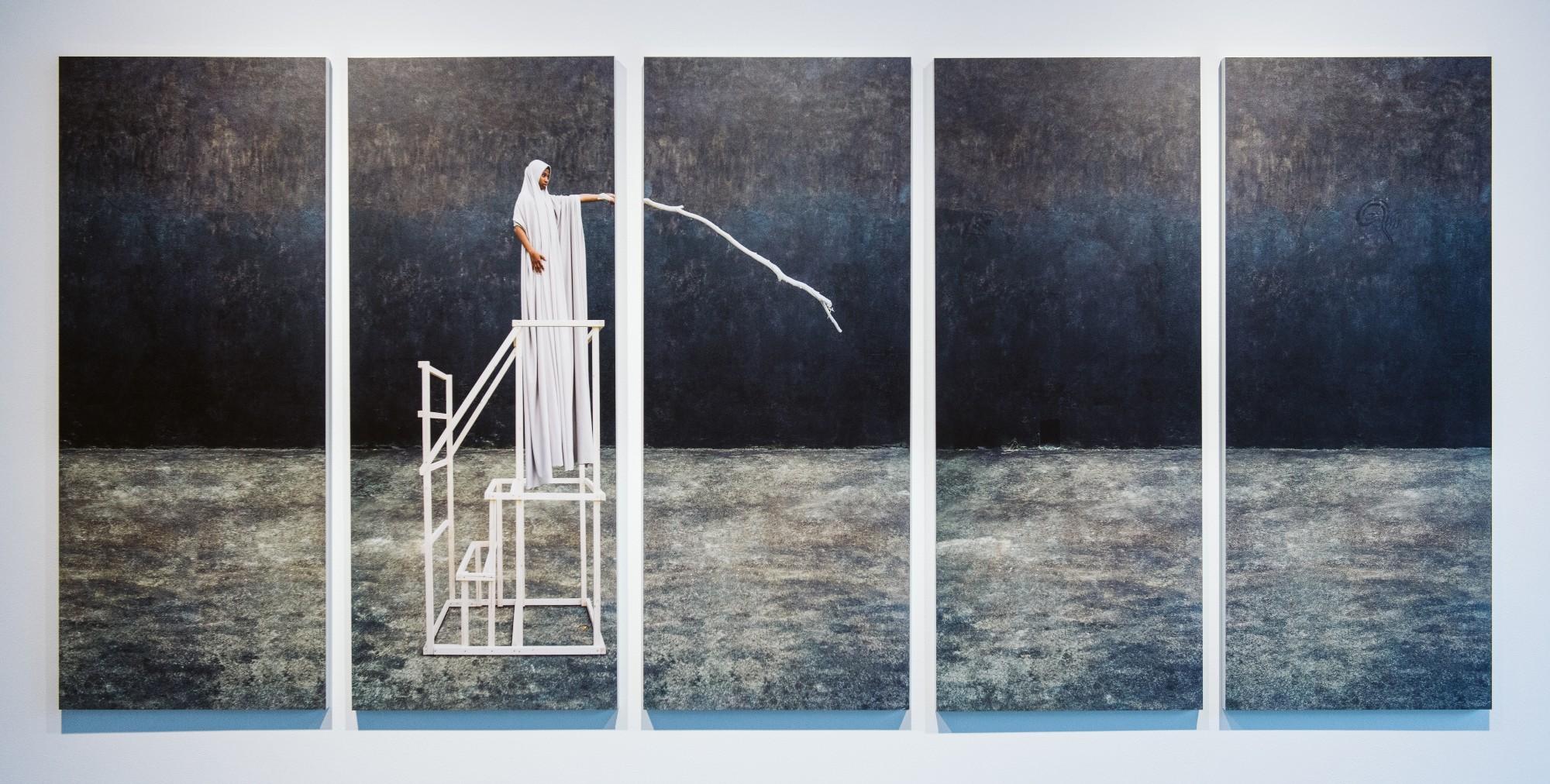 Born into a religious Italian-Catholic family, multimedia artist Maïmouna Guerresi embraced a Sufi-inspired Islam at the age of forty and currently lives in Senegal. In this exhibition, Guerresi’s five, arresting, large scale Lambda prints on dibond (a lightweight aluminum alloy) from her series Alisha in Wonderland (2016), command our attention while simultaneously projecting silence. In each image, a lone female figure clothed in a flowing hijab of a single saturated color either red, royal or cerulean blue, green or white is positioned against an ambiguous, gray, no-mans-land. The figure appears poised on the brink of action caught in a moment of anticipation. These works inspire a powerful narrative, with an unknown conclusion. 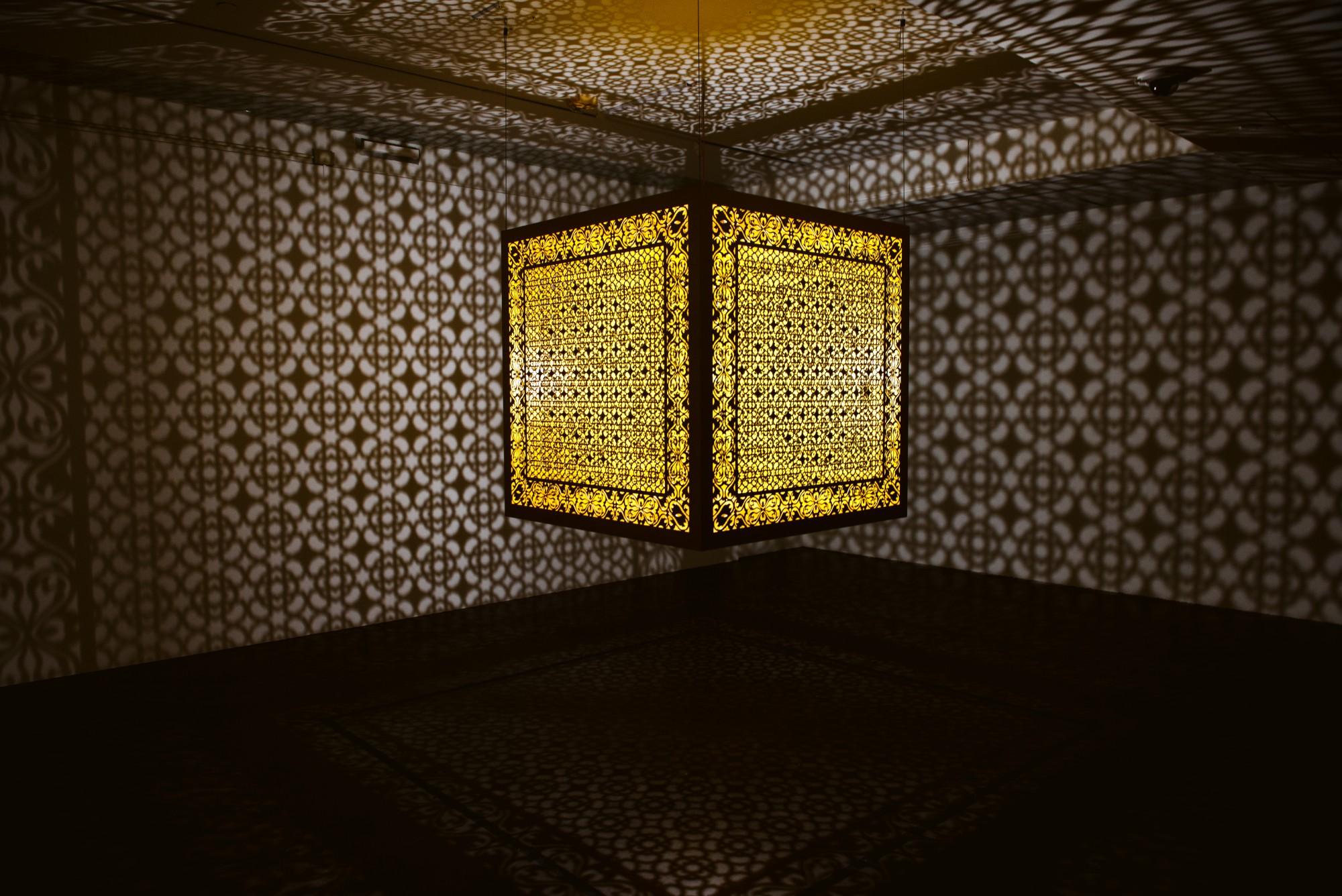 Dominican-American artist Leonardo Benzant comes from a very different religious belief system. His three sculptures made of textiles, glass beads, acrylic, string, coffee grounds and other miscellaneous material recall his Haitian heritage. He refers to his practice as Urban Shamanism. In the process of wrapping his forms, Benzant contains the energy of the sculptural object within itself. It is secretive, mysterious, hinting at ancestral spirits and natural forces. 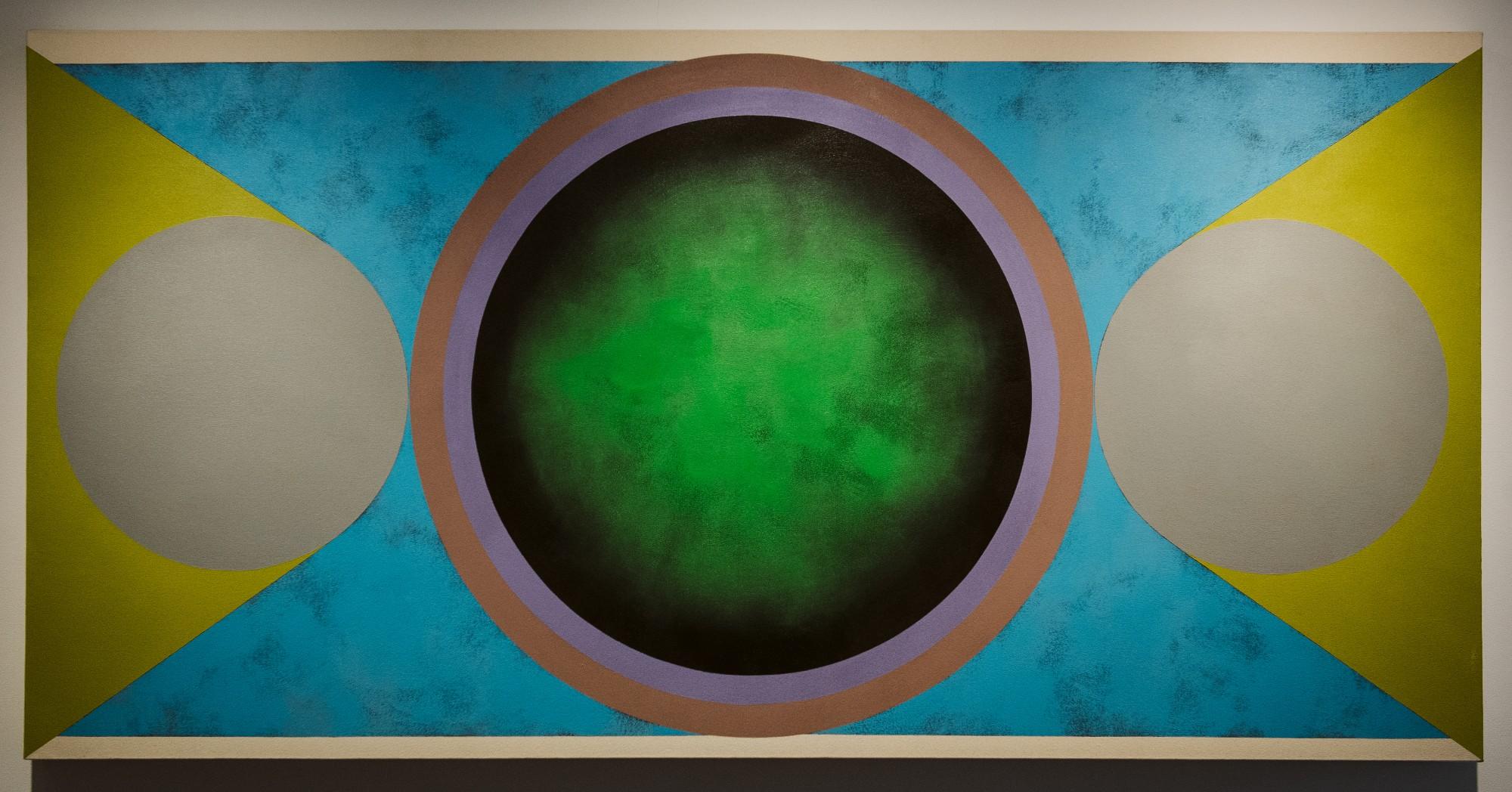 Painter Sandy Sokoloff does not believe in God, but Archangels, his cosmically infused series of abstractions demonstrate his belief in divine inspiration. Their pulsating energy reaches far beyond the canvas and frame. Alternatively, the modest print-based collages on antique and textured paper by 82-year-old Zarina Hashmi require a closer look. This Muslim-born Indian artist studied architecture and mathematics, both elements strongly felt in her delicately balanced works. Their quiet presence may, unfortunately, be overlooked in this seductive exhibition that offers a means to move beyond the moment into a timeless place.

Transcendent: Spirituality in Contemporary Art is on view at Burlington City Arts in Burlington, Vermont, through February 8, 2020.