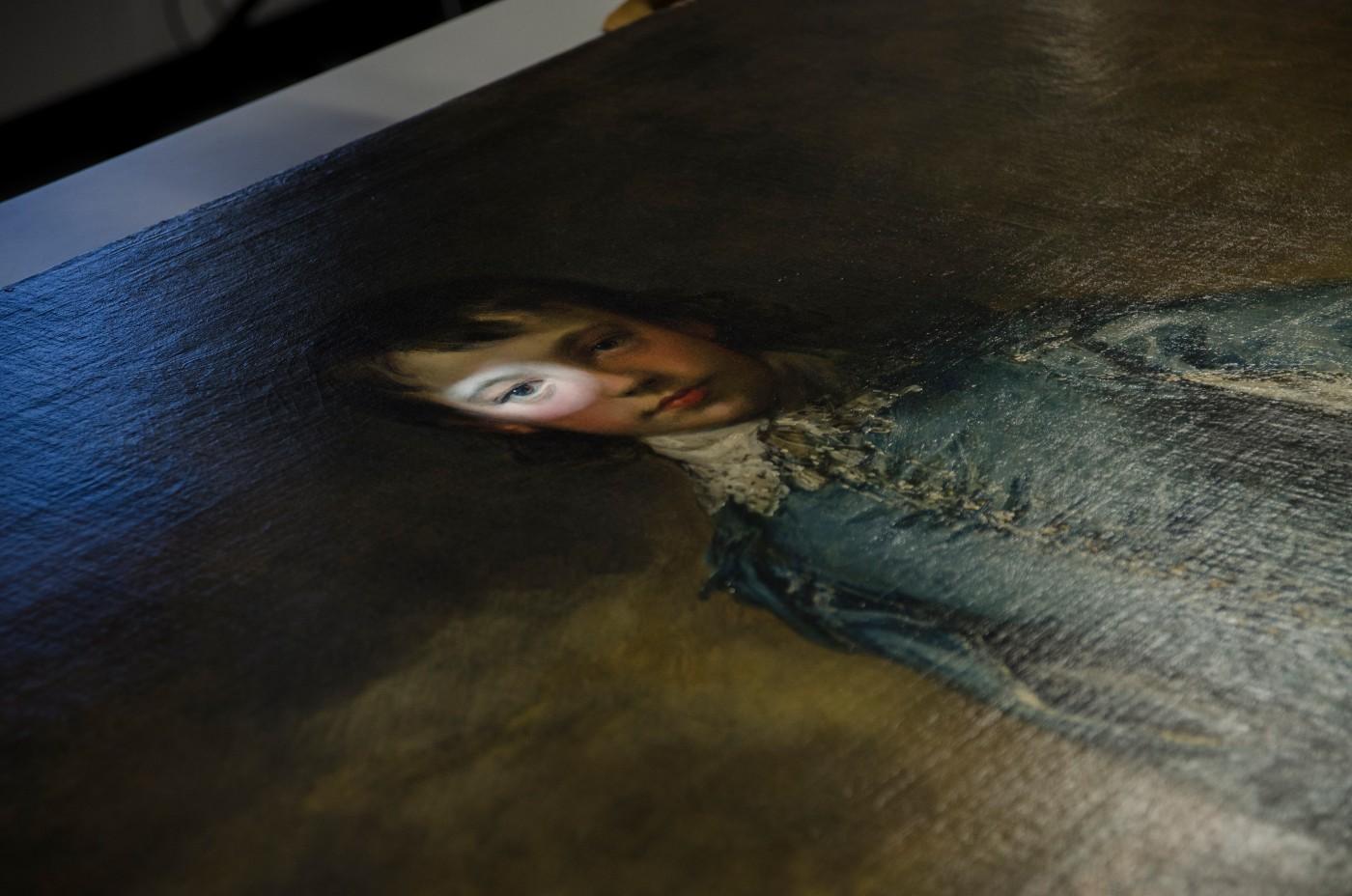 The Blue Boy’s eye is illuminated by the microscope’s lightsource. The microscope, designed for ophthalmology and hand surgery, is on loan from Haag-Streit USA for Project Blue Boy. (The photo was taken in Fall 2017 during a three-month conservation study.) 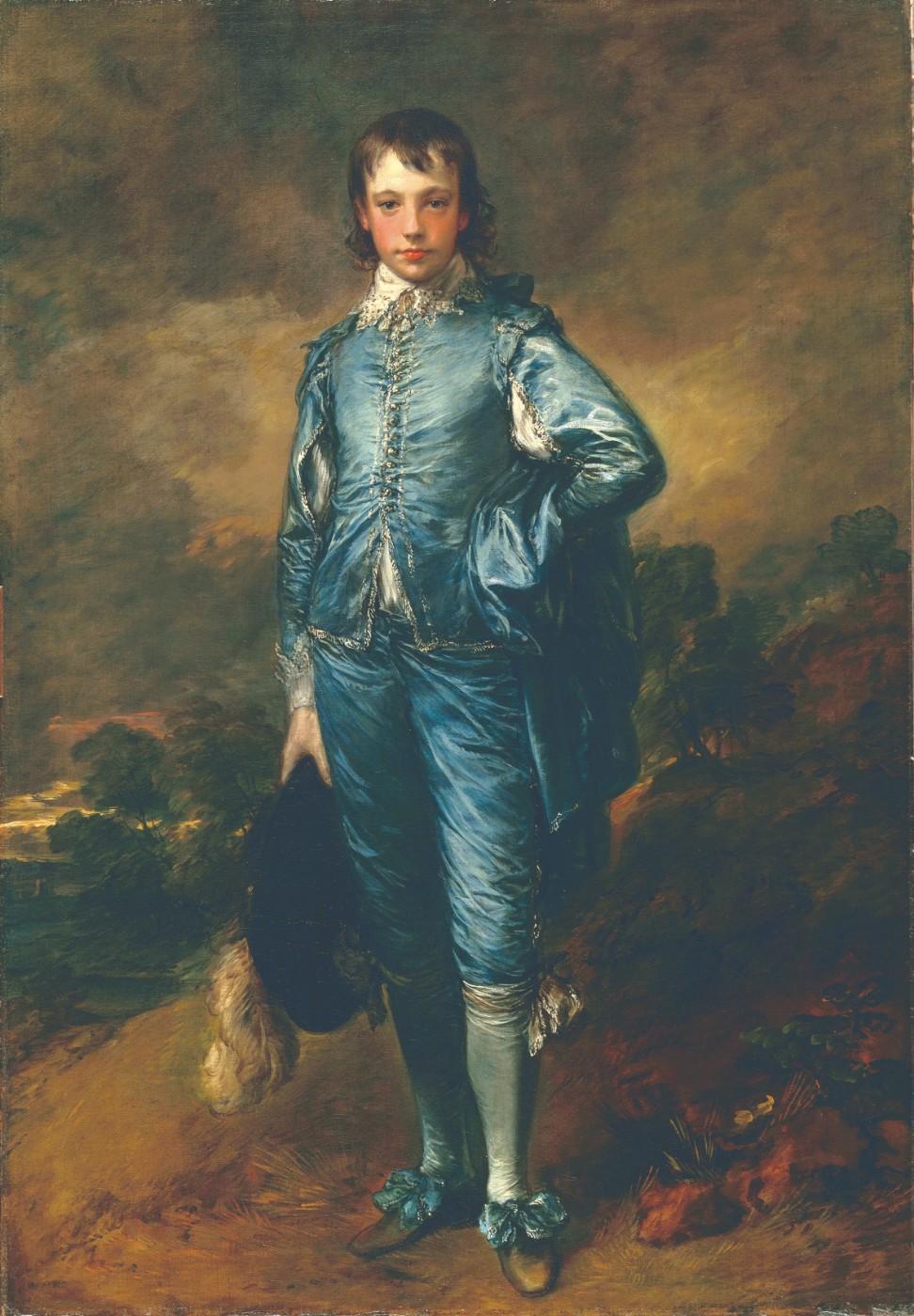 SAN MARINO, CA - The exhibition Project Blue Boy opened at The Huntington Library, Art Collections, and Botanical Gardens on Sept. 22, 2018, offering visitors a glimpse into the technical processes of a senior conservator working on the famous painting as well as background on its history, mysteries, and artistic virtues. One of the most iconic paintings in British and American history, The Blue Boy, made around 1770 by English painter Thomas Gainsborough (1727-1788), is undergoing its first major conservation treatment. Home to the work since its acquisition by founder Henry E. Huntington in 1921, The Huntington will conduct some of the project in public view, as part of a year-long educational exhibition that runs through Sept. 30, 2019.

The Blue Boy requires conservation to address both structural and visual concerns. “Earlier conservation treatments mainly have involved adding new layers of varnish as temporary solutions to keep it on view as much as possible,” said Christina O’Connell, The Huntington’s senior paintings conservator working on the painting and co-curator of the exhibition. “The original colors now appear hazy and dull, and many of the details are obscured.” According to O’Connell, there are also several areas where the paint is beginning to lift and flake, making the work vulnerable to paint loss and permanent damage; and the adhesion between the painting and its lining is separating, meaning it does not have adequate support for long-term display.

During three months of preliminary analysis—which was carried out by conservators in 2017, with results reviewed by curators—the painting was examined and documented using a range of imaging techniques that allow O’Connell and Melinda McCurdy, The Huntington’s associate curator for British art and co-curator of the exhibition, to see beyond the surface with wavelengths the human eye can’t see. Infrared reflectography rendered some paints transparent, making it possible to see preparatory lines or changes the artist made. Ultraviolet illumination made it possible to examine and document the previous layers of varnish and old overpaints. New images of the back of the painting were taken to document what appears to be an original stretcher (the wooden support to which the canvas is fastened) as well as old labels and inscriptions that tell more of the painting’s story. And, minute samples from the 2017 technical study and from previous analysis by experts were studied at high magnification (200-400x) with techniques including scanning electron microscopy with which conservators could scrutinize specific layers and pigments within the paint. Armed with information gathered from the 2017 analysis, the co-curators mapped out a course of action for treating the painting and developed a series of questions for which they are eager to find answers. Funding for the restoration and conservation work was made possible through a grant from Bank of America’s Art Conservation Program. 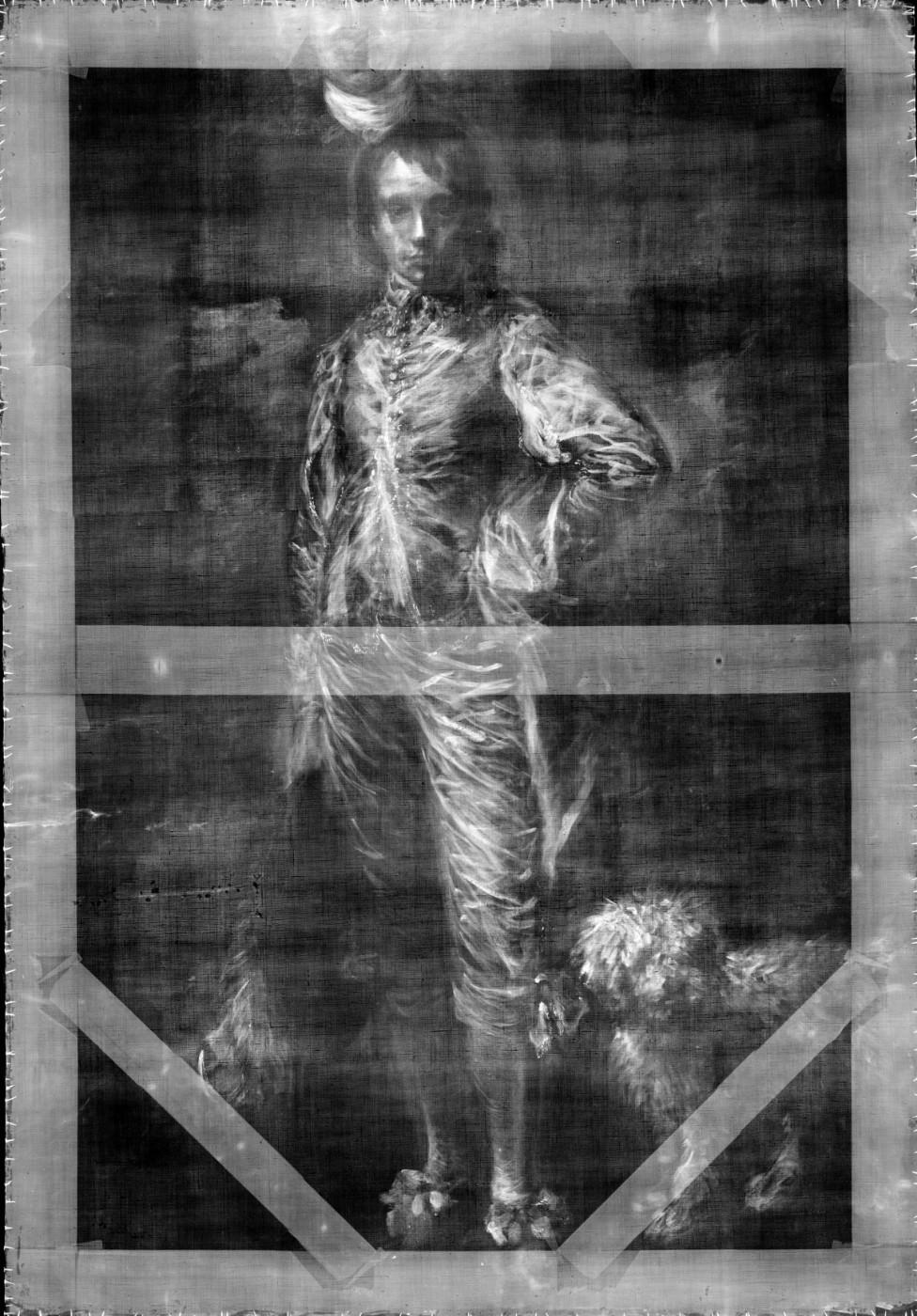 “One area we’d like to better understand is, what technical means did Gainsborough use to achieve his spectacular visual effects?” said McCurdy. “He was known for his lively brushwork and brilliant, multifaceted color. Did he develop special pigments, create new materials, pioneer new techniques? We know from earlier x-rays that The Blue Boy was painted on a used canvas, on which the artist had begun the portrait of a man,” she said. “What might new technologies tell us about this earlier abandoned portrait? Where does this lost painting fit into his career? How does it compare with other earlier portraits by Gainsborough?” As the conservation process continues, McCurdy also looks forward to discovering other evidence that may become visible beneath the surface paint, and what it might indicate about Gainsborough’s painting practice.

In fact, the undertaking already has uncovered new information of interest to art historians. During preliminary analysis, conservators found an L-shaped tear more than 11 inches in length, which data suggest was made early in the painting’s history. The damage may have occurred during the 19th century when the painting was in the collection of the Duke of Westminster and exhibited frequently. Further technical evidence combined with archival research may help pinpoint a more precise date for this tear, and even reveal its probable cause.

“Project Blue Boy” Visitor Experience
For the first three to four months during the year-long exhibition, The Blue Boy will be on public view in a special satellite conservation studio set up in the west end of the Thornton Portrait Gallery, where O’Connell will work on the painting to continue examination and analysis, as well as begin paint stabilization, surface cleaning, and removal of non-original varnish and overpaint. It then will go off view for another three to four months while she performs structural work on the canvas and applies varnish with equipment that can’t be moved to the gallery space. Once structural work is complete, The Blue Boy will return to the gallery where visitors can witness the inpainting process until the close of the exhibition.

During the two periods when the painting is in the gallery, O’Connell will work in public view on regularly scheduled days and times. For the first in-gallery period, from Sept. 22 through January 2019 (estimated), visitors can watch the process each Thursday and Friday from 10 a.m. to noon and from 2 to 4 p.m., and on the first Sunday of each month from 2 to 4 p.m. A similar schedule will be in place during the second in-gallery session, estimated to begin in summer 2019. Schedule updates will be posted on the web at huntington.org/projectblueboy.

When O’Connell is working in the gallery she might use any number of tools, the largest among them a Haag-Streit Hi-R NEO 900 surgical microscope that measures six feet in height. The state-of-the-art device has a long movable arm and optics that can magnify up to 25x to give the conservator a detailed view of the painting’s surface during the treatment stages, when special adhesives will be added to the areas of lifting paint. Many of the conservator’s hand tools will be showcased, giving visitors a chance to understand the precision inherent in the work.

“When the painting is not in the gallery, visitors will still have plenty to see,” said O’Connell. A display with multiple educational modules will tease out details relating to the project and illuminate the painting’s structure and materials, condition and treatment plans, and an explanation of the conservation profession. An interactive light box will show the latest digital x-rays of the work; one iPad will allow visitors to explore more deeply the conservation science involved, and another will provide historical background on the painting and artist. Actual conservation tools will be on display, and behind a low wall, the temporary conservation studio will be in plain view, equipped with all the necessary trappings—work tables, easel, conservation lights, and exhaust units, as well as a whiteboard where O’Connell will post updates on what is currently happening and the times when she’ll be available to answer visitor questions.

Also, specially trained docents will be stationed in the gallery throughout the run of the exhibition to illuminate the project and answer questions.

After the close of the exhibition, the painting will go back to the lab for final treatment and reframing. Finally, in early 2020, The Blue Boy will be rehung in its former spot at the west end of the portrait gallery and unveiled as a properly stabilized masterpiece with more of the vivid pigments and technical brilliance it radiated when it debuted at the Royal Academy some 250 years ago again visible to viewers.

The curators of “Project Blue Boy” plan to share their findings in lectures and publications after the completion of the project.

The Huntington's website will track the project as it unfolds at huntington.org/projectblueboy.

Related Programs
“Project Blue Boy” will be accompanied by an array of public programs, including scholarly lectures, curator tours, and family activities.

About The Blue Boy
Thomas Gainsborough was among the most prominent artists of his day. Though he preferred to paint landscapes, he made his career producing stylish portraits of the British gentry and aristocracy. Jonathan Buttall (1752–1805), the first owner of The Blue Boy, was once thought to have been the model for the painting, but the identity of the subject remains unconfirmed. The subject’s costume is significant. Instead of dressing the figure in the elegant finery worn by most sitters at the time, Gainsborough chose knee breeches and a slashed doublet with a lace collar–-a clear nod to the work of Anthony van Dyck, the 17th-century Flemish painter who had profoundly influenced British art.

The painting first appeared in public in the Royal Academy exhibition of 1770 as A Portrait of a Young Gentleman, where it received high acclaim, and by 1798 it was being called “The Blue Boy”–-a nickname that stuck.

Henry E. Huntington (1850–1927) purchased The Blue Boy in 1921 for $728,000, the highest price ever paid for a painting at the time. By bringing a British treasure to the United States, Huntington imbued an already well-known image with even greater notoriety on both sides of the Atlantic. Before allowing the painting to be transferred to San Marino, art dealer Joseph Duveen orchestrated an international publicity campaign that rivaled those surrounding blockbuster movies today. In its journey from London to Los Angeles, The Blue Boy underwent a shift from portrait to icon, as the focus of a series of limited-engagement exhibitions engineered by Duveen. The image remains recognizable to this day, appearing in works of contemporary art and in vehicles of popular culture—from major motion pictures to velvet paintings.

But beyond its cultural significance, the painting is considered a masterpiece of artistic virtuosity. Gainsborough’s command of color and mastery of brushwork are on full display in the painting, and they are expected to become more apparent as a result of “Project Blue Boy” conservation work.

Credit
Conservation of The Blue Boy is funded by a grant from the Bank of America Art Conservation Project. Generous support for this project is provided by Kim and Ginger Caldwell, Friends of Heritage Preservation, and Haag-Streit USA.