Judith beheading Holofernes is one of the most popular art historical subjects of all time. The biblical story began to appear in artwork during the Renaissance and continues to be reinterpreted to this day—most often as a means for modern artists to put their work in conversation with art history at large.

Judith, a young widow of Bethulia, took action to save her people who were under siege. She went to the enemy camp dressed in her best clothes and sought out the general Holofernes, who had openly desired her. She convinced him that she had and was willing to share information that would lead to his success but that she had to wait for a sign from God. While waiting for said sign, she plied him with food and drink. Once he was asleep, she took his sword and cut off his head.

While the story itself has never changed, the manner in which it is executed certainly has. Though many renderings of Judith depict her as a multi-dimensional person, others do lean on rather thin tropes of womanhood. From icon of virtue to seductive temptress, the range of referenced stereotypes is remarkably wide. 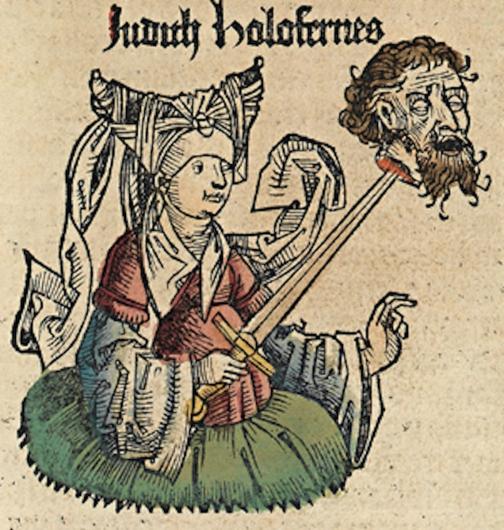 Unknown, Judith with the Head of Holofernes in the Nuremberg Chronicles, 1493. Woodcut.

Early Christian representations of Judith were neither sexualized nor did they display any apprehension at her deliberate use of violence to kill a man. Rather, she and Holofernes seem to have been imagined in the abstract—one as a saintly, almost virginal, soldier against evil; the other as spawn of the devil. This German woodcut print exemplifies the attitude well. Judith appears saintly and ethereal—she holds up two fingers and gazes serenely at the head on the end of her sword. 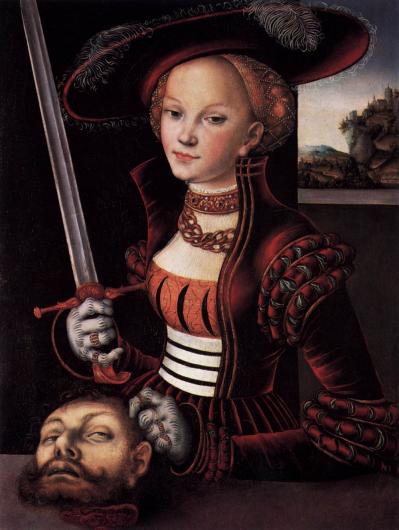 Lucas Cranach the Elder, Judith with the Head of Holofernes, 1530. Jagdschloss Grunewald, Berlin.

In the late Renaissance, a notable shift occurred in depictions of Judith. Previously imagined as chaste and pure, she began to be fashioned as sexual. Lucas Cranach the Elder’s Judiths—whose workshop created eight, if not more, paintings of the beheading—embody this shift in presentation exquisitely. Though still triumphant, Judith also seems a bit haughty. Divinely dressed, she would’ve certainly proved desirable to court members, who made up the majority of Cranach’s patrons.

Hans Baldung’s 1525 rendition of Judith with the Head of Holophernes clearly hones in on the seductive role Judith took to achieve her goal. She stands in a strange contrapposto, nude yet jewelry clad, with a small knife and the head of Holofernes in hand. Her hair cascades elegantly behind her, perfectly curled and clean. And yet, there seems to be a serene confidence about her. Despite everything, this sixteenth-century painting does depict a good, righteous woman with serious agency. 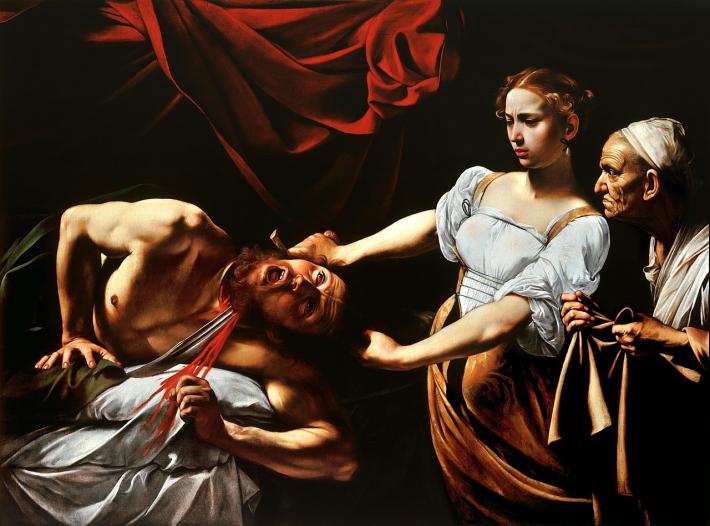 In the Baroque period, a new level of violence was inserted into depictions of Judith. Many artists began to feature Holofernes in the scene and even to show the actual moment of, or immediately after, the beheading. In true Baroque fashion, the story of Judith was used by this era of artists to evoke drama and grit. Interestingly, Carrivagio chose to depict Judith as pure yet detached. Clad in an unstained white dress and rendered dainty in figure, the scene feels almost illogical. 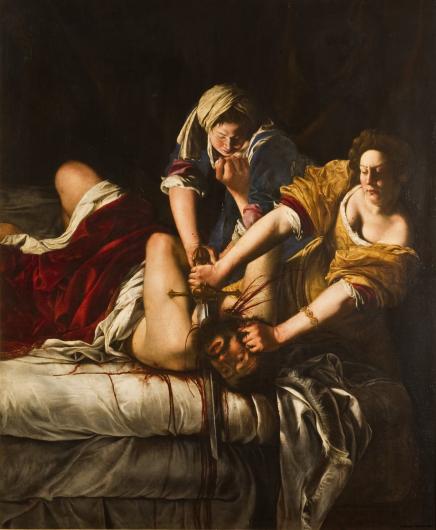 In many depictions of Judith beheading Holofernes, the artist attempts to insert some degree of separation between Judith and her violent actions. Artemisia Gentileschi’s Judith is quite the opposite. The only female artist in this series and a uniquely situated artist for the time, Gentileschi also chose to show the moment of killing. Though the composition and chiaroscuro speak to her admiration of Carrivagio, her Judith is far more Baroque and perhaps even more compelling. Certainly, this Judith is more engaged in the killing shown here than she has ever been previously. Rather than passively posing as a fixture of seduction or purity, Judith—muscles engaged—holds Holofernes down, wields a sword, ends his life, and saves her people. 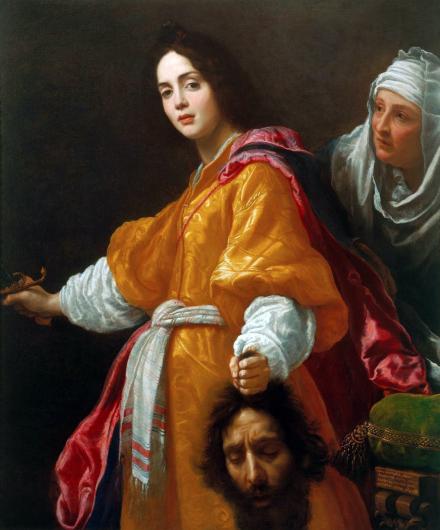 This is perhaps one of the most disturbing depictions of Judith with the Head of Holofernes. Cristofano Allori bizarrely chose to paint his former mistress as Judith, her mother as the maidservant to the right, and himself as the beheaded Holofernes. While it was not unheard of to paint specific contemporary women as Judith, this was primarily done as a testament to the woman’s goodness, often in spite of some real-life misconceptions. Allori’s choice to embed portraits into this biblical story seems spiteful. Much like Michelangelo’s decision to paint Biagio da Cesena, the papal master of ceremonies, as Minos in The Last Judgment fresco of the Sistine Chapel.