The Memento Mori in Renaissance Art 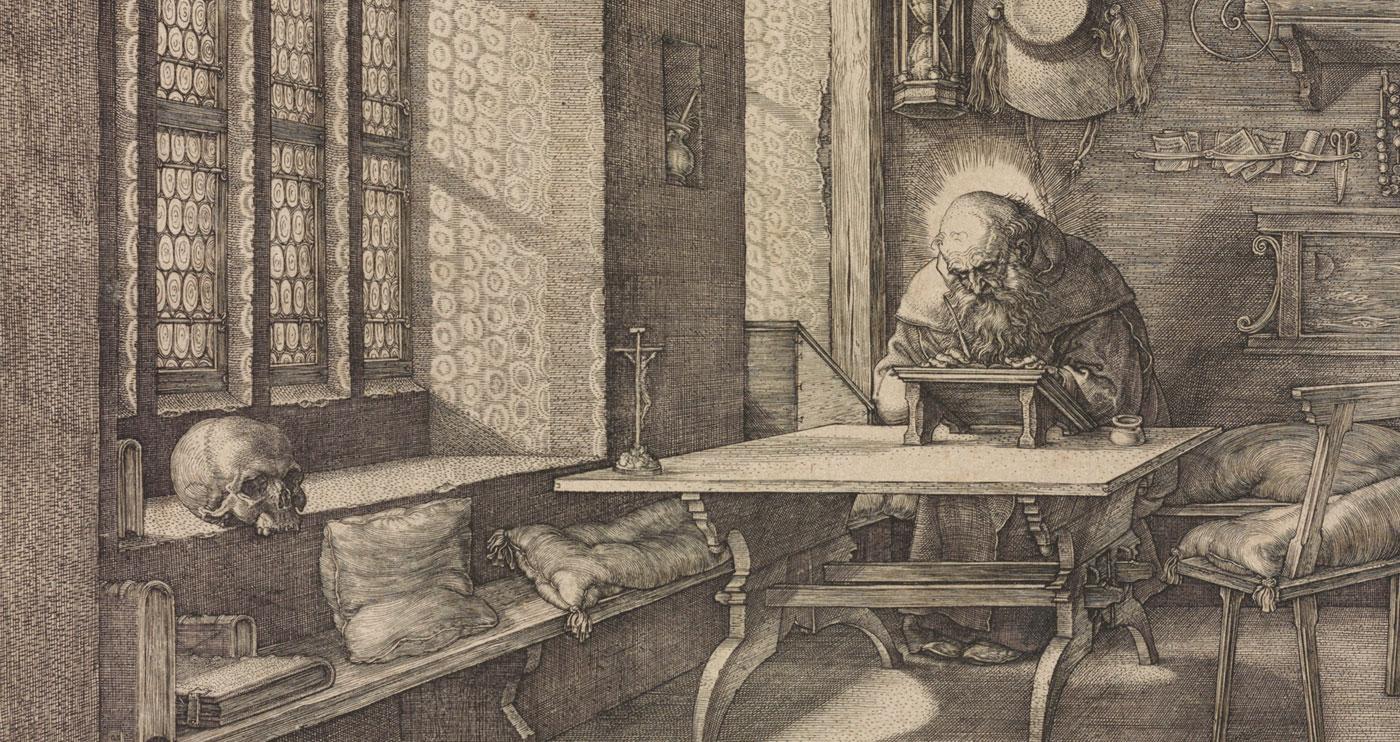 What role did the memento mori play in Renaissance Europe? 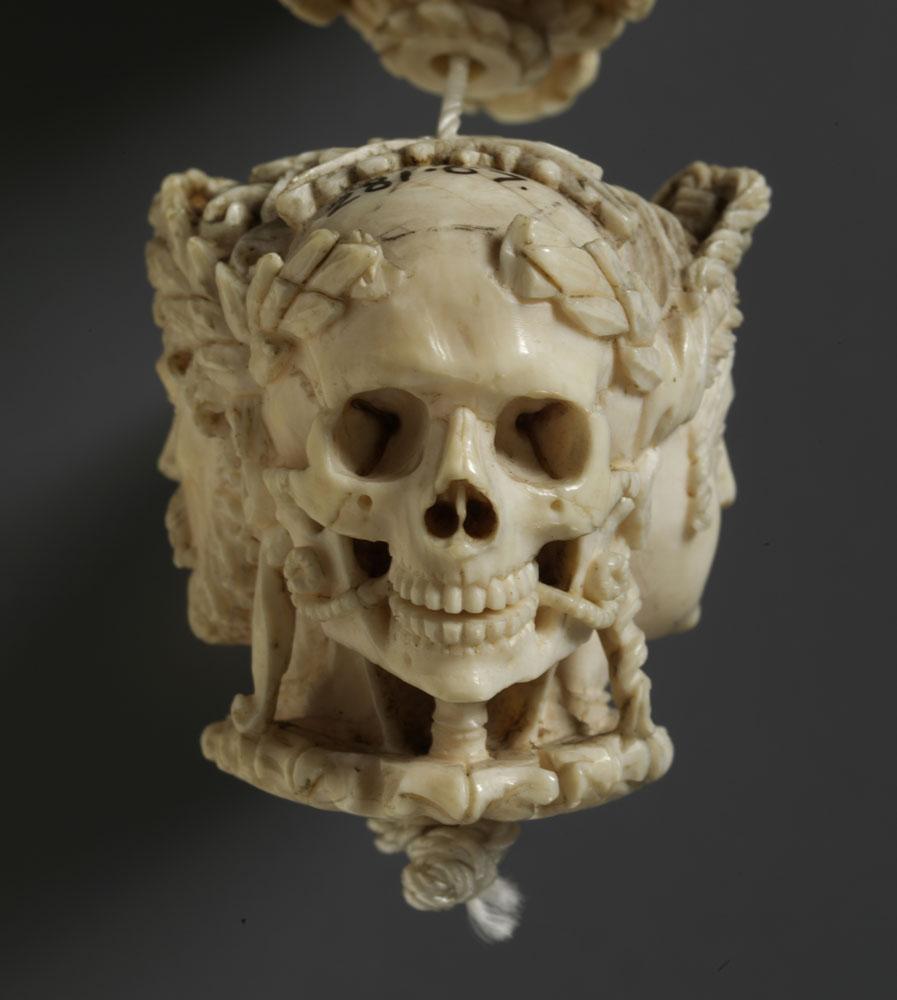 Finial of a chaplet, made of elephant ivory in France or southern Netherlands, ca. 1530 with mid-nineteenth-century insertion.

“This exhibition seeks to explain the appeal of artworks like these, pieces that seem to cut against our notion of the Renaissance as an optimistic age.”

In 1520, during a stopover in Cologne on his way to the Netherlands, the painter and printmaker Albrecht Dürer bought himself “a little ivory death’s head,” he reported in his journal. It was not a peculiar purchase for the time. The sixteenth century witnessed a proliferation and popularization of art illustrating macabre themes, which often took the form of skull-shaped ivory beads and miniature skeleton sculptures. As we came to learn in the Bowdoin College Museum of Art’s 2017 exhibition, The Ivory Mirror: The Art of Mortality in Renaissance Europe, these spine-chilling curiosities served a purpose.

“This exhibition seeks to explain the appeal of artworks like these, pieces that seem to cut against our notion of the Renaissance as an optimistic age. We categorize them in general terms as memento mori images, images meant to remind us of the inevitability of death,” said Bowdoin professor of art history and exhibition curator Stephen Perkinson during a keynote speech at the exhibition’s opening. Put more gently, these objects and images warned their owners to enjoy life and act honorably, because the Grim Reaper might appear on the doorstep at any moment.

The Ivory Mirror brought together seventy examples of memento mori from European and American collections, offering an unprecedented view of this easily misinterpreted genre. Anne Collins Goodyear, co-director of the museum, commented, “The research of curator Stephen Perkinson and his collaborators sheds new light on these fascinating objects, enabling us to better understand the complex origins and associations of memento mori imagery, the larger artistic and literary context of which they were a part, the nature of the workshops that designed them, and, ultimately, how these remarkable works of art continue to evoke the tension between pleasure and responsibility in a fashion just as compelling today as five centuries ago.” The research was indeed staggering, and this installation was exceptional in concept and scope.

Contrary to historical speculation, Perkinson said he doesn’t believe that memento mori imagery is a direct response to the Black Death pandemic of the fourteenth century, but loss of life by disease, childbirth, or mere accident was persistent and highly visible throughout the Middle Ages. Piety, one of the exhibition’s eight main themes, was no antidote to this, yet it clearly soothed hearts and minds to pray using devotional aides such as rosaries. Some of the carved ivory beads displayed were used in such a manner, as part of a larger chaplet or pendant. These pieces depict the head of a lively person or couple, that, when turned, delivers a ghastly surprise on the other side: the same face stripped of its skin, riddled with worms and other creepy-crawlies. If that sounds morbid, consider the crucifix that terminates a contemporary rosary—is a corpse nailed to a cross not comparably grim? 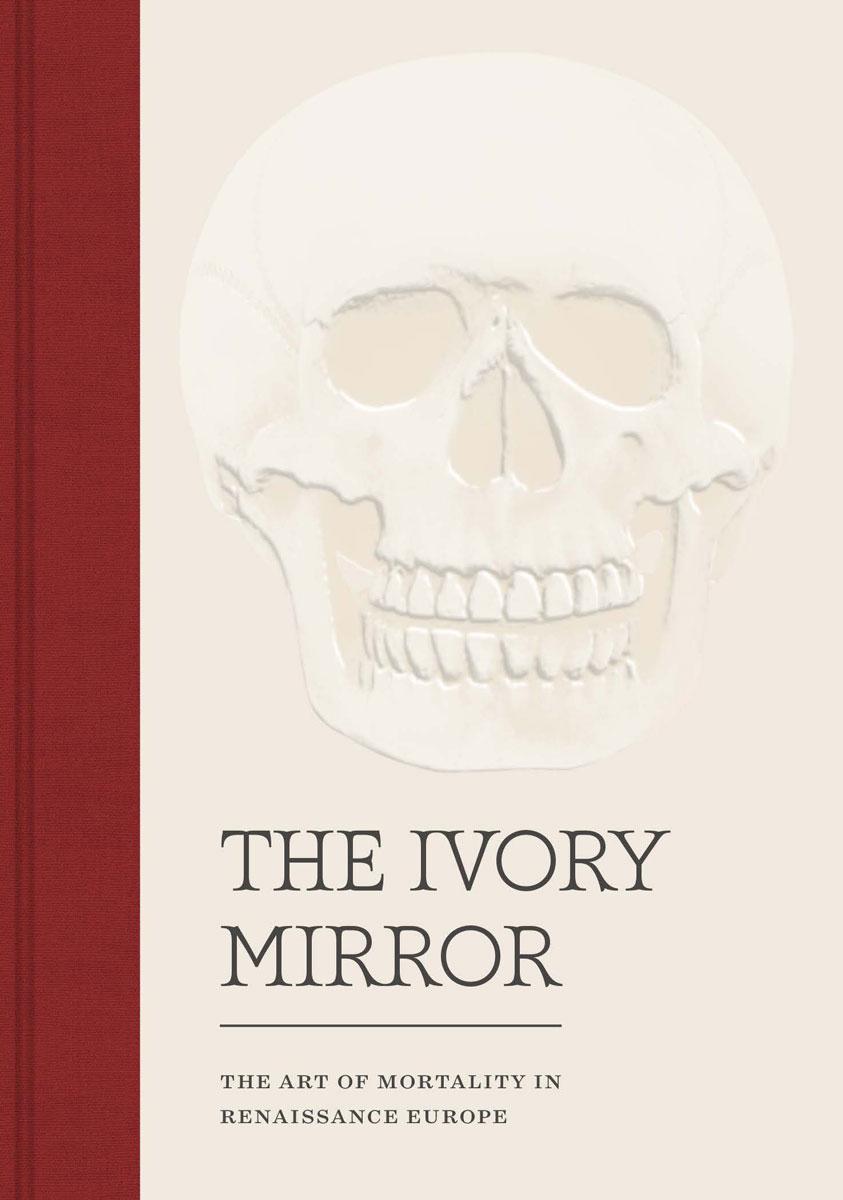 The lavishly illustrated catalogue published in association with the exhibition, The Ivory Mirror.

These little ivories, once luxury items, quickly became trendy, writes Perkinson in the exhibition’s accompanying hardcover catalogue, published by Yale University Press. And different forms began to appear, less tied to the functional aspect of prompting prayer. The “little ivory death’s head” that Dürer picked up in Cologne, for example, was likely a freestanding sculpture, “something like an ‘artwork’ in the modern sense.” It is the type of object that one finds in a kunstkammer, or cabinet of curiosities, so beloved by sixteenth- and seventeenth-century collectors. 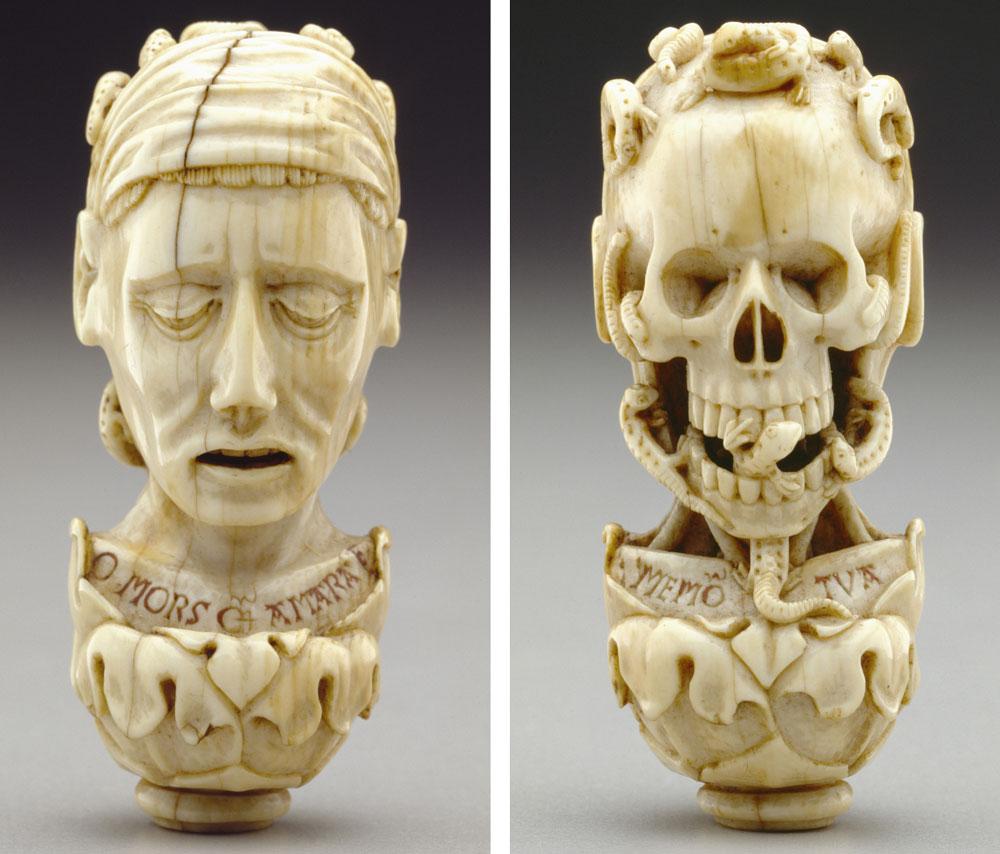 Incidentally, Dürer had previously incorporated memento mori imagery into his prints and paintings. His “Coat of Arms with a Skull” engraving dates from 1503. His 1514 print of St. Jerome in his study pictured a skull on the windowsill, “proof of the saint’s awareness that his writing was not for earthly amusement but rather for spiritual improvement,” writes Perkinson. By 1521, the year after his acquisition of the ivory knick-knack, he painted a portrait of Jerome; this time, the saint interacts with the skull by pressing his finger to its temple, suggesting “intellectual contemplation and self-criticism.” Dürer’s fellow artists, Lucas van Leyden, Joos van Cleve, and Marinus van Reymerswaele, emulated this iconography in their work, as memento mori imagery began to convey abstract subtexts.

One of the highpoints of the exhibition catalogue—aside from its 190 color illustrations, of which 61 are stunning full-page plates—is the chapter on Parisian carver Chicart Bailly (d. 1533). Presenting some outstanding archival footwork, art historian Katherine Baker shares her deep dive into Bailly’s estate inventory, uncovering an extensive ivory workshop where beads, rosaries, and related objects were made. She identifies heretofore unattributed pieces to Bailly and pinpoints book illustrations from which he and his carvers took inspiration. 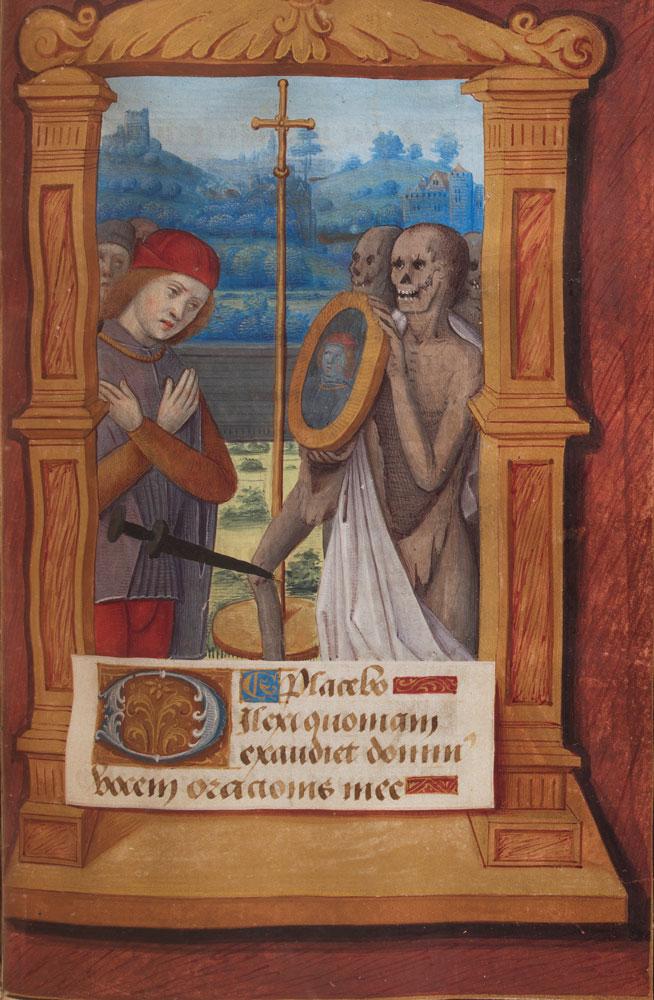 Manuscript book of hours from an unknown artist (northern France), depicting the Office of the Dead; use of Rome, fol. 105, beginning of the sixteenth century, manuscript illumination on parchment.

Speaking of illustrations, illuminated manuscripts figured in the exhibition as well. Colorful representations of death—e.g., demons armed with scythes and arrows—frequently appear in books of hours from the late fifteenth century onward. Books of hours were crafted for the purpose of encouraging laypeople to pray several times a day, both for themselves and for those who had passed (the “Office of the Dead”). “The late medieval book was the site of some of the most inventive memento mori images ever created,” writes Elizabeth Morrison, senior curator of manuscripts at the J. Paul Getty Museum, in the exhibition catalogue. Much like the multi-headed ivory prayer beads that, when turned, display a grisly sight, some manuscript illustrations render hellish visions. “[T]he calculated intent of these beautifully crafted and painted images was, in effect, to be horrifying, to jar the viewer into an immediate and subjective connection to death itself.” Call it tough love.

As a form, memento mori never quite expired—think mourning jewelry, post-mortem photography, or the art of Damien Hirst. We still memorialize the dead and attempt to “picture” the afterlife, and we are seemingly in the midst of a revival in how we contemplate mortality. There are two other books from 2017 on related topics: Death: A Graveside Companion, edited by Morbid Anatomy founder Joanna Ebenstein and featuring nine hundred illustrations, and Caitlin Doughty’s From Here to Eternity: Traveling the World to Find the Good Death. Bowdoin’s exhibition, and its associated events spoke to that renewed interest in the great beyond and significantly added to our understanding of its historical antecedents.