The Art of Autumn in Nine Works

As the leaves begin to drop, nature gives us a final vibrant show before the darkness of winter. The colors and rituals of fall have long inspired artists from around the world, and given them the opportunity to reflect on the passage of time and the bounties of our daily lives. Here we look at nine examples of beautiful autumnal imagery. 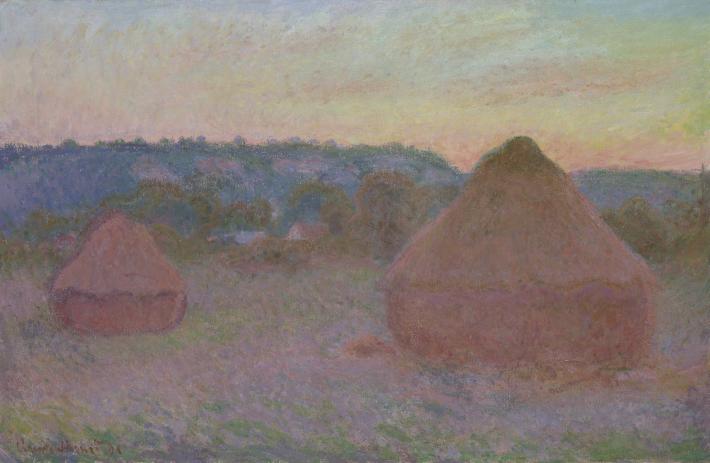 One of the first signs of fall is the subtle changing of the light as our days grows shorter. The Impressionists were fascinated by the way light changed our visual environment, documenting the shifts across the days and seasons. Claude Monet painted twenty-five canvasses in his Haystacks series, showing the changing of the seasons near his home in Giverny. 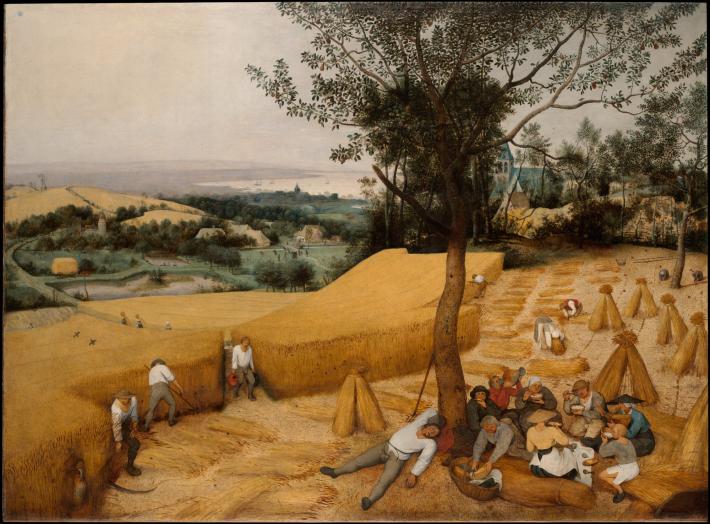 Pieter Bruegel the Elder, The Harvesters, 1565.

Haystacks are of course the monuments left by the labors of the fall, shown here in Peter Bruegel the Elder’s The Harvesters. Pooling labor to reap the rewards of a bountiful summer season has traditionally been a rite of passage in the fall months. 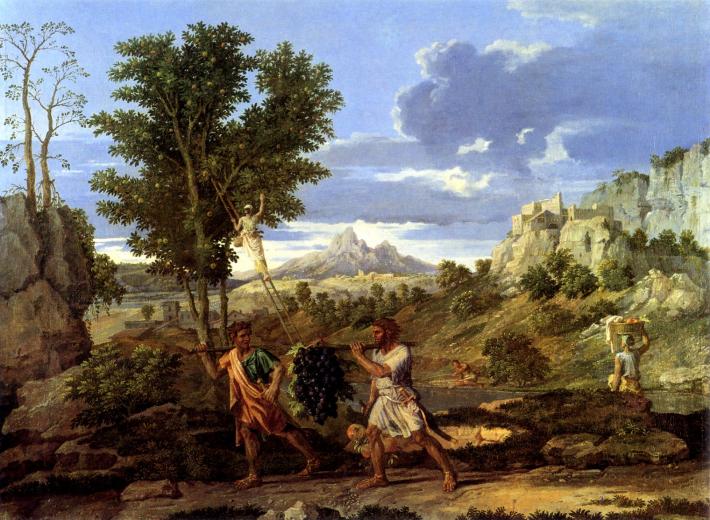 Nicolas Poussin’s series depicting the seasons show just how far back these practices go. Painted for the Duc de Richelieu, the series shows scenes from the Old Testament, including a fall harvest. Painted while he was in failing health, The Four Seasons served as an allegory for the seasons of life, as Poussin reflected on the order of the natural world. 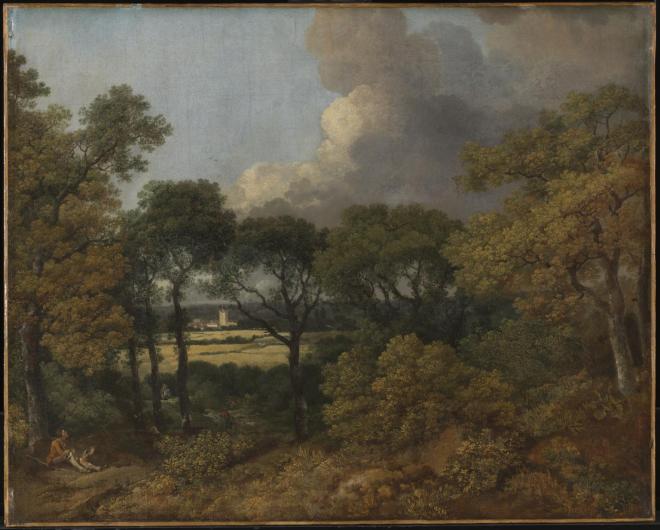 What would fall be without the changing color of the leaves? In this Thomas Gainsborough painting, a man rests, taking in the fall colors. Though a popular portrait painter for the British elite, Gainsborough loved painting landscapes, often encorporating them into his portraits. 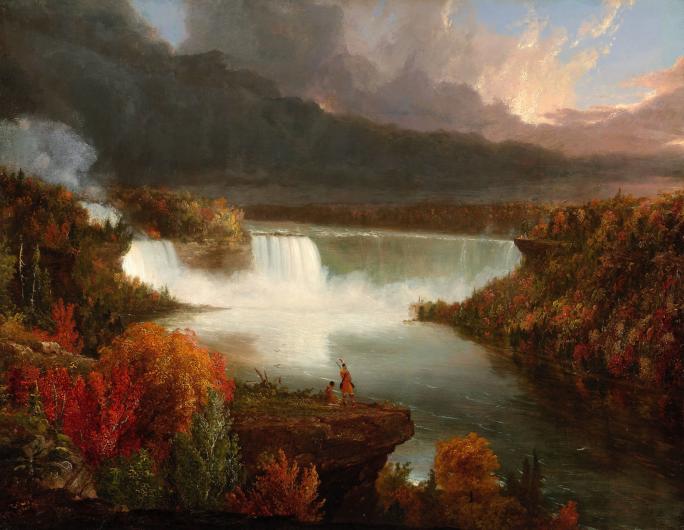 The beauty of nature in the fall is a subject matter well-suited for the dramatic compositions of the Hudson River School. Its founder, Thomas Cole, an emigre from England, here captures the majesty of a still largely wild nineteenth-century America, including two tiny figures in Indigenous garb taking in the scene. 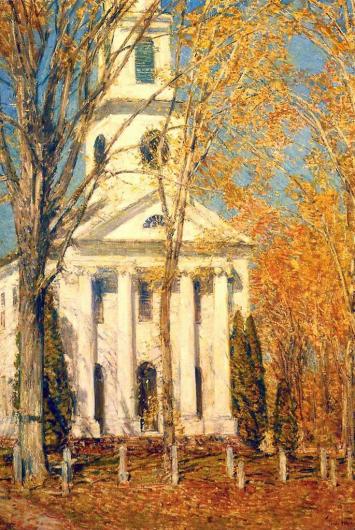 Decidedly less dramatic but no less beautiful, the American Impressionist Childe Hassam shows a church shrouded in the glory of fall leaves. Hassam stayed at an artists’ colony in Old Lyme, where he influenced an entire community of artists by bringing them the bright colors and loose brushstrokes of Impressionism. 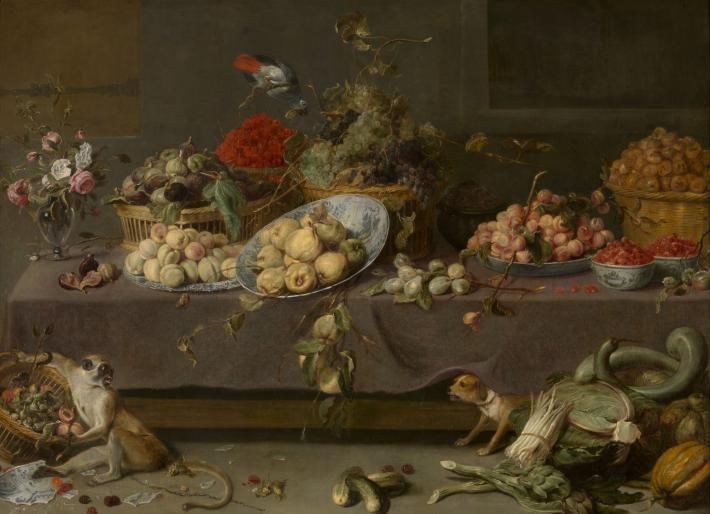 The brilliant colors of fall are also found on our bountiful holiday tables. The Flemish artist Frans Snyders painted many market scenes and vanitas still lifes, showing the opulence of the fall harvest and the wealth of the Dutch merchants of his era. He often included monkeys in these scenes, symbolic of trouble-making sinners, and who here may remind us of the gluttony we associate with holiday feasts. 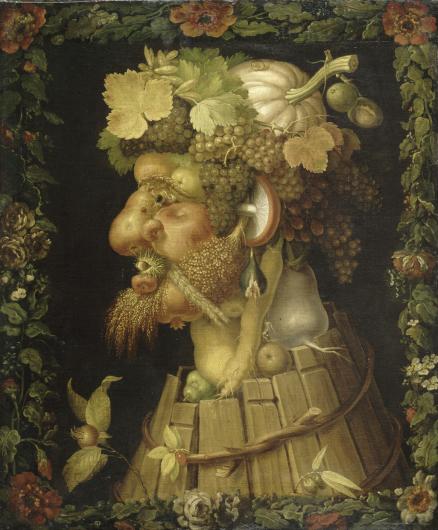 Giuseppe Arcimboldo has taken the fall cornucopia and literally turned it on its head. His portraits constructed entirely of fruits and vegetables, which he is best known for, were meant to amuse his patrons. Autumn, from his Four Seasons series, includes items typical of the fall harvest, like pumpkins, tubers, wheat, and grapes. 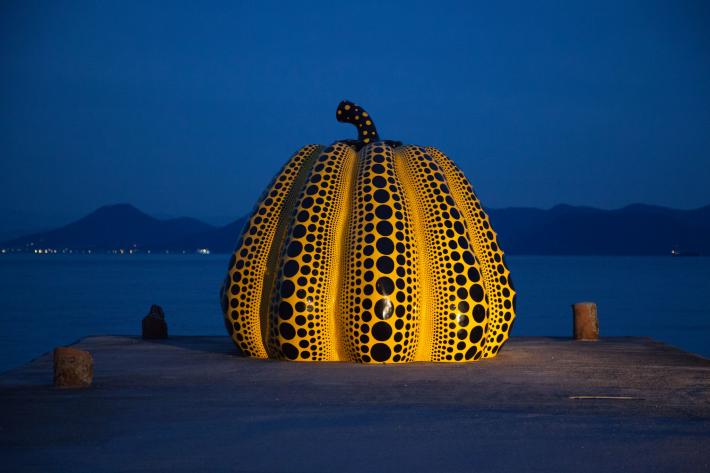 Fall decor, like a tabletop arrangement of gourds, is also a marker of the season. Yayoi Kusama has used pumpkins into her art since she was a child, and they show up in her works in a number of ways, from her mirrored Infinity Rooms filled with them, to shelves stacked with smaller versions, to this massive sculpture in her native Japan, which would make an enviable yard decoration.