A Persian Fantasy
on the Hudson 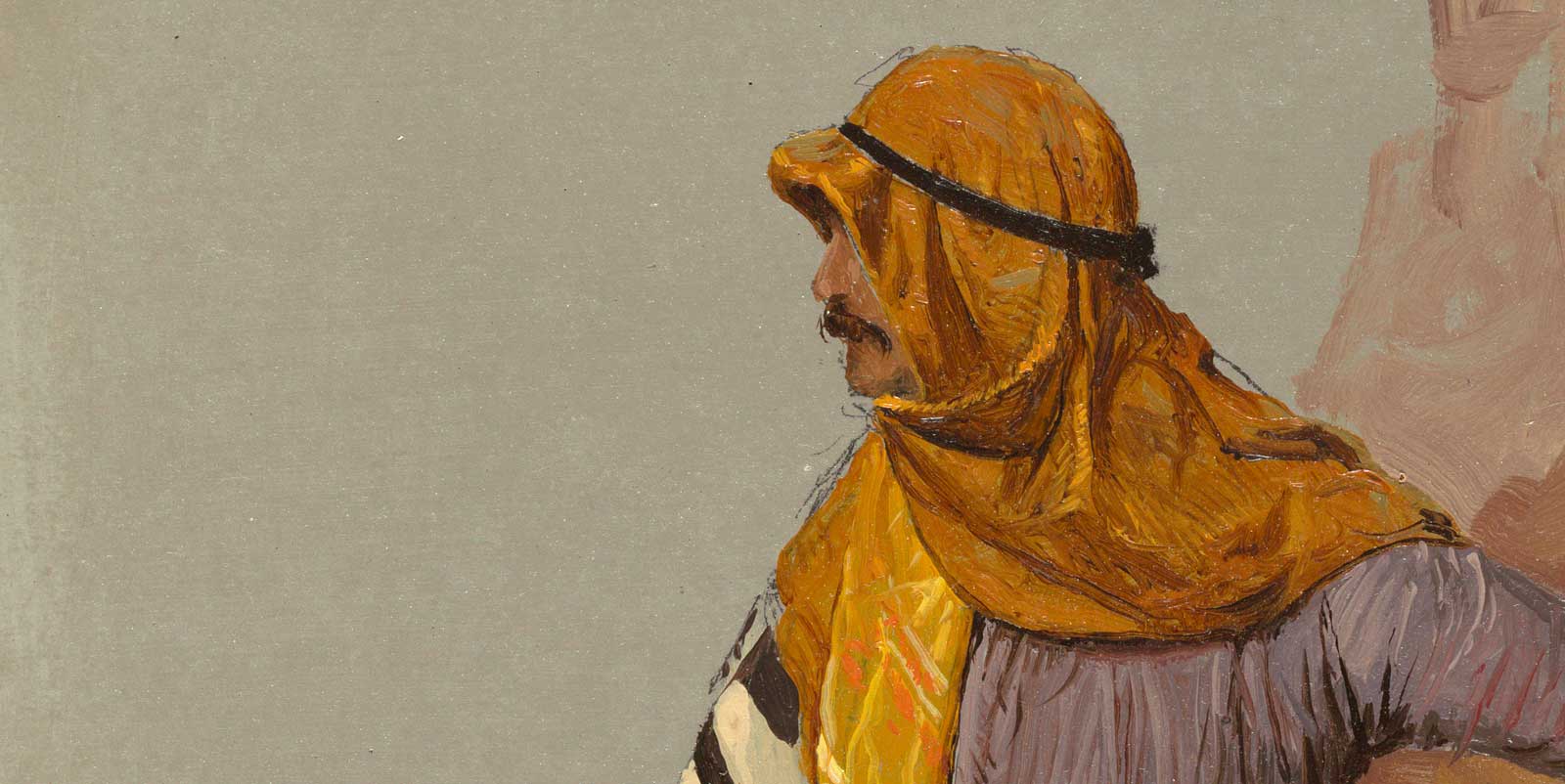 At Frederic Church’s Olana estate, for the first time in a new exhibition, the artist’s paintings and the historic costume collection that inspired them are reunited. 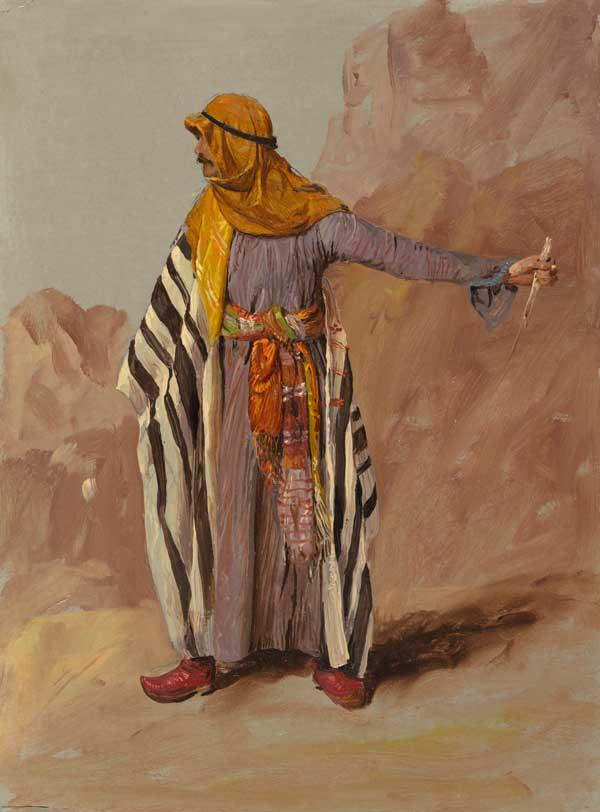 “If you look more closely at the finished oil sketches that he did, unlike as was previously thought, they were not done onsite in the Middle East, they were done by his friend modeling for him in the studio and being dressed up by Church in a way that intentionally moves away from the authenticity of the costumes.“

Petra had only recently been brought to Western attention by Swiss traveler Johann Ludwig Burckhardt when American artist Frederic Church made it a stop on his 18-month Middle East journey. When he returned to New York, he lushly depicted the approach to its Al-Khazneh temple — carved into a rosy sandstone cliff — from the darkness of the Siq gorge. He wrote in his diary that the ancient ruin was “shining as if by its own internal light.” Just visible in the gorge’s shadows are two Bedouin figures holding long rifles. The painting — El Khasné, Petra (1874) — has the feeling of a snapshot, but Church romanticized his memory of the site, including the Bedouins’ clothing. Although he got complete outfits as souvenirs, Churched mixed and matched pieces for his studio models to reflect his impression of the place.

“If you look more closely at the finished oil sketches that he did, unlike as was previously thought, they were not done onsite in the Middle East, they were done by his friend modeling for him in the studio and being dressed up by Church in a way that intentionally moves away from the authenticity of the costumes,” said Sean Sawyer, president of the Olana Partnership. “He knew what it should look like, but it wasn’t fulfilling the aesthetic needs that he had, so he decided to use a woman’s headscarf as a sash.” His Middle East paintings are “a place of fantasy.”

For the first time, the Middle Eastern clothes Church acquired are on public view in Costume & Custom: Middle Eastern Threads at Olana, on view through November 25 at the Olana State Historic Site in Hudson, New York. Olana is the Persian-style 1872 home that is a distillation of all that Church loved about Middle Eastern architecture. Islamic-inspired stencils adorn the walls; the shapes of windows and doors overlooking the Hudson River suggest mosque entrances. The sitting room where El Khasné, Petra hangs was based on the painting’s luminous hues.

Church was the star of the second generation of Hudson River School painters, a movement of 19th-century American artists who portrayed Hudson River Valley landscapes with a sublime Romanticism. His meteoric rise came early, with two of his most celebrated works — Niagara (1857) and The Heart of the Andes (1859) — painted before he was 33. However his fame was waning when in November 1867, he set out to Europe and then the Middle East with his wife Isabel, one-year-old son Frederic Joseph, and mother-in-law Emma Carnes. Through 1868, he would travel to Alexandria, Beirut, Damascus, Jerusalem, and other sites, seeking out evocative ruins of civilization and biblical locales.

He’d undertaken previous journeys for his art — such as the 1850s expeditions to South America to follow in the footsteps of explorer Alexander von Humboldt — still the desert travel on camels and donkeys to remote ruins promised to be arduous. Yet he and his wife were ready for a change. They had lost two children in 1865 to diphtheria, and Church’s younger sister Charlotte Eliza had died in January 1867. Travel could give new vigor to his art, and provide distraction from their heavy losses.

Like most travelers, the Churches picked up mementos, with an eye for the unconventional. (Including a few live donkeys shipped back to their New York estate.) For Costume & Custom, their textile souvenirs were extensively researched for provenance, from the elegant 19th-century Syrian coat embroidered with metallic thread, to the striking early to mid-1800s woman's thawb, its flowing form woven with cotton, silk, and wool in Bethlehem.

“We discovered he was collecting things on the journey that were not your typical tourist purchases,” Sawyer explained. Rather than buy showy regalia, he acquired objects of daily wear, like a Bedouin man's qameez and an Ottoman Empire silk keffiyeh (head scarf). Sawyer noted that this new research revealed that Olana holds “one of the oldest collections of everyday clothing from Palestine that survives. He was essentially buying vintage when we was traveling.” 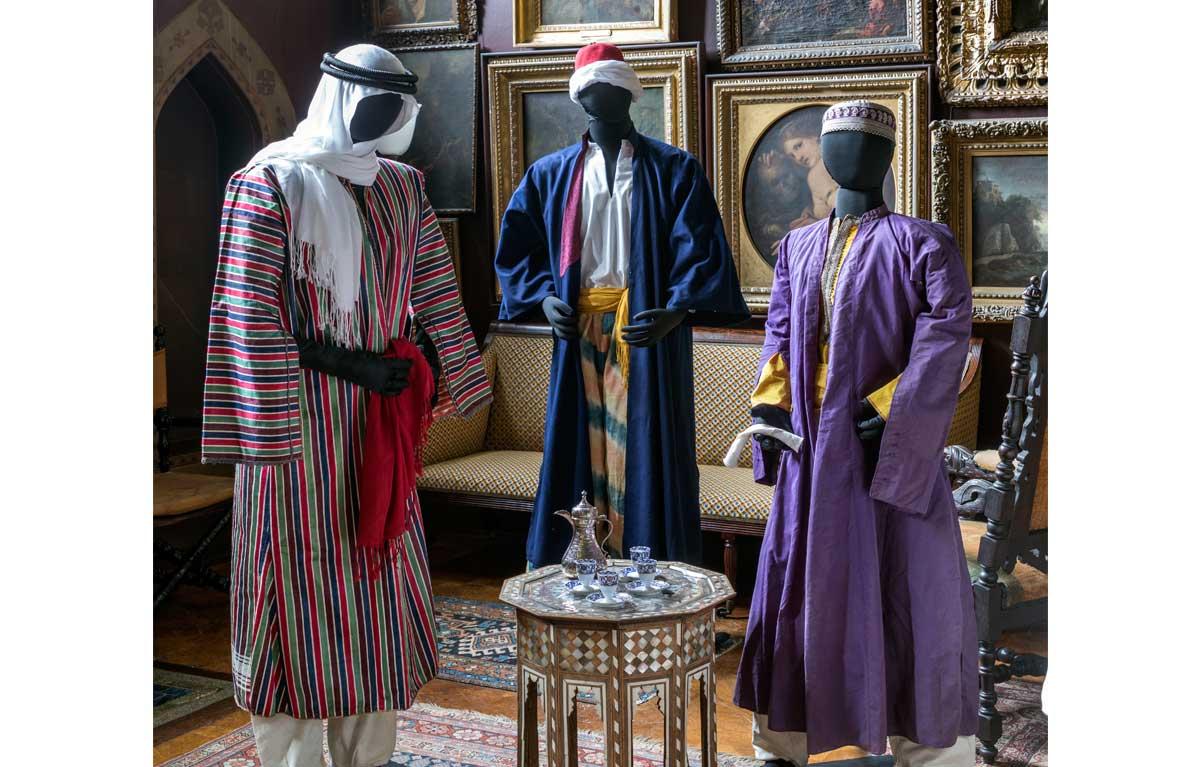 Mid-19th century clothing from the Olana collection on mannequins in the Dining Room at Olana. 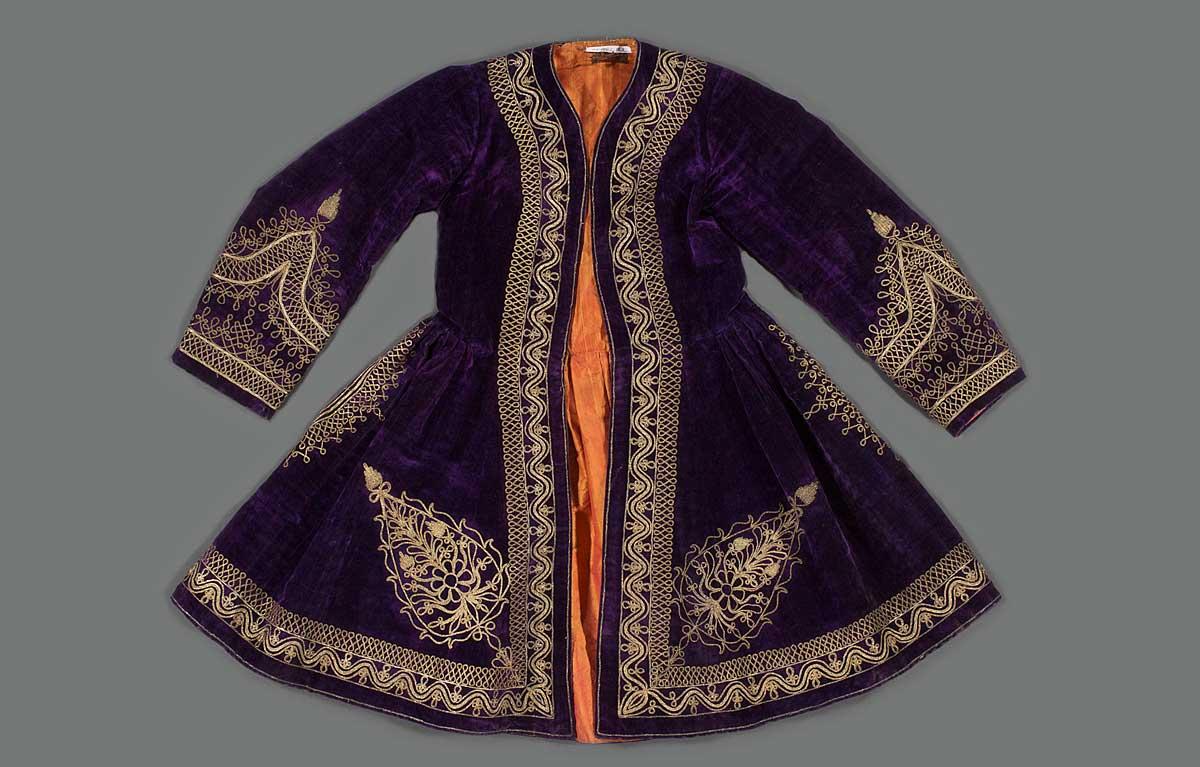 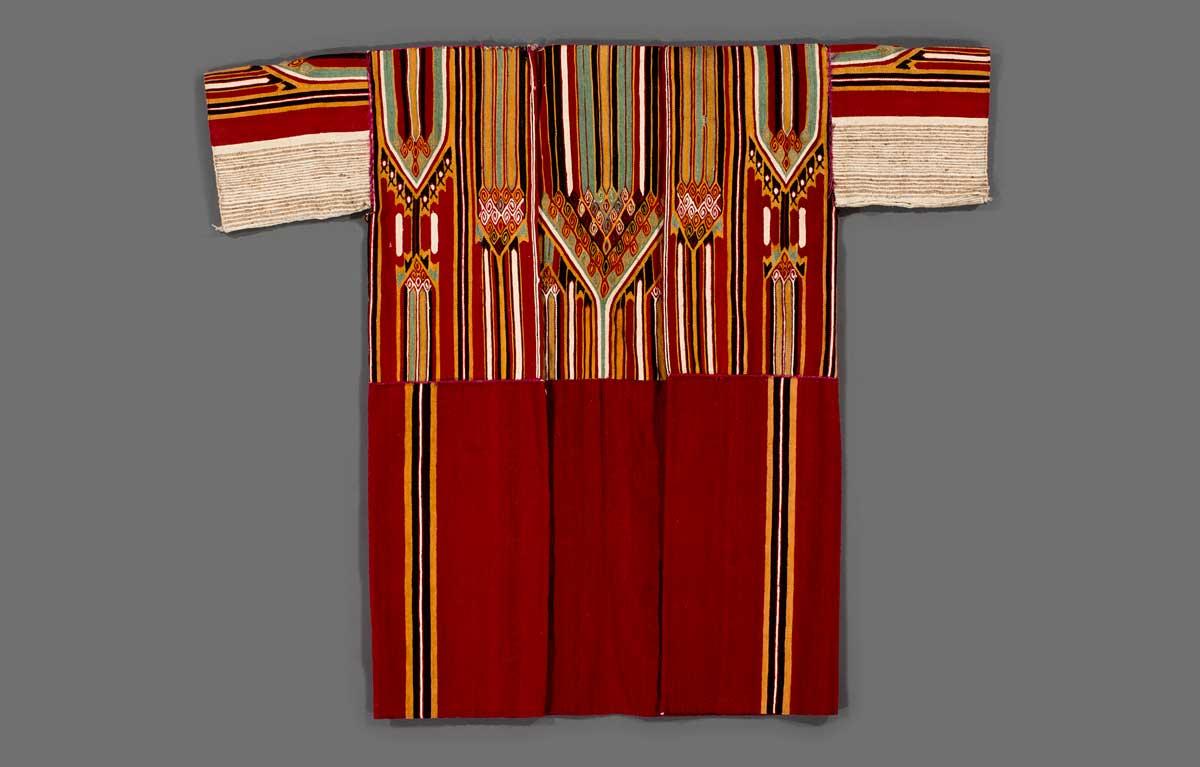 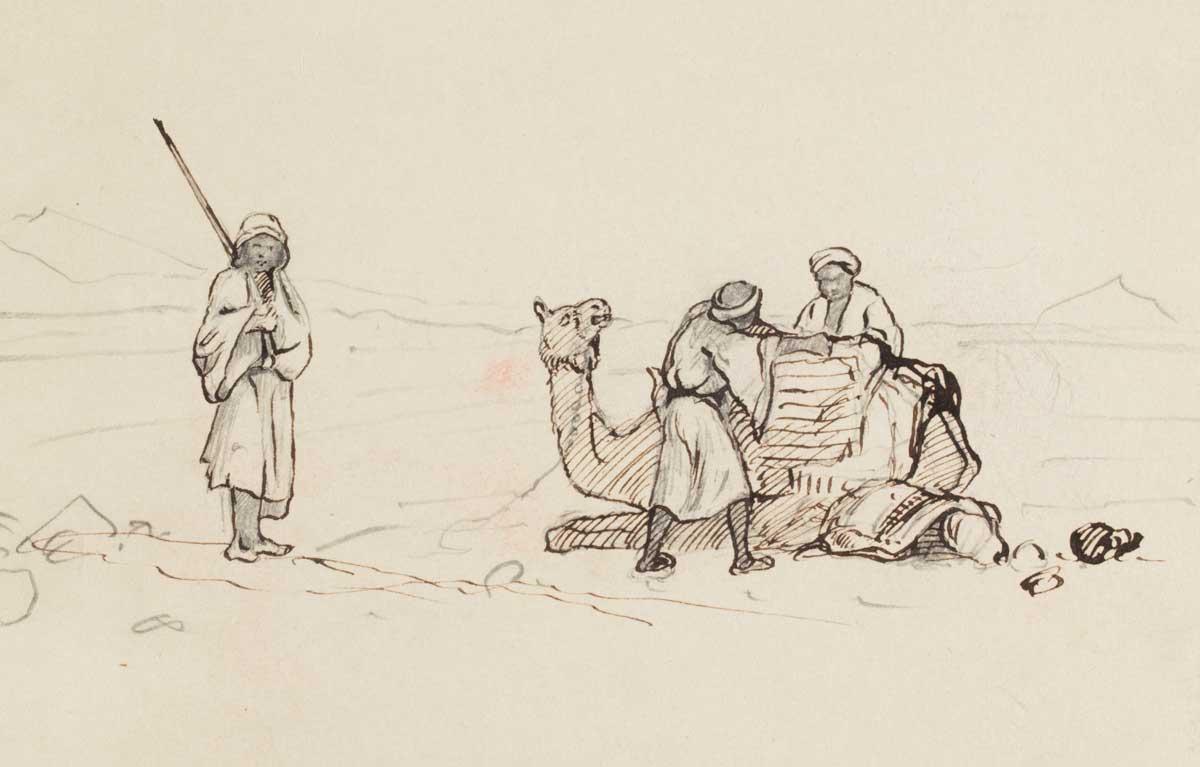 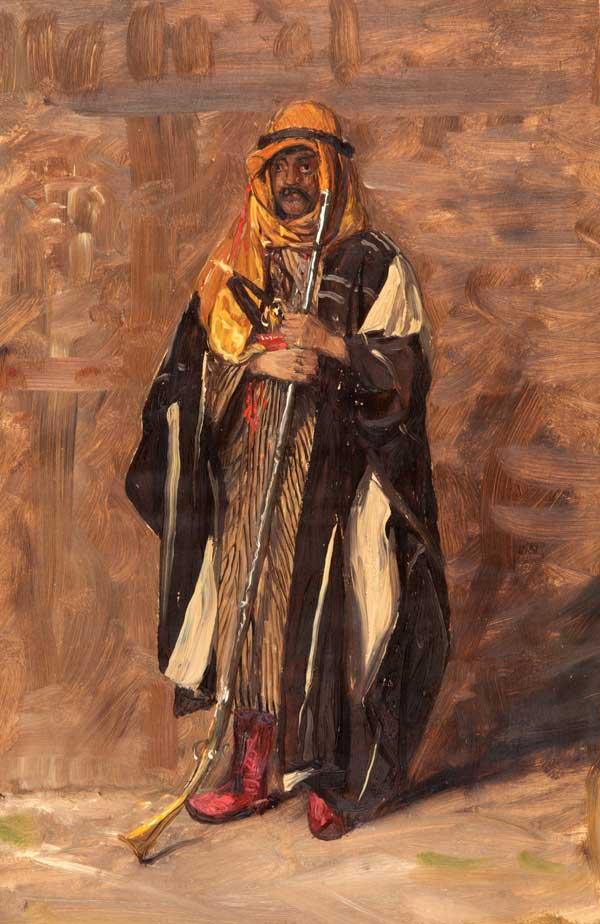 Church took an avid interest in local inhabitants, a subject he rarely featured in earlier paintings. “He did pencils sketches of people on the street in Bethlehem, labeling pieces of their clothing,” Sawyer stated. Costume & Custom includes an 1868 graphite study of an "Effendi Gentleman" with each of his outfit's components neatly labeled, as well as a brush and ink piece from February of that year showing a man and a camel with their accessories rendered in meticulous detail.

In Olana, this art is installed alongside mannequins dressed in the historic costumes. Two plush Dragoman — or guide — suits great visitors at the court hall landing, their sumptuous wool, cotton, and silk from Egypt and the Ottoman Empire harmonizing with the Persian-style interior. A mannequin in a striped Bedouin man's aba is posed in the studio, as if waiting to be painted into the Petra scene. And in the dining room, a whole assembly of mannequins are in colorful garb to recall a theme party in which guests dressed “à la Turk.” The costumes were a part of life at Olana, albeit a very Orientalist interpretation. And while Church played with the gender and origin of pieces to fit his desires, for Costume & Custom Olana worked with fashion consultants to reassemble the original designs.

To give the garments the context that was lacking in Church’s reinterpretations, the Olana Partnership is collaborating with the Institute of Arab and Islamic Art on a series of exhibition tours led by contemporary artists of Arab and Islamic heritage. The walkthroughs highlight questions of cultural identity in relation to clothing. “Contemporary artists of Arab and Islamic descent interpret Frederic Church’s Orientalist fantasy to create a visceral and intellectual response, and in turn we educate for growth and change in our visitors,” said Amy Hufnagel, the Olana Partnership’s director of education.

From 1868 until his death in 1900, Church completed more than 25 paintings that were inspired by his Middle East travels, from the colossal Jerusalem from the Mount of Olives (1870) in which three figures gaze at the sacred city illuminated by a break in the clouds, to Syria by the Sea (1873), with a golden glow falling over the ruins. Yet his masterpiece was Olana itself, and now in Costume & Custom, the material influence on this immersive work of architecture and art is revealed.