The History and Iconography of St. George and the Dragon 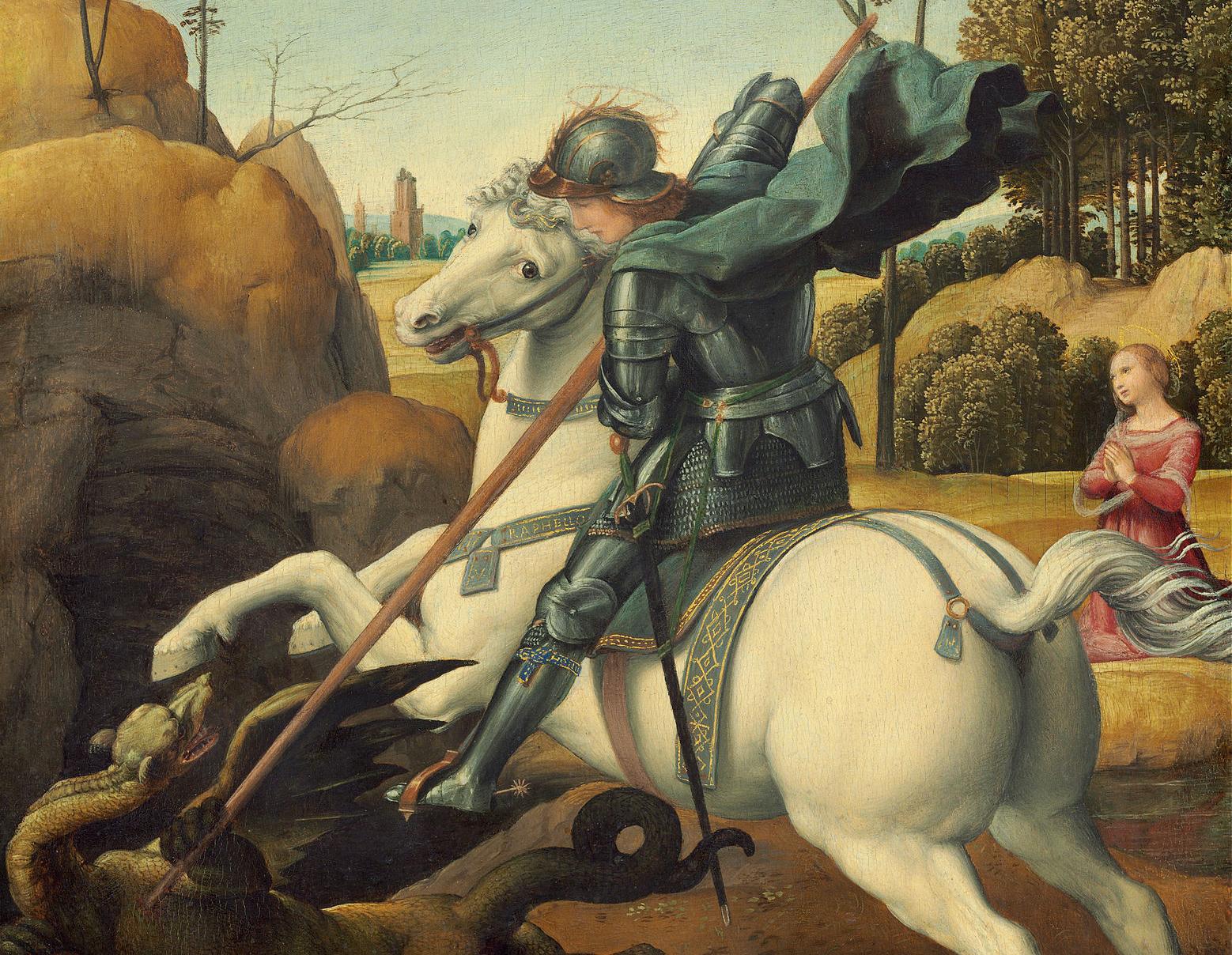 The old notion of “slaying the dragon” has had a pervasive presence in our culture for centuries, yet few know the actual origins of the popular expression. One story that certainly increased the phrase's popularity is that of Saint George, an early Christian martyr that served in the Roman army during the fourth century.

A symbol of Christian chivalry and selflessness, the saint’s influence has left a lasting impression on Western culture. Responsible for the common fantasy trope of the knight slaying the dragon, his legend inspired more modern stories like Lord of the Rings, Shrek, and countless other creations from Shakespeare monologues to arcade games. Several countries and principalities like England, Georgia, and Portugal have adopted him as their patron saint, insisting that his likeness represents the values of their respective nations.

St. George’s prominence certainly peaked during the Middle Ages, and he is frequently shown wearing knights' armor from the era, emblazoned with his characteristic cross. A large amount of this period’s extant artwork and faithful restorations continues to reside in the imposing Gothic cathedrals of the High and Late Middle Ages.

Stained glass windows are particularly characteristic of Gothic architecture and used to portray various scenes from scripture and the lives of important saints for the largely illiterate congregation. Though many have broken or otherwise necessitated replacement over the centuries, stained glass windows in cathedrals and churches across Europe came to feature the classic image of St. George thrusting his spear through the dragon. 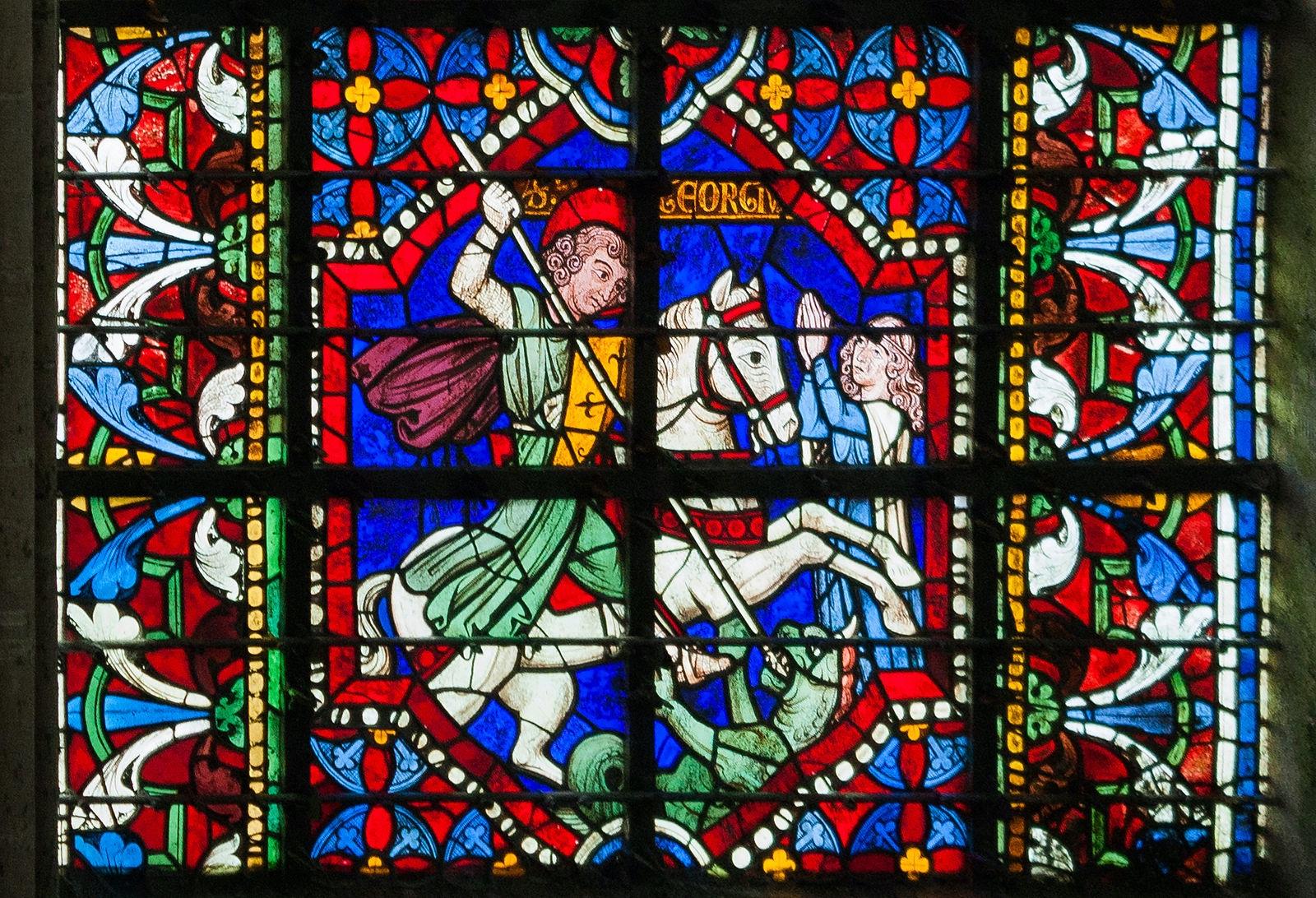 This first panel (of seven, counting from bottom to top) of the central window in the 217th bay of Cathédrale Notre-Dame de Paris depicts St. George slaying the dragon. This window was remade in 1918 under the direction of architect Gabriel Malençon.

Despite what one might expect, early veneration of St. George had nothing to do with the dragon-slaying legend. Although the exact details are hazy, during Emperor Diocletian’s last Great Christian Persecution, St. George refused to denounce his Christian faith and was punished as a result. Diocletian was said to have tempted St. George with promises of wealth if he converted—or, in another version, tortured him for years. Yet, his refusal to renounce his faith-inspired the conversion of others to Christianity.

George’s escapades as a dragon slayer wouldn’t be introduced until almost a millennium later, when his status as one of the Fourteen Holy Helpers and a prominent military saint would usher in a revival of his influence during the eleventh-century crusades. The story of St. George and the Dragon would materialize during this period, and the myth would pass into folklore across the Christian world. 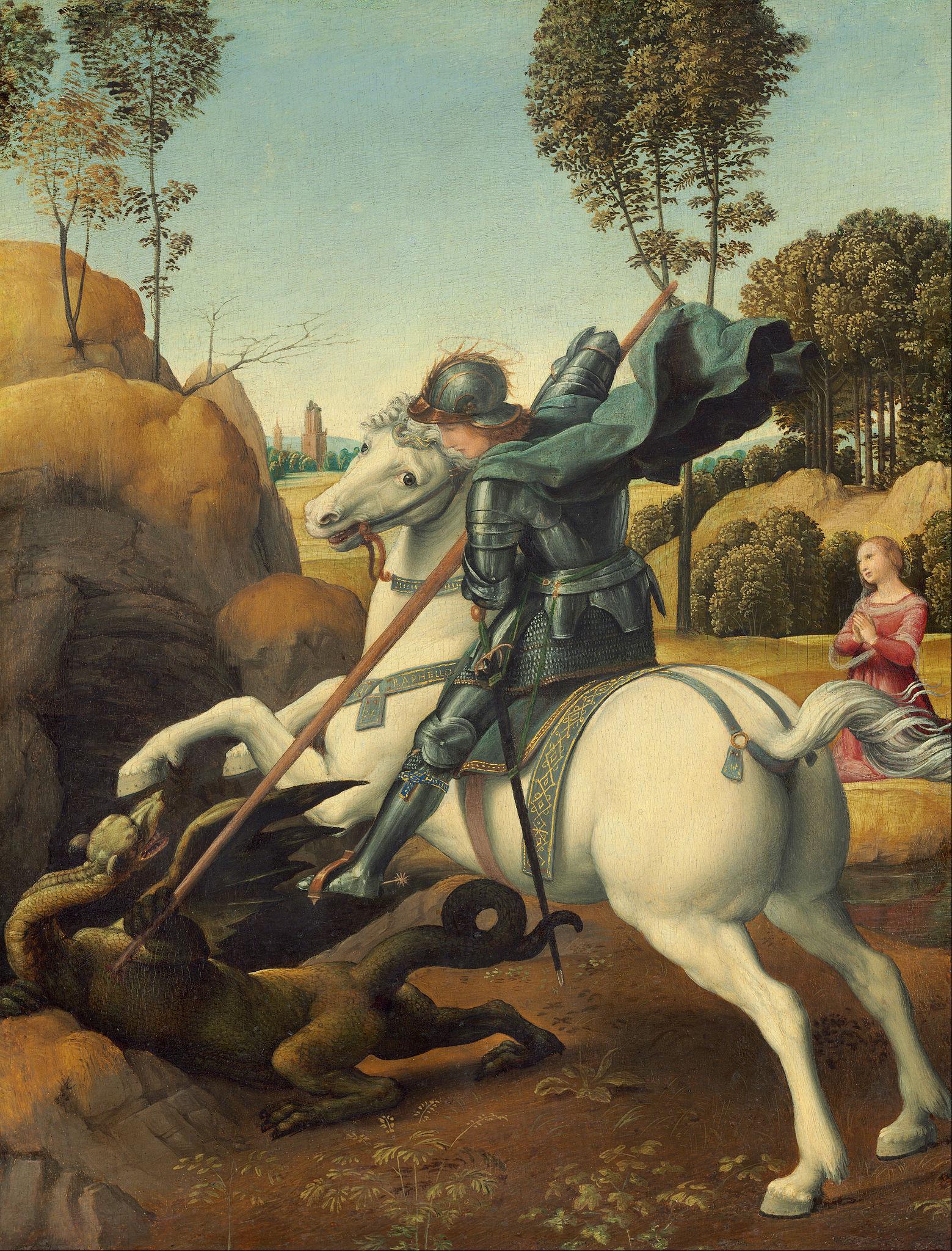 The legend goes that a dragon was terrorizing the city of Silene (in modern-day Libya), demanding sacrifices of sheep to keep the monster satisfied. Soon the town ran out of sheep to give and began to instead resort to offering human sacrifices to keep the dragon content. When the King’s daughter was chosen as a sacrifice, St. George happened to be passing through. He offered to slay the dragon and, upon confronting the monster, he thrust his lance through a weak point in its scaly armor.

Before this legend would influence modern pop culture, however, artists over the centuries have painted their own depictions of the famous myth. This includes some of the most influential artists, such as the Renaissance icon Raphael.

Most of these paintings followed a very similar template. For example, St. George’s foe was generally rather small, at least compared to the gargantuan dragons we are familiar with today, and serpent-like—in reference to Satan's snake form, most famously associated with the Garden of Eden. The Saint is frequently shown towering above the monster on a white steed, to signify the triumph of good over evil, and the princess is often pictured in the background. This detail would certainly influence the relevance of the “damsel in distress” in later renditions of the legend. It was also common for George to be drawn with a halo or nimbus to signify his sainthood. 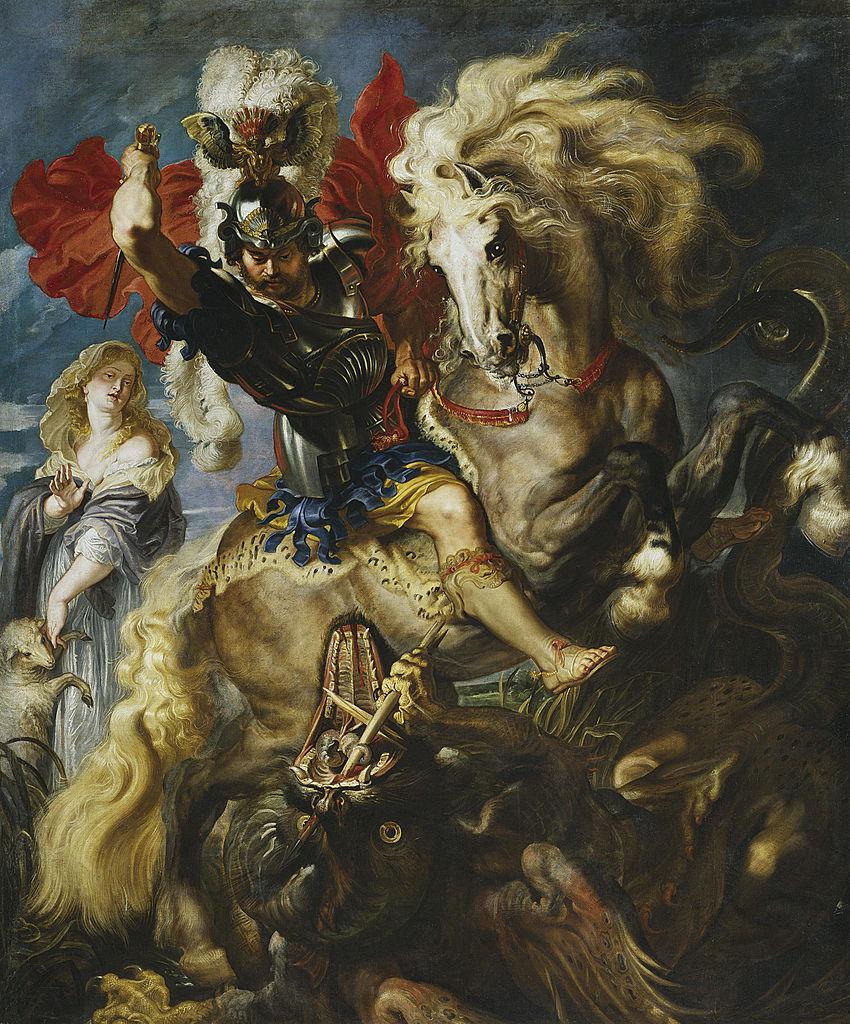 These paintings also reflected the trends of the broader art periods they were created in. In Peter Paul Rubens St. George Fighting the Dragon, there is a noticeably darker color scheme and flair for the dramatic that was characteristic of the Baroque period. In Gustave Moreau’s St. George and the Dragon, brighter colors and a hazy backdrop of a beautiful castle on a mountaintop emphasize the beauty of nature. 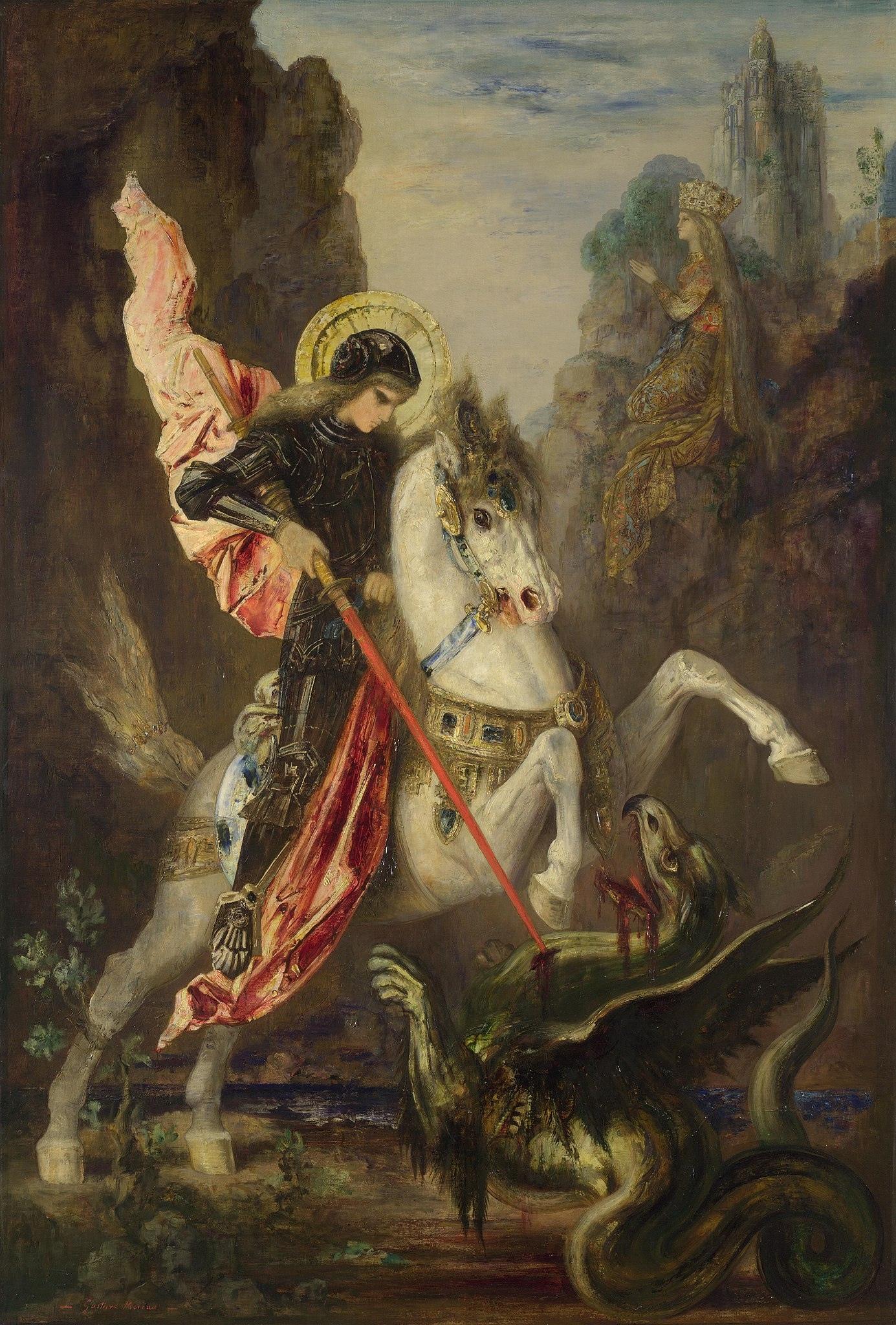 This classic image has been recreated countless times through the centuries and across all of the major art periods following the eleventh century, each with small details that would add a more contemporary twist on the iconic myth. St. George’s incredible legacy has inspired generations of artists, Christians, and patriots alike for centuries, and will continue to serve as a symbol of fearless benevolence in the future.