Hieronymus Bosch (1450-1516) is one of art history’s most mysterious and fascinating artists. His work was popular in his lifetime and he received many commissions from abroad but very little is known about the Dutch artist outside of his general demographics. Less than twenty-five paintings extant today are attributed to Bosch.

His bizarre, jam-packed landscapes have therefore proved an easy target for conjectures. Bosch has been called a heretic, mentally unstable, and the Father of Surrealism—an art movement born centuries after his death.

It is now largely agreed that Bosch’s paintings were made with very specific intentions in mind to instruct and communicate. The artist used traditional symbols but also created his own, referencing the Bible and Flemish folklore to create unique visual manifestations of established metaphors and puns. All of this is to say, the moralistic bent of Bosch’s paintings—however fantastical their imagery—do fall seamlessly in line with the didactic literature of the late medieval period. 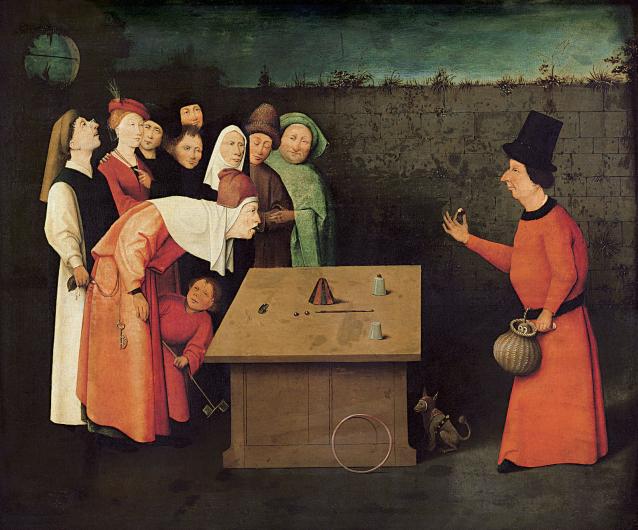 While this early painting is less odd than many of Bosch’s artworks, it is relatively abnormal as it unabashedly depicts magic. It also provides insight into the artist’s beliefs and intentions. The thieving figure in white on the far left might be a Dominican priest. The Dominicans led the Inquisition of this period which focused largely on the persecution of witchcraft. An apparently innocent conjurer juxtaposed with a sinning priest suggests the artist’s awareness of and displeasure with corruption in the church. 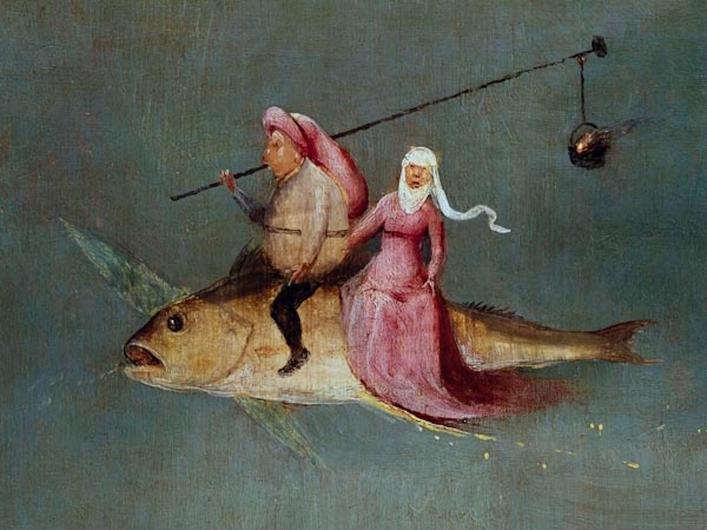 Hieronymus Bosch, detail from the right panel of The Temptation of St. Anthony, c. 1501. Oil on oak panels. 52 in × 90 in. Museu Nacional de Arte Antiga.

In many of Bosch’s later paintings, fantastical creatures and animals outside of their natural environment constantly appear. Often, these take the form of flying fish and swimming birds. Today, scholars generally agree that this is meant to make the viewer feel unsettled and to highlight the nonsense of sinful behaviors that had come to be accepted during the period. This detail is pulled from the top of the tryptic's right panel. 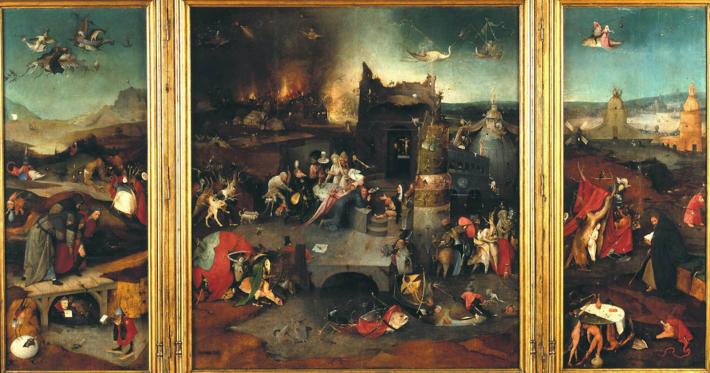 In 1463, the artist’s town of 's-Hertogenbosch lost thousands of houses in a devastating fire. Many scholars believe Bosch, being thirteen at the time, must have witnessed some degree of this event. It is possible that this informed his use of raging fires in hellscapes and his proclivity to expertly depict suffering. 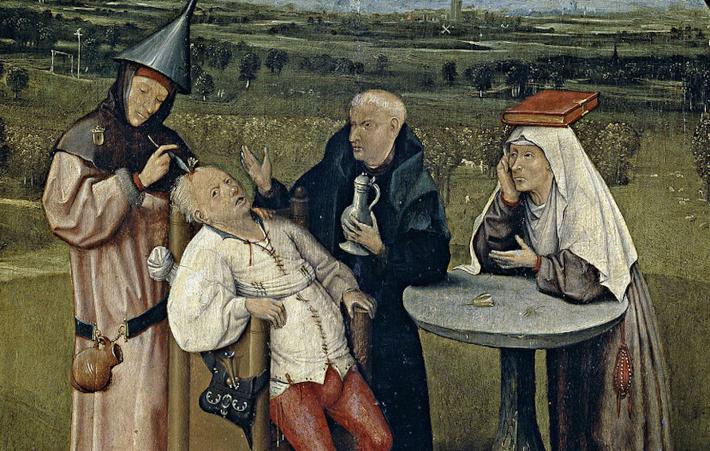 The Stone of Madness

In his hellscapes and scenes of mass debauchery, Bosch depicts scores of individuals doing the most inexplicable things. This painting is a great example of this practice and the logic behind it. In it, a doctor removes a so-called stone of madness—thought to be the source of madness in the fifteenth century—from a patient while two others look on. The funnel worn by the doctor indicates his foolishness and deception. A flower rests on the table—a play on kei, the dutch word for stone which also means bulb. There are likely many lost sayings and folktales that would explain some of the oddest moments from Bosch’s artwork. 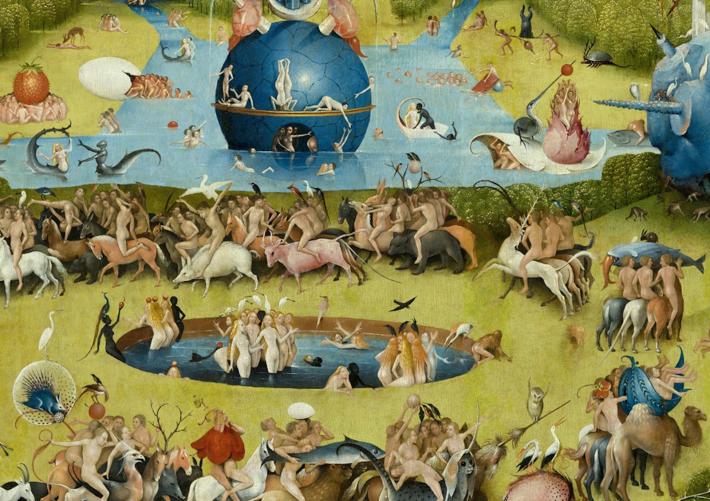 Hieronymus Bosch, detail of central, interior panel in The Garden of Earthly Delights. Oil on oak panels. 81 in × 152 in. Museo del Prado, Madrid.

Bosch regularly features eggs in his paintings, often with people or creatures inside of them. It is thought that he intentionally placed these figures where the yolk would be to indicate their foolishness through symbolism and playing off the early german term yokel. In this detail, you can see at least two eggs—one in the top left and one in the center, towards the bottom. After Bosch’s death, one of his followers painted The Concert in the Egg which is heavily based on a sketch of Bosch’s and his general tendency to paint people inside of eggs. 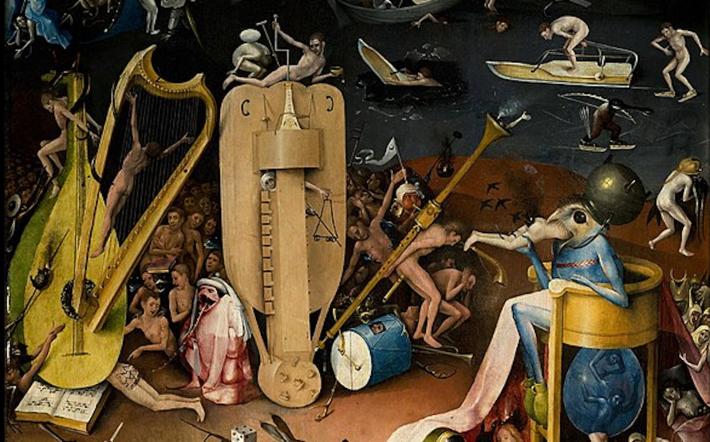 Hieronymus Bosch, detail of right, interior panel in The Garden of Earthly Delights. Oil on oak panels. 81 in × 152 in. Museo del Prado, Madrid.

As mentioned, Bosch’s paintings have a moralistic and didactic bent. In his chock-full depictions of hell, sufferers are not simply being tutored. Their pain is inflected by the very activities that land sinners in this place of eternal damnation. These Biblical lines from the prophet Isaiah tail end a lament for sinners and the suffering they will endure, “And the harp, and the viol, the tabret, and pipe, and wine, are in their fears." 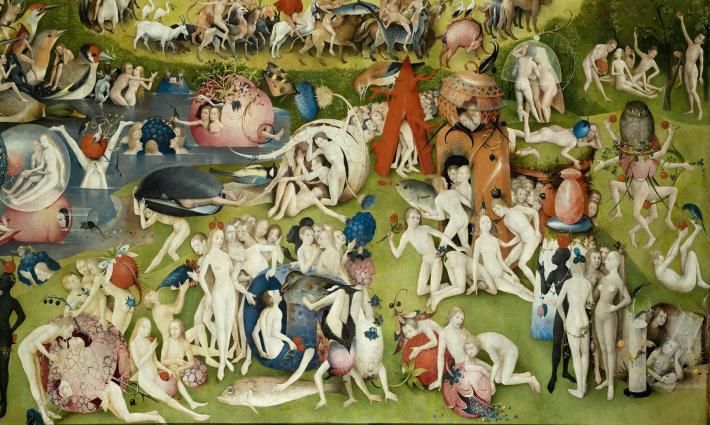 Hieronymus Bosch, detail of central, interior panel in The Garden of Earthly Delights. Oil on oak panels. 81 in × 152 in. Museo del Prado, Madrid.

Once referred to as the strawberry painting, The Garden of Earthly Delights triptych features a central panel that is riddled with a lot of things including many types of berries. This fruit motif serves several purposes. It acts as a reference to the apple from the Garden of Eden and plays off the once popular metaphor for sex, ‘love fruit.’