9 Artworks that Show the Evolution of Jesus Through Art History

Jesus of Nazareth is undoubtedly one of the most famous men who ever lived, and his likeness has been transcribed on paintings, sculptures, and every other artistic medium one can possibly think of. As art developed over the centuries, images of Jesus reflected the characteristics, trends, and values of the artistic periods they were created in. By following the evolution of Jesus in art, we can analyze the progression of art itself. 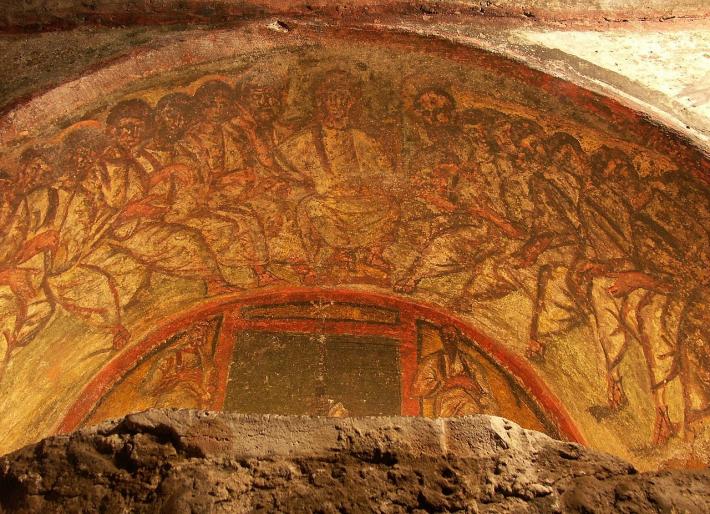 The most notable characteristic of early Christian art is its scarcity. Early Christianity generally operated more like a secret cult than an organized religion. Fearing Roman persecution, early converts were compelled to limit the amount of tangible evidence linking them to the faith. There were also doctrinal reasons for the lack of early Christian art. The Old Testament’s prohibition of graven images meant that early Christians were hesitant to create artwork depicting Jesus. The early Christian art that does exist is largely concentrated in Roman catacombs as pictured above. It was common for wealthy Roman Christians to bury deceased family members among images of their faith. 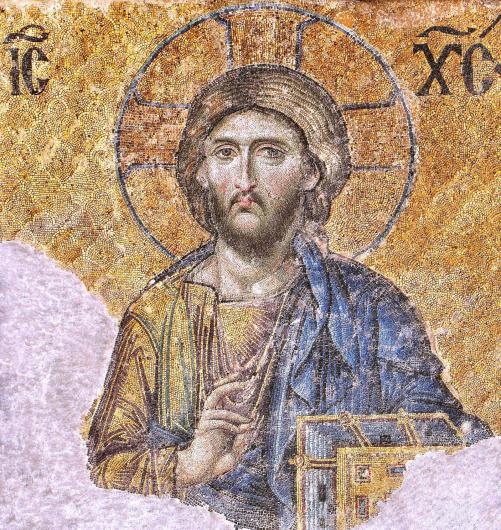 After the fall of the Western Roman Empire in the fifth century, Christian art flourished in the Eastern, or Byzantine, Empire. When Constantine I adopted Christianity, he ushered in a new, more open, era for the religion. Despite its classical roots, Byzantine art generally abandoned the classical emphasis on realism in favor of a more stylized approach. The image of Christ pictured above is one of the only surviving Christian mosaics in the Hagia Sophia, the grand cathedral in Constantinople that was later transformed into a mosque under Ottoman Rule. Stylized and symbolic Christian art would also become the norm in Medieval Europe. It would not be until the Renaissance that Jesus would again be depicted naturalistically. 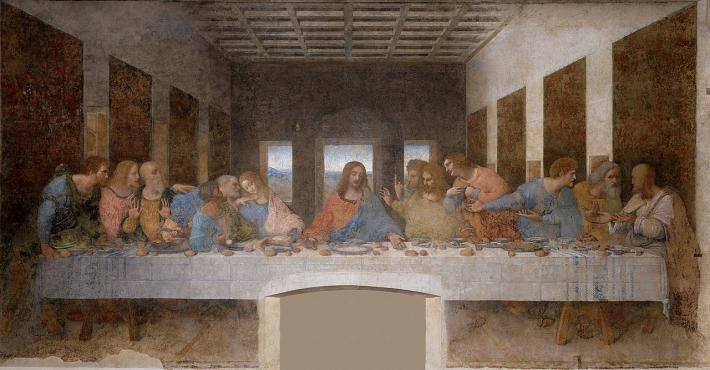 The Renaissance era of European history saw a renewed interest in classical learning, literature, and art. Many pieces of artwork during the Renaissance would portray religious images, but perhaps none of these are more iconic than Leonardo Da Vinci’s The Last Supper. Depicting the moment in which Jesus reveals that one of his apostles would betray him, Da Vinci illustrates the anger and shock in the faces of the apostles. The masterful use of light and shadow in the painting is a testament to the growing popularity of naturalism in Renaissance art, emphasizing accurate and precise details to portray things as they are. 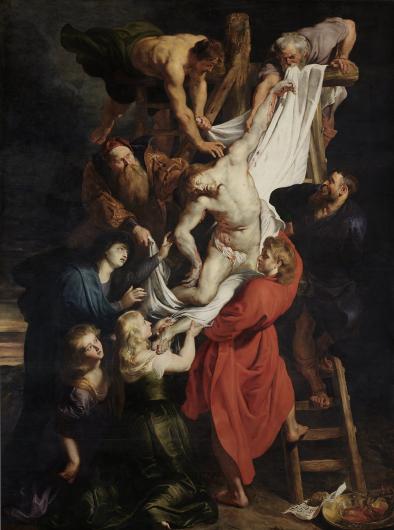 Peter Paul Rubens, Descent from the Cross, 1612 - 14. Oil on panel. Antwerp, Belgium, Cathedral of Our Lady.

This painting by one of the most influential Baroque artists, Peter Paul Rubens, depicts the removal of Christ from the Cross. Decent from the Cross exemplifies several aspects of Baroque art, including a continued emphasis on naturalism. The figures appear very lifelike, their expressions look genuinely human. And, perhaps the most important characteristic of Baroque art, drama is masterfully created by the artist's use of stark lighting, exaggerated pose, and depth of emotion. 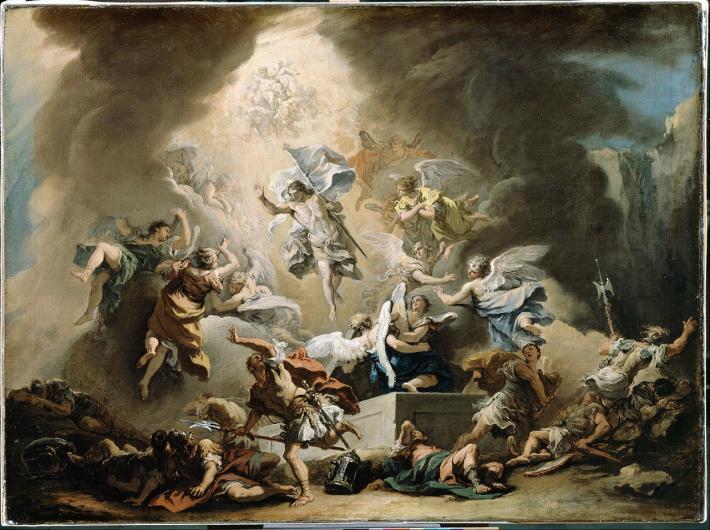 Rococo art would evolve directly out of the Baroque period. Though similar to Baroque in some aspects, Rococo was very much the antithesis of the previous style. While Baroque artists generally used darker colors, dramatic lighting, and depicted somber scenes, Rococo utilized brighter colors, soft lighting, and focused on images of happiness and love. This distinction is easily recognizable when comparing Sebastiano Ricci’s The Resurrection and Peter Paul Ruben’s Descent from the Cross, as the two paintings give very different impressions from one another. 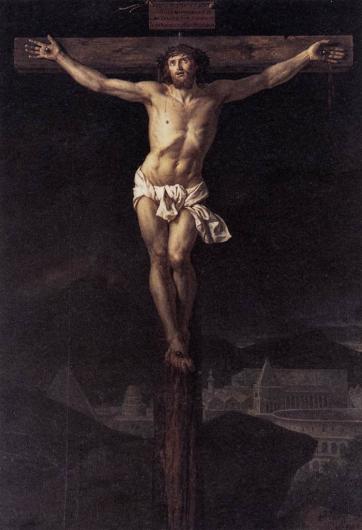 The Neoclassical period, much like the Renaissance, was another revival of classical culture and influences. Inspired by Enlightenment ideals, the subject matter in Neoclassical paintings commonly emphasized morality or virtue and sported a minimal use of color. These characteristics of Neoclassicism were a response to the decadence and exuberance displayed in Rococo pieces and likely helped contribute to the French public’s growing contempt for the aristocracy that culminated in the French Revolution. Jacques-Louis David was the quintessential Neoclassical artist, and his work Christ on the Cross was one of the few pieces of religious artwork he created. The piece exemplifies Neoclassical art with its muted colors, simplicity, and emphasis on the moral virtue of Christ by focusing on when he died on the cross for other’s sins. Religious artwork during this period was rare, as Neoclassical artwork was generally secular and would use Greek and Roman myths and history as its primary subject matter. 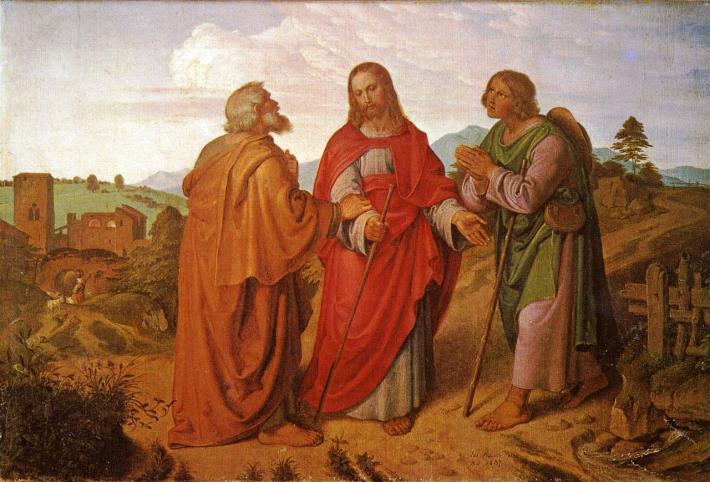 The Romantic era, of the late eighteenth and early nineteenth centuries, was a reaction against the prominence of rationalism during the Enlightenment period. Romantic artists sought to emphasize emotion rather than virtue and reason in their work and generally rejected classical influences in favor of medieval ones. Although most Romantic art was secular, there was a small movement among a group of German Romantic painters set on reviving their spirituality through art. This would later be named the Nazarene Movement, and the painting above by Joseph von Führich depicting Jesus’s walk to Emmaus was one of the many pieces of religious artwork this group created early in the nineteenth century. 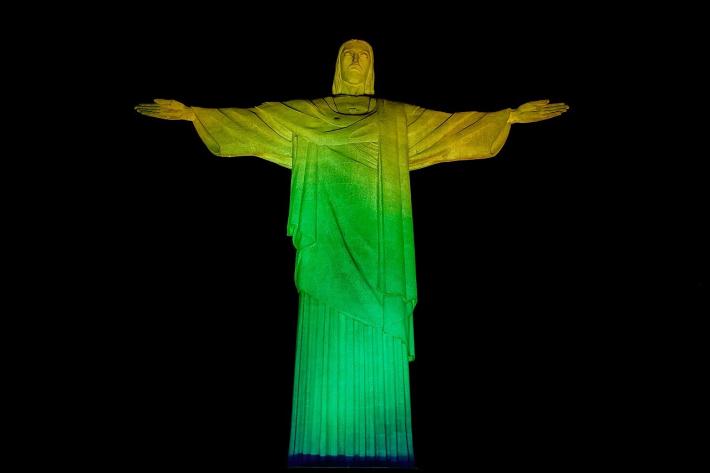 Christian influence over society has waned significantly over the past century, and as a result, so has its influence on the Western art world. Religion has taken a back seat in many people's lives as the world grew more complicated and interconnected, meaning that secular subject matters in art resonate more with average people than religious ones. In spite of this, one of the most iconic statues of Jesus ever was created in the early twentieth century. Christ the Redeemer was part of the international Art Deco movement, where it was common for patrons to commission the construction of decorative statues of historical figures for public spaces.