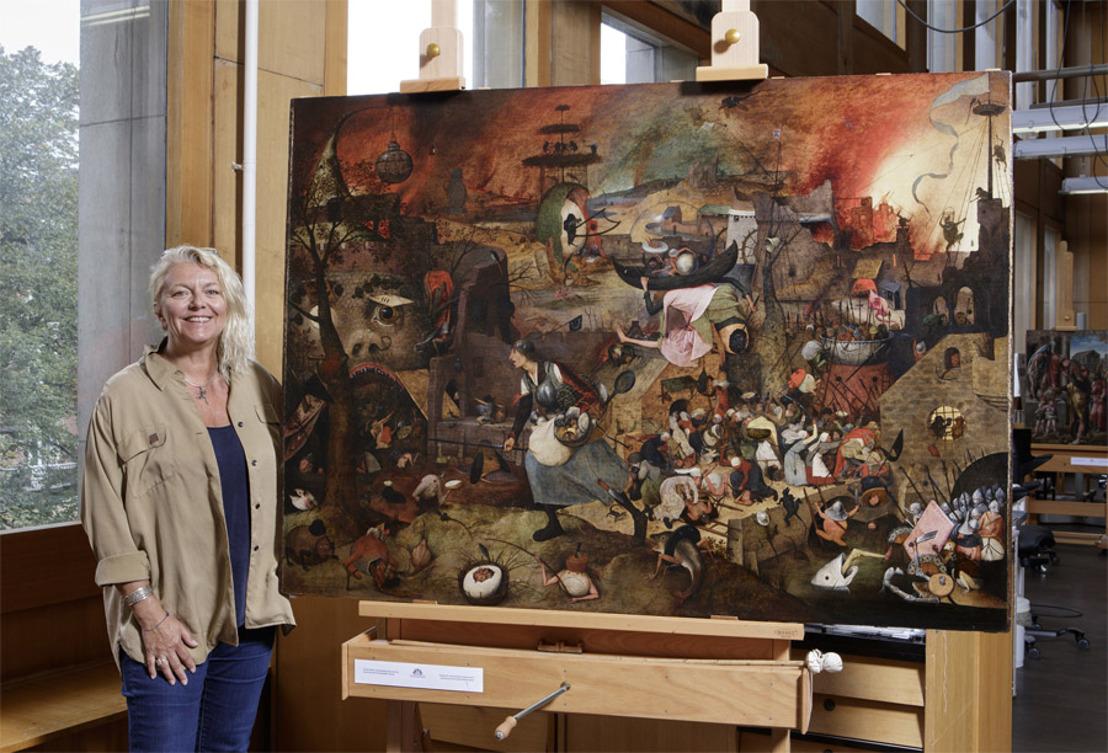 Peter Bruegel the Elder’s Dulle Griet (Museum Mayer van den Bergh, Antwerp) has regained its spectacular original appearance with the rediscovery during restoration of a blue-green sky. Experts at the Royal Institute for Cultural Heritage (KIK-IRPA) in Brussels have worked for a year and a half on the treatment of the world-famous painting. Bruegel’s refined brushwork and a number of striking details lay hidden for decades under layers of overpainting and yellowed varnish. The original wealth of colour is now visible again and the work looks remarkably fresh. The painter’s artistic qualities are done full justice once more. The regained brightness offers a renewed sense of depth: the figure of ‘Dulle Griet’ (Mad Meg) is foregrounded much more firmly and stands out against the sweeping landscape in the background. The multidisciplinary research carried out by the KIK-IRPA team has also resulted in several eye-catching discoveries. The painting does not date from 1561, for instance, but from 1563 – the year in which Bruegel married and moved from Antwerp to Brussels. The Institute’s high-tech equipment allowed analysis of the work’s various underlying layers and it was also determined that Bruegel did not, after all, inscribe the panel with the word ‘Dul’ as a title. Both finds offer a fresh insight into the many mysteries that continue to surround Bruegel. The restored panel is now in excellent shape for the upcoming Bruegel celebrations. It will shortly travel to the Kunsthistorisches Museum in Vienna, where it will be one of the highlights of the large-scale international Bruegel exhibition. Dulle Griet will then return to Museum Mayer van den Bergh in Antwerp in the spring of 2019.

Pieter Bruegel the Elder’s Dulle Griet (‘Mad Meg’) was sent to the Royal Institute for Cultural Heritage (KIK-IRPA) in Brussels for study and restoration in January 2017 and spent over eighteen months there. Every effort was made at KIK-IRPA to get the masterpiece into perfect shape for the international celebrations to mark the 450th anniversary of Pieter Bruegel the Elder’s death. 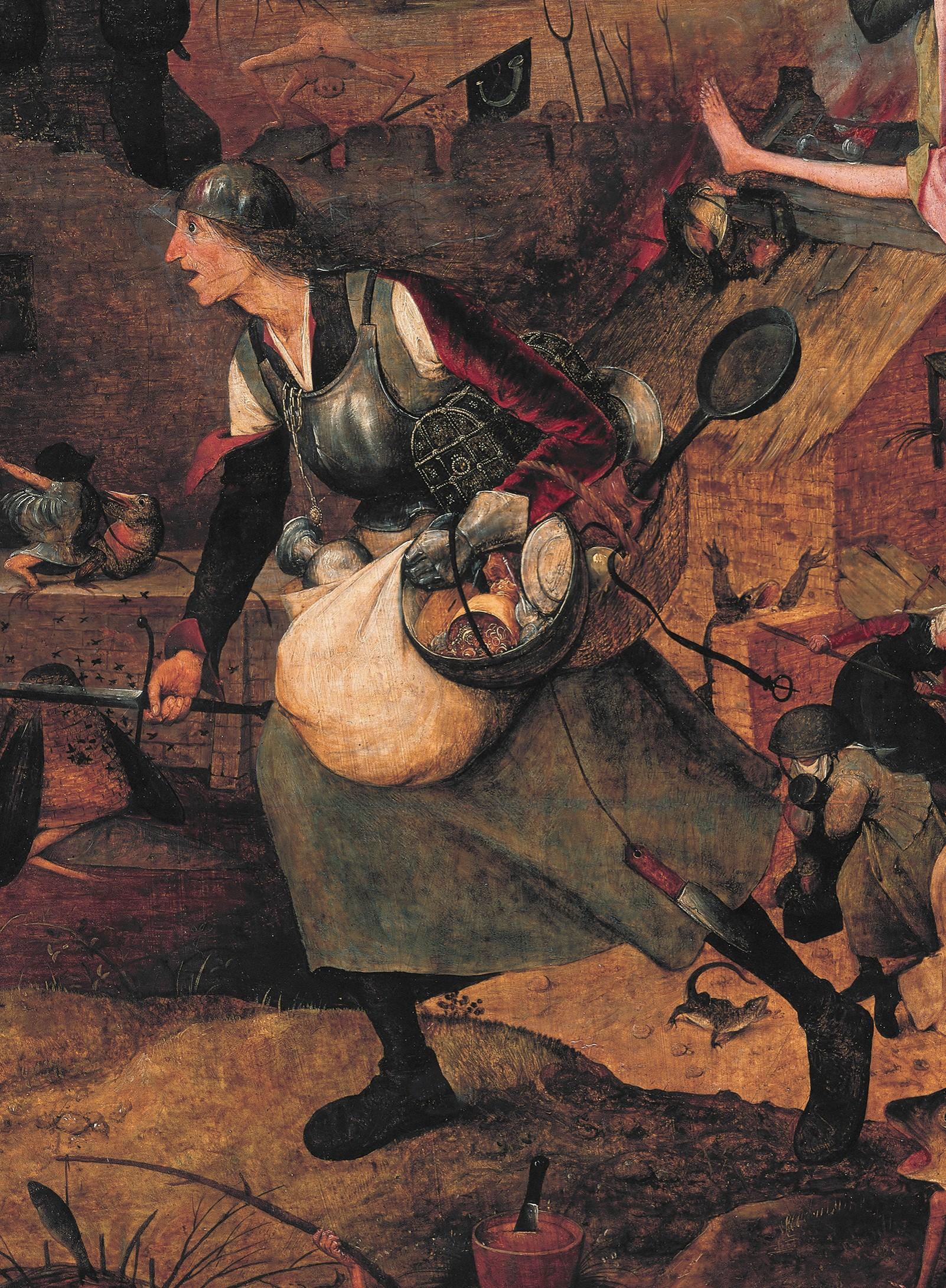 Pieter Bruegel the Elder’s Dulle Griet was subjected to thorough scientific examination at KIK-IRPA using imaging techniques including UV fluorescence and infrared photography and reflectography, as well as analytical methods such as Raman spectroscopy, electron microscopy, gas chromatography and innovative macro-XRF. With the aid of these high-tech tools, the experts were able to analyse the painting’s material history and structure.

The multidisciplinary study made several spectacular discoveries, which amend the results of earlier research performed in 2011 and 2012. The use of new, more advanced techniques allowed the painting’s various underlying layers to be documented and studied one by one. Macro-XRF maps showing the distribution of copper and calcium carbonate reveal that Bruegel did not add the title ‘Dul’ to the panel: the looping inscriptions or scratches were applied later – perhaps accidentally – and were also detected elsewhere in the painting. The dating of the work has also been adjusted by two years, as the date ‘1563’ was discovered on the panel after cleaning and the removal of layers of historical overpainting. The previously accepted date of the work was 1561.

The new dating of Bruegel’s Dulle Griet immediately triggered a flurry of debate as to where the artist produced this infernal scene: Antwerp or Brussels? Bruegel most likely married Mayken Coecke at the Kapellekerk in Brussels in August 1563. The banns are documented as having been taken out on 25 July that year at the Cathedral of Our Lady in Antwerp. It is not known precisely when Bruegel moved to Brussels so the question of where the painting was done cannot be answered at this point. He used a similar type of panel in the years both before and after 1563 and we do not know where he purchased them. Nor is it known how long Bruegel worked on a particular painting. Could he have completed this hell scene in the space of just four or five months and was it done entirely in Brussels? Did he finish the painting in Antwerp before moving to Brussels? Or did the artist take the semi-finished panel with him to his new home? Some of the questions surrounding Bruegel’s Dulle Griet, will have to go unanswered for the time being. 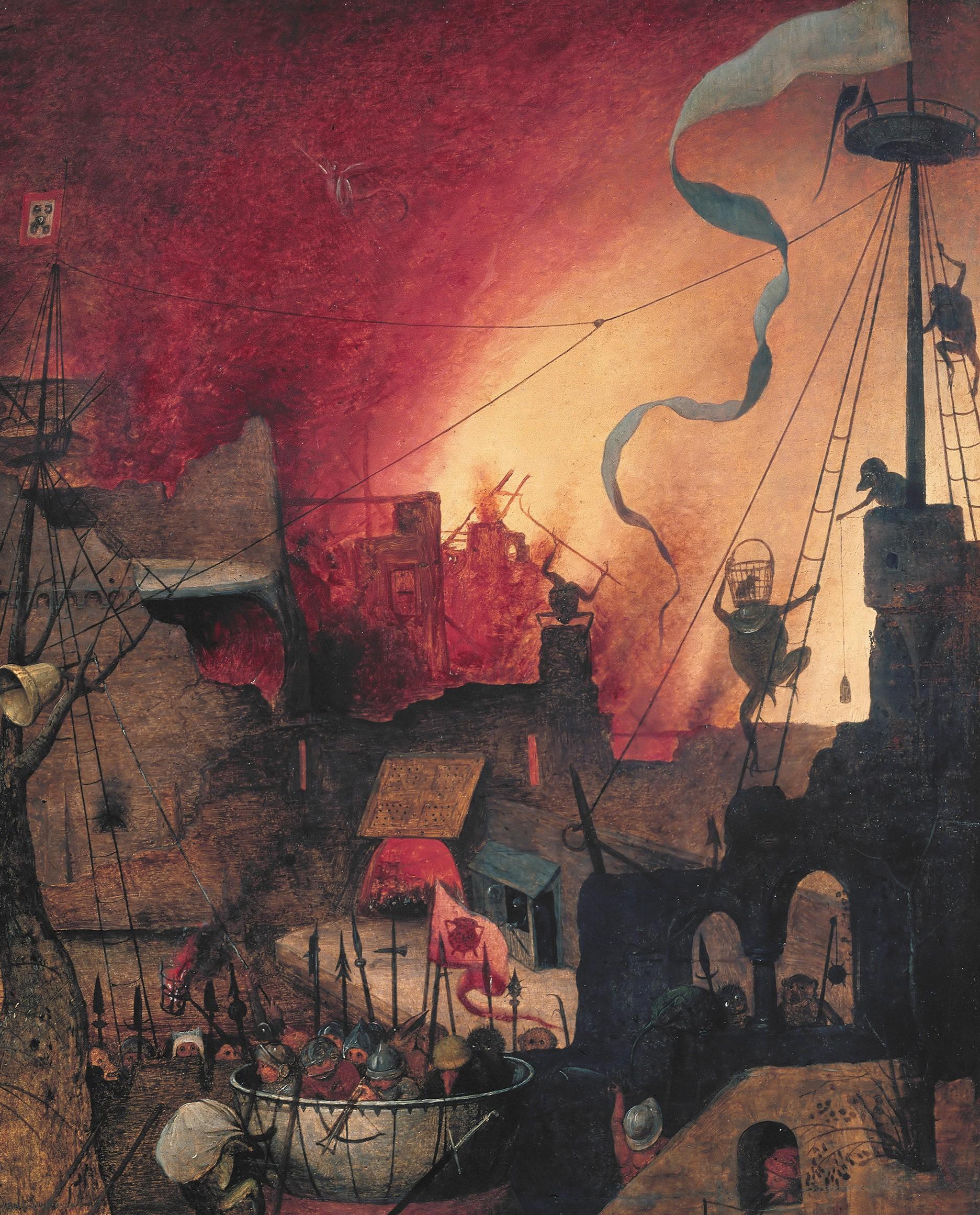 Bruegel’s working method was also studied and was found to be very similar to that seen elsewhere in his oeuvre. The traditional, white chalk ground was covered by a thin, white layer of imprimatura, comprising a blend of chalk, white lead and probably oil. Although the hell scene is large and complex in structure, the underdrawing is economical and precise, with slight deviations from the original composition in certain places. The way Bruegel applied the layers of paint is likewise traditional: he painted the background, leaving spaces for motifs and details. He was undoubtedly aware that the colours would retain their original brilliance if he applied certain figures directly onto the white background rather than the painted background. The paint layers are extremely thin and Bruegel did not use more than two at any point.

The painting was previously known as an obscure, weird landscape with a dark red sky and touches of brown. Technical analysis of a colour drawing of ‘Dulle Griet’ in the Kunstpalast in Düsseldorf revealed a considerable amount of information regarding the Antwerp painting’s original palette. The drawing – previously attributed to Peter Bruegel the Elder himself – turned out to be an early copy after the painting. Its colours are remarkably well preserved and so the sheet offers unique and detailed evidence of the painting’s original colours.

Two of the colour tones in the panel – blue (smalt and azurite) and green – have lost much of their intensity, altering the scene’s overall appearance. Meg’s dress and the flag, for instance, were originally a deep blue. They were done in smalt, however, which was cheaper and more readily available than the extremely costly lapis lazuli. The pigment azurite (bright to greenish blue) in the sky and hell’s hat also has a much darker appearance. The green pigments of the frog, the foliage top left and the figure in the bottom right now have a brownish tinge.

The work looks much fresher after restoration and shows details that were invisible for many years, such as the teddy bear, the finely executed helmets and the beautiful landscape in the background. The colour palette is lighter and more varied. Bruegel’s brushstrokes and his outstanding painterly skills are visible once more. The sense of space has been fully restored and the entire scene displays much greater depth.

The painting is now travelling to the Kunsthistorisches Museum in Vienna, where it will be one of the highlights of the large-scale Bruegel exhibition that will open the international celebrations to mark the 450th anniversary of Pieter Bruegel the Elder’s death. 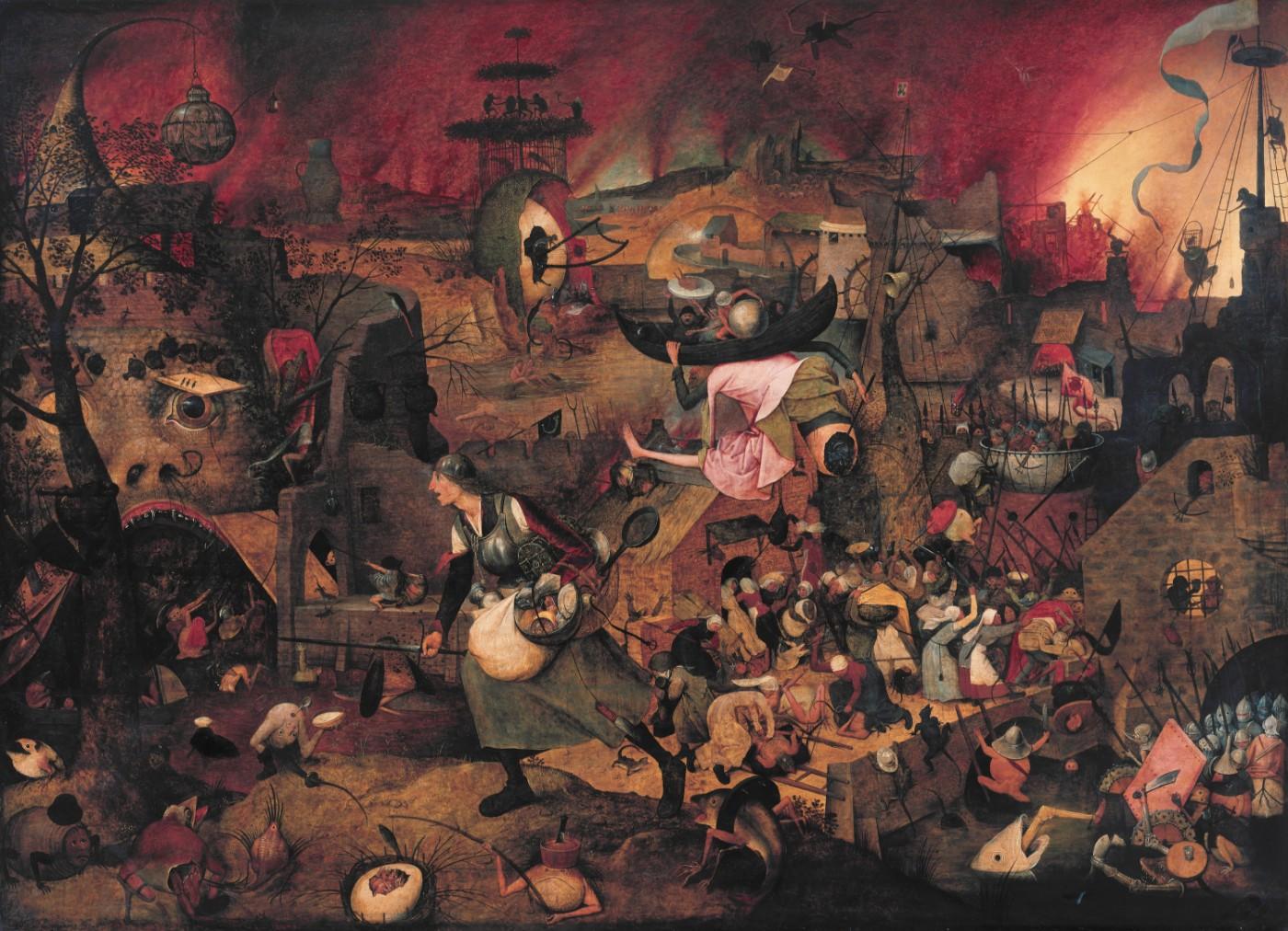 Dulle Griet will return to Museum Mayer van den Bergh in Antwerp in spring 2019, when this museum-goers’ favourite will once more assume a prominent place in the display. Beginning on 5 October 2019, the painting will be the central focus of a new exhibition at the museum, at which visitors will be able to immerse themselves in the world of the nineteenth-century collectors Fritz Mayer van den Bergh (1858–1901) and Florent van Ertborn (1784–1840) – the figures behind the collections of Antwerp’s Museum Mayer van den Bergh and the Royal Museum of Fine Arts. Both collectors were far ahead of their time and shared an eye for the quality and beauty of fifteenth and sixteenth-century art. This was unusual for their respective eras, when Rubens was considered the outstanding master and all the art produced before him had fallen out of favour and been forgotten. With immense passion, Mayer van den Bergh and Van Ertborn acquired and studied beautiful paintings, sculptures, manuscripts and other items. Many of their acquisitions were bargains, some were an investment and from time to time there were brilliant finds. Visitors will get to see a selection of highlights from their respective collections.