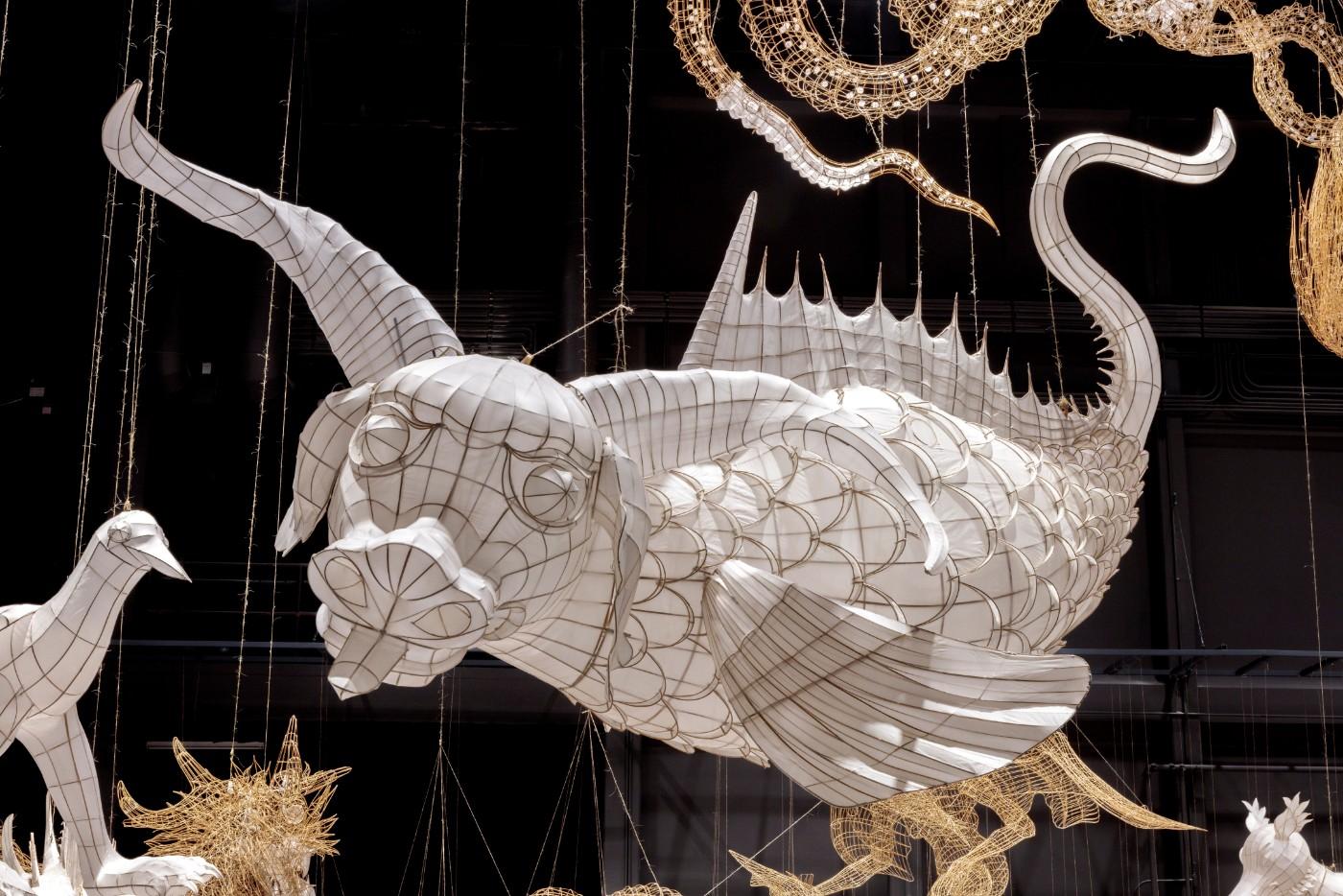 Los Angeles, CA — Marciano Art Foundation is pleased to announce the next MAF Project, a solo exhibition of Chinese artist Ai Weiwei, on view from September 28, 2018 through March 3, 2019. This exhibition is Ai’s first major institutional exhibition in Los Angeles and will feature the new and unseen work Life Cycle (2018)–a sculptural response to the global refugee crisis. The exhibition will also present iconic installations Sunflower Seeds (2010) and Spouts (2015) within the Foundation’s Theater Gallery.

“We are honored and thrilled to be able to host Ai Weiwei’s first institutional presentation in Los Angeles,” says Maurice Marciano, founder of Marciano Art Foundation. "Ai Weiwei's long history as a thoughtful, engaged, and provocative artist falls directly in line with the goals of the Foundation. We are so thrilled to be a part of his big moment happening in our city this fall."

On view for the first time in the Foundation’s Black Box, Life Cycle (2018) references the artist’s 2017 monumental sculpture Law of the Journey, Ai’s response to the global refugee crisis, which used inflatable, black PVC rubber to depict the makeshift boats used to reach Europe. In this new iteration, Life Cycle depicts an inflatable boat through the technique used in traditional Chinese kitemaking, exchanging the PVC rubber for bamboo. 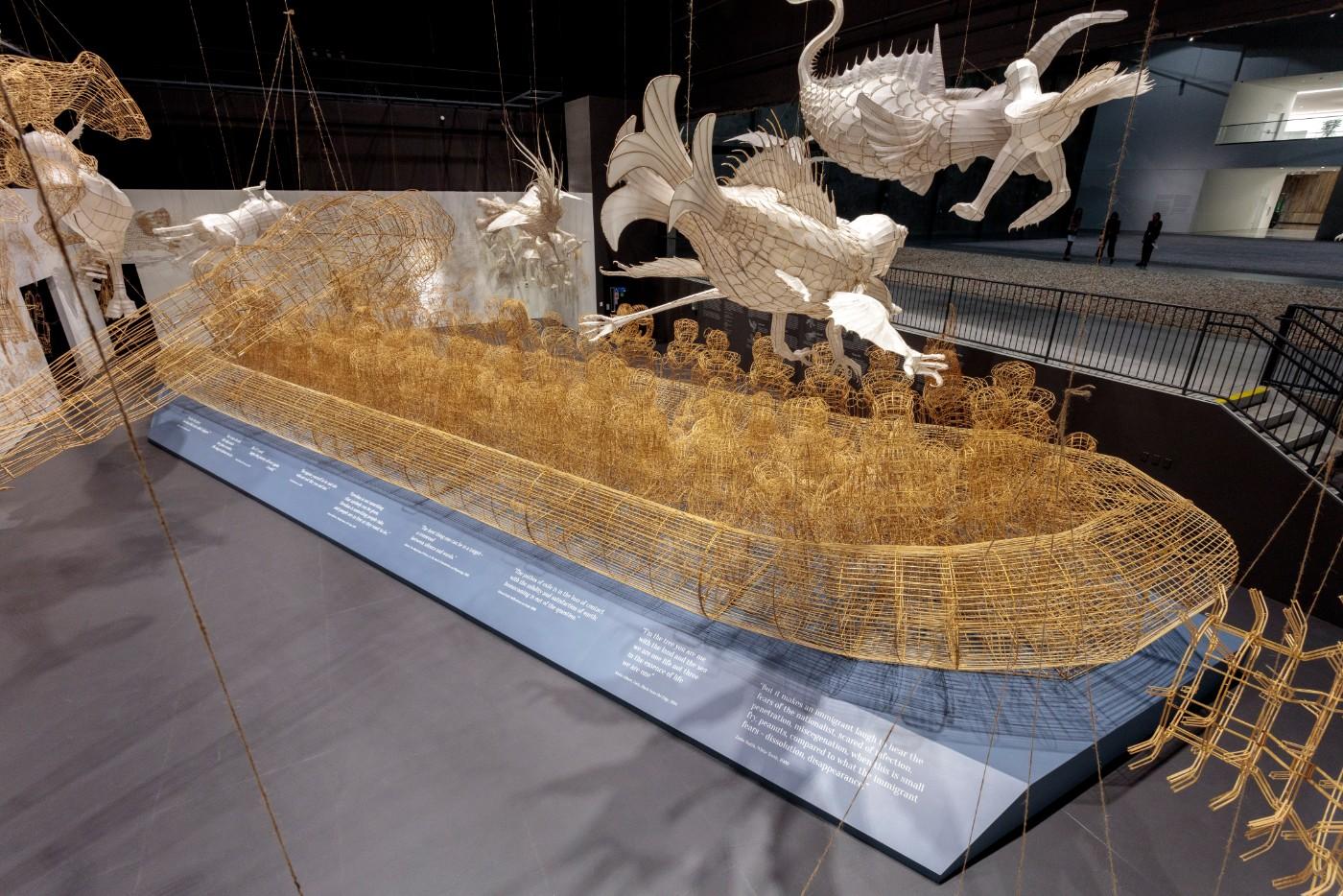 Suspended around the boat installation are figures crafted from bamboo and silk. In 2015, Ai Weiwei began creating these figures based on mythic creatures from the Shanhaijing, or Classic of Mountains and Seas. The classic Chinese text compiles mythic geography and myth; versions of the Shanhaijing have existed since the 4th century B.C. These works are crafted in Weifang, a Chinese city in Shandong province with a tradition of kite-making dating back to the Ming dynasty (1368–1644).

Windows (2015), which hangs along the perimeter of the Black Box, draws from Chinese mythology, the tales and illustrations of the Shanhaijing, the history of 20th-century art, and the life and works of the artist. The vignettes feature a dense mix of biographical, mythological, and art historical references to craft a contemporary story. Similar to chapters in a book, or acts in a play, the various scenes include the mythological creatures of the Shanhaijing alongside bamboo versions of Ai’s earlier works, such as Template and Bang, and homages to Marcel Duchamp and Jasper Johns. A central theme running through the ten vignettes is freedom of speech and Ai’s efforts in defending it. Motifs recurring in the artist’s practice—the bicycle, the alpaca, symbols of state surveillance and control—are repeated and multiplied. 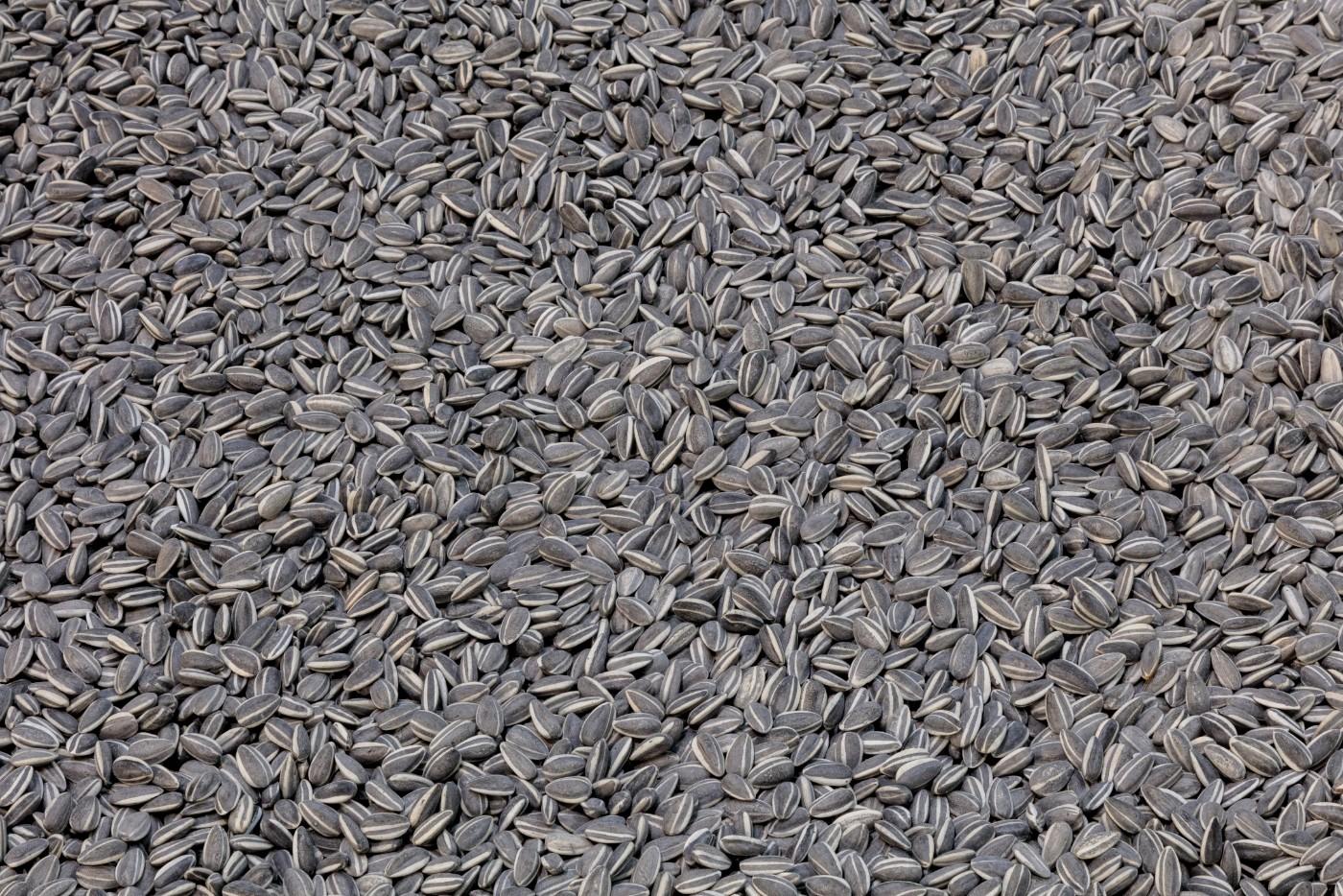 This multifaceted installation is a continuation of Ai’s ongoing engagement with politics and social justice. It follows the release of his feature-length documentary, Human Flow (2017), which depicts the refugee crisis on film. In the artist’s op-ed for the Guardian in February 2018, he writes, “I was a child refugee. I know how it feels to live in a camp, robbed of my humanity. Refugees must be seen as an essential part of our shared humanity.”

In the Theater Gallery, Sunflower Seeds (2010), is composed of 49 tons of individual porcelain sunflower seeds made by 1600 artisans from an ancient porcelain production center in Jingdezhen, in China’s Jiangxi province. This installation further expands upon reoccurring themes, such as authenticity, the individual’s role in society, geopolitics of cultural and economic exchange. The work also brings to mind the propaganda posters of the Cultural Revolution, depicting Mao Zedong as the sun and the citizens as sunflowers turning toward him.

Spouts (2015) piles together thousands of antique teapot spouts dating as far back to the Song dynasty (960–1279). Following Ai’s practice of repetition and multiplication, Spouts can be seen as a metaphor for a mass of mouths, and a widespread yearning for freedom of speech despite its continuing restriction throughout many societies. Spouts was previously exhibited in Galleria Continua in Beijing, the 21er Haus in Vienna, and the Sakip Sabanci Museum in Istanbul. This is the first time the complete work is on view. 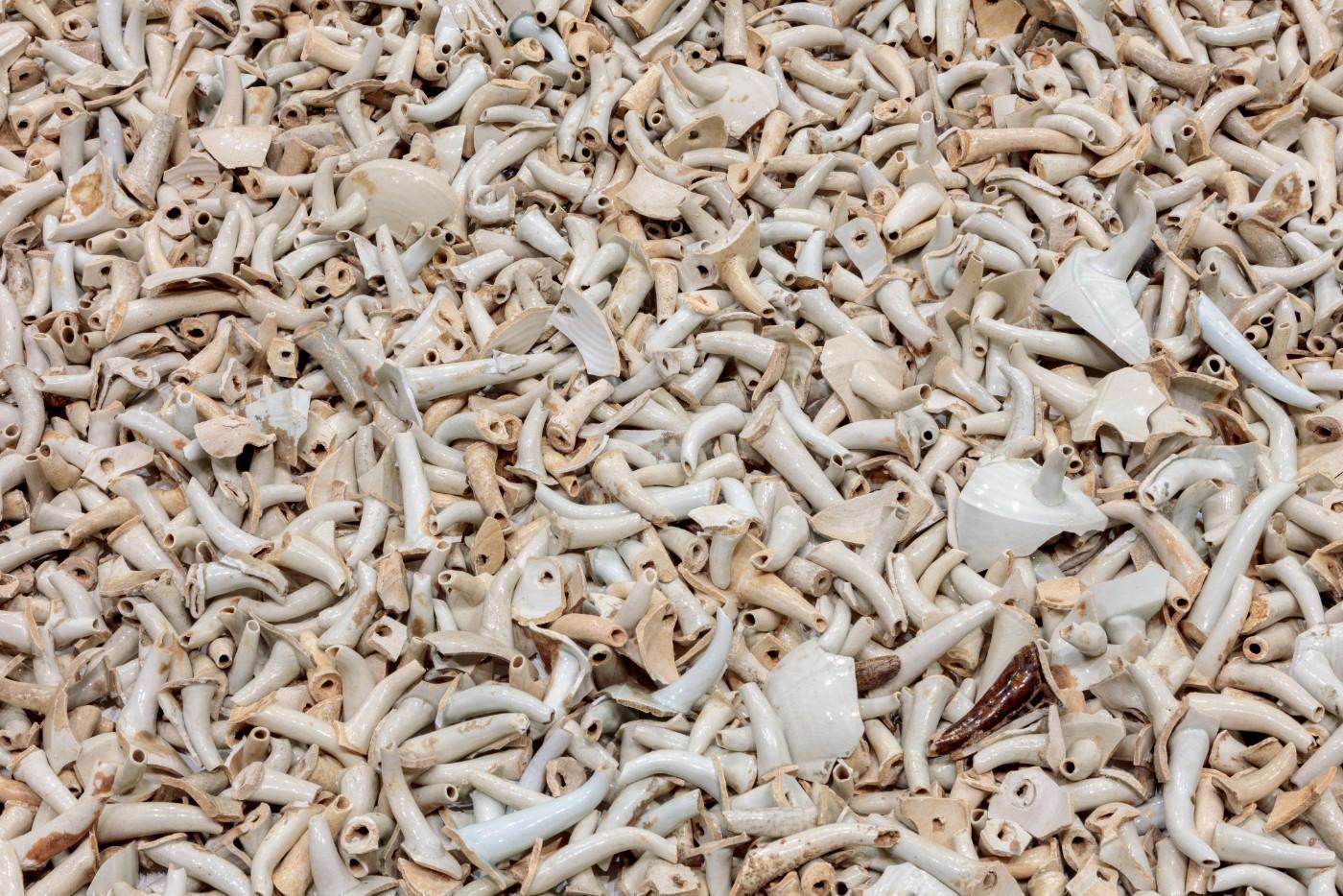 Ai Weiwei: Life Cycle will be accompanied by an illustrated publication, the third in MAF’s Project Series featuring an essay written by mythologist, writer, and professor Martin Shaw. The Marciano Art Foundation dedicates this exhibition in loving memory of Joshua Roth (1978-2018).

About AiWeiwei
Ai Weiwei was born in 1957 in Beijing and currently lives and works in Berlin. He attended the Beijing Film Academy and later, on moving to New York (1983–1993), continued his studies at the Parsons School of Design. Major solo exhibitions include Helsinki ArtMuseum (2016), Royal Academy of Art,London (2015), Martin Gropius Bau, Berlin (2014), Indianapolis Museum of Art (2013), Hirshhorn Museum and Sculpture Garden, Washington D.C. (2012), Taipei Fine Arts Museum, Taiwan (2011), Tate Modern, London (2010) and Haus der Kunst, Munich (2009). Architectural collaborations include the 2012 Serpentine Pavilion and the 2008 Beijing Olympic Stadium, with Herzog and de Meuron. Among numerous awards and honors, he won the lifetime achievement award from the Chinese Contemporary Art Awards in 2008, the Václav Havel Prize for Creative Dissent from the Human Rights Foundation, New York in 2012, and the Ambassador of Conscience Award from Amnesty International in 2015; he was made Honorary Academician at the Royal Academy of Arts, London in 2011.

About Marciano Art Foundation
The Marciano Art Foundation (established in 2013) presents exhibitions featuring works from brothers Maurice and Paul Marciano’s expansive collection of contemporary art. The collection, built largely over the last decade, includes installation, sculpture, photography, film and a wide array of paintings by some of today’s most important and influential contemporary artists, from emerging to established, from the U.S. and abroad. Guest-curated exhibitions will rotate every few months, enabling the foundation to reveal the breadth and depth of the collection over time, while some signature works will remain on view for longer periods. MAF will also present occasional temporary exhibitions featuring works on loan from museums and private collections, alongside pieces from MAF collection. MAF is situated in the historic Scottish Rite Masonic Temple built artist, designer and educator Millard Sheets in 1961.

The renovation of the 110,000 square-foot building was overseen by wHY Architecture’s Kulapat Yantrasast and features over 55,000 square feet of exhibition space and on-site storage. Former lounges, banquet halls and a 2,000- seat theater have been transformed into unparalleled exhibition spaces for contemporary art. A relic room, organized by Bard College professor Susan L. Aberth, features objects and ephemera left behind by theMasons, acknowledging the history of the site. MAF also features an outdoor sculpture garden, bookstore, and café.