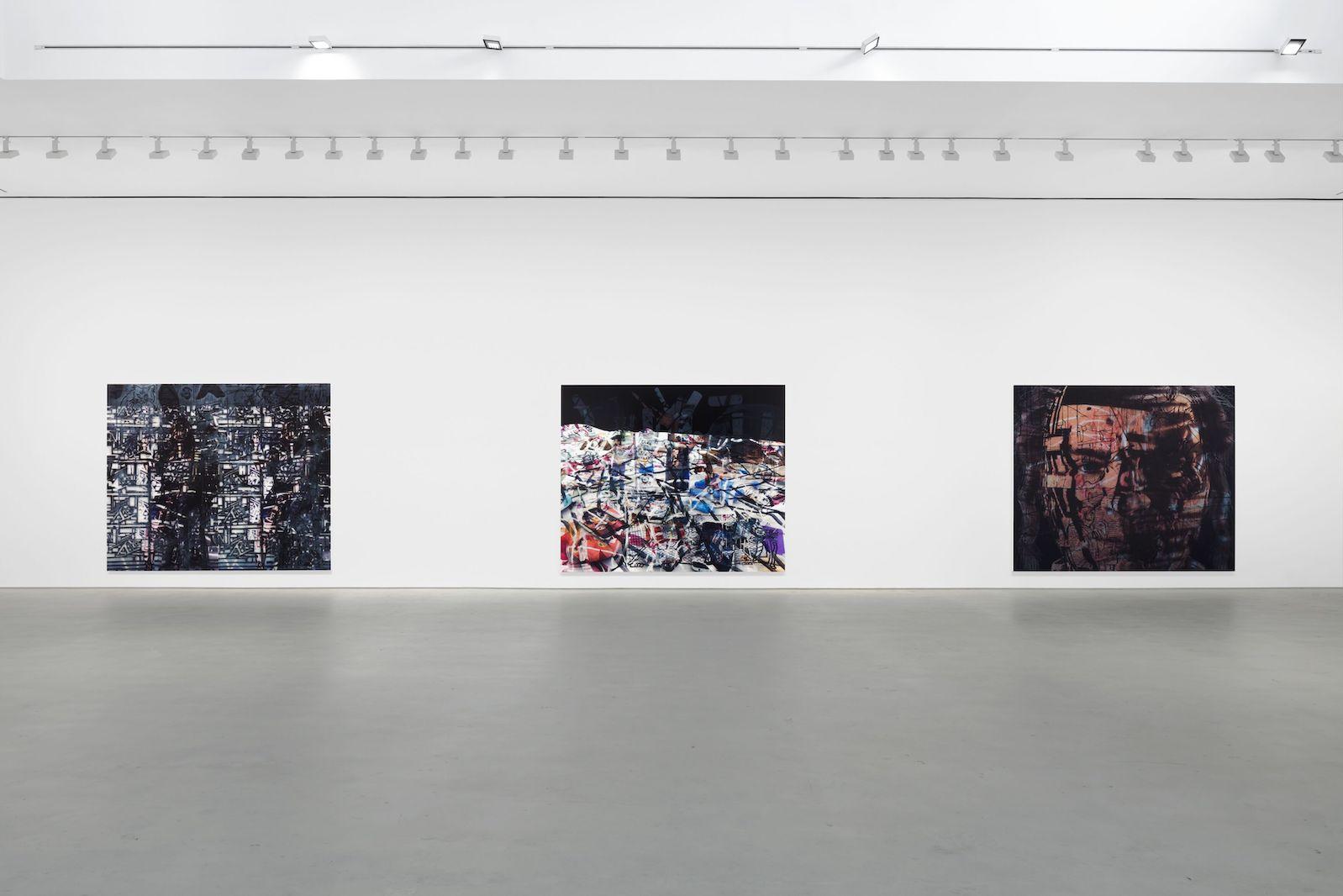 In 1988, artist Lynn Hershman Leeson told an interviewer to “imagine a world in which there is a blurring between the soul and the chip.” When it comes to humans and technology, I always thought the blurring would be physical. Humans would reproduce with robots, or we’d get chips implanted into our brains. After eighteen pandemic months in which I’ve spent so much time on the internet that I can’t tell the difference between my own inner monologue and that of the people I follow on Twitter, I realized there’s no robot sex necessary. The Internet has insidiously taken over our visual and verbal language.

That mental blur—and the ways in our internet lives, and especially internet vernacular, is subtly interwoven into our actual lives—is a theme of Reality Ender, painter Avery Singer’s first New York show, on view at Hauser & Wirth through October 30, 2021.

Sometimes the theme is a little too on the nose, as with Edgelord (2021), a photograph of stubbled Robespierre, his portrait defaced with a variety of drawings in black acrylic, like graffiti on a bathroom wall. Instead of a cheeky remark, a necessary dig against a historic male figure, I thought the defacing resembles the math lady meme, in which a confused woman is similarly superimposed with math equations. There’s a quick chuckle of glee in seeing a meme in a historical figure, but not much else. 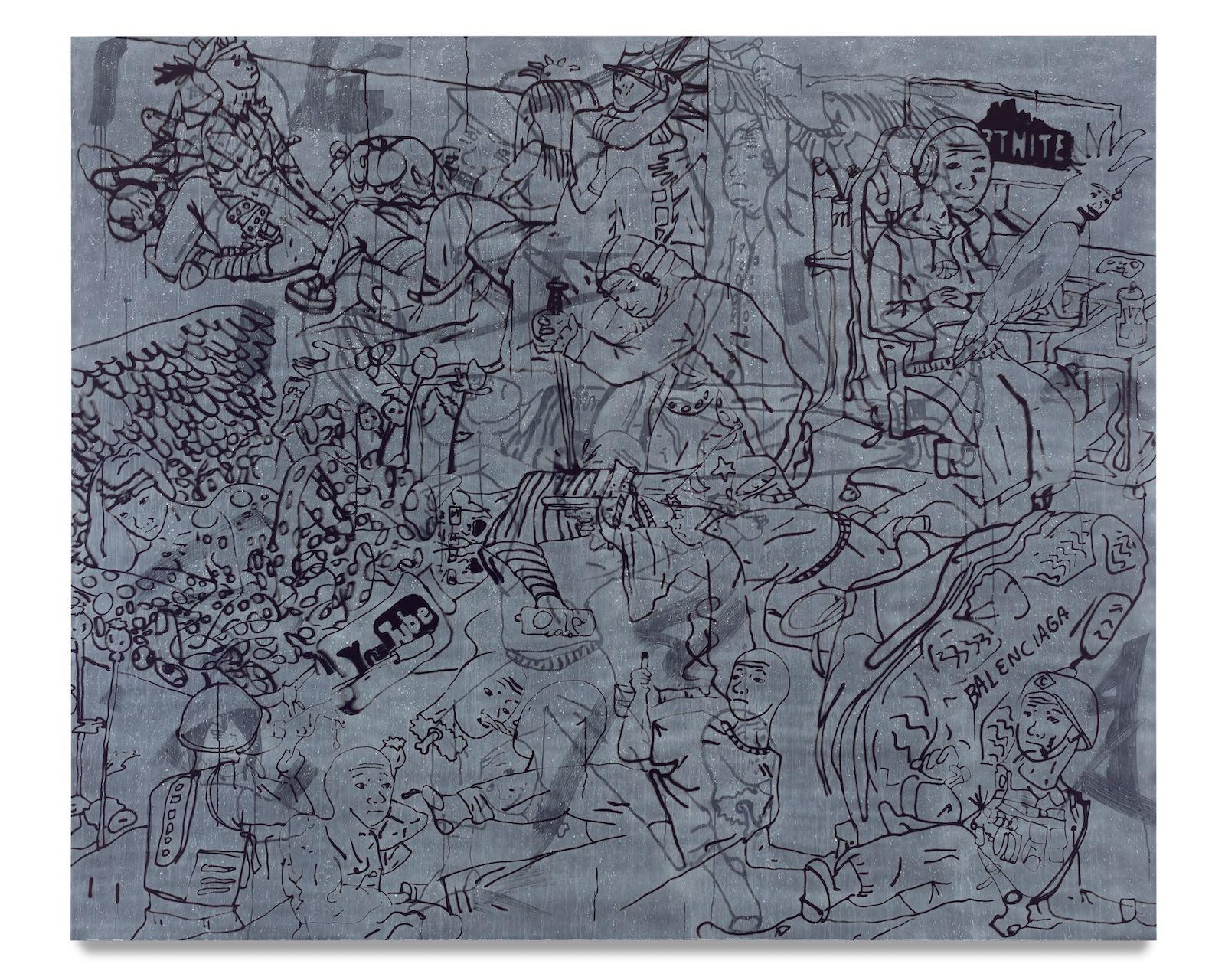 More effective is Wojak Battle Scene (2021), which portrays the most disorganized army I’ve ever seen. Against a green backdrop, soldiers fight individual battles that never seem to coalesce. One soldier stabs a sword into a man with a striped shirt below him who looks like he’s sleeping. In another corner, a man with headphones plays Fortnite, a battle-focused video game. Nearby, a soldier points a gun at nothing. YouTube and Balenciaga logos are interspersed too. Even in wartime, we can’t resist the urge to place advertisements, or to think about a video we just watched on YouTube.

China Chalet (2021) connects to the internet but also introduces another theme that runs through the show: the promise and peril of intoxication. It depicts the detritus of a night out at the now-shuttered restaurant and club. There are bottles of pills, poppers, and other drugs strewn across white tablecloths, labels from White Claw hard seltzers, and lots and lots of iPhones, because even when we’re not confined to the internet, we’re still performing for it. Layered over the display are flashes of red and blue paint, and lines of acrylic rubber, making deciphering what’s underneath like trying to piece together the moments of a half-remembered night. It made me miss them. 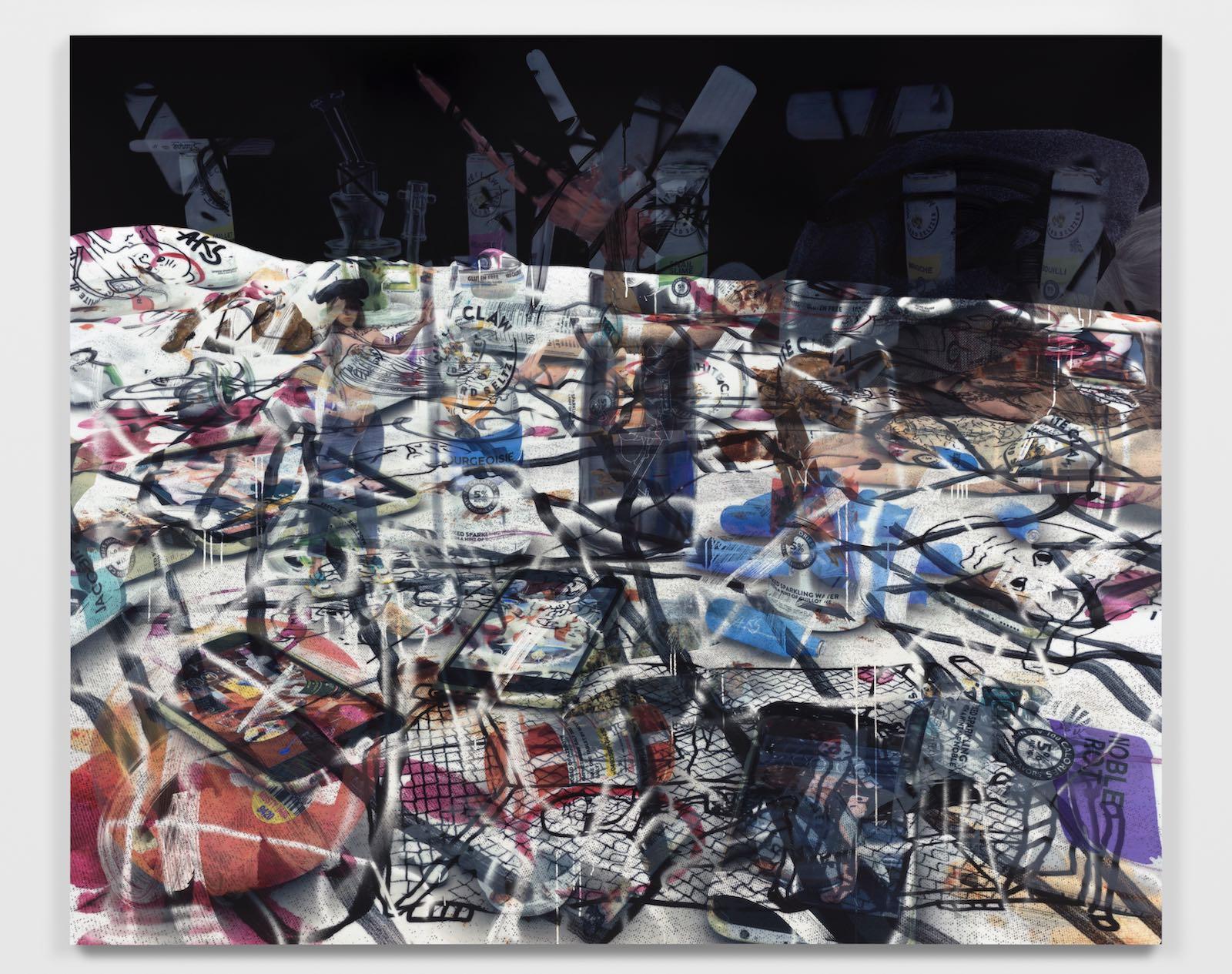 While these works provoked knowing recognition, I was even more impressed by Singer’s black and white paintings, created with Sketch-Up, an architectural software that shows her drafting skills. Sculptor (2021), is almost cubistic in it’s rendering of the subject, head down, hands clasped in concentration, a bottle of beer just barely in the frame. As in China Chalet, there’s black liquid rubber obscuring the figure, but deciphering the different pieces makes the viewer feel like a detective. The search is rewarded with glimpses of emotion, especially in the hands, coiled together with tension. The same is true of its neighbor, The Studio, (2012) with jumbled chairs stacked on each other, the artist just visible underneath it all, covered in the same rubber marks dripped like an updated Pollock technique. It’s a technically impressive and knowingly funny comment on how we romanticize artists. They too are at any minute in danger of collapsing under the weight of furniture and paperwork. I also loved Technique (2021) which resembles rows of New York scaffolding, with windows behind them, and people behind those windows, attempting to live their lives amidst the chaos. It’s a portrait of a city constantly under construction, one that we somehow live in despite the jackhammers. 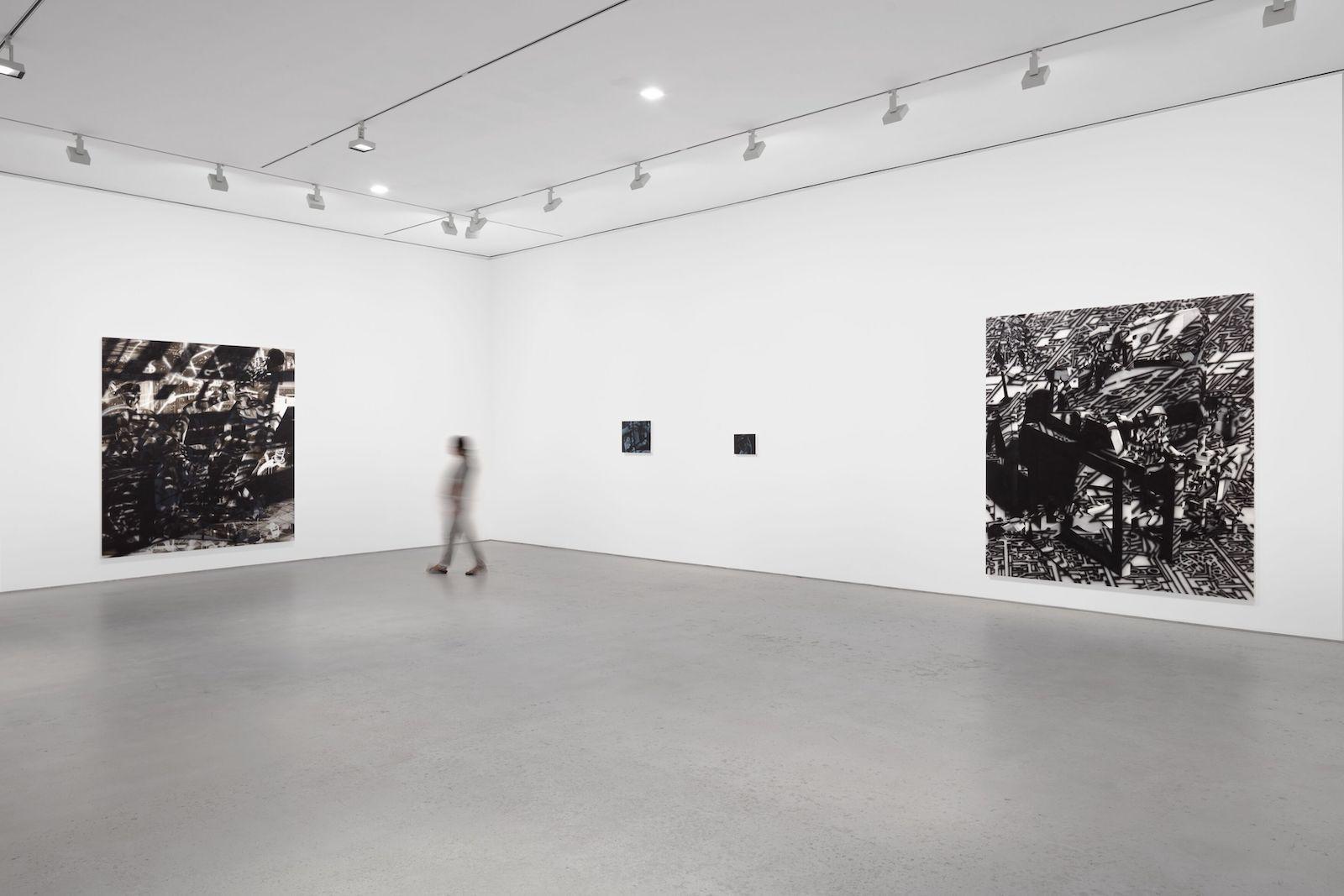 Ultimately, I think the more timely work will get the most attention, but viewers should spend equal if not more time on the paintings that show Singer’s technical mastery. Those make you work a little harder to piece together what you’re seeing, but it’s worth it.