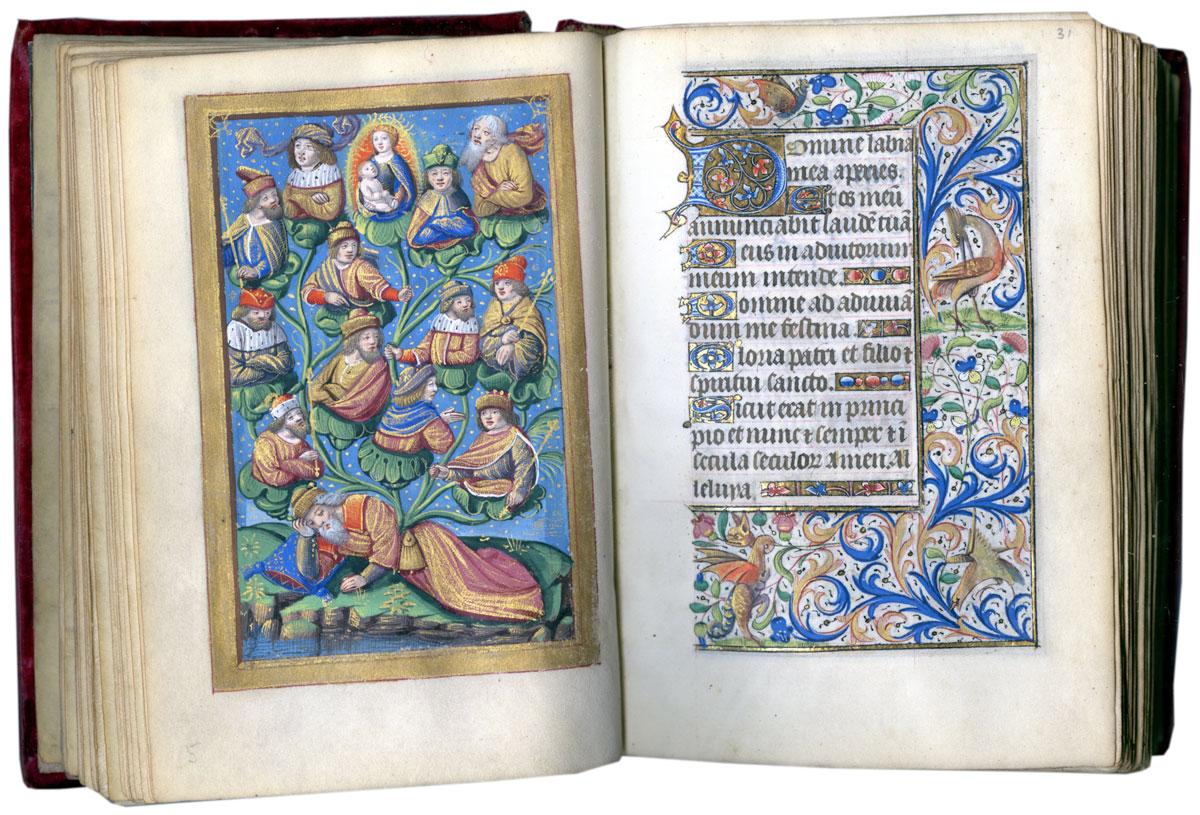 The Monypenny Hours (Use of Paris) in Latin and French, illuminated manuscript on parchment France, Paris, c.1490.

Aimlessly strolling through Paris in springtime may be a rite of passage for star-crossed lovers, but tomorrow rare books and manusripts dealer Les Enluminures invites walkers to promenade with purpose on Saturday, April 8 at 10:00 a.m., to examine the origins of the book trade when medieval booksellers, binders, and illuminators plied their trade in the heart of the city. Advance registration is essential, so call +33(0)1 42 60 15 58 or email info@lesenluminures.com tout de suite if you’re interested.

In a sort of bibliophile’s trip down memory lane, the group--led by medieval book and manuscript expert Christopher de Hamel and Les Enluminures founder Sandra Hindman--will meet outside the west front of Notre-Dame, right where the outline of the medieval street rue Neuve Notre-Dame is marked in the ground. The starting point demarks where the city’s book trade began to blossom starting around 1200. Medieval tax records pinpoint the exact locations of bookish businesses such as those of thirteenth-century booksellers Emery d’Orléans and Nicholas Lombard. Further along, participants will see where the bookstand of husband-and wife duo Richard and Jeanne de Montbaston once stood. The couple copied and illuminated dozens of manuscripts, most notably the popular and controversial romances of the Roman de la Rose. (Jeanne’s illustrations of monks and nuns harvesting nut phalluses from trees and performing other erotic acts have long fascinated scholars and casual observers.)

From the rue Neuve-Notre-Dame the group will cross the Petit Pont and head up the rue Saint-Jacques where booksellers Alain Spinefort and Claude Jaumar set up shop in the shadows of the now-demolished Dominican convent that lent its name to the street. A right turn onto the appropriately named rue de la Parcheminerie reveals the former residences of scribes and illuminators such as Ameline de Maffliers. A quick glance down the diminutive rue Boutebrie (originally rue Erembourg de Brie) where the work of illuminators such as Jean le Noir, Jean Pucelle, and Honoré no doubt influenced the temporary name change of the street to rue des Enluminures in the mid-1200s. Finally, the group will retrace its steps across the Ile de la Cité and head back to Les Enluminures at rue Jean-Jacques Rousseau where a light lunch will be served, and participants will be invited to examine (and purchase) original manuscripts created on those very streets centuries ago.

The promenade coincides with an an exhibition on display at Les Enluminures entitled Made in Paris: Spotlight on the Medieval Book Trade, open to the public from now until April 28. Capping something of a book-lover’s trifecta, the Salon International du Libre Rare & de l’Objet d’art unfurls at the Grand Palais this weekend as well. (Les Enluminures will be manning Stand C5 if you feel like saying bonjour.)

L’amour des livres anciens is most definitely in the air this spring in Paris.