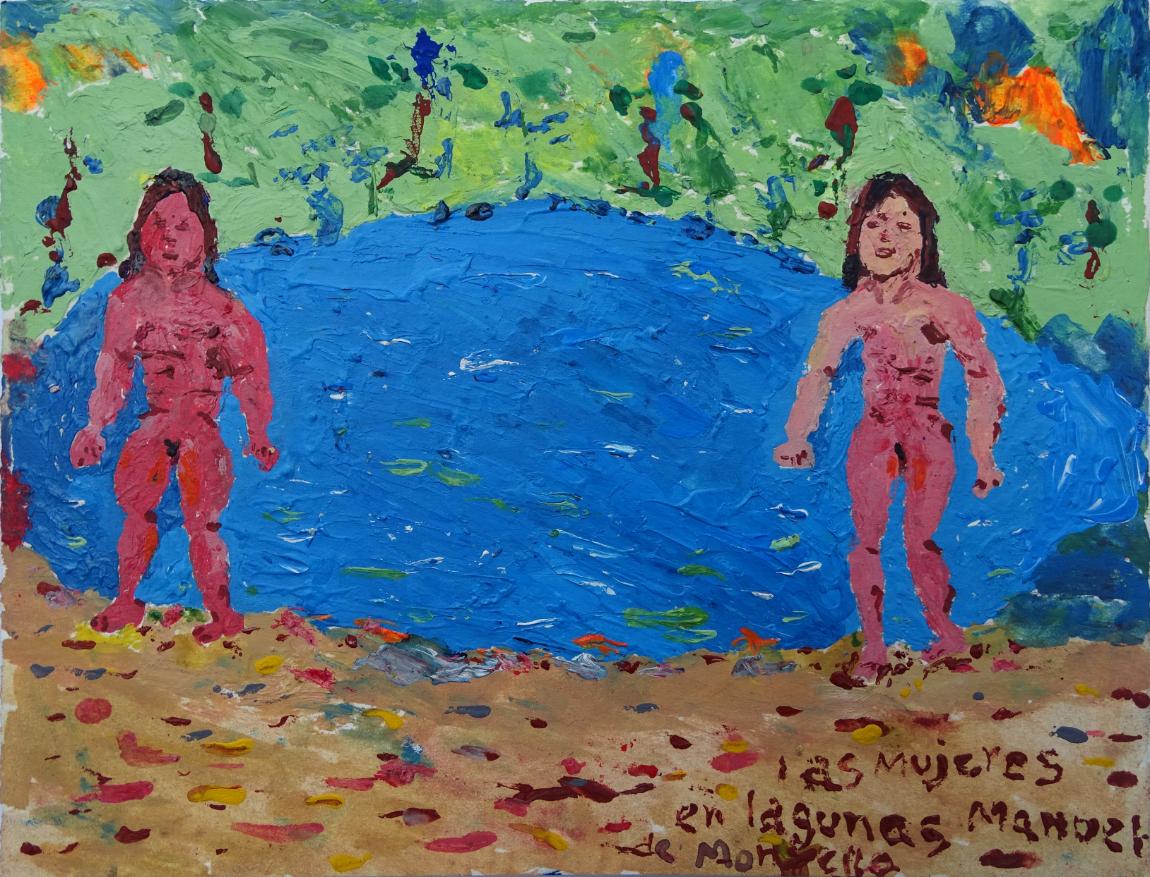 When the Outsider Art Fair (OAF) opens on January 29, it will have a decidedly post-pandemic stride. Rather than hosting the fair in one large venue as it has in years past, its owner, Andrew Edlin, will be holding the fair of self-taught art in a hybrid format with seven curated exhibitions across five locations around Manhattan combined with an online viewing room featuring 43 global exhibitors.

“I’m not into capitulating so fast,” said Edlin, whose eponymous gallery has, thus far, managed to survive the pandemic. 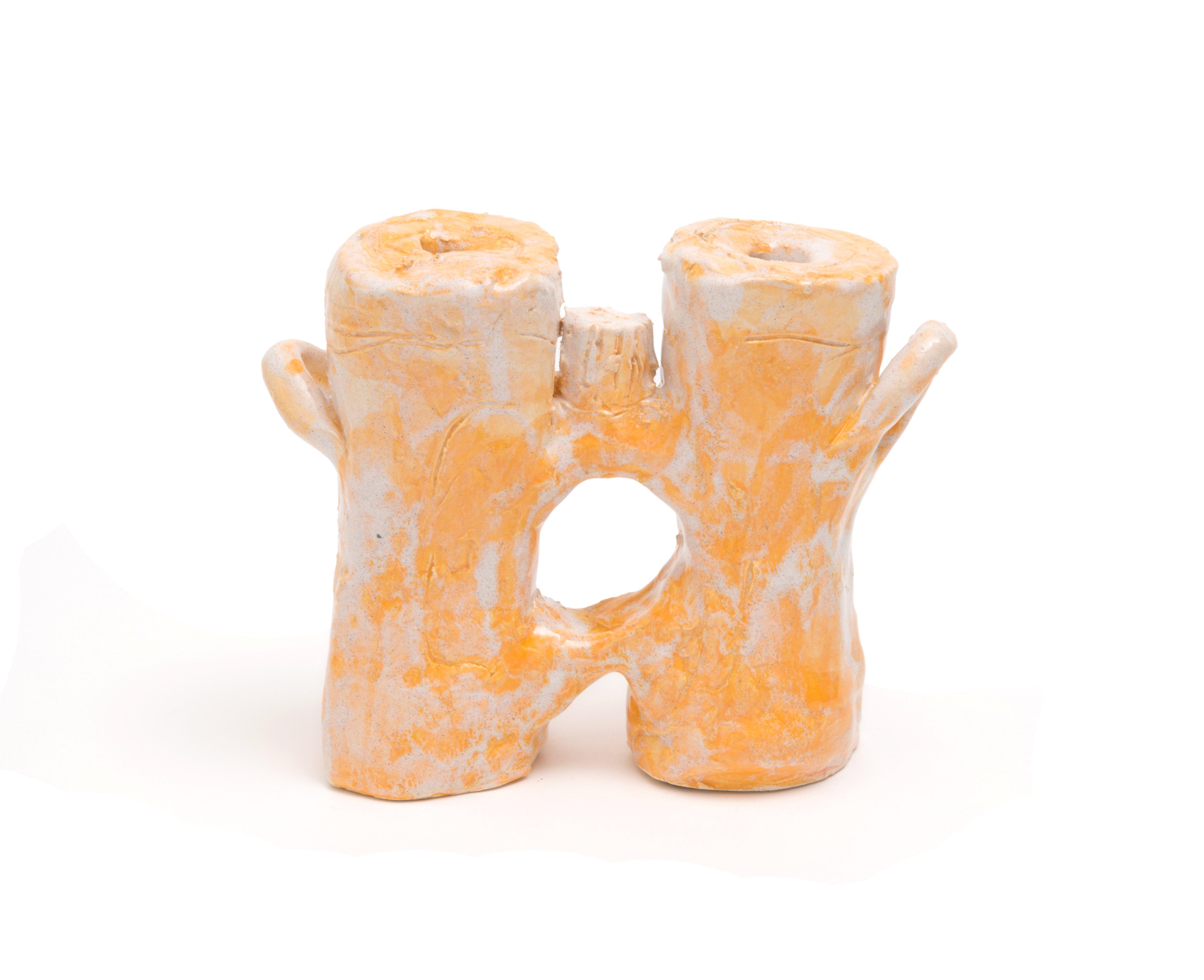 Salon 94 Freemans will stage Semiotic Terrain: Art from Australia and New Zealand, featuring the work of three Aboriginal artists: Yukultji Napangati, Warlimpirrnga Tjapaltjarri and Mantua Nangala as well as Julian Martin and Alan Constable, two artists affiliated with Arts Project Australia, a space for artists with intellectual disabilities. Also featured are the drawings of Susan Te Kahurangi King, who first made a splash on the art world stage in 2014 after her solo exhibition in New York.

Shin Gallery will be hosting three exhibitions across its newly expanded space: Keep Your Lamps Trimmed and Burning, a showcase of African-American artists from the Deep South.  Curated by Scott Ogden of SHRINE, the presentation will include works by Thornton Dial, Mary T. Smith, Ronald Lockett, Bill Traylor, and the Gee’s Bend Quiltmakers. The solo exhibition, The Realm of Minnie Evans, will offer works from The Daniel Collection, and Small World, a group show of small-scale works by self-taught artists will include works by Madge Gill, John Byam, Melvin Way, Morton Bartlett, and James Castle.

At Hirschl & Adler, To Be Human: The Figure in Self-Taught Art will feature works by some of the most renowned and beloved artists in the field from Henry Darger and Eugene Von Bruenchenhein to James Edward Deeds and Bill Traylor.

Andrew Edlin Gallery will offer Figure Out: Abstraction in Self-Taught Art, a showcase of works from artists rebelling against the notion that outsider artists are only storytellers. Among this group are Dan Miller, Eugene Andolsek, Hiroyuki Doi, Eugene Von Bruenchenhein, Melvin Edward Nelson, and Tom Bronk among many others.

The OAF Curated Space, a signature event of the fair, this year will be held at the famed Electric Lady Studios (founded by Jimi Hendrix in 1969). The exhibition, Daniel Johnston: Psychedelic Drawings, will showcase the drawings of the late singer-songwriter curated by renowned cartoonist Gary Panter. 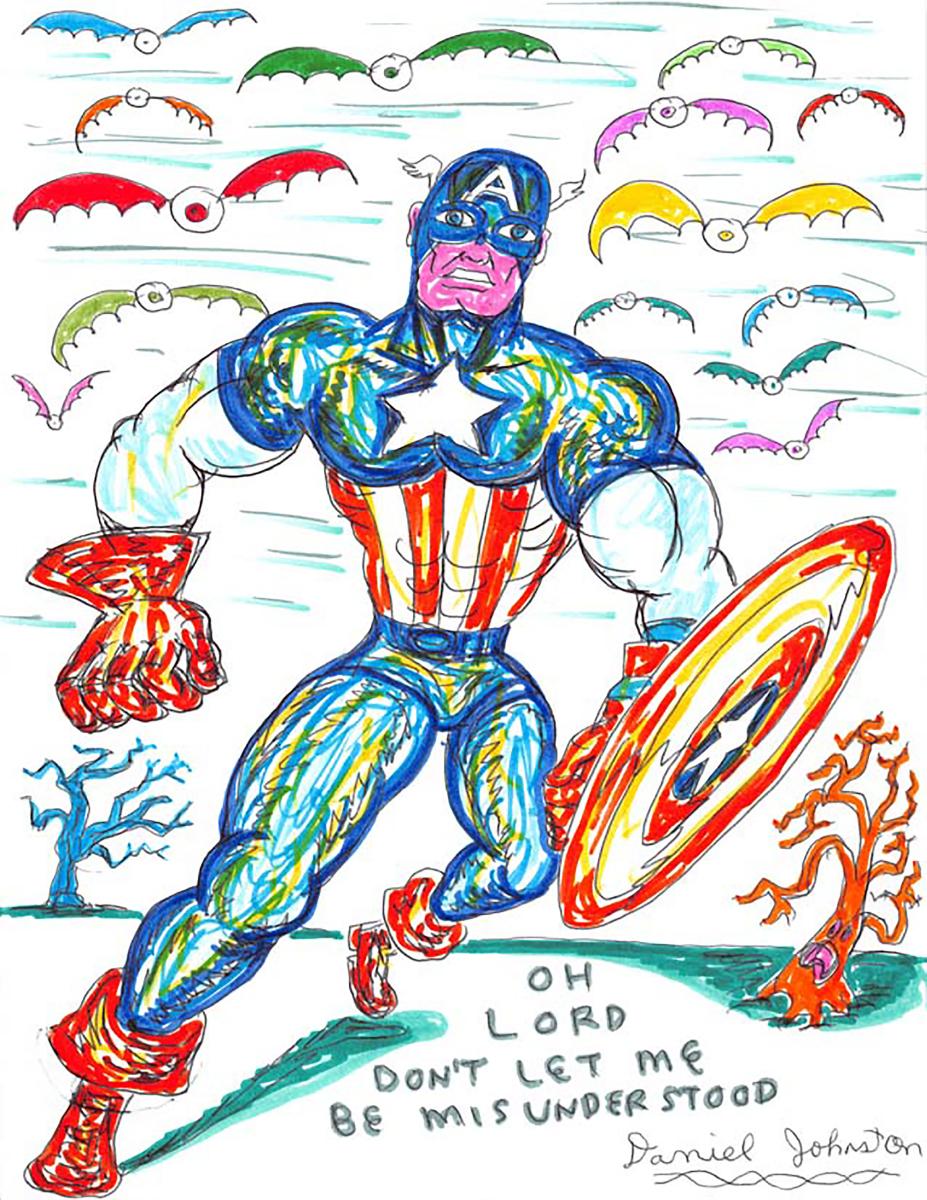 Courtesy of The Daniel Johnston Trust

Some of the established dealers participating in the virtual component of the fair include Creative Growth Art Center from Oakland, Fleisher Ollman Gallery from Philadelphia, Yukiko Koide Presents from Tokyo, American Primitive from New York, Carl Hammer from Chicago, and Ricco/Maresca Gallery, which will show works by Martin Ramirez and George Widener. Phyllis Stigliano will stage a show of paintings by artist Mary Whitfield known for her watercolor scenes of slavery in the American South. The Pardee Collection of Iowa City will present paintings by sharecropper Emitte Hych.

Among the first-time exhibitors are Art Code Space of Miami who will showcase Cuban artists including the large-scale cut-out silhouettes of gender-fluid bodybuilders by Misleidys Castillo.

Also of note, Marion Scott of Canada will show Françoise Oklaga and Outsider Inn of Tehran will show a series of tapestries by Asbahi Sisi (known as CC).

This isn’t the first time the fair has deployed a hybrid model. With the Paris iteration of his fair, which took place in October, Edlin held both an online viewing room featuring thirty-nine galleries paired with an in-person exhibition, curated by Alison Gingeras. It was held at partner site Hotel Drouot (which normally would hold the OAF panel discussion). 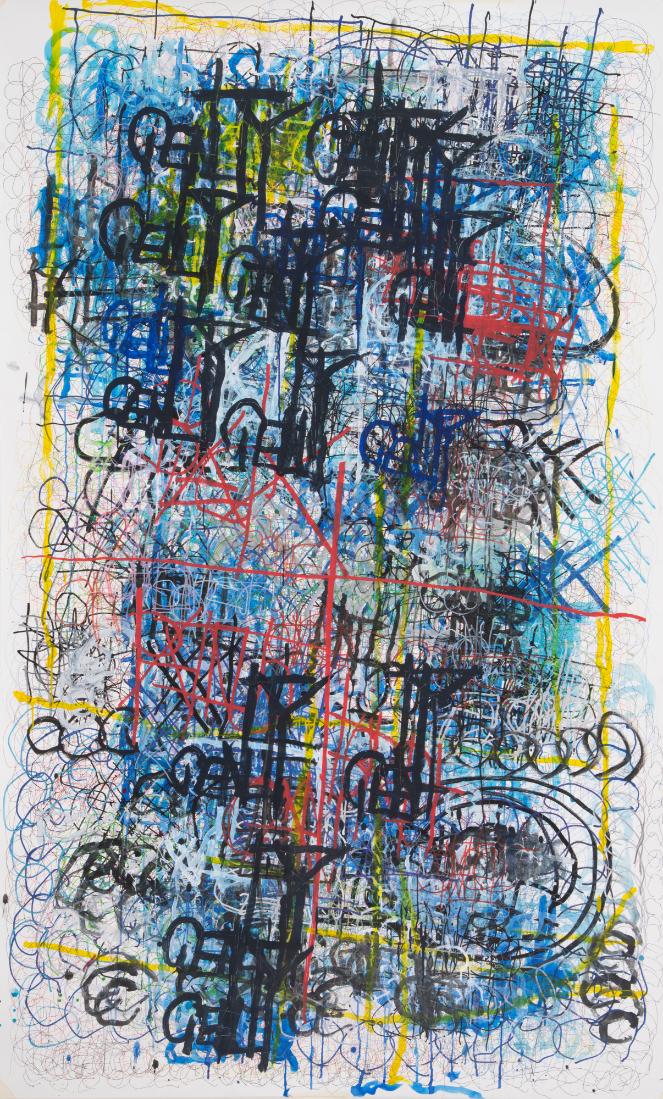 Dan Miller, Untitled, 2018. Acrylic and ink on paper. 98 x 59 in. On view in Figure Out: Abstraction in Self-Taught Art at Andrew Edlin Gallery.

With regard to the virtual fair, Edlin said the results were all over the map. There were “some who knocked it out of the park and some who didn’t sell anything.” But there was also limited overhead—ten percent of what it normally would have been—so even those who didn’t sell “thought of it as advertising.”

The gallery has done well, and has brought back most of its staff, but has still struggled. While his gallery closed on March 13 during a Karla Knight solo show, and he had to furlough his staff for a few months, he hired everyone back (with the exception of one person and that was unrelated to COVID).

“Under the dire circumstances, we’ve done really well through all this,” said Edlin noting that that needed to be taken with a grain of salt. “The easy answer is the pandemic exemplified the deep divide in America. Noting that the gallery’s clients still have disposable income, they were still able to collect and buy art. He was “pleasantly surprised” that every deal that was consummated before and during the gallery’s closure was followed through on. “Almost no one ducked out.”

One positive outcome of the pandemic on galleries is the rise in online sales. Whereas online sales made up 10 percent of total sales in 2019, according to the Art Basel and UBS report 'The Impact of COVID-19 on the Gallery Sector', a 2020 mid-year survey written by Dr. Clare McAndrew, Founder of Arts Economics, by the end of the first half of 2020, that percentage rose to 37 percent of all sales.

Like many other galleries, Edlin turned to online viewing rooms. In May, OAF launched Art Brut Global, a three-pronged virtual exhibition that showcased work from galleries and dealers in its community including American Primitive, Henry Boxer, Cavin-Morris, Carl Hammer, Yukiko Koide, Creative Growth J.-P. Ritsch-Fisch, galerie du Marché, and Les Yeux fertiles). The stint, which ended in August, had 5,000 registered visitors to the website. 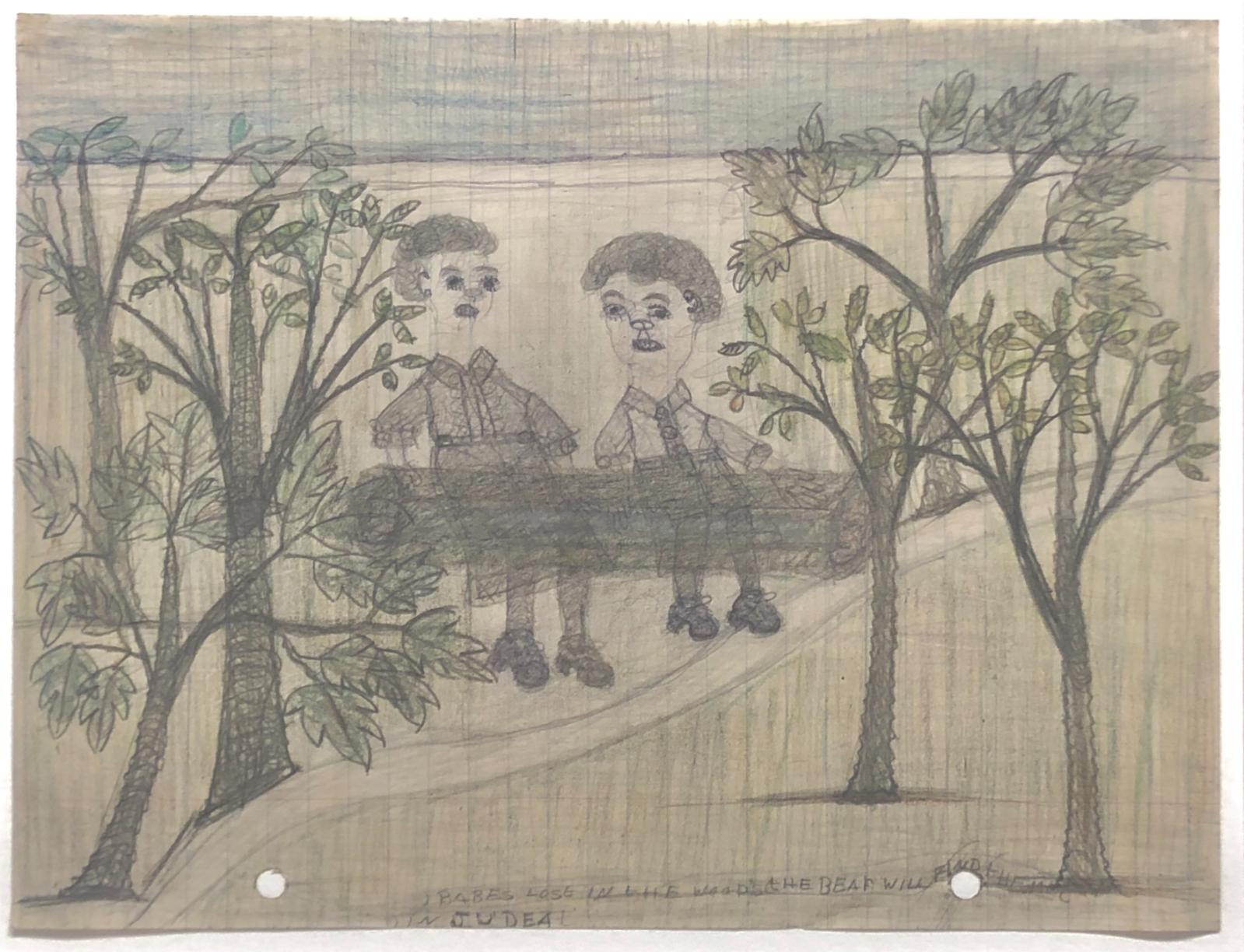 Pearl Blauvelt, Untitled (Babes Lost in the Woods the Bear Will Find Them in Judea), c. 1940s. Graphite on paper. 8.5 x 11 in. On view in To Be Human: The Figure in Self-Taught Art at Hirschl & Adler.

"I think the digital component will matter now, even after COVID-19,” said Nikki Iacovella, the fair’s director at the time of the Paris fair. “It won't replace physical art fairs but it will be a building block in the future.”

Also in May, the gallery held the online exhibition Terence Koh: Diary, of drawings, video, and poetry. He said the show, which saw existing and new clients acquiring works, was a success. “We sold quite a number of them,” said Edlin. But he notes that people have become fatigued by the online experience.

Edlin also participated in Art Basel OVR and had mixed feelings about it. “I don’t think as many people saw it as I might have hoped,” he said. Though his booth got 1,200 visits, 400 of which were from “VIPs,” business wasn’t booming. Unlike in-person fairs, he couldn’t “draw a direct line in terms of the expense and what you got out of it.” But he didn’t mind. He said he thought of it like advertising. It was important to be there and to get the exposure. “I wanted the Art Basel audience to see our work.”

Online or in-person, Edlin realizes his fair, which he acquired in 2012, offers something that no other fairs offer with the same breadth and variety. “We’re the only player in this space,” he said. “So people recognize how important this fair is to their business.” How will that translate to the next fair in the current atmosphere?

“I’ve tried to instill a more communal feeling,” he noted about the fair. “But any business that depends on people congregating in one space is taking it on the chin.”