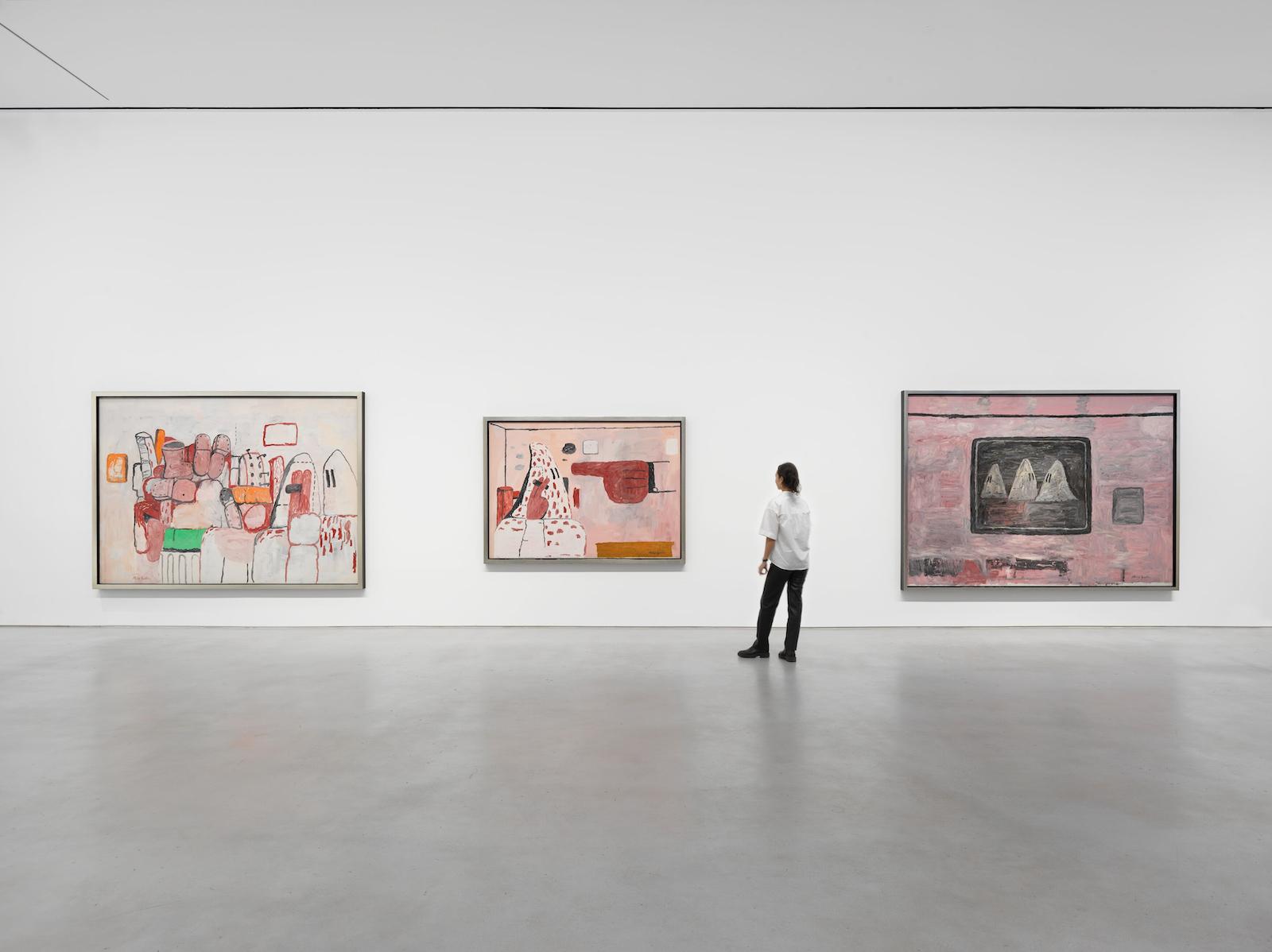 A traveling retrospective was delayed because of the COVID-19 pandemic. Then, the four museums involved, the Museum of Fine Arts in Boston, The Museum of Fine Art in Houston, The National Gallery of Art in Washington, D.C., and the Tate Modern in Britain decided to postpone it to 2022-23. They did so due to concerns that his paintings of figures in Ku Klux Klan hoods would send the wrong message to audiences and provoke accusations of racism. The decision sparked backlash from artists and critics alike, citing censorship and a misunderstanding of how Guston was actually interrogating, not promoting racism in these works.

The museums spoke of taking time for contextualization and more public education. Critics of the decision, including fellow artists, said the delay was evidence of a “longstanding failure to have educated, integrated, and prepared themselves to meet the challenge of the renewed pressure for racial justice that has developed over the past five years”

No matter which side you’re on, those who don’t want to wait can see a less sweeping, but tightly edited and highly focused view of the painter in “Philip Guston, 1969-1979” now on view at Hauser & Wirth in New York through October 30th. Where the postponed exhibition was a retrospective, focusing on the broad scope of Guston’s career—from figuration and social realism to abstraction and back to figuration again—this exhibit focuses on his late career, and goes straight to the controversial point. 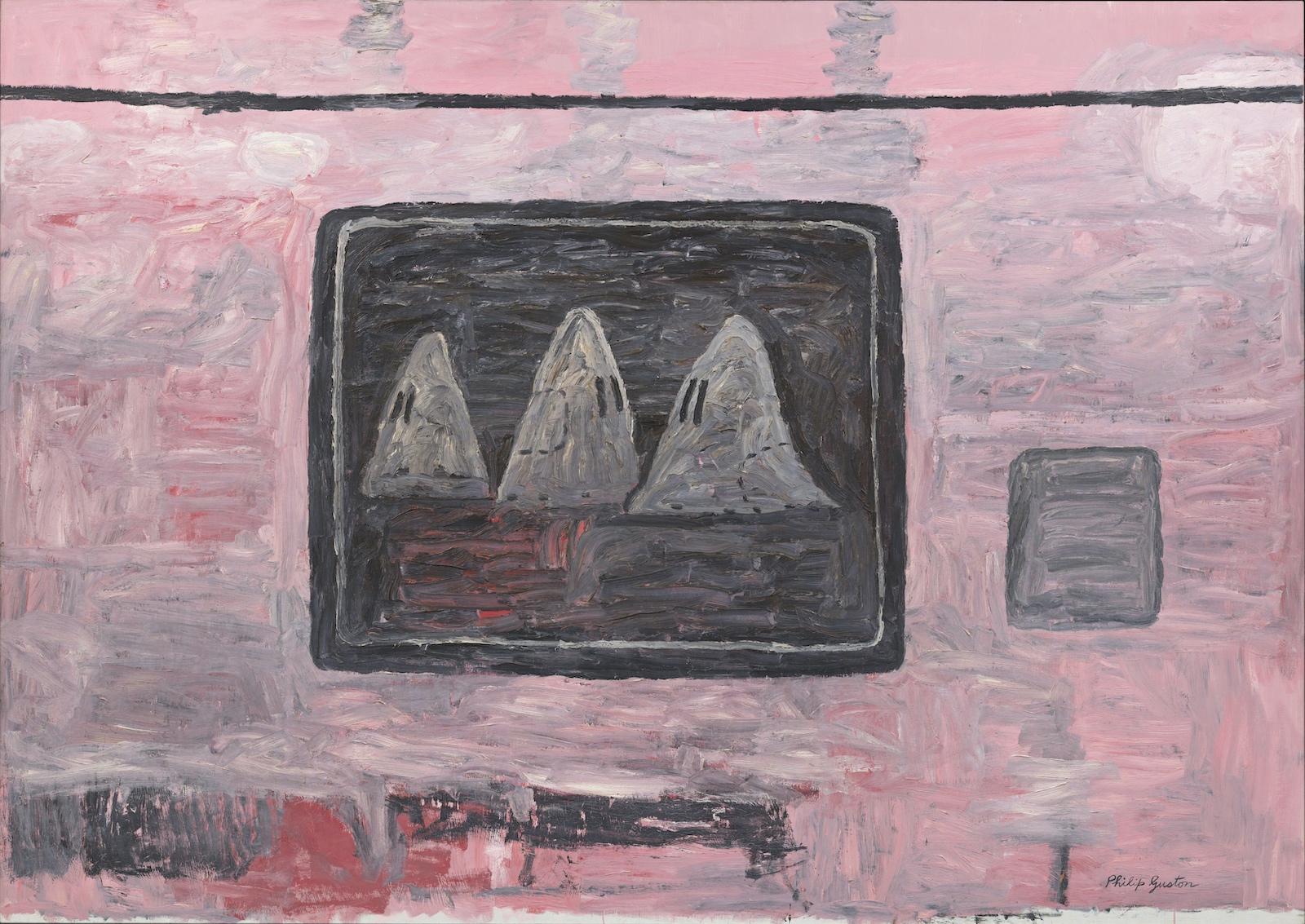 That includes the paintings with Klan figures, six of which take up the entirety of the gallery’s front room. Visitors are greeted as soon as they walk in with Blackboard (1969), painted on what looks like a classroom blackboard featuring three hooded figures with black vertical lines for eyes, two looking at each other in an confrontational pose, another looking away, as if avoiding the conflict. The pink background surrounding the board is jarring, a hint of pastel lightness contrasting with the evil in the center.

The argument turns into a potential fight in Scared Stiff (1970), in which a bigger hood with the same eyes, a cigarette between its fingers, faces a giant pink finger that looks like a boxing glove poking out from the wall.The finger feels like the embodiment of an accusation, one the subject might duck, but can’t avoid. 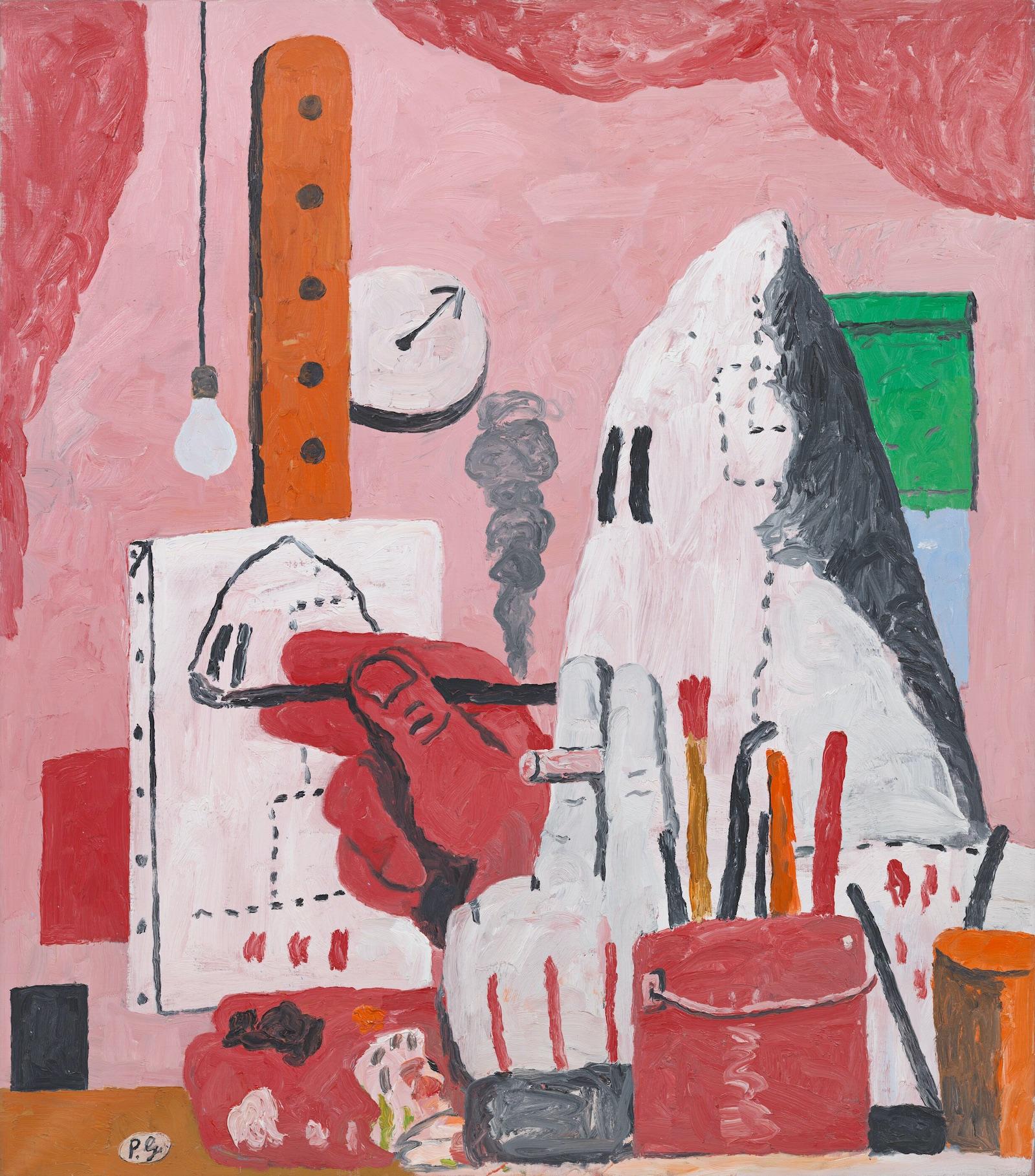 In The Studio (1969), the confrontation is not with others, but the self. The subject is a hood, painting a self portrait, making the easel a mirror reflecting the racism, the hatred, the little bit of Klan-like tendencies in all of us. Less effective is Riding Around (1969), in which the hoods are smoking and riding in a car together; in this case the figures feel almost cartoon-like scrunched together in the tiny car, a city background behind them.

The paintings in the back room don’t have any Klan imagery in them, but that doesn’t make them any less uncomfortable. The colors are generally shades of pinks, reds, and blues. The themes are time, decay, and the dark side of human nature.

These paintings feature motifs common in his later work: shoes, particularly soles and heels strewn in unruly piles, disembodied limbs, bugs, and a sense of claustrophobia. This includes the shoes in Entrance (1979), seen from behind a door, mostly red and black, which look like they’re about to become an avalanche of footwear (or maybe other things hidden away in a closet), just barely kept in check by the door. 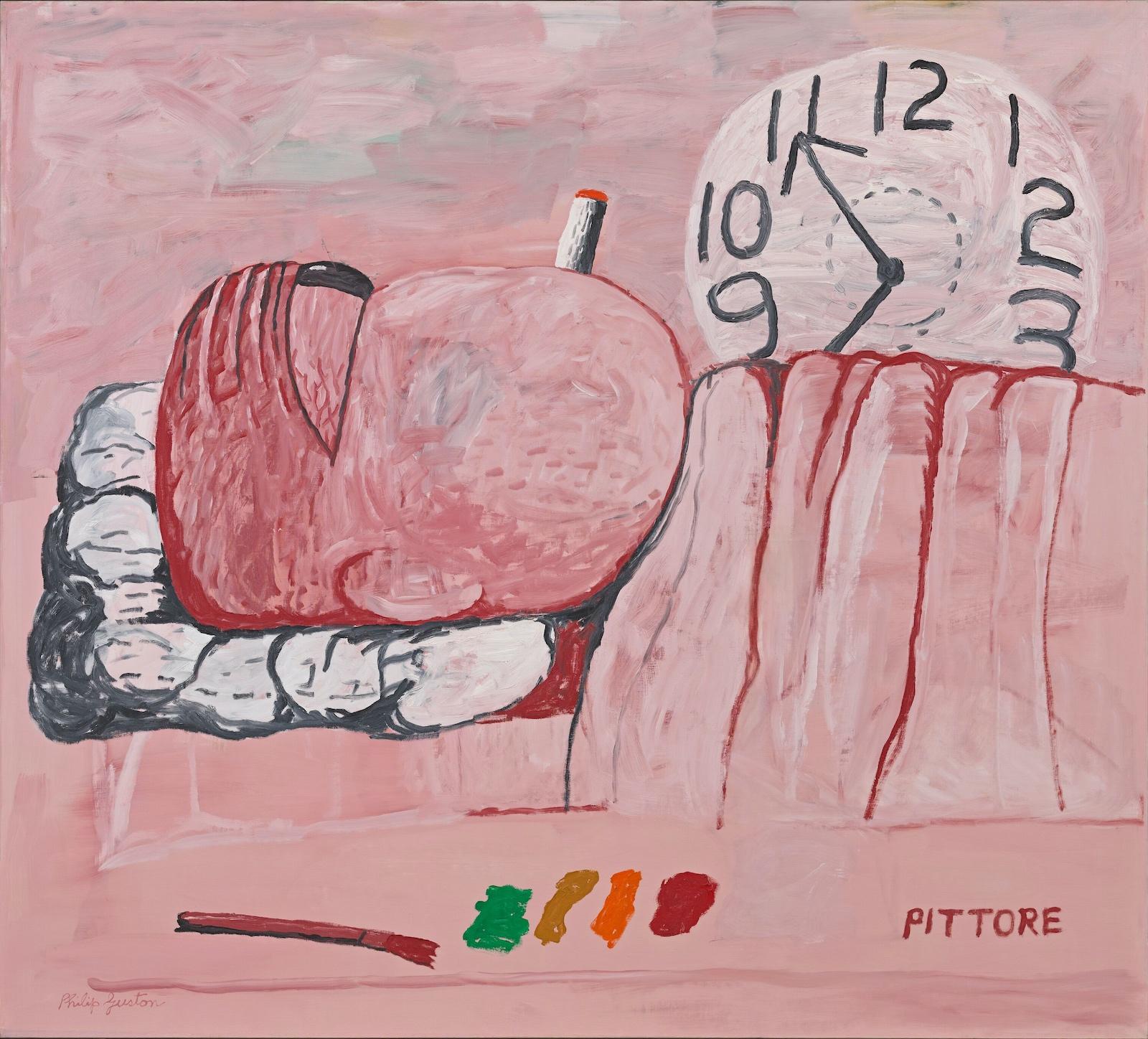 In Sleeping (1977), the subject is wrapped tightly in a red blanket, curled in on himself, shoes and hair sticking out from the bottom and the top. It looks like he passed out in despair, too tired to change at the moment. Pittore (1973) continues the trapped in bed and trapped by time feeling. The subject, cigarette in mouth, is also tightly sealed in a blanket, pushed up against a clock, as if time is literally pressing down on him. There’s no relief from heavy feelings in this show. The light fixture in Solitary II (1978), should be a source of hope, or at least some brief illumination. It’s black triangular form with a bit of white poking out however, looks a bit like the Grim Reaper.

As Guston’s daughter Musa Mayer pointed out in an exhibition talk, his later work has always courted controversy. In the 1970s, his return to figuration was considered a traitor to abstract expressionism. Now, it’s either viewed as outwardly racist, or else undesirable because it forces white viewers to address our culpability in promoting racism. This exhibit is full of images that are hard to look at. Whether he’s grappling with aging, racism, or run of the mill nightmares, Guston dares us to look. As this exhibit shows, it’s important that we take him up on it.