Sotheby’s to Offer Most Important Bouguereau Painting Ever at Auction 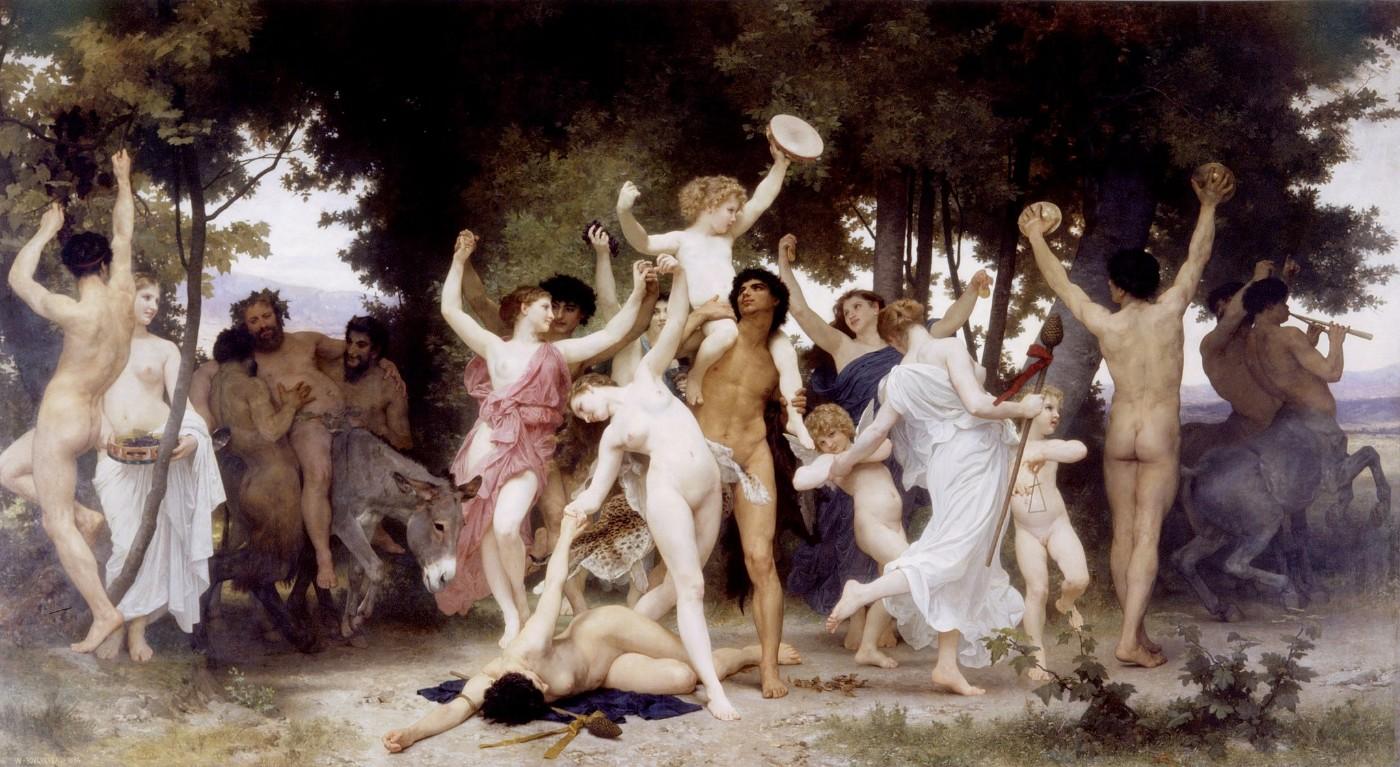 Equally impressive in both scale and technical artistry, the monumental canvas stands an astounding 20 feet in length and 11 feet in height. The work has hung in Bouguereau's studio in Paris since it was completed in 1884—the culmination of two years of work—and has previously left only three times in its 135-year history: when initially presented at the Salon in 1884, followed by exhibitions in London and Antwerp through 1885, for the Paris Exposition Universelle in 1889, and as part of a retrospective touring the Musée du Petit-Palais in Paris, the Montreal Museum of Fine Arts, and the Wadsworth Atheneum in Hartford in 1984-85. 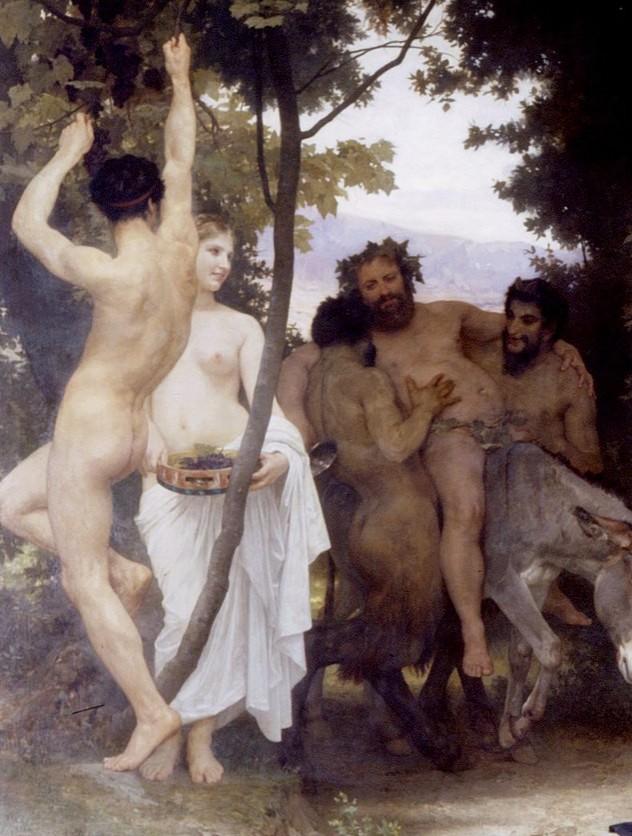 On offer this spring by the direct descendants of the artist, La Jeunesse de Bacchus will carry an estimate of $25/35 million in the Impressionist & Modern Art Evening Sale. Its appearance in this sale marks the first time that a work by Bouguereau will be offered in Sotheby's marquee evening auctions.

The work will be on be view alongside Sotheby’s Asia Week exhibitions from 14 March - 24 March, and again for Sotheby’s Impressionist & Modern Art exhibitions beginning 3 May in the newly expanded and reimagined New York galleries.

Benjamin Doller, Chairman of Sotheby’s Americas, said: “I remember so clearly when I first saw La Jeunesse de Bacchus, at The Wadsworth Atheneum in 1985 that I was struck by the by the size of this great painting, but I was so enamored with the life-like quality of the figures. Technically brilliant, each figure seemed to have its own unique personality. Seeing the painting in Bouguereau's studio, hanging on the very wall where he painted it was an emotional experience for me. I was attracted once again by the magnetic presence of the central group of dancing figures. Indeed, for a few seconds, I felt they were dancing “in front” of the picture, as if the painting were three-dimensional. When you see the true majestic scale and technical brilliance of this masterpiece, you realize this is one of the greatest pictures painted in the 19th century. Its appearance on the market, something I would have only dreamed of back in 1985, will present a truly singular opportunity to acquire a work that is the last and greatest of its kind.”

Pascale Pavageau, Head of Sotheby’s 19th Century Paintings & Drawings Department, Paris, commented: “The unveiling of this icon invites a dynamic opportunity to consider the past, present and future of this composition–inspired by Classical myth and almost mythical itself. A tour de force of line and color on the grandest scale, every element compels immediate appreciation and close examination. Encapsulating all the brilliant painterly defiance that characterizes Bouguereau’s work, La Jeunesse de Bacchus is the most important painting by the artist ever to come to auction.” 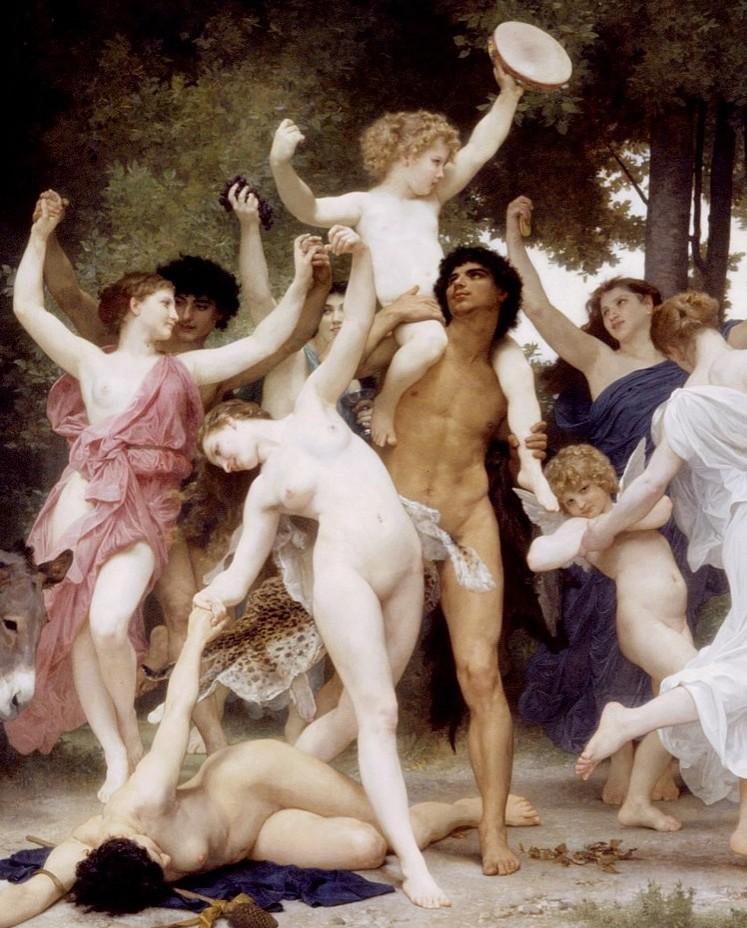 La Jeunesse de Bacchus (Youth of Bacchus) is as rare as it is spectacular; a monumental canvas that is the most ambitious within Bouguereau’s oeuvre. Painted over the course of three years, La Jeunesse de Bacchus captivates the viewer with its striking and magnetic wall power. With influences taken from the Greco-Roman period, classical 17th-century French painting and sculpture, and the work of his contemporaries, the painting records the training, talent and vision of one of art history’s greatest masters.

At the age of 20, in 1846, William-Adolphe Bouguereau left his home in Bordeaux to pursue a formal education in the Academic tradition at the École des Beaux-Arts in Paris, which emphasized scenes from history, literature, the Bible, and classical mythology. In addition to rigorous study of drawing and painting, he studied historical costume and attended dissections in order to gain a deeper knowledge of the body and anatomy. In 1850, he won the coveted Prix de Rome, affording him three years at the Villa Medici and exposure to the work of the Renaissance masters, including Raphael, Titian and Michelangelo, as well as Greek and Roman antiquities. The influence of these masters is evident throughout Bouguereau's career, and particularly so in his Neoclassical Salon paintings of the 1850s and 1860s, as well as the present work.

Between 1878 and 1884, Bouguereau produced approximately 50 paintings, including 14 works over three meters high, which were exhibited at the Salon. It was during this six-year period of unprecedented activity that Bouguereau started to paint La Jeunesse de Bacchus–though the first iteration of the composition appear in wall decorations 30 years before the final work was completed. When conceived, Bouguereau was enjoying international recognition and accolades, appointed to Knight of the Order of Leopold by the King of Belgium in 1880, elected president of the Paintings section at the Salon in 1881, teaching at the Académie Julian, and elected president of the Society of Painters, Sculptors, Architects and Engravers in 1883.

When La Jeunesse de Bacchus was first presented in 1884 at the Paris Salon, it was indisputably the most important and masterly example of French Academic painting anywhere in the world, and established Bouguereau as the most celebrated and successful French Academic painter of the 19th century. Its size did not overwhelm audiences, but rather engaged visitors to come closer to the canvas, first to admire the artist’s technique, which gave the painting an impressive materiality, and next, because they identified so strongly with the life-size subjects within the massive work. An immediate connection was made between the observer and those who were a part of Bouguereau’s fictional world. The man carrying Bacchus, for example, stands 5’7’’, the same height as that of the average man at the time. The figure of the fallen bacchante in the foreground of La Jeunesse de Bacchus is so close to the edge of the canvas that she seems to be exiting the space within the frame and entering the room of the spectator, collapsing the division between art and life. 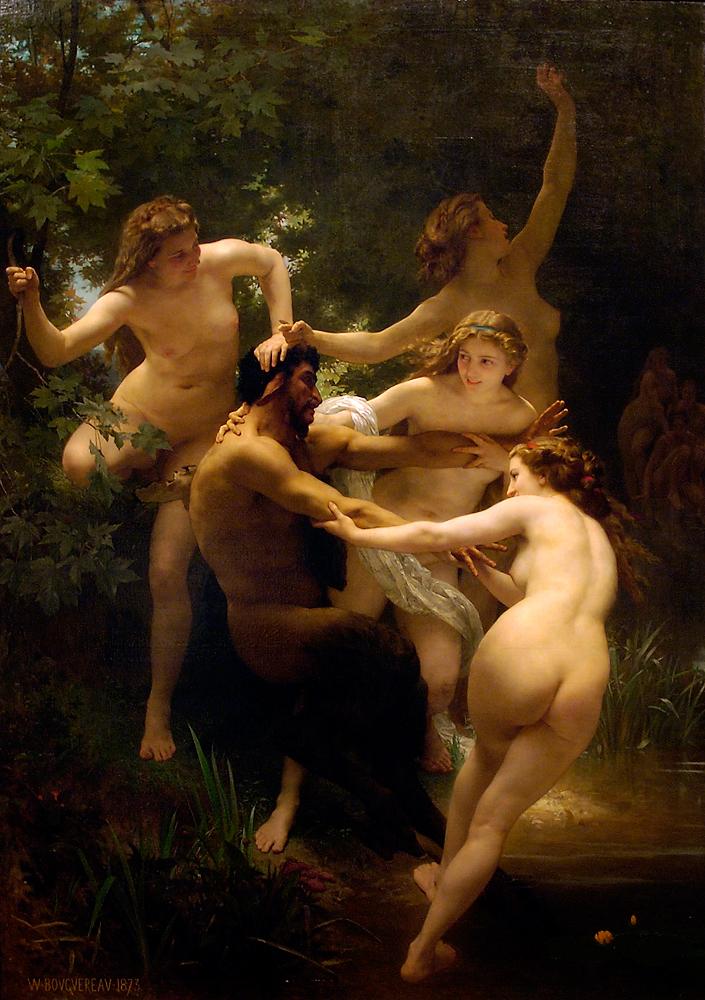 Arranged as a frieze, with 11 life-sized female and male figures parading across the composition, Bouguereau’s extraordinary skill of conveying gesture and movement is on full display. In the shadow on the left, two satyrs try to support Silenus, who teeters precariously atop a donkey. In the shadow on the right, two centaurs are dancing to the sound of a double flute. Their animated movements provide a distant echo of what takes place in the center of the composition, where a group of dancers form a circle around the figure who carries the child Bacchus on his shoulders.

Classical subjects and Greek myths provided Bouguereau with inspiration throughout his career. The resulting narrative paintings were accessible to contemporary audiences and earned him great acclaim as his submissions to the Paris Salon, including compositions such as Nymphs et Satyre (1873, Sterling and Francine Clark Institute, Williamstown Massachusetts), Flore et Zéphyre (1875, Musée de Mulhouse, France), and his Salon submission of 1885, Biblis (1884, Salarjung Museum, Hyderabad, India). The classical subject also provided a veil under which Bouguereau could present the nude, a strategy that many 19th century Academic artists employed.

With major works held in international museum collections including Musée d'Orsay, Paris; The Metropolitan Museum of Art, New York; and the Hermitage Museum, Saint Petersburg; and a new show currently on view the at the Milwaukee Art Museum (Bouguereau in America), the appearance of La Jeunesse de Bacchus at auction offers an unprecedented opportunity to acquire a masterpiece of 19th century European Art.