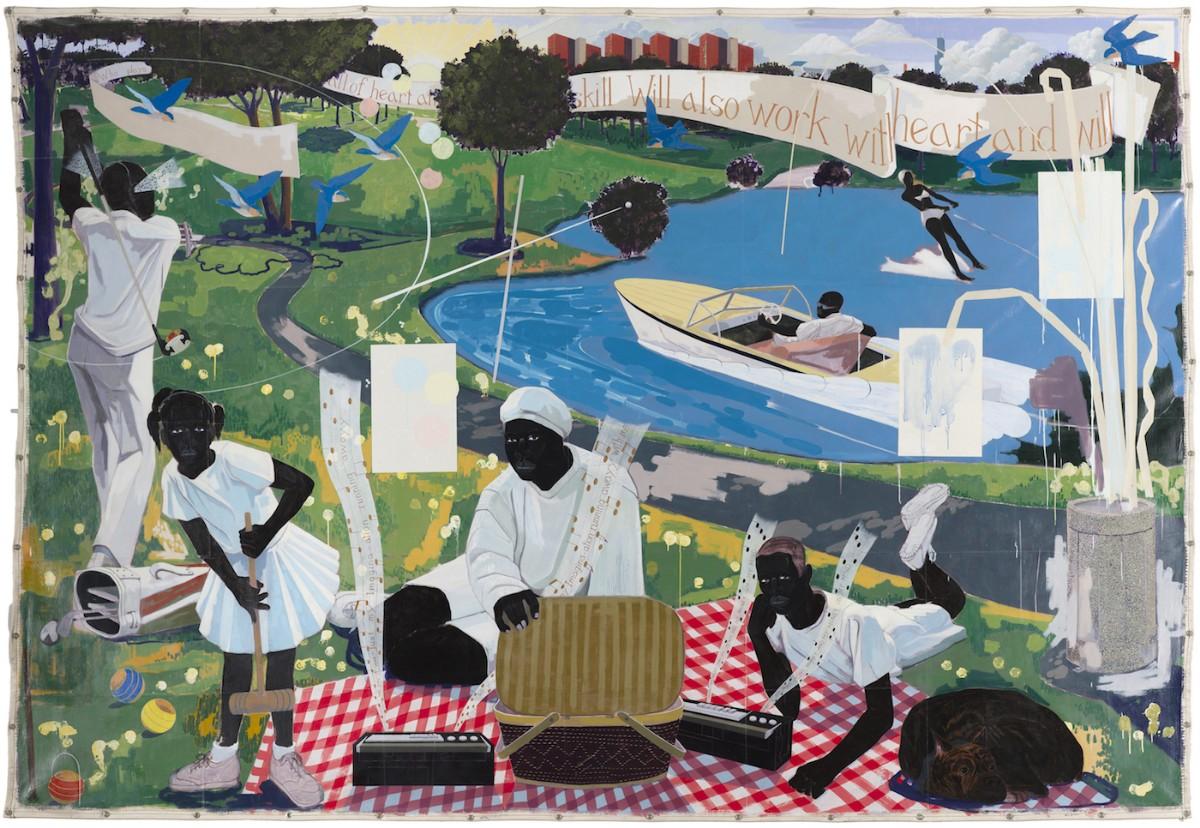 Kerry James Marshall, “Past Times,” 1997, Acrylic and collage on unstretched canvas, 108 by 157 inches, Property from the Metropolitan Pier and Exposition

A Major Highlight of His Mid-Career Survey ‘Mastry’, Exhibited in Chicago, New York & Los Angeles — The Culmination of His Celebrated Garden Project Paintings —

NEW YORK, 25 April 2018 – Sotheby’s is honored to announce Kerry James Marshall’s "Past Times" as a highlight of our auction of Contemporary Art this May. The most significant work by the renowned artist to ever come to market, the painting is a tour de force that captures Marshall’s extraordinary vision and technical command while serving as a harbinger of his impact on the arc of art history. A centerpiece of the highly acclaimed 2016/7 mid-career survey ‘Kerry James Marshall: Mastry’ at the Museum of Contemporary Art, Chicago, The Metropolitan Museum of Art, New York and the Museum of Contemporary Art, Los Angeles, as well as a highlight of the 1997 Whitney Biennial where it first debuted, this spectacular painting will be a cornerstone of our Contemporary Art Evening Auction on 16 May. Past Times carries a pre-sale estimate of $8/12 million and is poised to set a new world auction record for the artist.

"Past Times" is being offered for sale by the Metropolitan Pier and Exposition Authority in Chicago, Illinois – a municipal corporation created by the Illinois General Assembly, and owner of McCormick Place, the largest convention center in North America. "Past Times" was acquired from the Koplin Gallery in Los Angeles in 1997 to hang in the South Building of the McCormick Square campus, which was completed in 1996.

Saara Pritchard, Sotheby’s Senior Specialist in Contemporary Art, remarked: “This May, we are privileged to be entrusted with the sale of 'Past Times,' an undisputable masterpiece by Kerry James Marshall that both defines and transcends our time. Artistically complex, politically engaged and career-defining, it is an awe-inspiring work of art; standing in front of this astonishing painting, one uncovers layers of meaning and discovery in each and every detail of this richly-laden work. A highly anticipated feature of our Contemporary Art Evening Auction, 'Past Times' joins a cast of exceptional works by living artists, including those donated for Creating Space: Artists for The Studio Museum in Harlem.”

One of America’s greatest living painters, Kerry James Marshall is an artist who is consciously pushing the constraints of art history, subsequently redefining its past, present and future. With "Past Times," he confidently reclaims the presence of figures of African descent in the canon of Western art history. In this immense 108-by-157-inch canvas, Marshall expands upon his foundational series, the 1994-5 Garden Project paintings, first shown in Documenta X in Kassel, 1997. Comprised of five works of art, this group of paintings depicts the daily routines of black residents in romanticized versions of major housing projects in Los Angeles and Chicago, including the Nickerson Gardens 3 housing project, the artist’s childhood home. By calling attention to the gap between the idealized notion of community and the harsh reality of low-income housing, as well as the disconnect between the dire living situations imagined by those on the outside versus the hope retained by those in the inside, Marshall highlights the multi-layered incongruences of these urban settings. Widely regarded as the artist’s first, triumphant artistic breakthrough, the majority of the Garden Project paintings are held in the collections of such museums as the Denver Art Museum, the Art Institute of Chicago, and the Crystal Bridges Museum of American Art, amongst others.

Following completion of these paintings in 1995, Marshall created three final works of immense size and complexity, the last of which is the present work from 1997. "Past Times" reimagines art history, taking as his point of departure Western masterworks of narrative painting such as Giorgione’s "The Tempest," Édouard Manet’s "Le Déjeuner sur l’herbe" and Georges Seurat’s "A Sunday on La Grande Jatte." The final product is a brilliant reinterpretation of pastoral scenes in which aristocrats frolicking in Europe are replaced with black figures relaxing on the shores of Lake Michigan in Chicago: sailboats, crew shells and parasols are substituted with motorboats, water skiers and boom boxes: a summer breeze is swept aside by lyrics from Motown and Snoop Dogg. Boldly re-invigorating the grand tradition of Western painting in the service of those made invisible within the same tradition, Marshall’s virtuosic mastery of the grand style demands that the absence of the black artist and subject be not only recognized, but immediately and irrevocably rectified.

This enormous feat is indisputably linked to Kerry James Marshall’s upbringing in Birmingham, Alabama, South Central and Watts, California, and Chicago, Illinois. As an adolescent and a young adult, Marshall wandered the halls of Los Angeles museums and devoured books in his neighborhood library; through this education, he became acutely aware of the artistic language of the Dutch masters, the French Impressionists and the American Abstract Expressionists, but also the absolute absence of people of African descent in any of these works. This voracious appetite for art history informed Marshall’s singular artistic goal, appropriating the grand artistic gestures of historical movements in order to rectify the glaring absence of the black figure within Western art history.

SOTHEBY’S PRESENTS: FEARLESS NOW
Throughout our marquee May auctions of Impressionist & Modern and Contemporary Art in New York, Sotheby’s will celebrate brave artistic voices across time – from the pioneering Impressionists working outside of the Paris Salon in the 19th century, to groundbreaking artists, collectors and patrons who are making their own rules today. Follow us throughout the spring for video, articles and news from our original series Fearless Now.