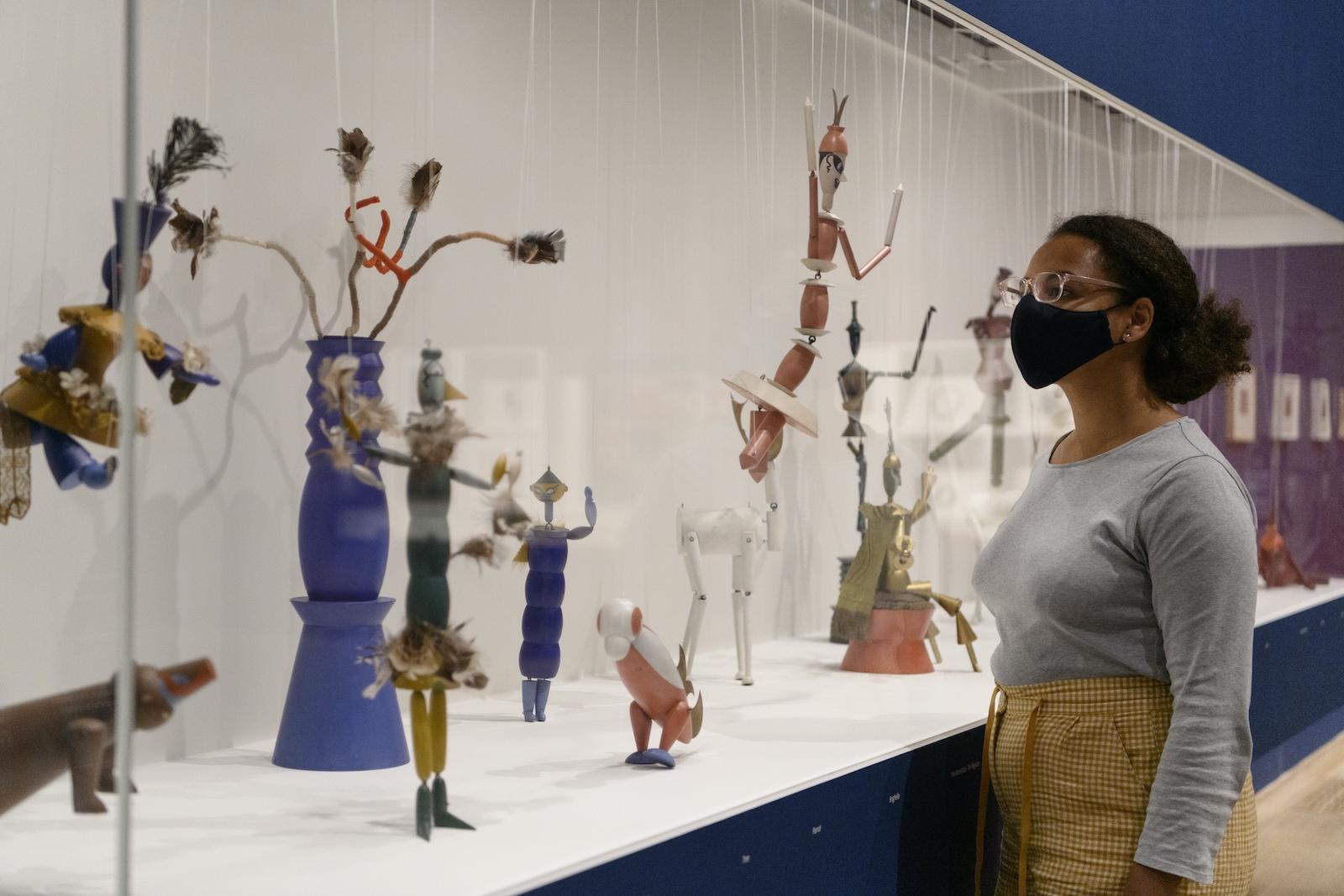 One of the most innovative artists and designers of the twentieth-century avant-garde, Sophie Taeuber-Arp (1889-1943) challenged the borders between abstract art, design and craft. Tate Modern’s major exhibition is the first in the UK to trace Taeuber-Arp’s accomplished career as a painter, architect, teacher, writer, and designer of textiles, marionettes and interiors. Bringing together over 200 objects from collections across Europe and America, the exhibition shows how she blazed a new path for the development of abstraction.

After studying fine and applied arts in Munich, Sophie Taeuber-Arp began her career in Zurich, an international hub for the avant-garde during the First World War. She took classes at Rudolf von Laban’s influential school of dance, and met her lifelong partner, artist and poet Jean (Hans) Arp. She became a successful textile practitioner and teacher while simultaneously experimenting with non-figurative art. Responding to the grid structure of textiles and the bold colours of vernacular culture, she created vivid works on paper and embroideries. Her work stood apart from the abstract art of her contemporaries by completely bypassing deconstruction of the figurative form. A selection of these works are shown side by side with decorative artworks including beaded bags, jewellery, rugs, pillowcases and tapestries to reflect the fluid way in which Taeuber-Arp worked concurrently across disciplines.

By the end of the war, Taeuber-Arp had become active within Zurich dada, the short-lived but influential artistic movement which sought to integrate art and life, embracing abstraction and absurdity. Her turned-wood ‘Dada Heads’ are some of the most iconic artworks of the era. She also embraced the performative side of dada, dancing at the legendary Cabaret Voltaire and creating marionettes for the avant-garde interpretation of the play ‘King Stag’. All of the original marionettes are on display at Tate Modern in a standout room of the exhibition.

In the 1920s Taeuber-Arp embarked on experimentation with architecture and interior design for private houses and public buildings. The exhibition includes designs and furniture from these projects, such as the commission for the Aubette, a modernist entertainment complex in Strasbourg, created in collaboration with Arp and Theo Van Doesburg. The commercial success of her architectural practice enabled Taeuber-Arp to design her own studio-house near Paris, which would become a focal point for international intellectuals such as Tristan Tzara, Max Ernst, and James Joyce. Taeuber-Arp’s involvement in the Parisian art scene prompted a return to painting in the late 1920s. She experimented with primary colors and abstract forms, going on to develop a series of compositions of rectangles and circles in the 1930s. Unconfined by the canvas, she also translated these ideas into a series of painted, turned-wood reliefs.

Fleeing Paris at the outbreak of the Second World War, Taeuber-Arp turned to drawing as one of a few means of artistic expression available to a displaced artist. The final room of the exhibition brings together the works she made while on the move and in exile, created before her tragic accidental death in 1943 aged fifty-three. These works embody her lifelong interest in abstraction, her constant development of new ideas, and her ability to embrace new materials and methods in a way that remains hugely influential for artists today.