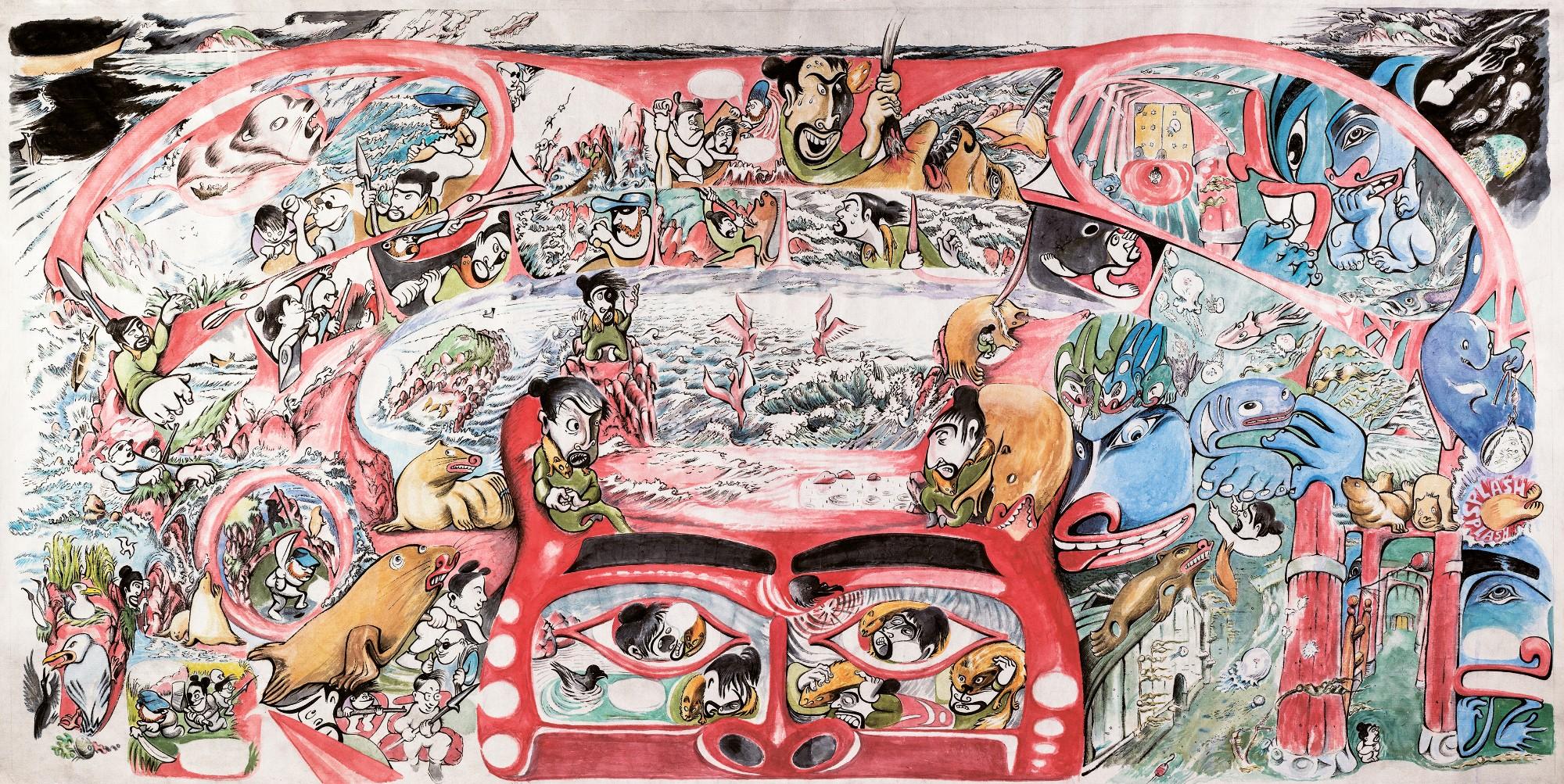 Created with watercolor and ink on handmade mulberry paper from Japan, Carpe Fin bursts with figures, landscapes, and action scenes inspired by a traditional Haida oral story: a sea mammal hunter goes in pursuit of food to feed his starving community and is taken underwater to the realm of a powerful spirit. Yahgulanaas refreshes the story for contemporary audiences with attention to issues of environmental degradation and the rupture of the values that honor human-nature interdependence.

Yahgulanaas is the author of eight books, including Red: A Haida Manga (2009). Carpe Fin has also been published as a book; a copy is available to explore in the installation, and copies are also for sale in SAM Shop ($29.95).

Also on view in the installation is a 19th-century carved wood and abalone headdress frontlet from SAM’s collection made by Yahgulanaas’s relative, Albert Edward Edenshaw. The imagery on the frontlet and the mural are linked by Haida stories about a man named Carpenter. The installation also includes the artist’s drawings and sketches for Carpe Fin, two of his scroll ink drawings on indigo paper, and a video in which the artist describes his process. Finally, a Chilkat robe (naaxein) hangs alongside the wood pattern board used as a guide for its making, which demonstrates Yahgulanaas’ reference to the ancient Haida formline design system.

“With Carpe Fin, Yahgulanaas has created a truly contemporary, hybrid work of art with a timely message,” says Barbara Brotherton, Curator of Native American Art. “It’s an exciting synergy between many art traditions, particularly classic Haida design and free-flowing comic book style. We are honored to bring this important commission to the museum’s walls.” 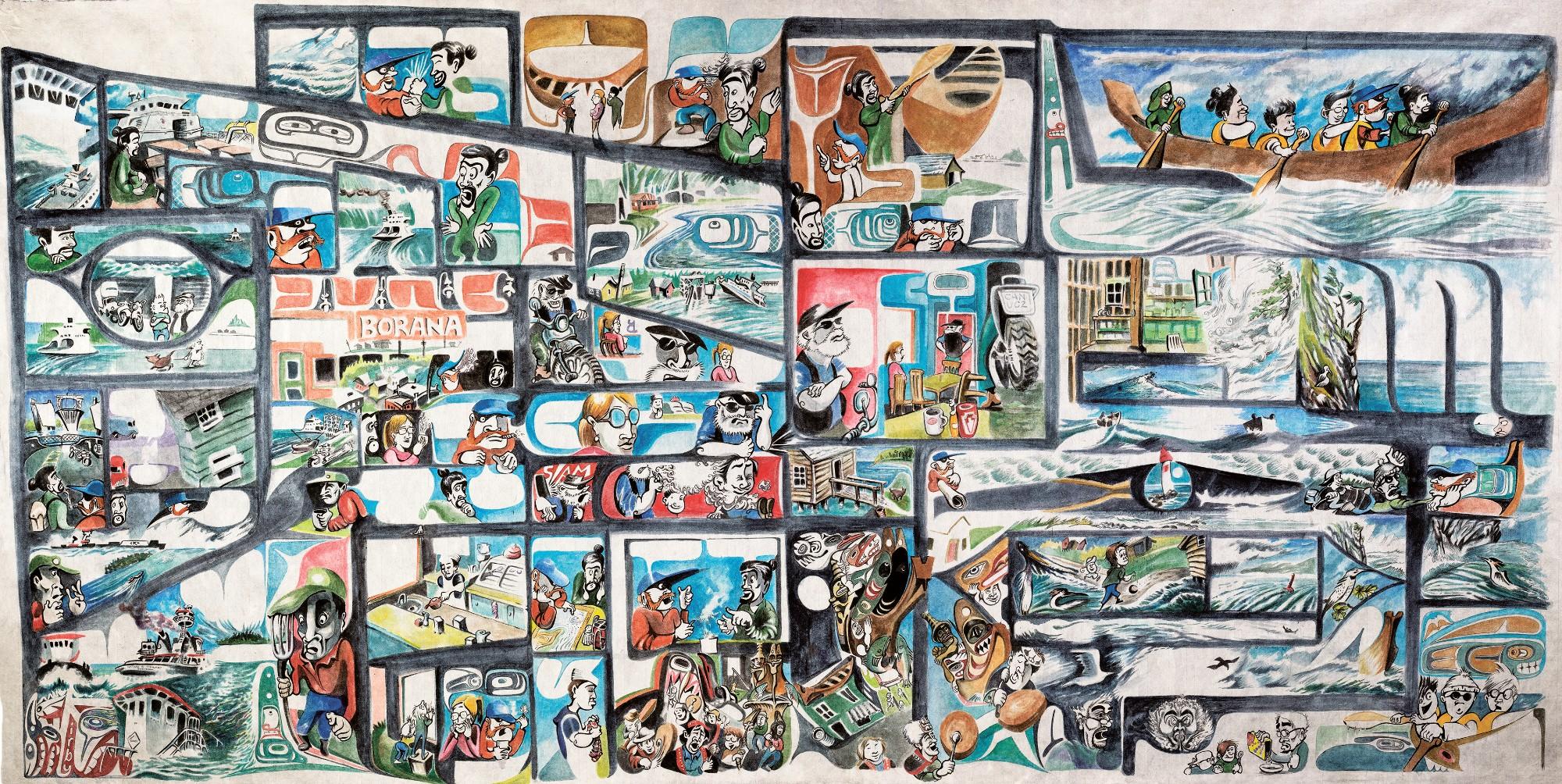 ABOUT THE ARTIST
Michael Nicoll Yahgulanaas is the creator of Haida manga: a distinctive fusion of pop culture, Indigenous iconography, and Asian graphics. His playful practice has exhibited at major institutions and is in the permanent collections of the Metropolitan Museum of Art, the British Museum, the Vancouver Art Gallery, the Museum of Anthropology in British Columbia, and the Seattle Art Museum. He was the first-ever Artist-in-Residence at the American Museum of Natural History.

Michael’s previous title Red: A Haida Manga (2009) was an Amazon Top 100 book, while Hachidori (2005) secured a single-day top three sales ranking on Amazon Japan. The Flight of the Hummingbird (2008) has been published in numerous editions and languages and commissioned as an opera. A Tale of Two Shaman (2001), a richly illustrated book written in English and three Indigenous language dialects, was reprinted in 2017. Michael’s complex and diverse art practice is documented in The Seriousness of Play by Nicola Levell. In 2017, Michael was invited to work with a major architectural firm on the design of three high rise towers in Vancouver, BC.

ABOUT SEATTLE ART MUSEUM
As the leading visual art institution in the Pacific Northwest, SAM draws on its global collections, powerful exhibitions, and dynamic programs to provide unique educational resources benefiting the Seattle region, the Pacific Northwest, and beyond. SAM was founded in 1933 with a focus on Asian art. By the late 1980s the museum had outgrown its original home, and in 1991 a new 155,000-square-foot downtown building, designed by Venturi, Scott Brown & Associates, opened to the public. The 1933 building was renovated and reopened as the Asian Art Museum in 1994 and will reopen on February 8, 2020 following an extensive renovation and expansion. SAM’s desire to further serve its community was realized in 2007 with the opening of two stunning new facilities: the nine-acre Olympic Sculpture Park (designed by Weiss/Manfredi Architects)—a “museum without walls,” free and open to all—and the Allied Works Architecture designed 118,000-square-foot expansion of its main, downtown location, including 232,000 square feet of additional space built for future expansion. The Olympic Sculpture Park and SAM’s downtown expansion celebrated their tenth anniversary in 2017.