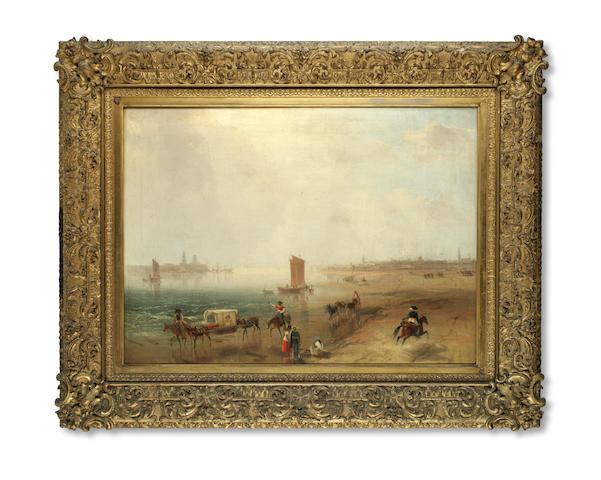 Vera Cruz, and Castle of San Juan D'Ulloa, by the British 19th century topographical painter Daniel Egerton, leads Bonhams Travel and Exploration Sale in London on 7 February. It is estimated at £200,000-300,000.

The painting has been in private hands since it was first exhibited at the Society of British Artists in the late 1830s, and has been owned by the same family for at least the last 120 years.

Daniel Egerton (1797-1842) led a short but turbulent life, and his time in Mexico played a pivotal role in his artistic career. Born in London in 1797, Egerton made his first trip to Mexico in 1831. He spent five years travelling the country sketching the scenery. On his return to England in 1836, he created 13 large scale oils and watercolours, and in due course published 12 of them as a set of lithographs. These proved very popular, and in 1840 he returned to Mexico, having abandoned his wife and family in favour of the teenage daughter of a fellow artist. The pair settled in Mexico City where Egerton and his 18 years old pregnant mistress were mysteriously murdered in 1842, possibly in an argument over a property deal.

Vera Cruz, and Castle of San Juan D'Ulloa is one of the limited number of oil paintings which Egerton produced in London in 1836, and among the few surviving works by the artist where the location is known.

Bonhams Senior Specialist, Rhyanon Demery, who is curating the Travel and Exploration Sale next February said: "Beautifully presented in an ornate gilt frame, this painting demonstrates Egerton's understanding of Mexico; bringing together landscape, history and contemporary life. We also see his skill in capturing light and movement, through the glow of the sky and movement of clouds, to the horseman racing across the beach. It is a rare and important painting of Mexico by a significant, yet elusive, British artist."