Rare Escher Print to be Offered at Bonhams New York 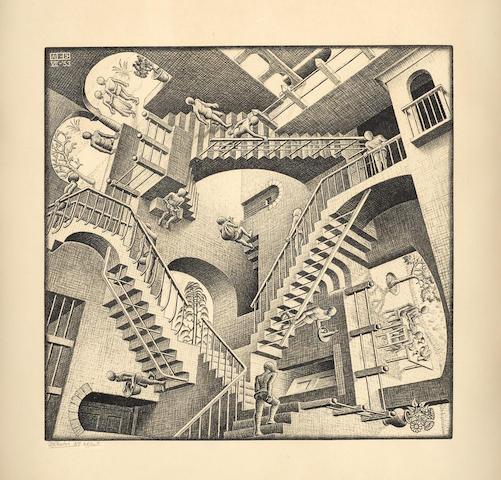 New York - On May 22, Bonhams Modern & Contemporary Prints & Multiples Sale will offer a rare impression of M.C. Escher's most famous print, "Relativity," 1953 (estimate: $15,000-20,000). "Relativity" is one of Escher's most popular examples of his "impossible constructions" where faceless inhabitants ascend and descend seven stairways, apparently oblivious to the scientific impossibility of their activities.

"Relativity," as well as an earlier woodcut "Sky and Water I," 1938 (estimate: $15,000-20,000) come from the collection of Robert and Wilcke Smith. Both commercial artists, they recognized early on the exceptional quality of Escher's graphic works. In June 1959, Robert wrote to Escher in his home in Baarn, Netherlands, to tell him he would be "extremely proud to own" two of Escher's prints, "Light and Water I" and "Relativity." In July 1959, the artist sent Smith a hand-signed letter informing him that each print was $20.00 and he could send Smith the two prints by airmail for an additional charge of $2.00. Copies of this remarkable correspondence are offered with the works, along with Robert Smith's canceled check to the artist for $42.00, initialed in pen by Escher on the back. The prints were displayed in the Smiths' home in Albuquerque, New Mexico until their subsequent deaths (Robert Smith in 2007 and Wilcke Smith in 2015).

Further highlights include "Blackglama (Judy Garland)" by Andy Warhol, 1985, a unique trial proof that he originally created a series of prints based on ten advertisements that he felt had changed American culture (estimate: $50,000-70,000); Henri de Toulouse-Lautrec's "Ambassadeurs, Aristide Bruant," 1892, a fresh and vibrant impression, which is exceptional in a poster of this size (estimate: $40,000-60,000); and Salvador Dalí's "Imaginations and Objects of the Future," 1975-6, a complete deluxe edition of the portfolio that was purchased directly from the publisher Merrill Chase in Chicago when it was originally issued and has remained in the same family ever since. The prints have never been removed from the box (estimate: $20,000-30,000).

Salon Art + Design has, over the last decade, become an unmissable event on the fall arts calendar. Now in its eleventh edition, Salon returns to the Park Avenue Armory in New York, from November 10th to 14th, featuring an impressively varied list of exhibitors.

New York City has often served as the canvas on which American dreams are painted, so it’s fitting that Edward Hopper (1882–1967), an acute observer of strangers lost in one reverie or the next, made Gotham his home and ongoing subject.

What's in a Name: 6 Retitled Paintings
Many famous paintings have gone by different names over the years. And the reasons as to why this has happened can be fascinating.