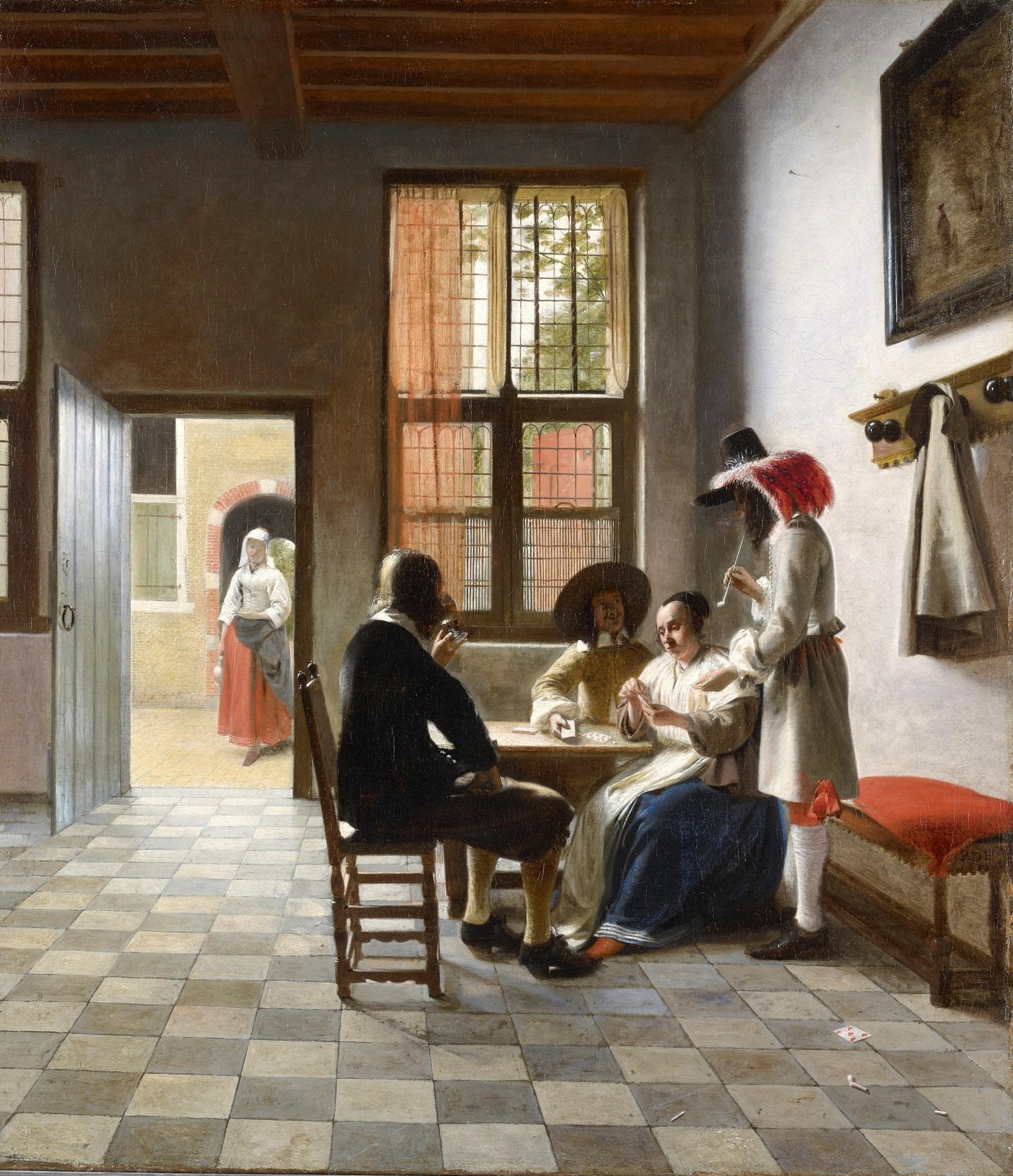 DELFT - Museum Prinsenhof Delft today announced three discoveries made in three different paintings by Pieter de Hooch as part of its exhibition, Pieter de Hooch in Delft: From the shadow of Vermeer, the largest retrospective exhibition in a generation of the work of the Delft Master. A fingerprint was discovered on the canvas Cardplayers in a Sunlit Room, from the Royal Collection Trust (from the private collection of HM Queen Elizabeth II) and infrared imaging revealed ship’s masts on A Dutch Courtyard, from the National Gallery of Art (Washington). In the painting A Woman weighing Gold and Silver Coins, from the Gemäldegalerie Staatliche Museen zu Berlin, fragments of a signature were discovered that can very likely be attributed to the famous Delft master. For the Museum Prinsenhof Delft, these discoveries are unexpected and exciting consequences of bringing together 29 paintings for the exhibition. 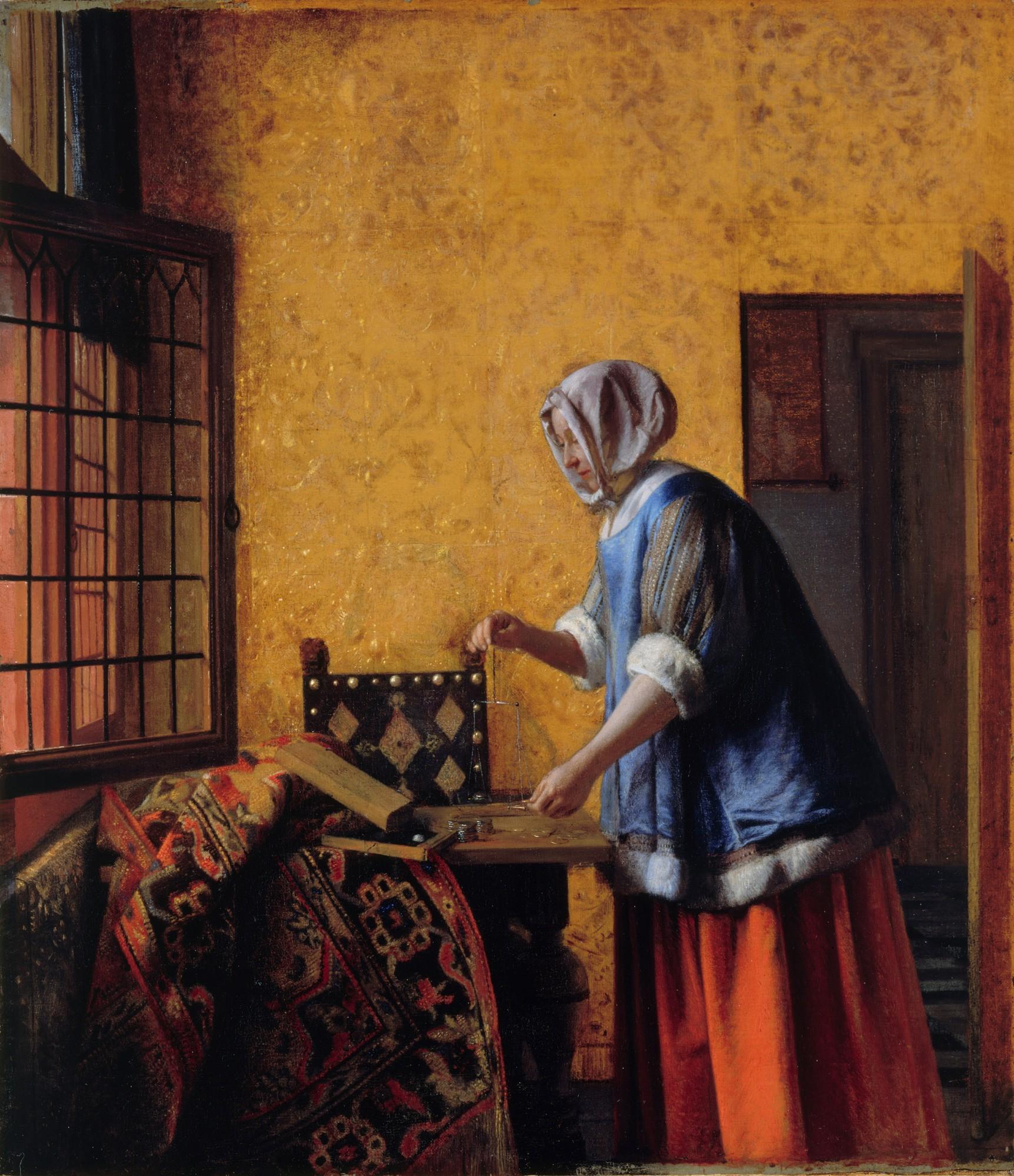 Signature
The painting A Woman weighing Gold and Silver Coins, from c. 1664, has always been considered as the most ‘Vermeer-like’ work in Pieter de Hooch’s oeuvre and it was, then, also attributed to the other Delft master for a time. Prior to the installation in Delft, an extensive examination of its condition was carried out with curator Katja Kleinert from Berlin, during which the conservator Johanneke Verhave (Restauratie Atelier Rotterdam) saw, for the first time, fragments of a signature on the right-hand bottom of the frame of the open window, which on closer inspection can almost certainly be read as P.D.HOOCH. About 100 years ago, during the time of the renowned German art historian Wilhelm von Bode, the painting A Woman weighing Gold and Silver Coins was acquired by the Kaiser Friedrich Museumsverein and it has been part of the Berlin collections ever since.

Anita Jansen, senior curator at the Museum Prinsenhof Delft and co-curator of the exhibition: "Prior to installing the painting at the Museum Prinsenhof Delft, it was extensively studied. Research on techniques during the past two years revealed that De Hooch often signed his paintings on a window frame. If you next encounter remnants of paint in precisely that spot, alarm bells go off. To now be able to say with greater certainty that A Woman weighing Gold and Silver Coins was painted by Pieter de Hooch confirms the generally accepted attribution to De Hooch. Additional research will, however, determine whether we can say with 100% certainty that we are dealing with his signature."

Fingerprint
No one ever noticed it before, since Cardplayers in a Sunlit Room, one of the highlights of the exhibition at the Museum Prinsenhof Delft, from the private collection of HM Queen Elizabeth II of England, was first painted. In the lower right, in the middle of the depiction of pieces of a broken clay pipe on a typical Delft tiled floor, conservator Krista Blessley of the Royal Collection spotted the impression of–probably–a thumb prior to packing up the 1658 canvas. What is remarkable is that the fingerprint was made in the paint while it was still wet, even before the painting was varnished. According to Anita Jansen it is almost certainly a print of the master’s thumb. A direct relationship with the artist is the obvious implication of the presence of the fingerprint in the original coat of paint, since it was produced during the process of painting. De Hooch may have lifted up the painting from the easel to move it, while the paint was still wet. 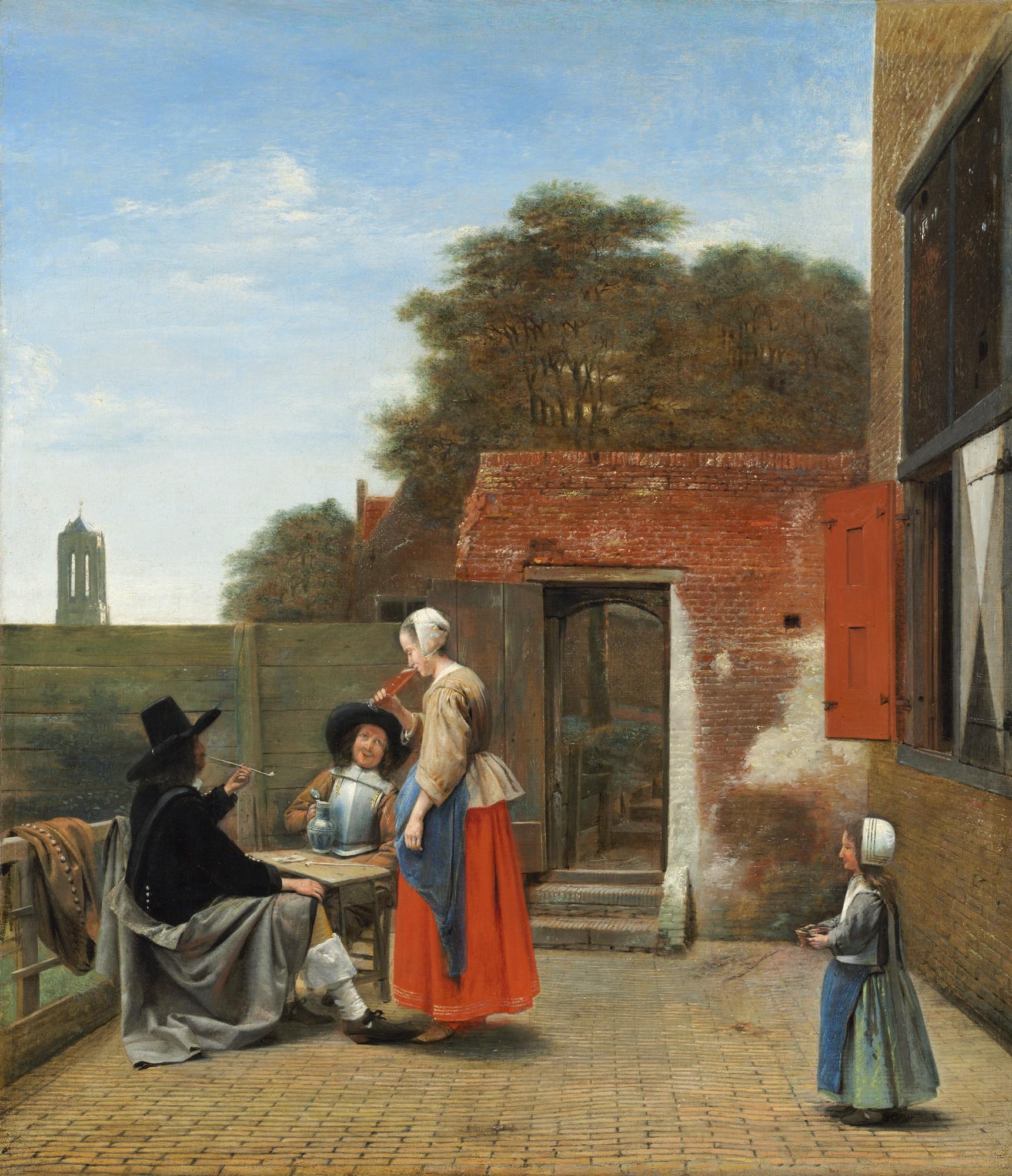 Ship’s masts
Prior to shipping A Dutch Courtyard (c. 1658-1660) to Delft, Dina Anchin, associate painting conservator at the National Gallery of Art in Washington, decided to carry out infrared imaging on the painting. To everyone’s surprise, the lines of ship’s masts were visible, drawn at the top left of the painting, ‘floating’ in the air and certainly not part of the present scene, next to the tower of the Nieuwe Kerk. The masts are the sort appropriate to rather large, rigged ships, which could not sail into the city of Delft in the 17th century. These could be ships belonging to an earlier draft, eventually altered by Pieter de Hooch himself, or a case of the reuse of a canvas. De Hooch sometimes depicted ships in his oeuvre, but did so at a later period, not during the years when he painted A Dutch Courtyard.


Pieter de Hooch in Delft: From the shadow of Vermeer
Through February 16, 2020, the first retrospective exhibition of the famous 17th-century painter Pieter de Hooch in the Netherlands will be on view. Entitled Pieter de Hooch in Delft: From the shadow of Vermeer, the exhibition focuses on the artist’s period of greatest flourishing (c. 1655-1660), during which Delft plays a leading role. Masterpieces from around the world have come to Delft: among others, the Gemäldegalerie Staatliche Museen zu Berlin, the National Gallery of Art (Washington), the Kunsthaus (Zürich) and the Royal Collection Trust (from the private collection of HM Queen Elisabeth II) have loaned works. Many famous paintings are among the works on loan, including the exhibition’s key work, The Courtyard of a House in Delft, from the National Gallery in London. Pieter de Hooch in Delft, with 29 masterpieces, is the most ambitious exhibition ever at the Museum Prinsenhof Delft and was made possible by the Turing Award 2017.

Since the exhibition opened to the public on 11 October, Pieter de Hooch in Delft: From the shadow of Vermeer has to date received 30.000 visitors – on track to become Museum Prinsenhof Delft’s most popular exhibition in its recent history. The current record is held by Vermeer returns home in 2016 which received 60,000 visitors.