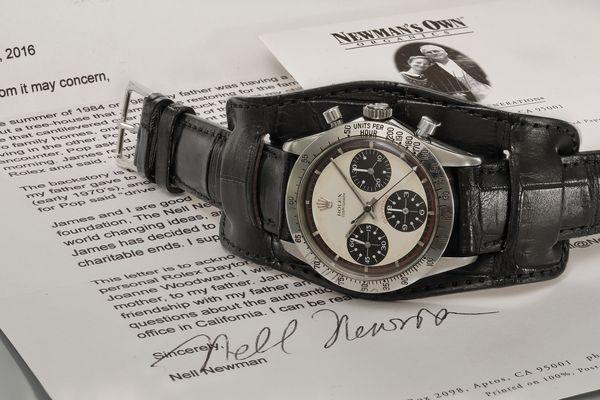 NEW YORK – 26 OCTOBER 2017 – Phillips in Association with Bacs & Russo, the worldwide market leader in watch auctions, announced that its inaugural New York sale realized $28,875,750 / CHF 28,806,448 / €24,769,618- the highest total for a watch auction in US history. This historic and record-breaking evening saw global participation from collectors across 43 countries, and a packed saleroom of nearly 700 people enthusiastically vying for some of the finest watches in the world.

The auction was led by its star lot – Paul Newman’s legendary Rolex “Paul Newman” Daytona, which sold for $17,752,500 / CHF 17,709,894 / €15,228,095, a world record for a wristwatch at auction. The timepiece sold to an anonymous bidder on the phone after 12 minutes of spirited bidding. One of the world’s most legendary and sought after of all mechanical wristwatches, this timepiece is the only “exotic”-dialed Daytona that Mr. Newman owned, inspiring the legendary nickname for the most prestigious versions of Rolex’s Daytona.

The Phillips international team of watch specialists brought together a world-class group of collectors’ wristwatches of the highest quality in terms of condition, rarity and provenance. In addition to the Rolex “Paul Newman” Daytona, we saw strong results across all brands, with timepieces by Patek Philippe, Vacheron Constantin, and Audemars Piguet selling especially well.

There was spirited bidding for the Patek Philippe Perpetual Calendar Chronograph reference 1518 in pink gold, which sold for $975,000 / CHF 972,660 / € 836,355. The world’s first perpetual calendar chronograph produced in series, only 281 examples were made – the vast majority in yellow gold, rarely ever seen in pink gold, and only four known in stainless steel.

Aurel Bacs, Senior Consultant, Phillips in Association with Bacs & Russo, states, “Kicking off our fall season, WINNING ICONS was a groundbreaking event for the international collecting community, realizing $28.8 million and establishing the highest total ever achieved for a watch auction in the United States. This historic sale was led by the one and only, original “Paul Newman” Daytona, the true ‘Adam and Eve’ of the watch-collecting world. Since joining forces with Phillips three years ago, we have cemented our reputation as market leaders and this sale underscores the continued growth of the field. With an increasingly strong demand from American clients, we are confident that our auctions will continue to achieve great heights in our upcoming sales in Geneva and Hong Kong and into 2018.”

Paul Boutros, Head of Watches, Americas, and Senior Vice President, added, “It was a tremendous honor to have been entrusted with the sale of the watch that started it all - Paul Newman’s very own Rolex “Paul Newman” Daytona. The significance of this watch cannot be overstated and we are proud of the enthusiastic response we have seen from collectors internationally, as the watch toured across the globe and then as it went under the gavel in tonight’s auction, selling for an incredible $17,752,500. We were delighted to work so closely with James Cox and Nell Newman on this memorable sale, of which a portion of the proceeds will benefit the Nell Newman Foundation and Newman’s Own Foundation, helping to ensure they can both continue working toward their important missions.”

Phillips shares the significance and history of the watch here.