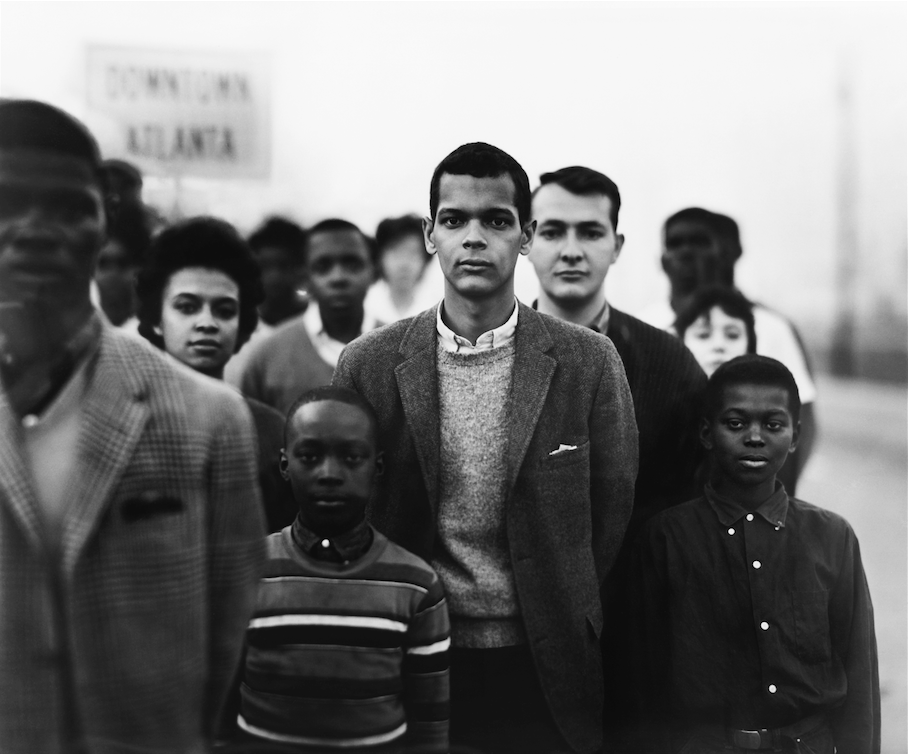 New York—Pace Gallery and Pace/MacGill Gallery are honored to announce their representation of The Richard Avedon Foundation with an exhibition of Richard Avedon’s photographs and extensive archival materials drawn from Nothing Personal, Avedon’s 1964 collaboration with James Baldwin. This will be the first comprehensive presentation of this period of Avedon’s work and will be on view at 537 West 24th Street from November 17, 2017 through January 13, 2018. To coincide with the occasion, TASCHEN will republish a facsimile edition of Nothing Personal with an accompanying booklet containing a new introduction by Pulitzer Prize-winning critic Hilton Als and rare and unpublished Avedon photographs.

Native New Yorkers Richard Avedon (1923-2004) and James Baldwin (1924-1987) met as students at DeWitt Clinton High School in the Bronx in the late 1930s. They became friends while writing for and editing The Magpie, the school’s literary magazine. Even as teenagers, they, in their writing, dealt with profound issues of race, mortality, and, as Avedon wrote, “the future of humanity” as World War II closed in on them.

In January of 1963, Avedon photographed Baldwin for a magazine assignment and suggested that they work on a book about life in America. Baldwin readily agreed. “This book,” said Baldwin at the time, “examines some national and contemporary phenomena in an attempt to discover why we live the way we do. We are afflicted by an ignorance of our natures vaster and more dangerous than our ignorance of life on Mars.”

Corresponding frequently with Baldwin, Avedon traveled extensively in 1963 and 1964 photographing portraits for the book while Baldwin wrote the essay. They met up periodically to share and discuss their progress. The collaboration resulted in some of Avedon’s most pivotal portraiture of his middle career, from civil rights icons (Malcolm X) to staunch segregationists (George Wallace); to aging stars (Joe Louis) and young fame seekers (Fabian); to powerful politicians (Adam Clayton Powell) and ordinary citizens; to young idealists (Julian Bond) and elderly pacifists (Norman Thomas); to patients committed to a mental institution who seek love, comfort, and some semblance of consideration.

At the core of the photographs – almost all of which will be on view at Pace Gallery – is the question of how Americans understand race relations and their own identities, and, by extension, the identities and civil rights of others. “Both Avedon and Baldwin cared deeply about what was (or was not) going on in America in the early 1960s. It was an explosive time, not unlike the one we live in today. The events enveloping our country provoked Avedon’s careful reflection and examination of the place and its people. There is a lot to learn from looking at this prophetic work and considering the very profound statement it makes.”—Peter MacGill

Nothing Personal was originally designed by Marvin Israel and published by Atheneum in November of 1964 under the aegis of legendary editor Simon Michael Bessie. Though denounced at the time of publication, Nothing Personal is now recognized as a masterwork whose powerful message of a confused and often compromised society seeking fleeting moments of joy, grace and occasional redemption remains equally relevant more than a half-century later.

Richard Avedon was born in New York City in 1923 and joined the Young Men’s Hebrew Association camera club at the age of 12. After serving as a Photographer’s Mate Second Class in the U.S. Merchant Marine during World War II, he began working as a freelance photographer, primarily for Harper’s Bazaar, in 1944. Under the tutelage of Alexey Brodovitch, Avedon quickly became the magazine’s lead photographer, while also creating formal portraits for many other sources, including his own portfolio.

First showcased in Edward Steichen’s Family of Man exhibition at The Museum of Modern Art in 1955, Avedon’s work has appeared in numerous exhibitions worldwide. His first retrospective was held at the Smithsonian Institution in Washington, D.C. in 1962 and was followed by solo exhibitions at the Minneapolis Institute of Art (1970), The Museum of Modern Art, New York (1974), the Amon Carter Museum of American Art (1985), and the Whitney Museum of American Art (1994), among others. Avedon was the first living photographer to receive two shows at The Metropolitan Museum of Art in New York (1978 and 2002).

Avedon died while working on an assignment called “Democracy” for The New Yorker during the 2004 presidential election. During his lifetime, he established The Richard Avedon Foundation in New York City, which now houses his archive and works with curators and collectors around the world.

Pace/MacGill, one of the world’s leading photography galleries, has been dedicated to advancing fine art photography for over 30 years. Known for discovering artists, representing masters, and placing important collections and archives into major public institutions, Pace/MacGill has presented some 200 exhibitions and published numerous catalogues on modern and contemporary photography. Founded in 1983 by Peter MacGill, in collaboration with Arne Glimcher of Pace and Richard Solomon of Pace Editions, Pace/MacGill is located at 32 East 57th Street in New York City.

Pace is a leading contemporary art gallery representing many of the most significant international artists and estates of the twentieth and twenty-first centuries. Founded by Arne Glimcher in Boston in 1960 and currently led by Marc Glimcher, Pace has been a constant, vital force in the art world and has introduced many renowned artists’ work to the public for the first time. Pace has mounted more than 900 exhibitions, including scholarly shows that have subsequently traveled to museums, and published over 450 exhibition catalogues. Today, Pace has nine locations worldwide: three galleries in New York; one in London; one in Palo Alto, California; one in Beijing; and spaces in Hong Kong, Paris, and Seoul. In 2016, the gallery launched Pace Art + Technology, a new program dedicated to showcasing interdisciplinary art groups, collectives and studios whose works explore the confluence of art and technology