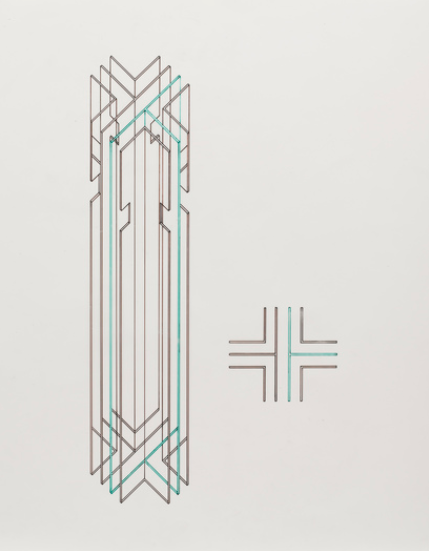 Pace Gallery is honored to present an exhibition of Robert Irwin’s new sculptures. In his 90th year, Irwin, who pioneered the Southern California-based Light and Space movement, continues to present radical new ideas of how space is perceived. Irwin’s work across different media is conditional and responsive to specific environments. His current exhibition – the artist’s eighteenth at Pace since joining the gallery in 1966 – includes nine column sculptures comprised of colored acrylic panels that defy the viewer’s certainty of the space being perceived. New “SCULPTURE/CONFIGURATIONS” will be on view from May 11 through June 23, 2018 at 32 East 57th Street, with an opening reception held on Thursday, May 10 from 4 – 7 pm.

“If there is an avant garde alive today,” states Pace Gallery Founder Arne Glimcher, “it exists in the work of Robert Irwin. Working together for the last 52 years has not only enriched my life, but has given me the clarity to see beyond the tangible art experience.”

The sculpture/configurations measure just under 10 feet in height and are assembled of acrylic units created from translucent shades of green and brown. For each work, Irwin combines different units in the creation of layered columnar sculptures.

Irwin states: “As artists, the one true inquiry of art as a pure subject is an inquiry of our potential to know the world around us and our actively being in it, with a particular emphasis on the aesthetic. This world is not just somehow given to us whole. We perceive, we shape… we discover and give value to our human potential to ‘see’ the infinite richness (beauty?) in everything, creating an extended aesthetic reality.”

During the exhibition, Pace will produce a full-color catalogue, illustrating the new works installed in the gallery and including an essay by Matthew Simms, Professor of Art History at California State University, Long Beach. Also this summer, Pace will publish the second part of Irwin’s monograph Projects and Exhibitions 2015 – 2016.

Robert Irwin (b. 1928, Long Beach, California) grew up in Los Angeles and studied at Otis College of Art and Design (1948–50), Jepson Art Institute (1951), and Chouinard Art Institute (1952–54). He later taught at Chouinard as well as the University of California, Los Angeles, and developed the graduate program at the University of California, Irvine, where he taught a generation of artists that includes Larry Bell, Chris Burden, and Vija Celmins. Irwin is the recipient of numerous awards and honors including a John Simon Guggenheim Memorial Fellowship (1976), a five-year MacArthur Fellowship (1984–89) and a Thomas Jefferson Foundation Medal in Architecture (2009).

Irwin, who began his career in the 1950s as a painter and became a pioneer of the L.A.-based Light and Space movement in the 1960s, has, through a continual breaking down of the frame, made art that is “conditional,” responding to the context of its specific environment. He employs a wide range of media, ranging from fluorescent lights to fabric scrims, colored and tinted gels, paint, wire, acrylic, and glass. But Irwin notes the medium of his fluorescent works, for instance, as “Light + Shadow + Reflection + Color”—displacing emphasis away from the materials themselves, and drawing our attention to the act of perception itself.

He has conceived over fifty-five site-conditional projects, including the Central Gardens for the J. Paul Getty Center, Los Angeles (1992–1997) and the architectural and grounds design for Dia:Beacon, New York (1999–2003). His large-scale permanent installation at the Chinati Foundation in Marfa, Texas (2001–16) is the first free-standing structure devoted exclusively to his work.