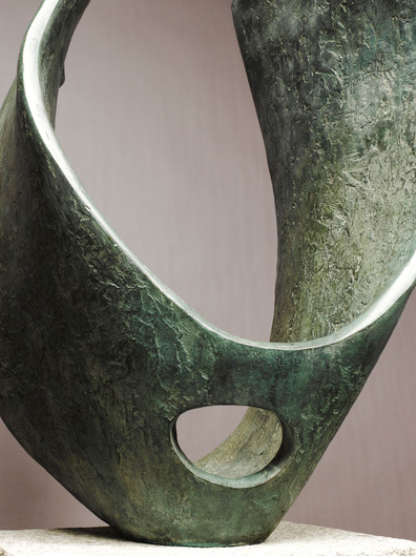 Barbara Hepworth: A Matter of Form

New York—Pace Gallery is pleased to present the first exhibition in the U.S. since 2001 dedicated to the work of pioneering modernist sculptor Barbara Hepworth. Presented in association with the Hepworth Estate, Barbara Hepworth: A Matter of Form brings together more than twenty-five sculptures and selected paintings spanning the artist’s career—from the 1930s through the 1970s. The exhibition reveals Hepworth’s legacy as one of the most influential artists of the 20th century. On view from March 9 through April 21, 2018 at 537 West 24th Street, an opening reception of the exhibition will be held on Thursday, March 8 from 6 – 8 pm. A full-color catalogue accompanies the exhibition and includes a new essay on Hepworth and her impact on contemporary artists, written by Andria Hickey, Senior Curator, Museum of Contemporary Art Cleveland.

“Hepworth is certainly one of the most important figures in modern British sculpture; but, more than just a modernist, she vigorously pursued a mystical, spirit-conjuring approach to art making throughout her career,” said Marc Glimcher, Pace Gallery President and CEO. “We’re thrilled to showcase her work again in the U.S. and this exhibition, as well as Andria Hickey’s brilliant essay, will bring long-overdue attention to Hepworth’s innovative exploration of interiority and the phenomenology of material, as well as her overlooked impact on contemporary artists such as Tauba Auerbach, Carol Bove, Alice Channer, and Eva Rothschild.”

Embodying Hepworth’s investigations of abstraction and the body, A Matter of Form includes works in a range of media— from bronze and marble to mahogany and aluminum—as well as sculptures from across Hepworth’s thematic range—such as relationships between mother and child, man and nature, and the individual to the group. The impact of Hepworth’s ongoing commitment to the “direct carving” technique stands out throughout the exhibition. Rather than traditional casting, “direct carving” allowed Hepworth to pursue profound spiritual connections with her material.

On the relationship between her body and her material, Hepworth said: “My left hand is my thinking hand. The right is only a motor hand. This holds the hammer. The left hand, the thinking hand, must be relaxed, sensitive. The rhythms of thought pass through the fingers and grip this hand into the stone. It is also a listening hand. It listens for basic weaknesses or flaws in the stone; for the possibility or imminence of fractures.”

The physical and bodily relationship to process and form deepened Hepworth’s focus on interior and exterior space. Major works in the exhibition—such as Lyric Form (1948-1949), Elegy III (1966), and three sculptures from the Family of Man series: Ancestor I (1970), Ancestor II (1970), and Bridegroom (1970)—illustrate the rich vitality of form that Hepworth invented throughout her career. Not strictly a modernist, Hepworth recognized the unconscious as a powerful force, continually investigating the metaphysical dimension as well.

Barbara Hepworth (b. 1903, Yorkshire; d. 1975, St. Ives, Cornwall) was a modernist British sculptor who, over the course of her career, changed her works from simplified naturalistic forms to purely abstract shapes. Hepworth established an enduring commitment to carving wood and stone, and transformed modernist sculpture with her pioneering method of piercing the block. She made her first pierced sculpture in 1932, introducing emptied space as an element in her compositions. As a member of the Abstraction-Création group and with influence from the continental avant-garde, Hepworth moved away from representation and shifted from figurative to abstract forms, although her works continued to maintain a visual affinity with the human form. Unlike traditional sculptural practices of working with preliminary models or through transitional phases in clay or plaster, direct carving—introduced by Brancusi around 1906 and later adopted by Hepworth—allowed her to explore the innate rhythm of her material.

Among her numerous awards and honors, Hepworth was made a Dame Commander of the British Empire (1965), and became the first woman Appointed Trustee of the Tate Gallery, London (1965). She received an honorary degree from Oxford University (1968) and was conferred with an Honorary Freedom of the Borough of St Ives (1968). In 1970, she was awarded the Grand Prix at the Salon International de la Femme, Nice (1970), and in 1973 was elected Honorary Member of the American Academy of Arts and Letters. Further testament to Hepworth’s legacy, the Hepworth Wakefield Museum in Yorkshire was inaugurated in 2011 and houses a collection of work by Hepworth and other British artists, and holds exhibitions by contemporary artists.

Pace Gallery has represented the Hepworth Estate since 1996.