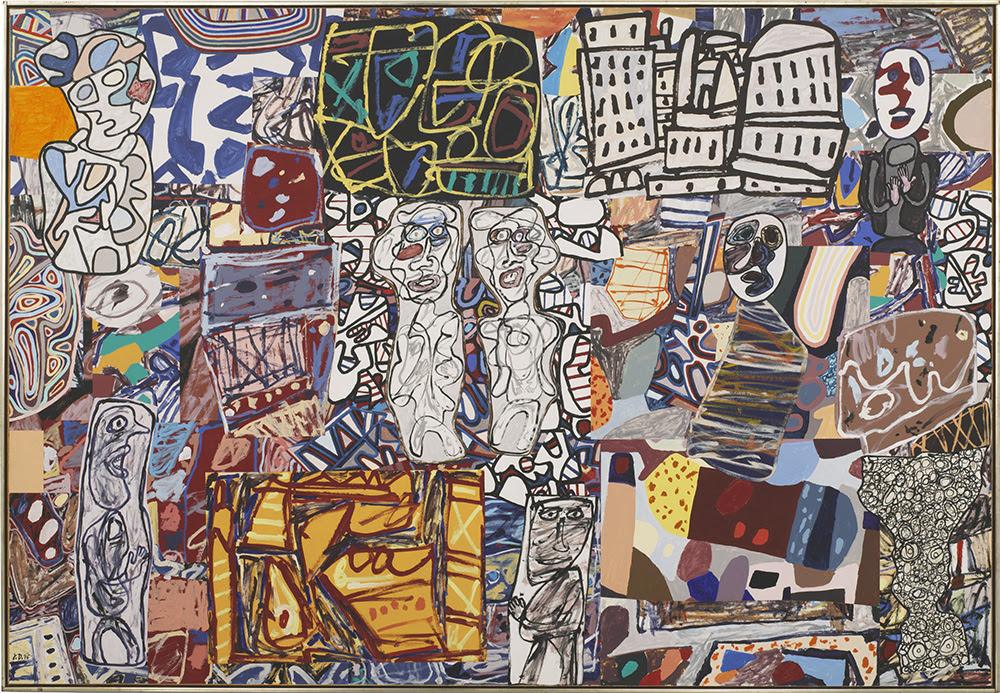 Pace Gallery is honored to present the first exhibition of Jean Dubuffet’s Théâtres de mémoire series in New York since 1979. Curated by Arne Glimcher, the founder of Pace Gallery, the exhibition evolved from the critically successful presentation of the series at Pace Gallery in London in 2017 and showcases several monumental paintings from that exhibition, as well as new loans from major museums including the Albright-Knox Art Gallery and the National Gallery. These are complemented by significant paintings generously lent by Fondation Dubuffet, as well as works drawn from leading international private collections. Jean Dubuffet: Théâtres de mémoire will be on view from May 18 to June 29, 2018 at 510 West 25th Street, with a public opening held on Thursday, May 17 from 6 – 8 PM. An illustrated catalogue featuring an introduction by Arne Glimcher, a personal letter from Jean Dubuffet to Arne Glimcher and an essay by Dr. Kent Minturn will accompany the exhibition.

“These gigantic collages are composed of overlapping papers, layer upon layer, where Dubuffet has tested their placement by moving the elements, adding, rearranging, and deleting images until an eventual perfect coalescence of the interlocking parts satisfied the artist,” says Arne Glimcher. “It was the most thrilling moment in our career together.”

The Théâtres de mémoire is one of Dubuffet’s most important series of works, and contains some of the largest paintings he ever made. The series, which Dubuffet started at age 74, also marked a new technique for him and a redefinition of his art. Each work is a vast picture made up of smaller paintings, which the artist cut out and glued to the canvas. He began his process on his studio floor, where he would arrange different combinations of cut-out figures and scenes. He then used magnets to pin the paper or canvas to the wall, allowing him to easily replace one element with another, and to overlap segments until he reached his final compositions—some spanning up to nearly eight feet high by twelve feet wide.

The paintings depict abstractions, landscapes, scribbles and figures from Dubuffet’s mind. Dubuffet titled the series after Frances Yates’ book The Art of Memory, which presents the ‘memory techniques’ used by Cicero and orators in the Middle Ages that enabled them to remember storehouses of knowledge. For Dubuffet, each of the Théâtres de mémoire is a collection of actual places and scenes that crowd and conflict in our memory. Just as memories are hazy and incoherent, the compositions have no clear narrative or starting point. In Dramatisation (1978) for example, Dubuffet brings together 42- elements to create an energetic assemblage of large and small figures and abstractions. Dubuffet requires the viewers toparticipate in this frenzy of visual information, and asks them to get lost in contemplation and experience, in Dubuffet’s words, “viewing by the mind, not the eyes”.

Further highlights of the exhibition include Mêle moments (1976), Les données de I'instant (1977), and Site aux disjonctions (1977) on loan from the Fondation Dubuffet and private collections. These works depict individuals and groupings of figures executed in distinctive styles and colors that reference earlier phases in Dubuffet’s oeuvre. As explained by Dr. Kent Minturn in the catalogue essay: “The individual elements bring to mind many of Dubuffet’s past series, including his early Marionnettes de la ville et de la campagne (1942–45), Paris Circus (1961–62), l’Hourloupe (1962–74) and his more recent haphazard Crayonnages and Parachiffres (1974–75). They are the gateway to the artist’s chief interests and obsessions that will dominate the last ten years of his artistic production”.

Jean Dubuffet (b. 1901, Le Havre, France; d. 1985, Paris) began painting at the age of seventeen and studied briefly at the Académie Julian, Paris. After seven years, he abandoned painting and became a wine merchant. It was not until 1942 that he began the work which has distinguished him as an outstanding innovator in postwar European painting. Dubuffet's interest in art brut, the art of the institutionalized and the untrained, whether a paleolithic cave artist or the writer of contemporary graffiti, led him to emulate this directly expressive and untutored style in his own work. His paintings from the early forties in brightly colored oils were soon followed by works in which he employed such unorthodox materials as cement, plaster, tar, and asphalt—scraped, carved and cut and drawn upon with a rudimentary, spontaneous line. Dubuffet’s oeuvre was propelled by a constant evolution of techniques, seeking to dislocate site, space, and established continuities. In 1966, he received three independent retrospectives at museums, including the Tate Gallery, London; Stedelijk Museum, Amsterdam; and Museum of Fine Arts, Dallas, which travelled to the Walker Art Center, Minneapolis. Jean Dubuffet has been represented by Pace since 1967.

Pace is a leading contemporary art gallery representing many of the most significant international artists and estates of the twentieth and twenty-first centuries. Under the leadership of President and CEO Marc Glimcher, Pace is a vital force within the art world and plays a critical role in shaping the history, creation, and engagement with modern and contemporary art. Since its founding by Arne Glimcher in 1960, Pace has developed a distinguished legacy for vibrant and dedicated relationships with renowned artists. As the gallery approaches the start of its seventh decade, Pace’s mission continues to be inspired by our drive to support the world’s most influential and innovative artists and to share their visionary work with people around the world.

Pace advances this mission through its dynamic global program, comprising ambitious exhibitions, artist projects, public installations, institutional collaborations, and curatorial research and writing. Today, Pace has ten locations worldwide: three galleries in New York; one in London; one in Geneva; one in Palo Alto, California; one in Beijing; two in Hong Kong; and one in Seoul. Pace will open a new flagship gallery in New York, anticipated for completion in fall 2019. In 2016, Pace joined with Futurecity to launch Future\Pace—an international cultural partnership innovating multidisciplinary projects for art in the public realm.