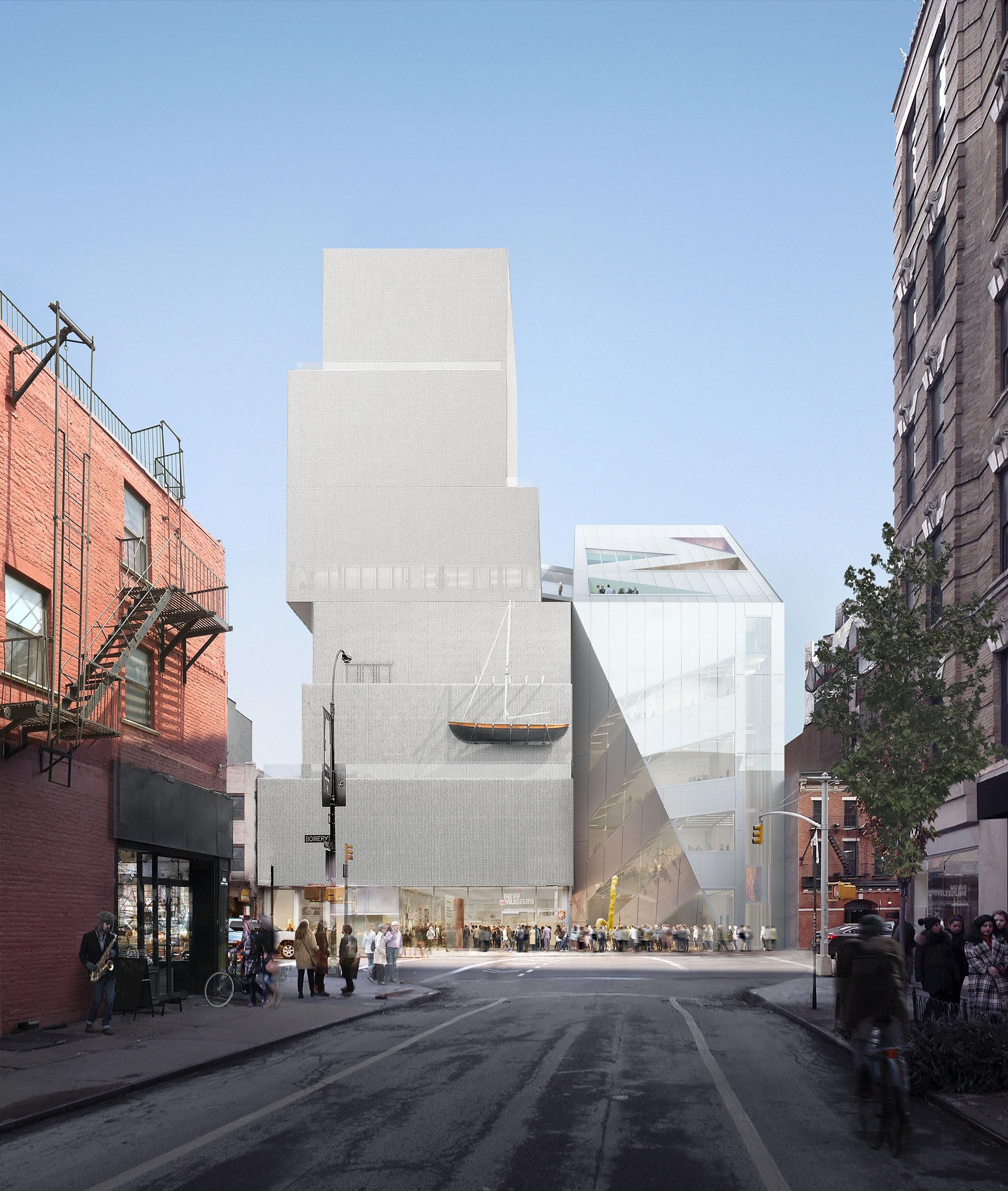 The design complements and respects the integrity of the Museum’s SANAA-designed flagship building and replaces the Museum’s 50,000 square foot adjacent property at 231 Bowery, acquired in 2008. The new seven-story, 60,000 square foot building will include three floors of galleries, doubling the Museum’s exhibition space, along with additional space for the Museum’s many community and education programs, a permanent home for its cultural incubator NEW INC, as well as increased public amenities and improved vertical circulation. 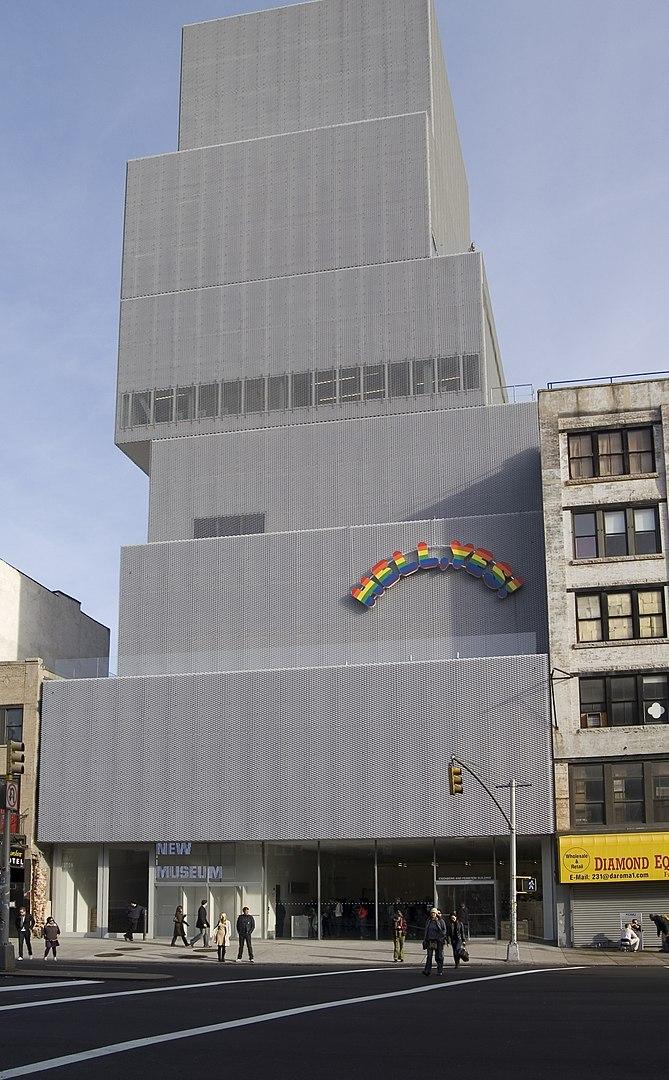 The New Museum of Contemporary Art

“Since the New Museum opened on the Bowery in December 2007, the Museum has become an international cultural destination welcoming millions of visitors,” said Lisa Phillips, Toby Devan Lewis Director. “We are thrilled to work with OMA to address our current and future needs, and selected them for their exceptional response to our brief, their civic passion, and future thinking. The OMA design will provide seamless connectivity and horizontal flow between the two buildings, expanded space for our world renowned exhibitions, and access to some of our most innovative programs that the public currently cannot see.”

James Keith Brown, President of the New Museum’s Board, also announced today that the Museum has received a lead gift of $20M to its Capital Campaign, the largest gift in the institution’s history, from longtime trustee Toby Devan Lewis. The Museum will recognize Lewis’s leadership role at the New Museum by naming the OMA building in her honor.

To date the New Museum has raised $79 million towards its Capital Campaign goal of $89 million, with $63 million in construction costs. This includes $3.1 million from the NYC Department of Cultural Affairs, with funding provided by the NYC Mayor’s Office, New York City Council, and the Manhattan Borough President’s Office. A total of $1.84 million has been awarded under Governor Andrew M. Cuomo’s Regional Economic Development Council Initiative, through the New York State Council on the Arts and Empire State Development. Groundbreaking for the new building is scheduled to start in 2020. The Museum will remain open and operational during most of the construction period, with a projected opening in 2022.

The New Building
The Museum acquired the current building at 231 Bowery eleven years ago to provide additional space for expanded programs. Gradually over the past decade, the Museum has used the building to capacity for a range of activities including additional gallery space, NEW INC, office space for Rhizome and IdeasCity, studio space for artists, archives, and back-of-house staging, prep, and storage.

Following extensive research and study of many options, including renovating the existing structure, the Museum concluded that new, ground-up construction would be the most efficient way, both spatially and financially, to fulfill its needs and civic purpose. The OMA design improves vertical circulation with the addition of an atrium stair, which will offer views of the surrounding neighborhood. The stair and new entry align to the terminus of Prince Street, opening up the Museum to the city. The new building will also provide three additional elevators (two of which are dedicated to galleries) and more public spaces and services, including an expanded lobby and bookstore, an upper level forum for education and public programs connecting to the existing Sky Room, and a new 80-seat restaurant. The OMA building also provides space for a more efficient organization of vital back of house, storage, and office space.

Adding a total of 10,096 sq. feet of exhibition space, the new galleries in the OMA building will connect with the SANAA building’s galleries on three levels (second, third, and fourth floors), with the ceiling heights aligning on each floor, doubling space for exhibitions and seamless horizontal connectivity between the buildings. The expanded spaces can be used singularly across the floor-plate to host larger exhibitions, or separately for diversity and curatorial freedom. The organization of new galleries and program spaces will support a stronger integration between exhibition programs and education, research, and residencies, that will help expand the Museum’s audiences.

“The building gives us the opportunity to continue to experiment with new formats and models around various areas of programmatic focus,” said Massimiliano Gioni, Edlis Neeson Artistic Director. “These areas include new productions and ambitious new commissions; contextual exhibition presentations; studio space for artist residencies; and international partnerships and collaborations with peer institutions around the world.”

The layout of the building program is as follows: lower levels devoted to back of house and storage; theground floor to feature a new restaurant, expanded lobby, and bookstore, along with a public plaza set back at street level; second, third, and fourth floors for galleries; fifth floor for NEW INC; sixth floor for an artist-in-residence studio, as well as a forum for events and gathering, which leads to the seventh floor for Education programming and additional events; and an atrium stair on the west façade, connecting each of the floors, along with an elevator core at the front and rear.

The new building’s façade is another notable attribute of OMA’s design. Using a laminated glass with metal mesh, the façade will provide a simple, unified exterior alongside the SANAA building, with a material that recalls and complements the SANAA façade, yet allows for a higher degree of transparency. The OMA building will communicate the activities of the Museum outwards while creating a more inviting presence drawing the public inwards.

Toby Devan Lewis
Passionately committed to the New Museum’s mission and the support of emerging artists, Toby Devan Lewis has been a trustee of the New Museum since 1997. She began her relationship with the Museum under Founding Director Marcia Tucker, and has worked closely with Lisa Phillips, Toby Devan Lewis Director over the past 20 years. As an officer on the Museum’s board and Vice President since 2013, Lewis was a member of the architectural selection committee that chose OMA to design the new building.

“Toby cares so deeply about the New Museum, and holds a singular place in our history, and has always set the bar high for rest of the Board. We are so pleased to recognize her transformational gift and her legacy by naming the building in her honor,” said James Keith Brown.

In addition to her support of the New Museum, Lewis is widely regarded as one of the leading cultural philanthropists in the country. She has served on the boards of the Cleveland Museum of Art, the Museum of Contemporary Art (MOCA), Cleveland, the Aspen Art Museum, Performa, Prospect New Orleans, and Creative Capital, and provided angel funding for the latter three, helping to make each a reality. Earlier in her career, Lewis also served for more than 20 years as curator of the Progressive Corporation’s distinguished art collection. She has been honored by many arts organizations including Madison Square Park and ArtTable.