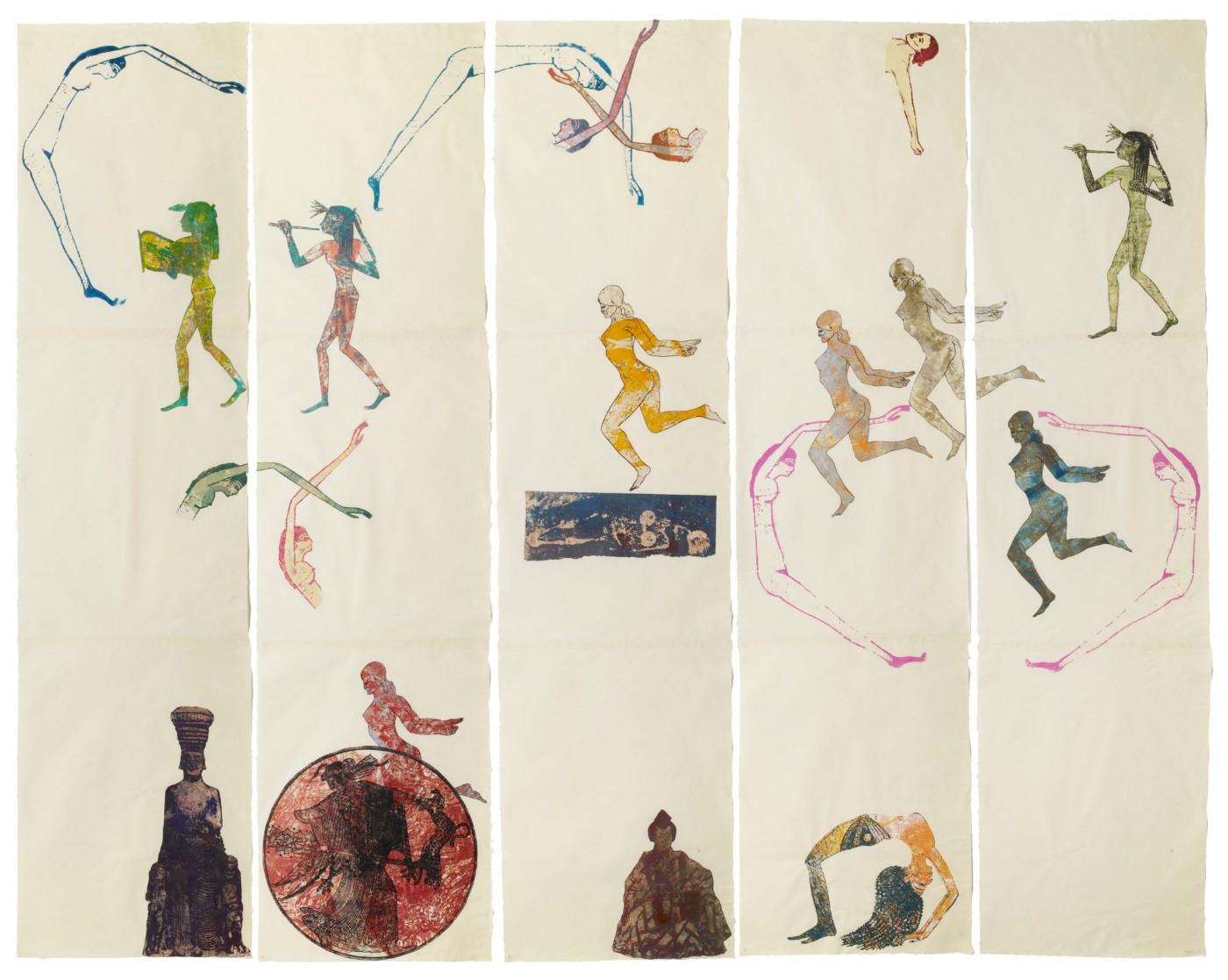 LONG ISLAND CITY, New York—MoMA PS1 presents a major survey of the work of artist and activist Nancy Spero (American, 1926–2009). A celebrated figure in the cultural life of New York City, Spero produced a radical body of work that confronted oppression and inequality while challenging the aesthetic orthodoxies of contemporary art. Among the first feminist artists, Spero drew on archetypal representations of women from diverse cultures and times in an attempt to reframe history itself from a perspective that she termed “woman as protagonist.” Organized by Julie Ault, Paper Mirror brings together more than 100 works made over six decades in the first major museum exhibition in the U.S. since the artist’s death, on view from March 31 through June 23, 2019. 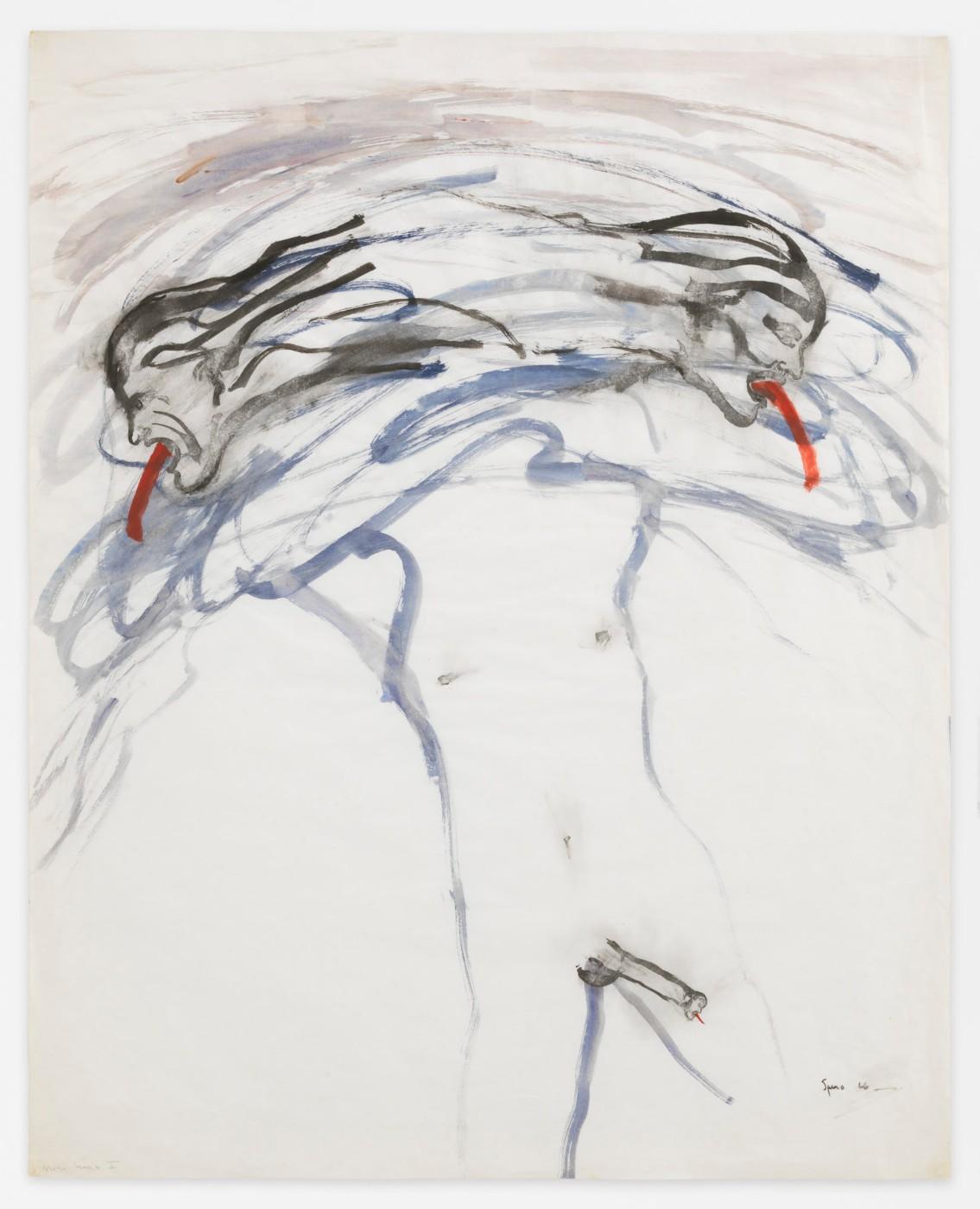 Nancy Spero: Paper Mirror surveys the full scope of Spero’s career, beginning with her early figurative paintings. Provoked by the atrocities of the Vietnam War, Spero began to incorporate activism into her work in the 1960s, a period during which she concluded that painting had become “too conventional, too establishment.” Abandoning canvas for paper, Spero’s The War Series (1966-1969) conveyed her outrage in depictions of sexualized bombs that personified the gendered brutality of the conflict. From 1966 onward Spero worked primarily on paper, and women’s history gradually but emphatically became her central subject. In scroll-like compositions from the 1970s, Spero placed fragments of text alongside female figures derived from a vast range of historical sources, probing the gendered relationship between language and power. Collaging together images from mythology, folklore, art history, literature, and media―and presenting them in a range of formats from scrolls to friezes to room-sized installations―Spero described her works as “ephemeral monuments” to the full range of women’s experience.

The exhibition features numerous works from the 1980s, 1990s, and 2000s, including the monumental work Notes in Time on Women (1979-81), a 200-foot-long frieze from the collection of The Museum of Modern Art, on view for the first time in more than a decade. Also featured is the large-scale installation Maypole: Take No Prisoners (2007), the last major work the artist completed before her death, originally realized for the Venice Biennale. Installed in MoMA PS1’s first-floor Duplex gallery, the work consists of a twenty-foot vertical steel pole with over 200 images of decapitated heads that hang from ribbons and metal chains. Created during the Iraq War but derived from Spero’s earlier drawings that responded to the Vietnam War, Maypole provokes inquiry into the cyclical nature of history, war, and its victims. 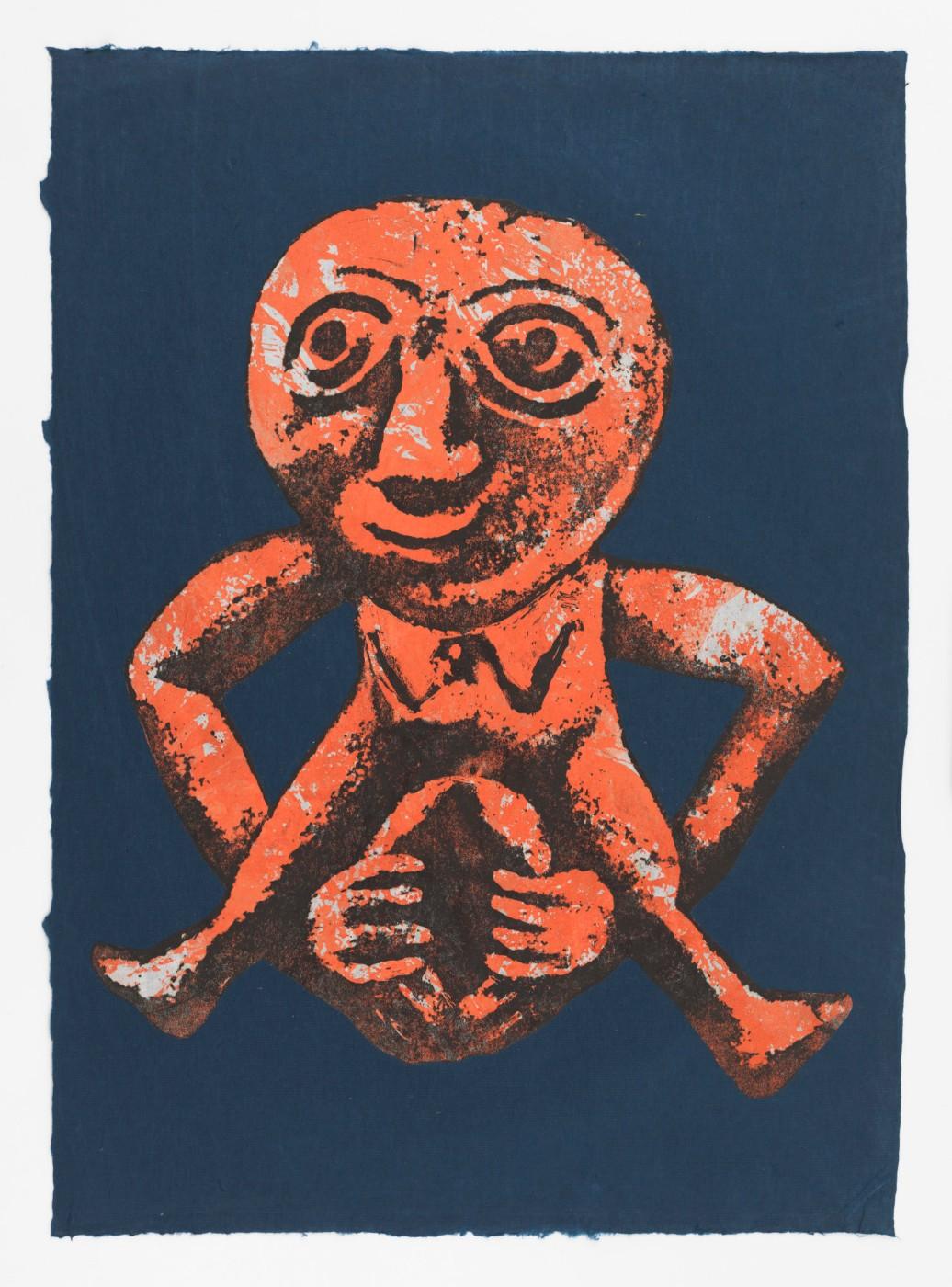 In connection with the exhibition, the Museo Tamayo and the Fundación Olga y Rufino Tamayo are publishing a catalog edited by Julie Ault, which gathers a series of original and historical texts written by novelist and poet Jesse Ball; Juan A. Gaitán, Director of Museo Tamayo; and art critic and curator Lucy R. Lippard; as well as an interview between Ault and Samm Kunce, Director of the Leon Golub & Nancy Spero Foundation for the Arts.

Nancy Spero was born in Cleveland, Ohio, and graduated from the School of the Art Institute of Chicago in 1949. She trained at the Ecole des Beaux-Arts in Paris, where she lived from 1959 until 1964. Spero, her husband (the painter Leon Golub), and their three sons eventually settled in New York City, where she lived until her death in 2009. As an activist, Spero participated in the Women Artists in Revolution (WAR) and the Art Workers Coalition in the 1960s and in 1972 co-founded A.I.R. Gallery, the first independent women’s art venue in the United States. As an artist, her work was widely exhibited in her lifetime and has been the subject of numerous monographic museum exhibitions over the past decade, including major retrospectives at the Centre Pompidou, Paris; Serpentine Gallery, London; Museum der Moderne, Salzburg; Museo d’art Contemporani de Barcelona; and the Museo Nacional Centro de Arte Reina Sofia, Madrid. Since the 1980s, she has been included in dozens of major group exhibitions, including the Venice Biennale, Documenta, and the Whitney Biennial. 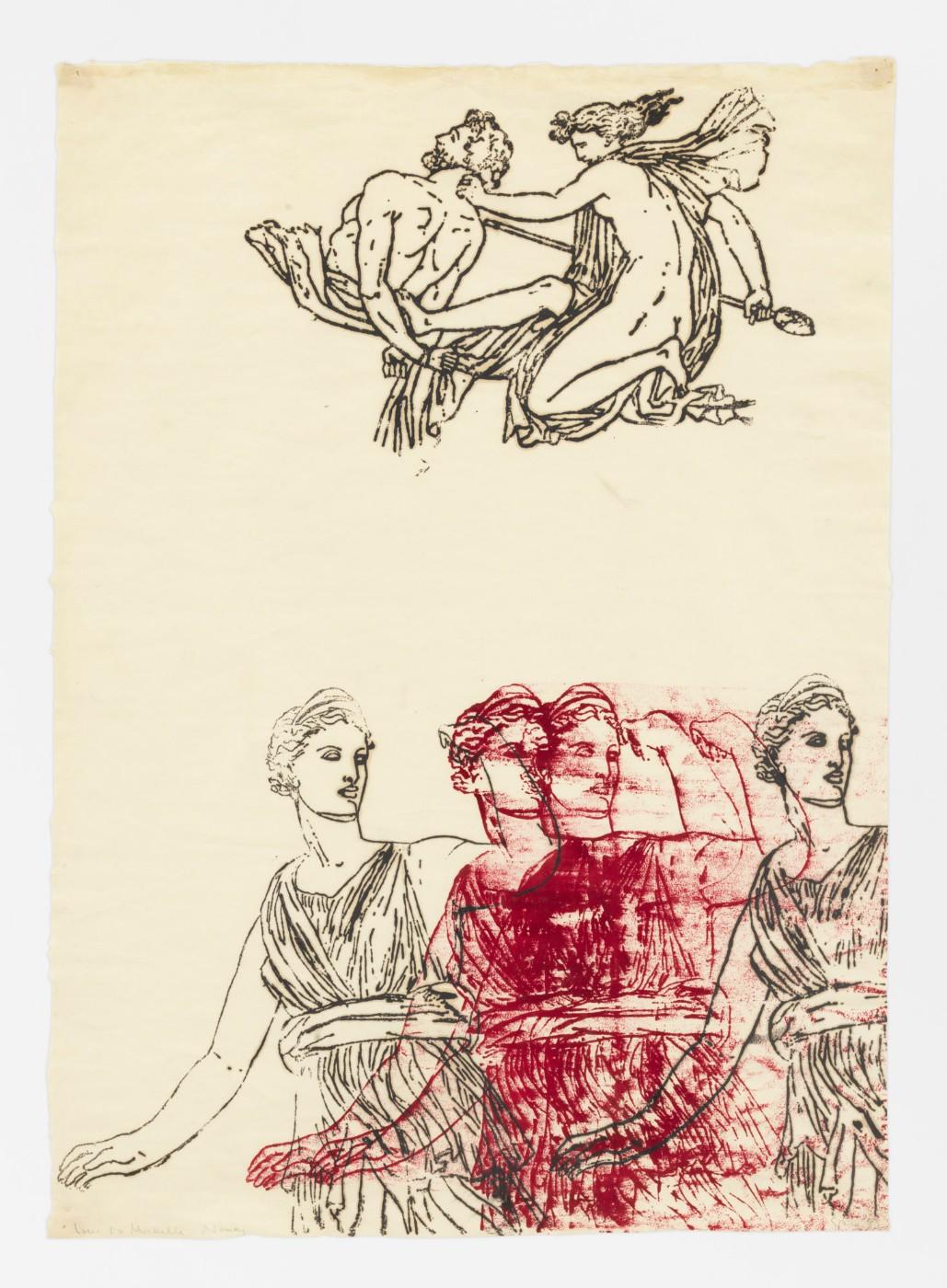 Julie Ault (b. 1957, Boston) is an artist, curator, writer, and editor whose work frequently adopts curatorial and editorial activity as creative practice. Ault has long engaged Spero’s work in writing, publications, and exhibitions. She was a co-founder of the art collective Group Material (active between 1979 and 1996), and her work as an artist and curator has been exhibited at the São Paulo and Whitney Biennials and at such venues as Artists Space, the Weatherspoon Art Museum, and the Secession, Vienna, among others. Her book, Alternative Art New York, 1965–1985 (2002) documents the critical role that alternative art groups and spaces played in the development of politically progressive and inclusive practices. Her additional publications include Show and Tell: A Chronicle of Group Material (2010), Two Cabins by James Benning (2011), and In Part: Writings by Julie Ault (2017). In 2018 Ault was named a Fellow of the MacArthur Foundation.