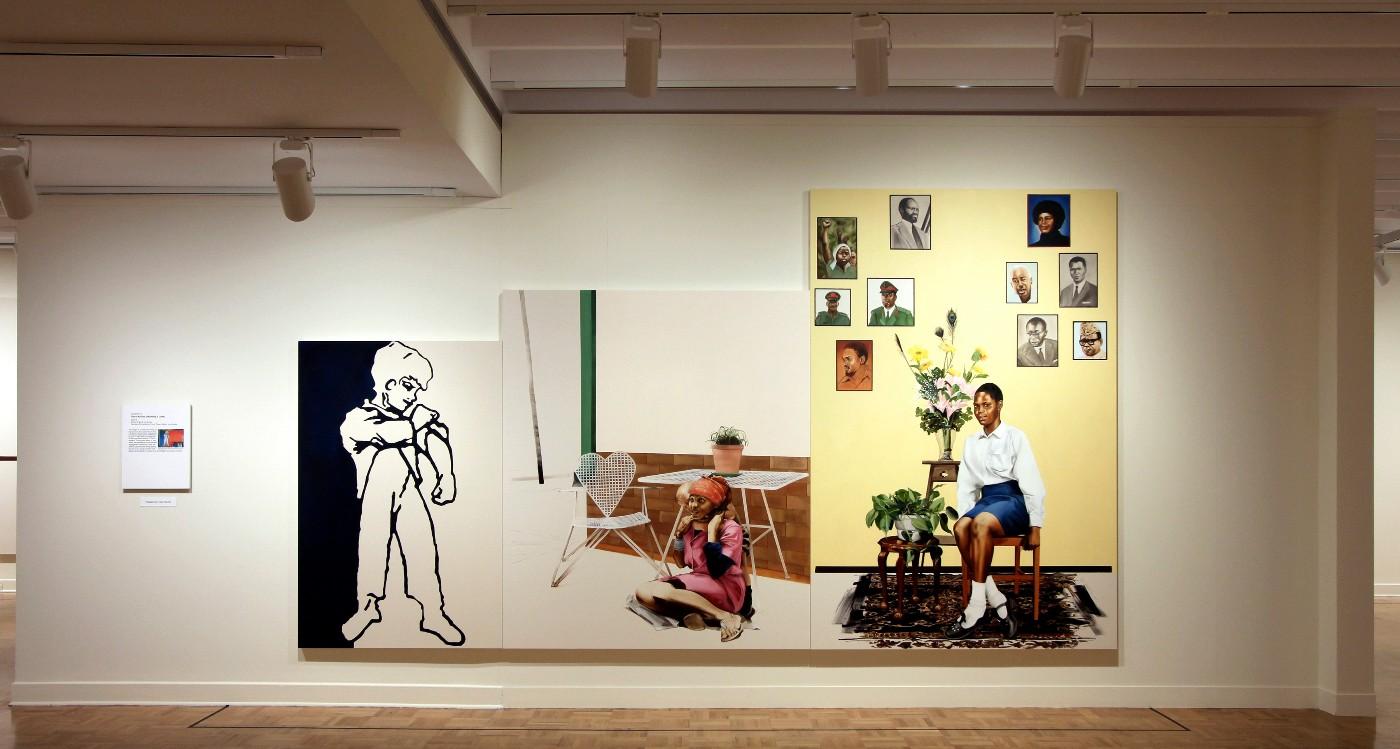 BALTIMORE, MD —The Baltimore Museum of Art (BMA) presents "Meleko Mokgosi: Acts of Resistance," an exhibition that includes a suite of new paintings by the artist that examines the idea of resistance, defined by Mokgosi as any instance in which a subject refuses to give in to the oppression of her or his spirit. On view May 2 through August 12, 2018, these large-scale figurative paintings rethink the tradition of historical European compositions by depicting daily life in southern African nation-states and post-colonial ideals of democracy. The exhibition is presented in the museum’s galleries of European art. Mokgosi will give a talk about his work at the BMA with Senior Curator Kristen Hileman on Tuesday, May 1. The exhibition galleries will open at 5 p.m. and the talk will follow in the auditorium at 6 p.m. The event is free and open to the public; no registration required.

“Meleko Mokgosi asks us to consider images of black men and women as embodiments of love, intimacy, and strength in a post-colonial world,” said BMA Dorothy Wagner Wallis Director Christopher Bedford. “The placement of his virtuosic paintings adjacent to the BMA’s galleries of European Old Masters shows the formal influence of these historic works on the present, as well as the radical innovations in contemporary portraiture being led by artists like Mokgosi.”

Several of Mokgosi’s compositions were informed by specific paintings in the BMA’s collection, such as "Madonna Adoring the Child with Five Angels," c. 1485–1490 by Sandro Botticelli, a master narrative in Western painting that has taught viewers to read spirituality and adoration in the specifics of a subject’s gender and race. Just as the white figures depicted by European artists in the BMA’s galleries are understood as representations of religious devotion, motherhood, power, wealth, love, and more rather than as “white,” Mokgosi’s beautiful and precisely rendered figures and their emotional bearing, interrelationships, and geographically specific contexts seek to transcend generalizing categories and marginalizing reactions. 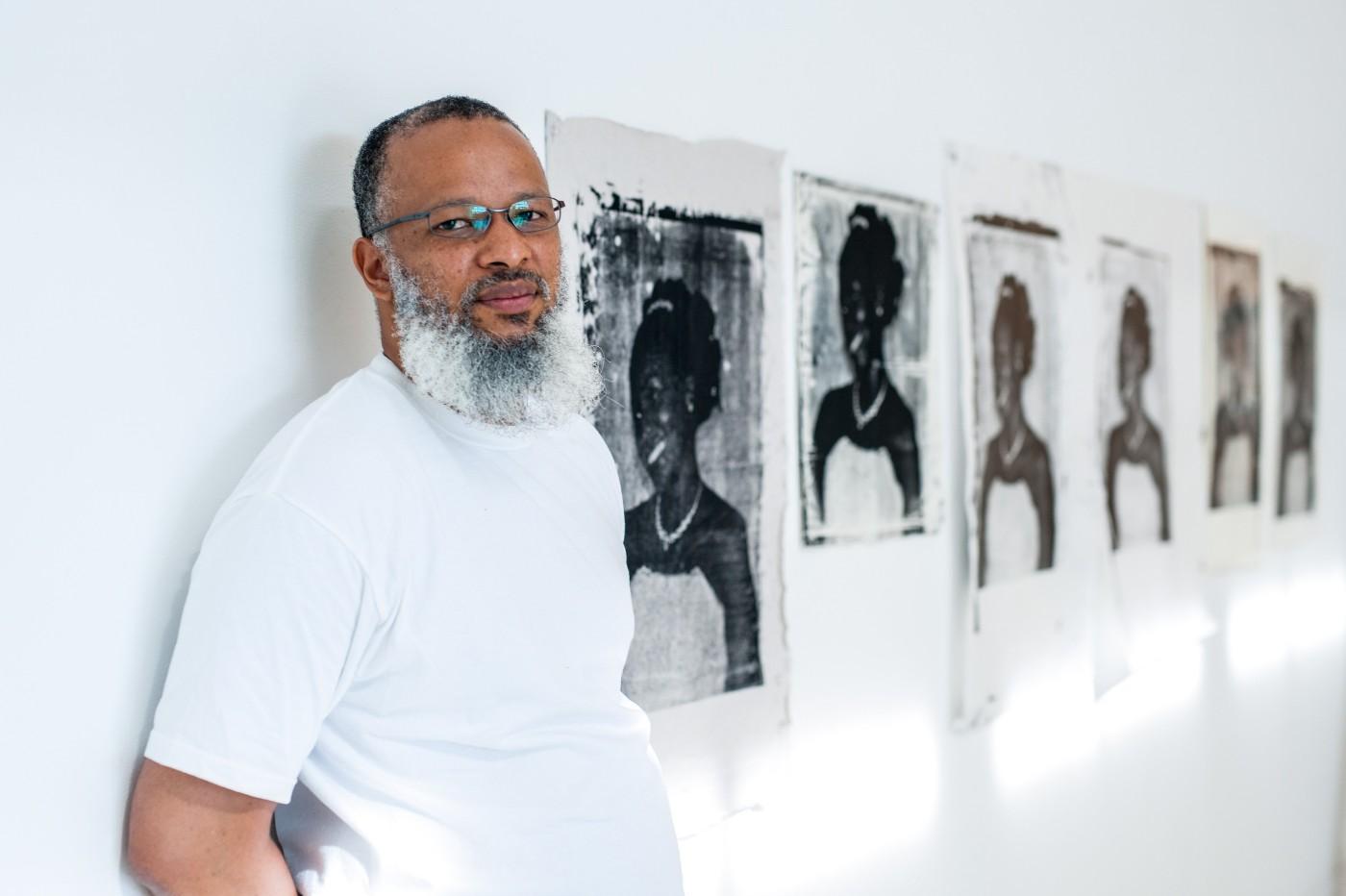 “From a Euro-centric vantage point, black figures are almost always interpreted as representing difference or an exception to the “normal” array of white-skinned figures who dominate not only artworks, but positions of historical, political, and economic privilege,” said Senior Curator of Contemporary Art Kristen Hileman. “A Euro-centric viewer’s reflection on a black subject in painting might encompass more than the idea of difference, but it can seldom escape entirely from this initial designation of “other.”

Mokgosi’s highly realistic style alludes to pre-photographic celebrations of painting that equated an artist’s mastery with his ability to convincingly portray the world. He also points to the 20th century’s adoption of realism for political propaganda and advertising. Although the artist positions himself as a history painter, he does so to argue that this mode of painting, both in the distant past and in its more recent incarnations, has gone beyond providing a skewed vision of the world; it has destroyed truths through its biases, inaccuracies, and omissions. His choice of materials also turns a canonized tradition into a tool to resist the tyrannical implications of the same tradition. He uses clear gesso rather than conventional white paint to prime his canvases, calling attention to the fact that the depicted scenes were not generated from a literal or symbolic white background. The glimpses of beige canvas disrupt any sense of illusionism and acknowledge the limits of all pictures in fully representing our world, our histories, and ourselves.

Another tactic that Mokgosi borrows from traditions of painting and propaganda is the inclusion of iconographic details. In "Pax Kaffraria: Terra Nullius (No Man’s Land)," 2010–2012, a young woman in a blue-and-white publicschool uniform is haloed by portraits of people celebrated for their roles in liberating African countries from European colonial regimes and developing African socialism. While South African anti-apartheid activists Steve Biko (1946–1977) and Winnie Mandela (1936-2018) will be recognizable to many, most of the other portraits of these world-changing leaders will be unfamiliar to Westerners. It is also unlikely that most BMA visitors will identify the outlined white boy with clenched fist in another panel of the same work as a separatist South African symbol. The exhibition invites viewers to expand their understanding of southern African life and history, all the while contemplating the power of painting to shape cultural viewpoints.

MELEKO MOKGOSI
Mokgosi (b. 1981, Botswana) received his BA from Williams College in 2007 and participated in the Whitney Museum of American Art’s Independent Study program that same year. He received his MFA from the Interdisciplinary Studio Program at the University of California Los Angeles in 2011 and was an Artist in Residence at the Studio Museum in Harlem from 2011-2012. His work has been exhibited both nationally and internationally. Recent solo exhibitions include "Meleko Mokgosi: Bread, Butter, and Power" at the Fowler Museum at UCLA; "Lex and Love: Meleko Mokgosi" at the Williams College Museum of Art; and "Meleko Mokgosi: Pax Affraria" at Rochester Contemporary Art Center and University of Rochester’s Memorial Art Gallery in 2017. "Democratic Intuition: Lerato" and "Democratic Intuition: Comrades II" were presented at the Jack Shainman Galleries in New York in 2016. Other venues include the Botswana National Gallery, Gaborone, Botswana; The Hudson Valley Center for Contemporary Art Museum, Peekskill, NY; The Studio Museum in Harlem, New York, NY; the Armand Hammer Museum of Art and Culture Center, Los Angeles, CA; Yerba Buena Center for the Arts, San Francisco, CA; and the Lyon Museum of Contemporary Art, France. His work is included in public collections of The Studio Museum; Hammer Museum; Alfond Collection of Contemporary Art for Rollins College, Winter Park, FL; and the Colby Museum of Art, Waterville, ME.

THE BALTIMORE MUSEUM OF ART
Founded in 1914, The Baltimore Museum of Art is a major cultural destination recognized for engaging diverse audiences through dynamic exhibitions and innovative educational and community outreach programs. The BMA’s internationally renowned collection of 95,000 objects encompasses more than 1,000 works by Henri Matisse anchored by the famed Cone Collection of modern art, as well as one of the nation’s finest holdings of prints, drawings, and photographs. The galleries showcase an exceptional collection of art from Africa; important works by established and emerging contemporary artists; outstanding European and American paintings, sculpture, and decorative arts; significant artworks from China; ancient Antioch mosaics; and exquisite textiles from around the world. The 210,000- square-foot museum is also distinguished by a grand historic building designed in the 1920s by renowned American architect John Russell Pope and two beautifully landscaped gardens featuring an array of 20th -century sculpture. The BMA is located in Charles Village, three miles north of the Inner Harbor, and is adjacent to the main campus of Johns Hopkins University. General admission to the BMA is free so that everyone can enjoy the power of art.

VISITOR INFORMATION
General admission to the BMA is free. Special exhibitions may be ticketed. The BMA is open Wednesday through Sunday from 10:00 a.m. – 5:00 p.m. The museum is closed Monday, Tuesday, New Year’s Day, July 4, Thanksgiving, and Christmas. The BMA is located at 10 Art Museum Drive, three miles north of Baltimore’s Inner Harbor. For general museum information, call 443-573-1700 or visit artbma.org