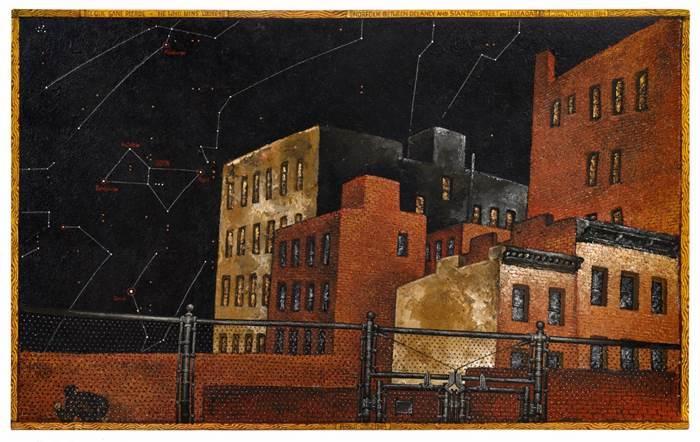 CHICAGO—On September 28, Hindman Auctions set a new world auction record for Martin Wong’s Persuit (El Que Gane Pierde - He Who Wins Looses), 1984, which sold for $1.1 million in its Post War & Contemporary Art Auction. Offered with an estimate of $500,000 to $700,000, the work saw competitive bidding and received strong interest from museums and private collectors, with a U.S. institution ultimately emerging as the winning bidder. The painting is from Rumsey Hall School, a coeducational boarding and day school in Washington, Connecticut.

Persuit (El Que Gane Pierde - He Who Wins Looses) was the top lot in the Post War & Contemporary Art auction and was among seven auction records set in the sale. The work is acrylic on canvas and measures 48 by 72 inches.

Rumsey Hall School was founded in 1900 by Lillias Rumsey Sanford of Seneca Falls, New York and moved to the current Washington campus in 1949. Persuit (El Que Gane Pierde - He Who Wins Looses) was donated to Rumsey Hall School in 1989 by Allen Finkelson, a parent of three Rumsey Hall graduates and former long-term trustee and board chair.

“The thrill of setting an auction record with the sale of this tremendous painting is amplified knowing that the proceeds of the sale will benefit the student experience at the Rumsey Hall School,” shared Zack Wirsum, Hindman’s Senior Specialist for Post War and Contemporary Art. “More thrilling still is the knowledge that the work is going to an institution where it will continue to have widespread attention and can educate the public about the specialized magic of Martin Wong.”

Martin Wong, born in Portland, Oregon in 1946, came of age in the heady California dreamscape of late 1960s San Francisco. Wong, an openly gay man of Chinese ancestry, found acceptance in the open-minded hippie counterculture while working mostly in ceramics and performance art. Wong earned the most recognition in the Bay Area for his draftsmanship, as well as the nickname Human Instamatic for his ability to crank out $7.50 portraits at street art fairs. It was not until moving to New York’s Lower East Side in 1978 that he turned to painting as his primary creative expression.

Wong is recognized for his merging of social realism and visionary art styles, as well as considering themes such as ethnic and racial identities. He became known for documenting New York City in his works. This piece captures the city in the gritty 1980s and the way in which urban life can feel imposing, particularly for the underrepresented.

Persuit (El Que Gane Pierde - He Who Wins Looses) captures an ominous, authentic and gritty New York night and illusionistic wooden frame peppered with poetic phrasing, typically borrowed from his often collaborator Piñero. In his signature uncommon social-meets magical-realist fashion, Wong champions the underdog, the underrepresented, the unseen, while also revealing the unique and flawed glory of these ignored individuals.