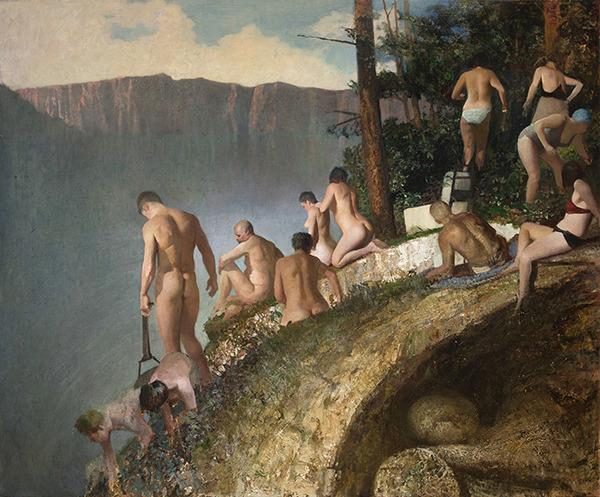 The Directors of Marlborough Gallery are pleased to announce an exhibition of new paintings by the American artist, Vincent Desiderio. The show opens Tuesday, January 9, 2018, with a reception from 6:00 – 8:00 pm, and will continue through February 3rd. This will be Desiderio’s ninth show with Marlborough Gallery.

The exhibition features ten new oil on canvas works created over the past two years that range in size from 5’ 9” to nearly 14-feet long. A central painting in the show is a large horizontal canvas entitled Theseus (all works mentioned 2017). It contains some 40 figures portrayed in a state of falling or slipping and, with its turbulence and disorienting impact, the effect is akin to a Northern European Last Judgement painting like the creations of 15th Century master Hans Memling. Theseus is directly related to the images of sleep for which the Desiderio is well known. The mythological morphology of Theseus is further explored by the artist in two agnate works that hang nearby; Theseus II and Theseus III are nearly abstracted, X-ray-like versions of the composition.

Wringing, another horizontal masterwork in the exhibition, is a deceptively straightforward depiction of a pair of hands twisting a swath of fabric. Its cryptic essence can’t help but captivate. The painting is at once melancholy in its finality and hopeful in its flavor of relief. It is simultaneously an ending and a beginning. Like the other paintings in the exhibition—depictions of no-longer-elegant movie theaters, the exterior of the Duomo in Florence, Italy, or nude bathers perched precariously on the edge of a mountain—the painting exists in an in-between space where time and place are constantly shifting and logic is something mutable and perhaps irrelevant.

Vincent Desiderio’s painterly practice often plays cognitive readings against optical clues. Even within the disjointed and intensely confusing “narratives” of the paintings, a kind of profound emotional impact on the viewer is quickly achieved. He has described his approach as “trying to create a sense of what it feels like to be at the threshold of dream images coalescing into sequentiality with no loss of their dreaminess, as it were.”

Born in 1955, Desiderio grew up in Media, PA, a suburb of Philadelphia. He graduated from Haverford College and later attended the Fine Arts Academy in Florence, Italy, followed by four years at the Pennsylvania Academy of Fine Arts. He lives and works in Westchester County, New York. Desiderio has received several grants and painting awards among which are the Pollock-Krasner Foundation Grant and the National Endowment for the Arts Painting Grant in 1987. He was the first American to receive the Grand Prize of S.A.S. Prince Ranier III, Thirtieth Annual Show of Contemporary Art in Monte-Carlo, Monaco in 1996.