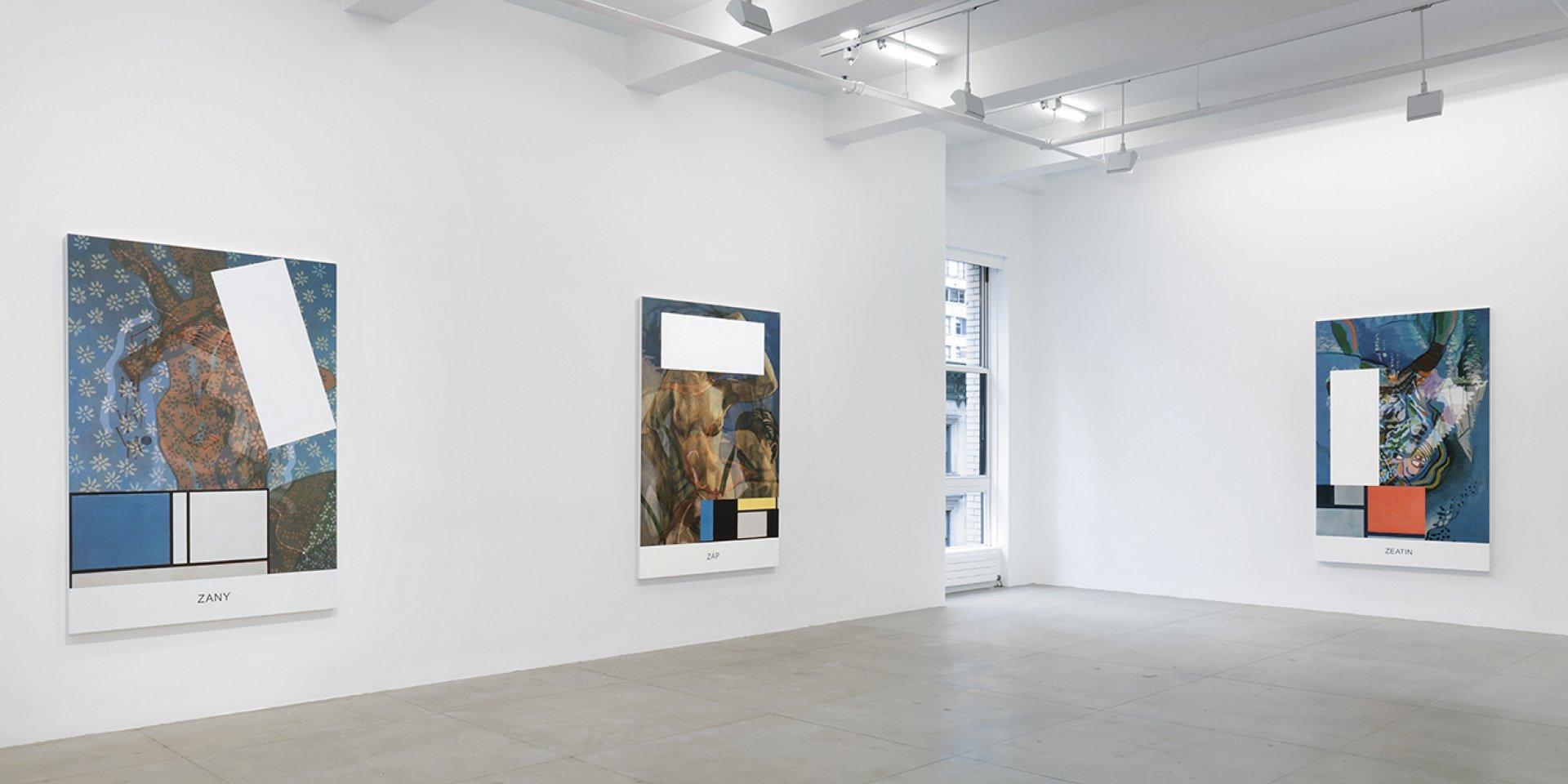 Marian Goodman Gallery New York is pleased to announce an exhibition of John Baldessari’s new body of work All Z’s (Picabia/Mondrian), 2017, opening on Friday, May 4th and on view through Saturday, June 22nd, 2018.

Building on Baldessari’s homages to the art historical canon, which have centered on subjects from Giotto to Miro to Pollock/Benton, the new exhibition pairs two icons of art, Picabia and Mondrian.

This was the first time I collided the two, Picabia and Mondrian. Mondrian is an icon of contemporary art. I felt it was the time to put the two together. Collision is a working principle of mine. When you collide two things, you see what makes them special or different.

Baldessari transposes fragments from these two masters, layering, opposing, and intersecting their histories with his own interventions and white blockages to construct a composite third way. Delighting in the pairing of incongruent words and images, he presents them as interchangeable and equal, creating a point of departure for an interconnected path that achieves a new reading. “Stories that are given shape by a pre-established structure, that merge and diverge, that come back on themselves, are visual/verbal, started by one, and finished by another,” Baldessari says. A true bibliophile and lover of literature, including dictionaries and reference books, Baldessari delights in presenting uncommon words and uncanny and unexpected imagery–puzzles for the viewer to ponder. Against the visual legacy of Picabia and Mondrian, he here juxtaposes words beginning with the letter Z. Infrequently used in daily life, their meanings are not immediately understood– “Zag”, Zebu”, Zaftig”, “Zayin”, “Zarzuela”, “Zecchino”, “Zealot”. As Baldessari says, “I don’t think Z enters our life very much, except for in jazz.”

John Baldessari was born in 1931 in National City, California. He currently lives and works in Santa Monica, California. Recent solo exhibitions include Learning to Read with John Baldessari at the Museo Jumex, Mexico City, Mexico (2018); John Baldessari. The Städel Paintings at the Städel Museum, Frankfurt, Germany (2015); and John Baldessari: 1 + 1 = 1 at the Garage Center for Contemporary Culture, Moscow, Russia (2013). Mr. Baldessari’s work was the subject of the major retrospective Pure Beauty, which traced his career from 1962 to 2010. Organized by Tate Modern, London, the exhibition travelled to MACBA, Barcelona, Spain; LACMA, Los Angeles, California; and the Metropolitan Museum of Art, New York from 2010-2011. His work was included in the 47th Venice Biennale (1997); the 53rd Venice Biennale (2009), where he won the Golden Lion Award for Lifetime Achievement; the Carnegie International (1985-86); the Whitney Biennial (1983); and Documenta V (1972) and VII (1982).

Mr. Baldessari has been the recipient of many prestigious awards, including the 2015 School of the Museum of Fine Arts Boston Medal Award and the 2012 Kaiserring Award, which is presented by the city of Goslar, Germany.

Please join us at the opening reception of All Z’s (Picabia/Mondrian) on Friday, May 4th, from 6-8 pm.