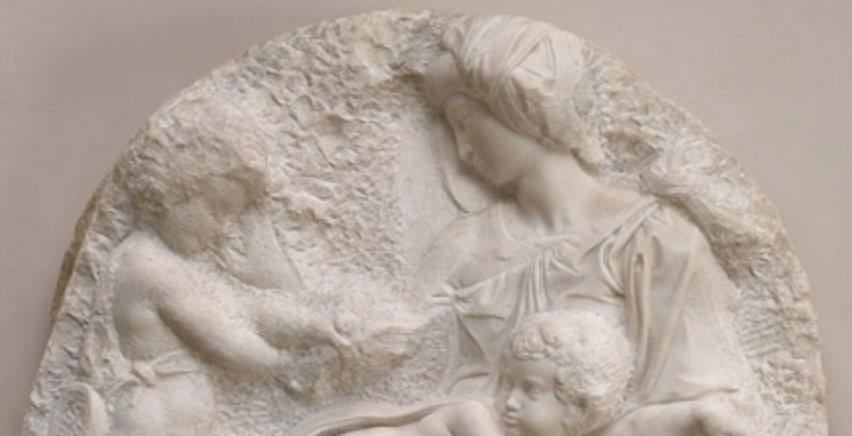 Image Courtesy of The National Gallery

London - This autumn there is unique opportunity to explore the complex relationship between three giants of Renaissance art in a special display at the National Gallery.

Leonardo, Michelangelo, Raphael around 1500 brings together eight works by Leonardo da Vinci, Michelangelo Buonarroti, and Raffaello Santi, or Raphael; three artists who were keenly aware of each other’s work and at times intensely rivalrous. Together they are credited as fathers of a new, dynamic, monumental, and psychologically incisive approach to art – the High Renaissance.

“This display of great masterpieces by Leonardo, Michelangelo, and Raphael—the triumvirate of the High Renaissance—could only happen at the National Gallery. The combination of our own astoundingly rich holdings and the exceptional loan from the Royal Academy of Michelangelo’s marble tondo makes this a completely unique event.”

The centrepiece of this free display is 'The Virgin and Child with the Infant Saint John', also known as the 'Taddei Tondo' (1504–05). The work, the only marble sculpture by Michelangelo in the UK, was an exceptional loan from the Royal Academy to the critically acclaimed Credit Suisse Exhibition: Michelangelo & Sebastiano (15 March – 25 June 2017). The sculpture currently remains on loan to the National Gallery, providing a once-in-a-lifetime opportunity to explore the connections between these three Renaissance masters.*

In 'Leonardo, Michelangelo, Raphael around 1500' the 'Taddei Tondo' is presented alongside seven choice works from the National Gallery Collection to tell the story of how these three artists inspired each other in their revolutionary approaches to art around the turn of the 16th century: how they learnt from each other, stole from each other, and worked in opposition to each other – respectful friends and acrimonious rivals.

“For a museum that doesn’t normally have sculpture at its disposal, it is fantastic to have on hand one of the greatest in Britain, not least because it complements the National Gallery’s rich holdings by these three giants of Western European art so well. Sculpture is so crucial to the development of visual art at this time and the ‘Taddei Tondo’ provides a key to understanding Michelangelo’s evolution as an artist, following but also rejecting Leonardo’s example, as well as for the young Raphael’s development of a more expressive, dynamic style in synthesis with what he was simultaneously learning from Leonardo.”