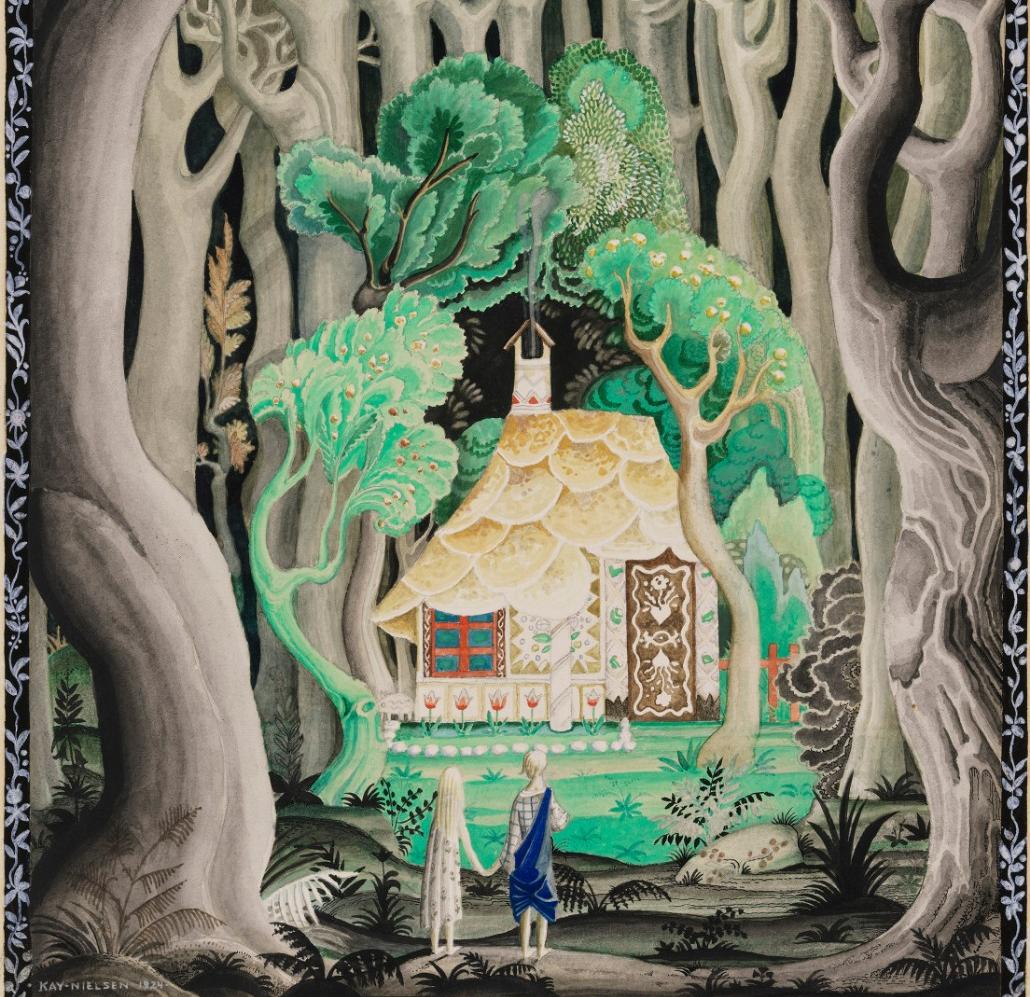 Kay Nielsen (Danish, 1886–1957), Illustration from Hansel and Gretel and Other Stories by the Brothers Grimm (published 1925), 1924. Transparent and opaque watercolor, pen and ink over graphite. Promised gift of Kendra and Allan Daniel.

BOSTON — More than a century ago, Danish illustrator Kay Nielsen (1886–1957) created exquisite interpretations of classic fairy tales that remain some of the most memorable visions of enchantment and fantasy ever to appear in print. The Museum of Fine Arts, Boston (MFA), is celebrating the artist with Kay Nielsen’s Enchanted Vision: The Kendra and Allan Daniel Collection, featuring nearly 50 of his luminous and often haunting watercolors and drawings—including many of his remarkable illustrations for East of the Sun and West of the Moon, Old Tales from the North. The exhibition marks the first time that such a large group of Nielsen’s original works, both published and unpublished, has been on public display in the U.S. in more than six decades. These highlights of Nielsen’s career—promised gifts to the MFA from collectors Kendra and Allan Daniel—give visitors a rare opportunity to study and appreciate the work of this visionary artist. Kay Nielsen’s Enchanted Vision is on view from July 20, 2019 through January 20, 2020 in the Clementine Brown Gallery. Supported by the Cordover Exhibition Fund, and the Benjamin A. Trustman and Julia M. Trustman Fund. Hotel partner is the Mandarin Oriental, Boston. 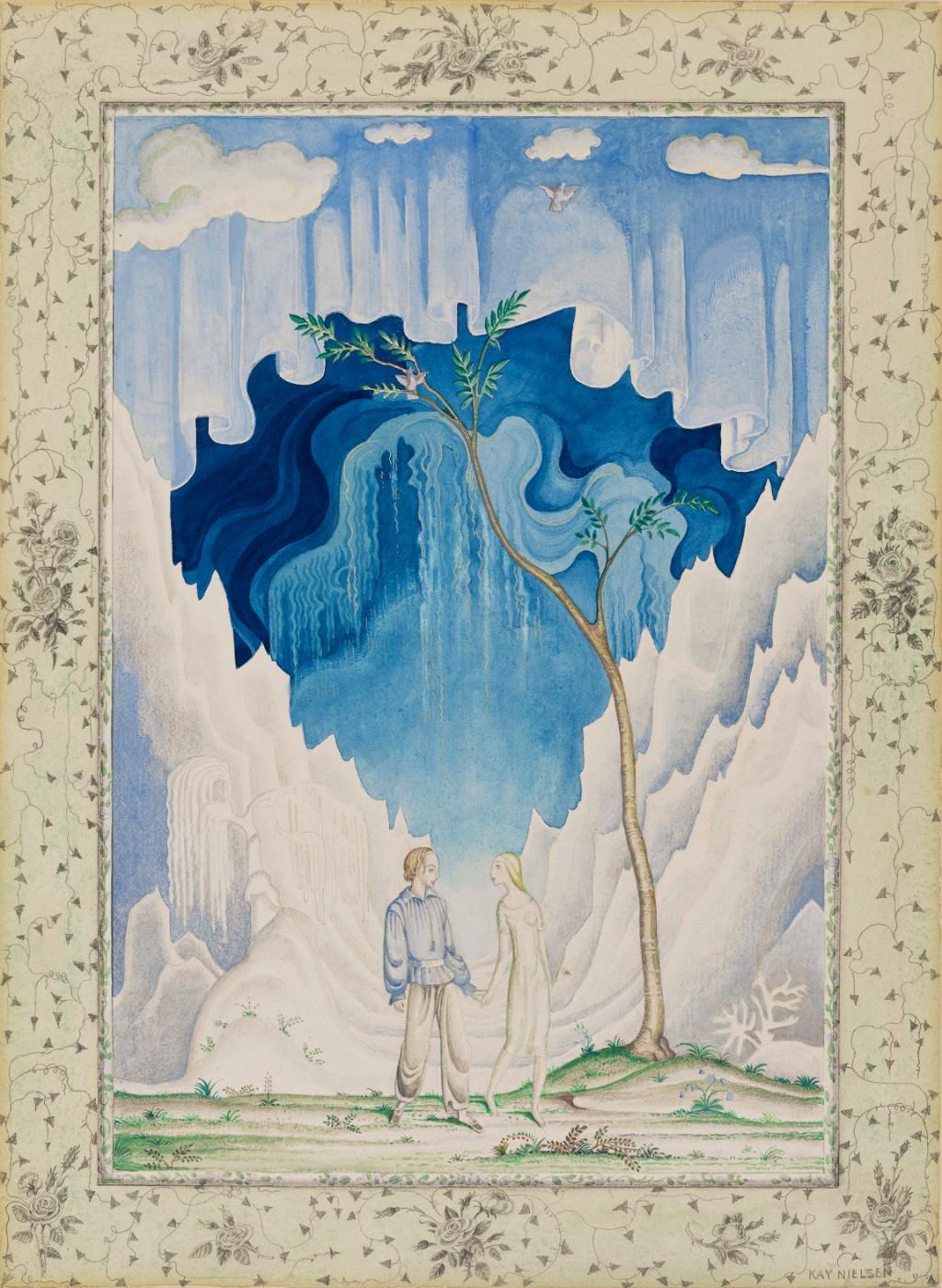 “Nielsen’s illustrations are mesmerizing when seen in print, but this exhibition provides an exceptionally rare opportunity to see his original works of art, which are breathtaking with their powerful imagery and extraordinary detail,” said Meghan Melvin, Jean S. and Frederic A. Sharf Curator of Design, who organized the exhibition. “I’m delighted to present our visitors with a chance to experience firsthand the beautiful and enchanted worlds born from Nielsen’s mind.”

The son of a prominent theater director and actress, Nielsen was deeply immersed in the performing arts during his childhood in Copenhagen, a formative experience that influenced him throughout his life. He quickly gained international recognition as an artist and theater designer in his younger years, with original illustrations exhibited and sold to collectors in London and New York. During the final years of his career, he worked as an art director for Disney on the landmark animation film Fantasia and completed a handful of public art commissions. While his published output was relatively small, Nielsen is consistently cited as a luminary among European illustrators of the 20th century, and his work continues to inspire generations of artists across disciplines.

“We’ve always felt that Kay Nielsen was an artist whose art demanded attention, and now he’s receiving it through this exhibition. It is a complete joy to share our collection with MFA visitors,” said Kendra Daniel.

Among the highlights of the exhibition are 11 illustrations from a compilation of Norse tales poetically titled East of the Sun and West of the Moon, Old Tales from the North (published 1914), which are considered the bedrock of Nielsen’s legacy. These works reflect the artist’s broad cultural and historical interests, revealing his love of Norse mythology as well as his knowledge of Japanese woodblock prints and Persian miniatures. Filled with moments of high drama and intricate detail, his illustrations are much more than visual aids to propel the narration. They also reflect Nielsen’s immersion in theater, with many of the compositions creating an impression of a stage set with figures in carefully designed costumes. In the exhibition, the illustrations are complemented by a Fendi gown and evening bag designed by Karl Lagerfeld for his Fall/Winter 2016 “Legends and Fairy Tales” couture collection, which drew inspiration from Nielsen’s watercolors for East of the Sun and West of the Moon. These dazzling contemporary additions, shown directly alongside their source material, demonstrate how Nielsen’s work continues to resonate today.

The exhibition is representative of all major phases and projects of Nielsen’s career, including eight drawings from the Book of Deathseries (1910), made while he was an art student in Paris. The stark black-and-white compositions demonstrate his experimentation with technique and presentation format, working at the forefront of avant-garde illustration in Europe. This pictorial essay contributed to the success of Nielsen’s first exhibition in London in 1912 that led to his first book illustration commission: In Powder and Crinoline(published in 1913 and released under the title The Twelve Dancing Princesses in the U.S.), a compilation of French fairytales selected and edited by Sir Arthur Quiller-Couch. The exhibition includes four of the works from this significant publication that launched Nielsen’s career in illustration.

Later works in the exhibition reflect changes to the illustrated book market brought on by World War I. During this time, Nielsen moved back to Copenhagen and returned to the performing arts, designing costumes and stage sets for theater and ballet. A decade passed before another large group of his illustrations appeared in a new edition of Fairy Tales by Hans Andersen (1924). Visitors are invited to draw comparisons between two versions of an illustration for the tale The Nightingale—one unpublished, depicting Death with a scythe, and one published, which features a gentler interpretation of the scene. The influence of Nielsen’s publisher may also be evident in the overall presentation of his work for Hansel and Gretel and Other Stories by the Brothers Grimm (1925), which features bolder illustrations in a more saturated palette. His final book commission, Red Magic: A Collection of the World’s Best Fairy Tales from all Countries, was published in 1930 and released in a more affordable format that was substantially smaller than his previous publications. The reduced scale meant that Nielsen’s artistic skill and stylistic range were not shown to their best advantage. The three original illustrations on view in the exhibition, which match Nielsen’s earlier work in technique and creativity, reposition this important project, which truly spoke to his affinity for global storytelling and international artistic traditions. 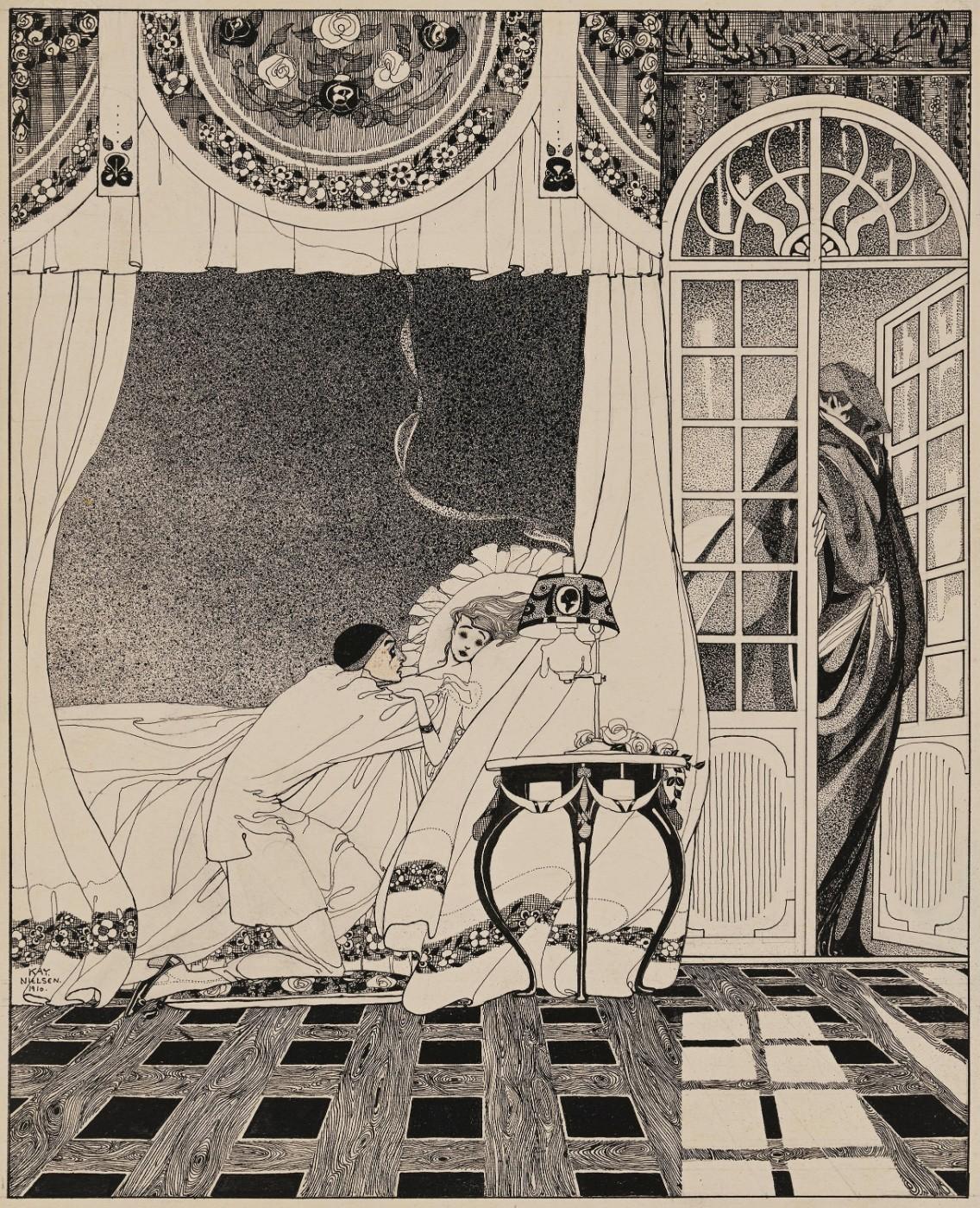 Kay Nielsen (Danish, 1886–1957), Inevitable, from The Book of Death series, 1910. Pen and ink over graphite. Promised gift of Kendra and Allan Daniel.

In addition to Nielsen’s original illustration art, the exhibition includes watercolors from the artist’s pictorial series, which were once published in contemporary magazines such as The Illustrated London News. Examples of his work in theater design and animation, including a concept drawing for the Night on Bald Mountain sequence in Disney’s 1940 film Fantasia, are also on display.

The Museum of Fine Arts, Boston (MFA), is recognized for the quality and scope of its collection, representing all cultures and time periods. The Museum has more than 140 galleries displaying its encyclopedic collection, which includes Art of the Americas; Art of Europe; Contemporary Art; Art of Asia; Art of Africa and Oceania; Art of Ancient Greece and Rome; Art of Ancient Egypt, Nubia and the Near East; Prints and Drawings; Photography; Textile and Fashion Arts; and Musical Instruments. Open seven days a week, the MFA’s hours are Saturday through Tuesday, 10 am–5 pm; and Wednesday through Friday, 10 am–10 pm. Admission (which includes one repeat visit within 10 days) is $25 for adults and $23 for seniors and students age 18 and older, and includes entry to all galleries and special exhibitions. Admission is free for University Members and youths age 17 and younger. Wednesday nights after 4 pm admission is by voluntary contribution (suggested donation $25), while five Open Houses offer the opportunity to visit the Museum for free. The Museum’s mobile MFA Guide is available at ticket desks and the Sharf Visitor Center for $5, members; $6, non-members; and $4, youths. The Museum is closed on New Year’s Day, Patriots’ Day, Independence Day, Thanksgiving, and Christmas. The MFA is located on the Avenue of the Arts at 465 Huntington Avenue, Boston, MA 02115. For more information, call 617.267.9300, visit mfa.org or follow the MFA on Facebook, Twitter and Instagram.