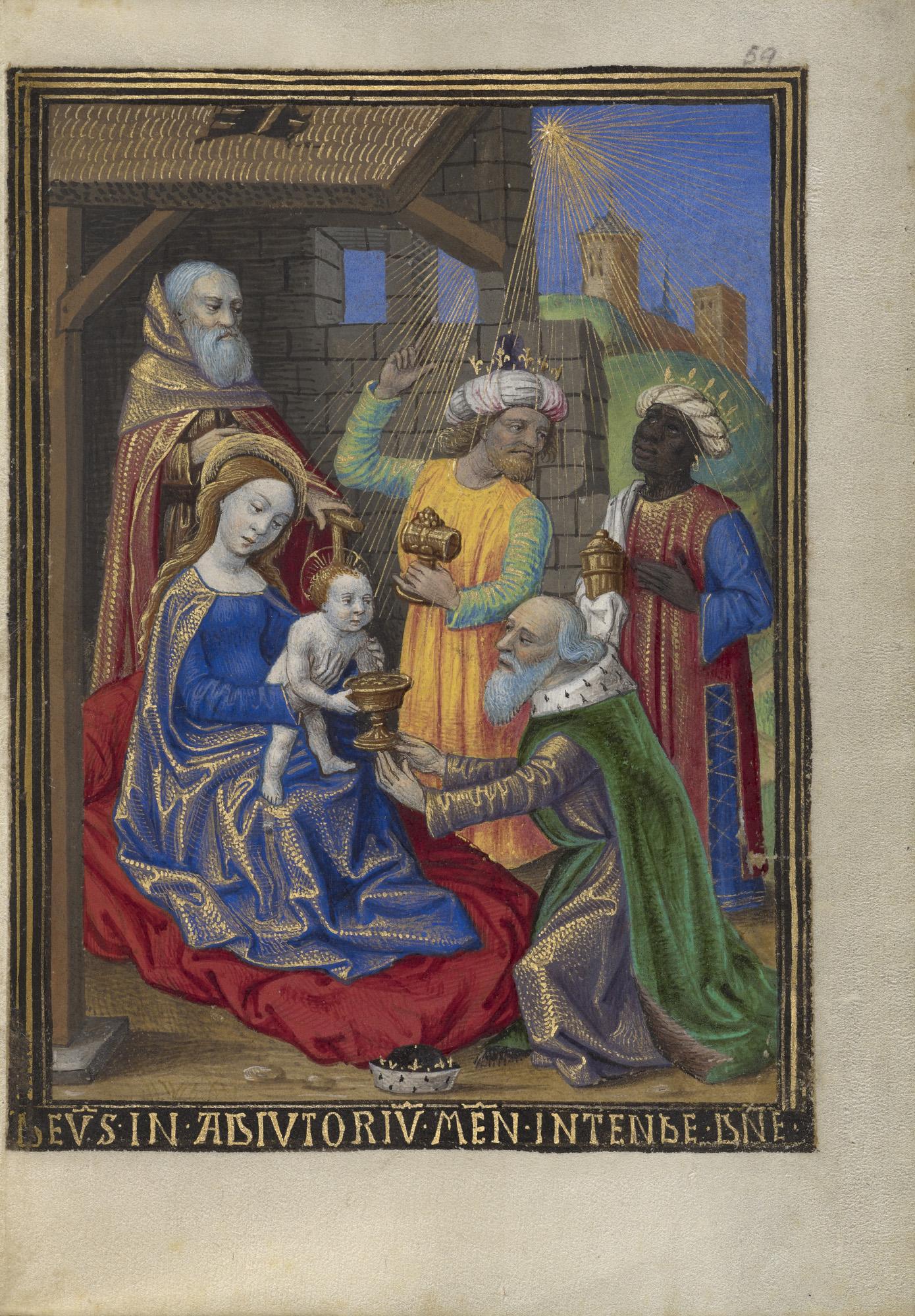 LOS ANGELES – Medieval manuscripts preserve stories of faith, romance, and knowledge, but their luxurious illuminations can sometimes reveal hidden prejudices as well.
Outcasts: Prejudice & Persecution in the Medieval World, on view January 30—April 8, 2018 at the J. Paul Getty Museum at the Getty Center, presents individual case studies that examine the way art, like language, was used to articulate a rhetoric of exclusion. Whether for reasons of race, class, gender, religious identity or sexual difference, medieval society was far more diverse than is commonly understood, but diversity did not necessarily ensure tolerance. Drawn from the Getty’s permanent collection of illuminated manuscripts, this exhibition explores the obstacles faced by those who were perceived as “others.” For today’s viewer, the vivid images and pervasive subtexts in illuminated manuscripts can serve as stark reminders of the power of rhetoric and the danger of prejudice.

“With their focus on religious subjects and tales of chivalry, it’s easy to forget that the pages of illuminated manuscripts frequently depicted social biases,” says Timothy Potts, director of the J. Paul Getty Museum. “Frequently, these works were a reflection of social norms and reinforced prejudices that were prevalent in society. In some cases these references may be subtle, in other cases not. In either case it is important to understand these works of art as also being social and historical documents that illuminate both the medieval past and the biases and prejudices that we still grapple with today.”

The exhibition begins with an illumination of the Crucifixion in the Getty’s Stammheim Missal, a masterpiece of Romanesque painting. The image is usually understood as a celebration of Christian belief, in which the sacrifice of Christ paved the way for the salvation of humanity, but this exhibition highlights the institutionalized anti-Semitism underlying Christian rhetoric about the old law and the new. Ecclesia, the personification of the Christian Church, is seen at Christ’s right, while the Jewish Synagoga appears on his left. Synagoga points at Christ, glaring, while holding a banderole (representing Old Testament law) that proclaims “cursed be he who hangs on the tree.” Below, two personifications echo and amplify the antithetical positions of these figures. In a roundel below Ecclesia, the fair-skinned Life gazes calmly across the composition at Death, who resembles contemporary (twelfth-century) caricatures of Jews with hooked noses and swarthy complexions.

“As repositories of history and memory, museums reveal much about our shared past, but all too often the stories told from luxury art objects focus on the elite,” explains Kristen Collins, curator of manuscripts and co-curator of the exhibition. “Typically created for the privileged classes, manuscripts can nevertheless provide glimpses of the marginalized and powerless and reflect their tenuous places in society.”

Some medieval writers and artists altered historical content to align with the prevailing morals of the day. Among Alexander the Great’s lovers was the young man Hephaiston and the eunuch Bagoas, but in one medieval manuscript Bagoas was recast as a beautiful woman called Bagoe in order (as the text says) to “avoid a bad example.” Even as a woman, however, Bagoe is still transgressive. In a fifteenth-century Flemish illumination, Bagoe wears luxurious flowing garments like those of the spear-carrying Amazon women in the background, who were renowned for their military prowess and heightened sexual drive. The literary and artistic interpretation of Bagoas/ Bagoe reveals the predominant prejudice against same-sex attraction and, by aligning her with the Amazons, the pervasive wariness toward powerful women. 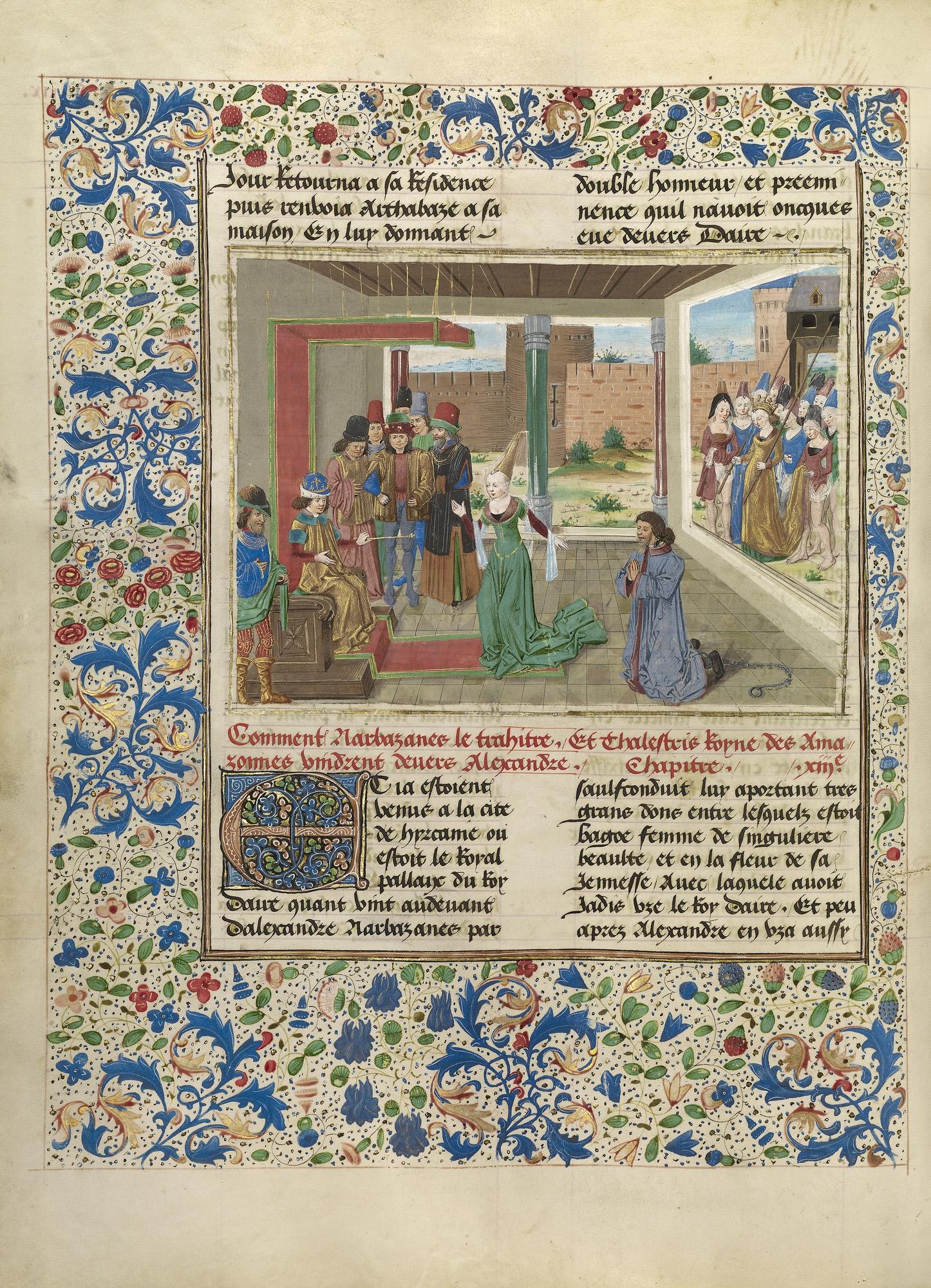 Cis-gender women and Muslims often fared no better in the medieval world. The Merovingian queen Brunhilde, a powerful heroic figure who led armies and ruled over kingdoms, fell victim to the misogyny of later medieval authors who cast her as the archetypal “nasty woman.” In Giovanni Boccaccio’s story of The Death of Brunhilde, Queen of France (1413-15) he described Brunhilde as ruthless and vengeful, characterizations that were also applied to Saracens, a pejorative medieval term for Muslims. This parallel may explain the turbaned figures in the margins of this manuscript. In medieval art, the “Saracen” became a catch-all category of people to be feared.

Color conveyed a range of meanings in medieval art. Blackness not only signified race and ethnicity, but also symbolized the absence of light, and thus, God. Demons were often rendered in shades of black or dark browns and grays. In Initial Q: David Before Saul (after 1205), color appears to have been used in both ways. In a jealous rage, King Saul draws a sword on the young David. King Saul’s melancholic temperament is conveyed not only through his actions but also by the dark-skinned demon who resembles caricatured representations of Africans, Jews, and Muslims found elsewhere in the late twelfth and early thirteenth centuries, a period of extreme intolerance and violence.

According to Bryan C. Keene, assistant curator of manuscripts and co-curator of the exhibition, “This exhibition strives to make connections between the Middle Ages and the contemporary world, specifically in the way rhetoric is used to construct society’s ‘out groups.’ Attitudes toward Jews and Muslims, the poor, those perceived as sexual or gender deviants, and the foreign peoples beyond European borders can be discerned through caricature and polemical imagery, as well as through marks of erasure and censorship.”

In an attempt to respond to possible concerns from audiences, the exhibition curators also reached out through the Getty blog and Tumblr, inviting members of the public to comment on the exhibition text as it was being drafted. That ongoing conversation can be found on the Getty Iris.

Outcasts: Prejudice & Persecution in the Medieval World is curated by Kristen Collins, curator in the Manuscripts Department and Bryan C. Keene, assistant curator in the Manuscripts Department. The exhibition is on view at the J. Paul Getty Museum at the Getty Center from January 30 –April 8, 2018. Related programming includes “Sexuality, Sanctity, and Censorship: A Conversation with Artist Ron Athey,” a discussion about sexuality, gender identity, and censorship in relation to the exhibition and, “Anti-Semitism and Islamophobia in the Middle Ages and Today” a panel discussion featuring Sara Lipton, Hussein Fancy, and Jihad Turk.