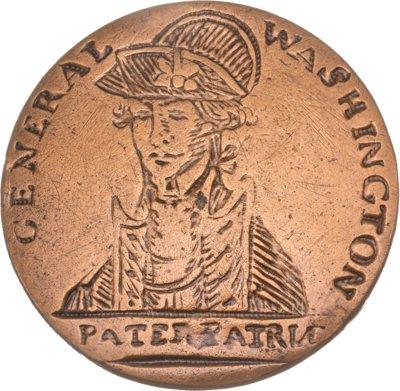 DALLAS, Texas (Jan. 25, 2018) — The only inaugural button referring to George Washington as the "Father of His Country" (perhaps the earliest instance of the use of the phrase) will open for bidding at $20,000 when Heritage Auctions presents Part II of the David and Janice Frent Collection of Political & Presidential Memorabilia Feb. 24. The auction offers 658 lots of extraordinary pin backs, banners, campaign flags and assorted campaign paraphernalia.

"The record-setting debut of the Frent Collection realized a stunning $911,538 last October," said Tom Slater, Director of Americana Auctions at Heritage, "and Part II is every bit as exciting."

The landmark Frent collection — widely regarded as the largest and most comprehensive collection of its kind ever assembled — will span eight dedicated auctions with everything from buttons to banners dating from the founding of the republic up through recent elections.

The collection's extraordinary Washington Inaugural Button is stamped with the words "Pater Patriæ" (Father of his Country) and is the only portrait button in the accepted canon of Washington inaugural buttons. The Frent collection specimen is superior to one recently acquired by Washington's Mount Vernon historic site.

An outstanding example of the iconic "Ship of State" Silk Campaign Flag for Henry Clay's 1844 campaign also opens with a $20,000 bid. Considered the most desirable Clay flag variety, the rarity has fine display presence and offers a very special opportunity for the advanced specialist in political textiles.

Several photographic campaign items will cross the block, and a stunning 1860 brooch featuring an ambrotype portrait of Abraham Lincoln known as the "Cooper Union" pose will open at $12,000. The nation's leading portrait photographer, Mathew Brady, took the image while Lincoln was in New York to give a speech at Cooper Union Institute in February 1860. "Although Lincoln photographic items produced for the 1860 election were widely distributed, almost every example of the George Clark ambrotype suffers condition problems. The marvelous Frent example is essentially in mint condition and is the finest known example to exist," Slater said.

Additional highlights include but are not limited to:

· A Folk Art Parade Banner for Horatio Seymour, the Democratic Party nominee for president in the 1868 presidential election

Bidding opens for the Feb. 24 auction of Part II of the David and Janice Frent Collection of Political & Presidential Memorabilia Feb. 5 at HA.com/ 6187. For more information, please contact Tom Slater at 214-409-1441 or TomS@ha.com.

Learn more about this item at auction.
Tags
Heritage Auctions