Hail the Dark Lioness: the Visual Activism of Zanele Muholi 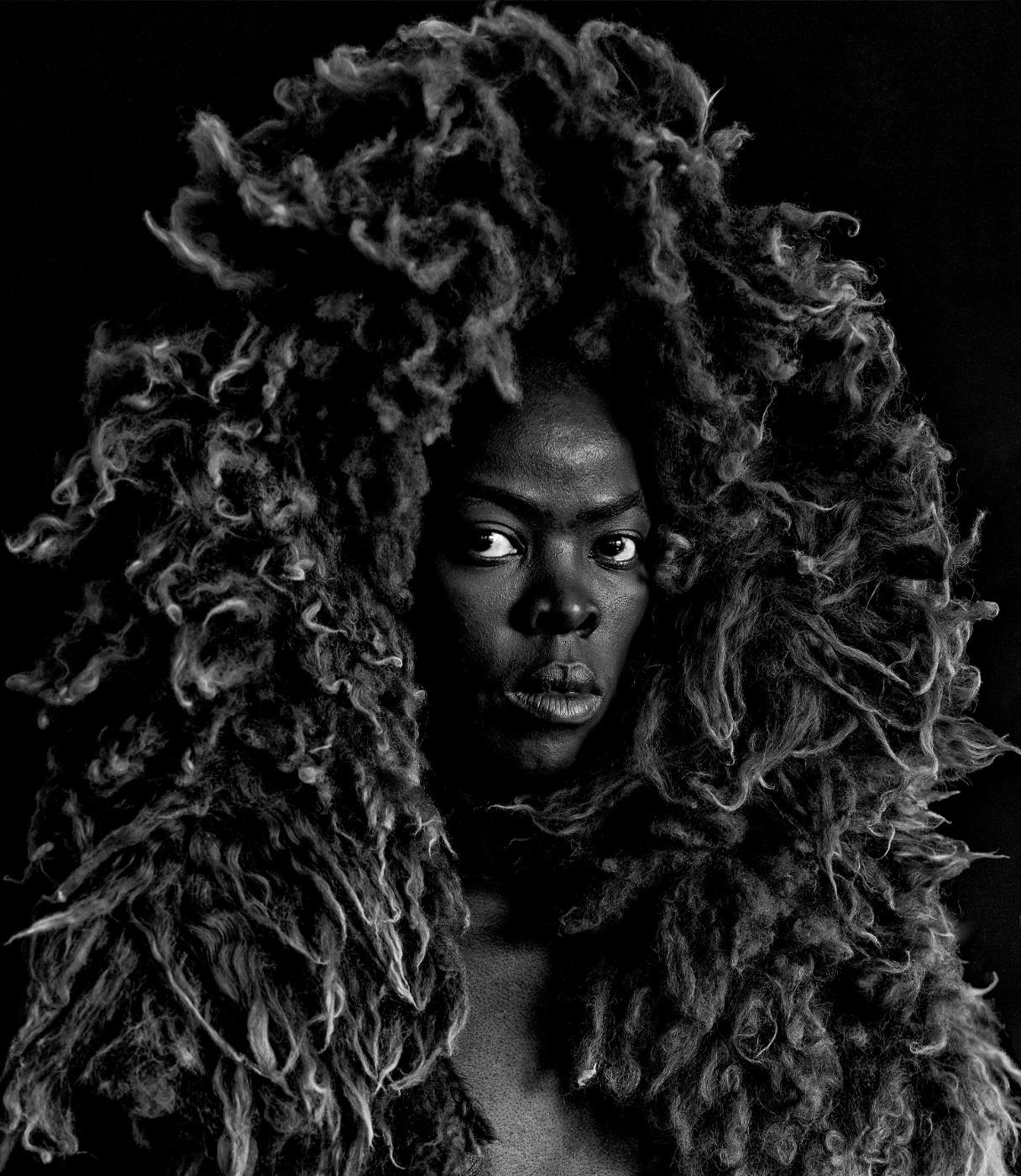 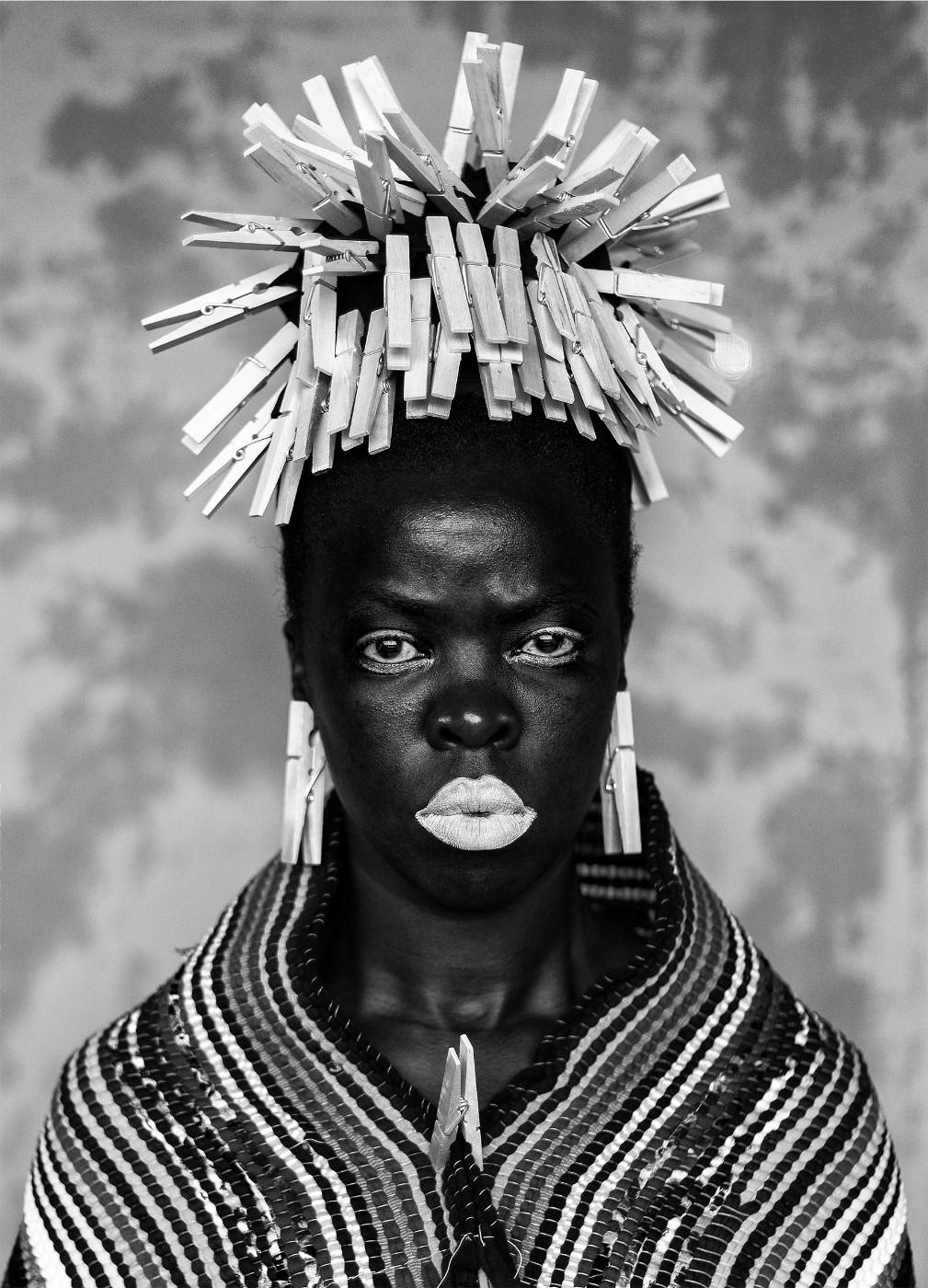 “I’m reclaiming my blackness, which I feel is continuously performed by the privileged ‘other,’” says Muholi. “My reality is that I do not mimic being black; it is my skin, and the experience of being black is deeply entrenched in me. Just like our ancestors, we live as black people 365 days a year, and we should speak without fear.”

From 2014–17, Muholi traveled around the world as part of an ongoing project, staging self-portraits loaded with symbols and moods derived from each location, primarily throughout Europe, North America, and Africa. In over 80 self-portraits, the artist frames their face with ready-made objects and found materials that become transformed into evocative and historically loaded props. Scouring pads, clothespins, cowrie shells, and washing machine tubes signal associations with issues relating to race, gender, labor, global economies, ideas of beauty, and the environment.

A meaningful name for each portrait is given in Zulu, the first language of the artist. In each image, their direct and uncompromising gaze follows you wherever you go. Psychologically charged, these portraits pose critical questions about social justice, human rights, and contested representations of the black body.

ABOUT ZANELE MUHOLI
Zanele Muholi is a visual activist and photographer based in Johannesburg. Muholi co-founded the Forum for Empowerment of Women (FEW) in 2002 and Inkanyiso, a forum for queer and visual (activist) media, in 2009.

Muholi studied Advanced Photography at the Market Photo Workshop in Newtown, Johannesburg, and in 2009 completed an MFA: Documentary Media at Ryerson University, Toronto. In 2013 they became an Honorary Professor at the University of the Arts/Hochschule für Künste Bremen. Most recently, Muholi was bestowed France’s Chevalier de l'Ordre des Arts des Lettres. 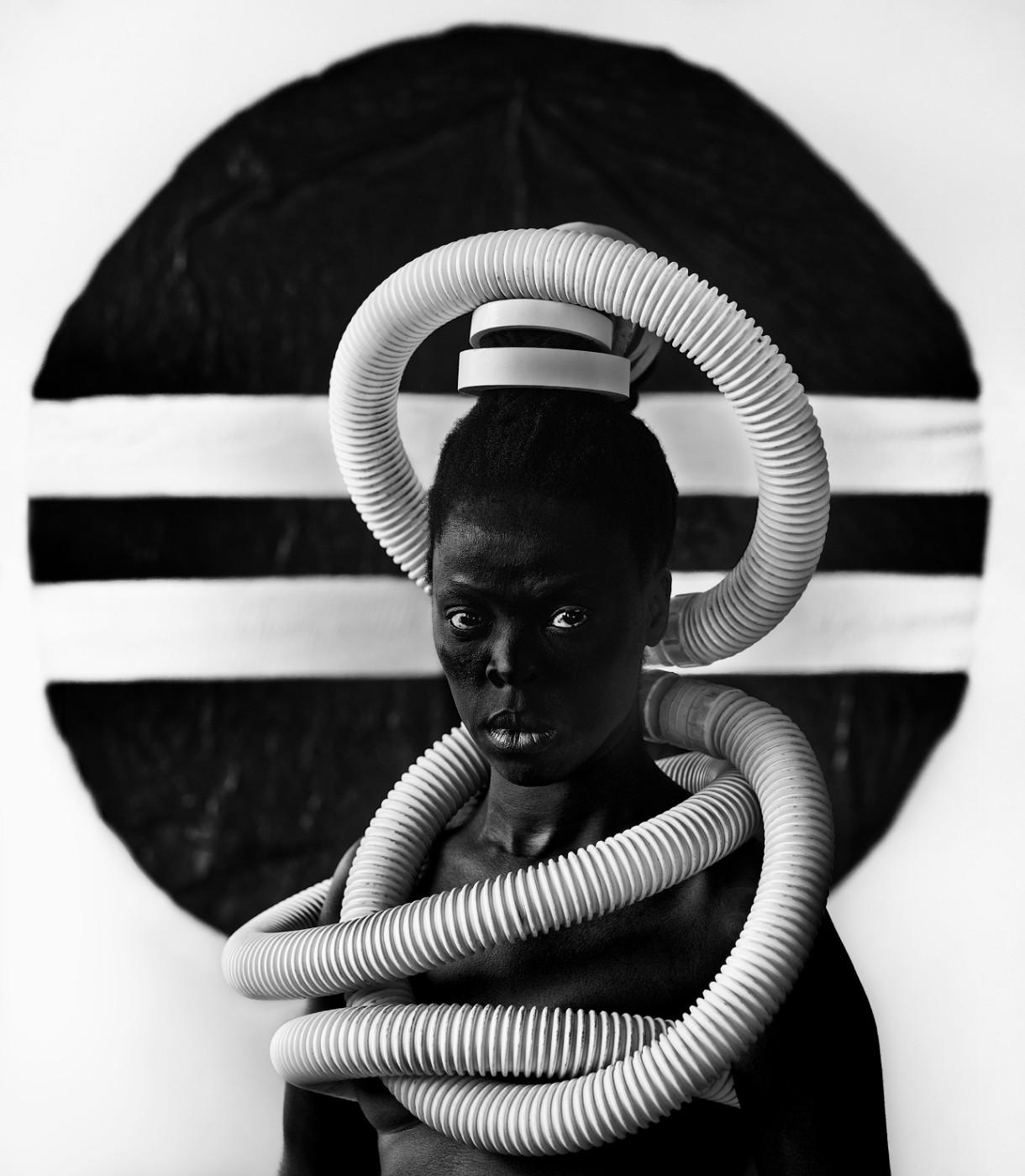 They are included in the main exhibition at the 58th Venice Biennale (2019) and were included in the South African pavilion at the 55th Venice Biennale (2013). They took part in the São Paolo Biennial (2010) and documenta 13, Kassel (2013). The Tate Modern will present a solo show of their work in April 2020. Recent solo exhibitions include the Brooklyn Museum, New York (2015); Rencontres D’Arles (2016); and Stedelijk Museum, Amsterdam (2017). Their photographs are represented in the collections of Centre Georges Pompidou (Paris), the Guggenheim (New York), Museum of Contemporary Photography (Chicago), Tate Modern (London), and South African National Gallery (Cape Town).

Zanele Muholi: Somnyama Ngonyama, Hail the Dark Lioness is organized by Autograph, London and presented in partnership with Seattle Art Museum, and curated by Renée Mussai

ABOUT SEATTLE ART MUSEUM
As the leading visual art institution in the Pacific Northwest, SAM draws on its global collections, powerful exhibitions, and dynamic programs to provide unique educational resources benefiting the Seattle region, the Pacific Northwest, and beyond. SAM was founded in 1933 with a focus on Asian art. By the late 1980s the museum had outgrown its original home, and in 1991 a new 155,000-square-foot downtown building, designed by Venturi, Scott Brown & Associates, opened to the public. The 1933 building was renovated and reopened as the Asian Art Museum in 1994. The building is currently undergoing a renovation and expansion with a scheduled reopening in fall 2019. SAM’s desire to further serve its community was realized in 2007 with the opening of two stunning new facilities: the nine-acre Olympic Sculpture Park (designed by Weiss/Manfredi Architects)—a “museum without walls,” free and open to all—and the Allied Works Architecture designed 118,000-square-foot expansion of its main, downtown location, including 232,000 square feet of additional space built for future expansion. The Olympic Sculpture Park and SAM’s downtown expansion celebrated their tenth anniversary in 2017.

ABOUT AUTOGRAPH
Autograph is an arts charity based in London, UK, that shares the work of artists who use photography and film to highlight issues of identity, representation, human rights, and social justice. More at autograph.org.uk.