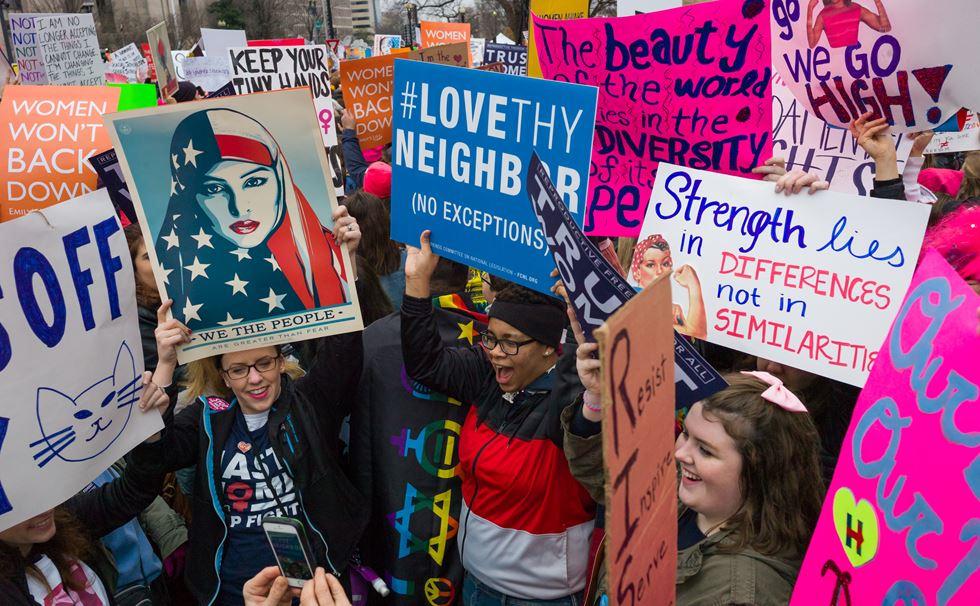 The exhibition examines the political graphic design of a turbulent decade

Alongside traditional posters and banners, it charts the rise of digital media and social networking, which have given graphic iconography an extraordinary new reach

The global financial crash of 2008 ushered in a politically volatile decade. At the same time, the rise of social media has changed the way graphic political messages are made and disseminated. As traditional media rubs shoulders with hashtags and memes, the influence and impact of graphic design has never been greater. "Hope to Nope: Graphics and Politics 2008-18" examines the pivotal role of graphics in milestone events such as the election of Barack Obama, the worldwide Occupy movement, the Arab Spring, Brexit and Donald Trump’s presidency.

Taking a politically impartial view of such events, the exhibition demonstrates graphic design’s role in influencing opinion, provoking debate and driving activism. It explores the trajectory from ‘Hope’ to ‘Nope’, as represented by the iconic Barack Obama ‘Hope’ poster by Shepard Fairey and the many imitations that followed, including the Donald Trump ‘Nope’ meme. The exhibition demonstrates how technology and graphic design are weapons wielded by the powerful and the marginalised alike.

"Hope to Nope" comprises three main sections: Power, Protest and Personality. A large graphic timeline dissects the gallery, charting the role of new communication technologies such as Facebook and Twitter in global events of the last decade.

Power explores how graphic design is used by the establishment to assert national and political authority, and how that iconography can be subverted by activists and opponents. Examples include North Korean propaganda, the Hillary Clinton presidential campaign, Soviet posters turned into a gay rights campaign and Dread Scott’s flag in support of the Black Lives Matter movement. Also featuring is a 3m-high replica of the letter ‘N’ from the ‘Newborn’ sculpture that marked Kosovo’s independence from Serbia in 2008.

Protest displays graphic design by activists and demonstrators. The largest section in the exhibition, it includes newspapers from the 2011-12 Occupy London camp, an umbrella used during the 2014 Hong Kong ‘Umbrella Revolution’ and a 2m-high replica of the inflatable duck from the 2016 protests against Brazilian president Dilma Rousseff. This section also looks at the 2015 Je Suis Charlie and Peace for Paris marches, as well as responses to the 2017 Grenfell Tower disaster, demonstrating the important role played by graphic design in channelling anger and creating solidarity.

The final section, Personality, examines the graphic representation of leading political figures. Grassroots support for Jeremy Corbyn is typified by an unofficial Nike t-shirt and an independently published comic book that portrays the Labour Party leader as a super-hero. Meanwhile, Donald Trump’s trademark features are caricatured across the covers of more than 50 international magazines, including The Economist, TIME and Der Spiegel.

In contrast to such personalities, this section also features the international hacktivist network Anonymous, which protects individual identities behind a smiling Guy Fawkes mask. Originally drawn by David Lloyd for the V for Vendetta graphic novel, the mask has evolved into a symbol of resistance worldwide. A newly commissioned piece by Pulsar Platform provides a dynamic visual profile of leading political figures based on public opinion across social media platforms.

"Hope to Nope" is co-curated by the Design Museum and GraphicDesign&’s Lucienne Roberts and David Shaw, with Rebecca Wright.

About the Design Museum:
The Design Museum is the world’s leading museum devoted to architecture and design, its work encompasses all elements of design, including fashion, product and graphic design. Since it opened its doors in 1989 the museum has displayed everything from an AK-47 to high heels designed by Christian Louboutin. It has staged over 100 exhibitions, welcomed over five million visitors and showcased the work of some of the world’s most celebrated designers and architects including Paul Smith, Zaha Hadid, Jonathan Ive, Miuccia Prada, Frank Gehry, Eileen Gray and Dieter Rams. On 24 November 2016, The Design Museum relocated to Kensington, west London. Leading architectural designer John Pawson has converted the interior of a 1960s modernist building to create a new home for the Design Museum giving it three times more space in which to show a wider range of exhibitions and significantly extend its learning programme.