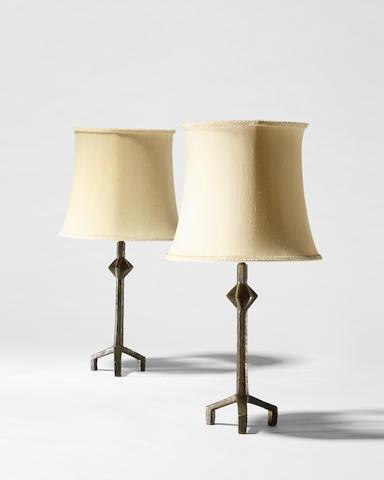 New York – A pair of table lamps by Alberto Giacometti were the top lot of the Bonhams Modern Decorative Art + Design auction on December 14. The sale realized $1,542,625 and was marked by incredible prices achieved for classic early 20th century designers and robust international activity for post-war design material.

"We saw some very strong results, especially with the beautiful fresh-to-market Giacometti lamps that inspired competitive bidding from all corners of the world and also had lots of domestic interest for the rare early works by Samuel Yellin. We are also pleased with the record price achieved for the exceptional set of six window panels by George Grant Emlsie, which were a showstopper during the view," said Benjamin Walker, Head of Department, Modern Decorative Art & Design.

The elegant pair of Giacometti Étoile table lamps realized $225,000 and a single Giacometti floor lamp achieved $162,500. Both sets were commissioned by renowned minimalist interior designer Jean Michel Frank, and echo the elongated artistic style found in Giacometti's sculptures. All the top ten lots beat their low estimates in the sale, which sold 69% by lot and 80% by value.

View all the lots in this auction.
Tags
Decorative Art
Bonhams